Arp 1 is obviously the first entry in his catalog and falls under the classification: Spiral galaxies: Low surface brightness. It is classed as an SC spiral. The other low surface brightness galaxies in his catalog are all small irregular dwarf galaxies of the Magellan class. This is the one exception. It is about 230 million light-years distant and is in the front leg of Ursa Major. Thus nearly twice as distant as Arp 285 and therefore a far larger galaxy. Though Arp has always argued against redshift data as a distance indicator, making him a maverick or crackpot depending on your point of view. While it is of low surface brightness it was still much easier to image than Arp 2 was. In fact, I was imaging Arp 285 not even realizing it would be in the same field of view. If I had, I\'d have moved it down a bit to better frame both objects. It appears to be a rather classic two arm spiral except the arms are thinner than normal. Also, it has a very small core only a few seconds of arc across that is far brighter than the rest of the galaxy. I found no detail in the core, just an evenly bright star ball of population 2 stars. Those are stars that have low \"metal\" content having been formed for the most part about the same time the galaxy was born, likely over 10 billion years ago. Thus only yellow, orange and red stars still survive giving it the typical color of a galaxy core. The arms, like in most spirals, are composed of population 1 stars like our sun that have been formed long after the galaxy was formed. Those giving the arms their blue color are likely only a few 10\'s of millions of years old, up to a thousand times younger than those in the core. It was discovered by R. J. Mitchel on January 9, 1856.

Arp\'s photo of this galaxy with the 200\" telescope is at:
http://ned.ipac.caltech.edu/level5/Arp/Figures/big_arp1.jpeg
His only comment deals with the image. He says of it: \"High-contrast print of low surface-brightness spiral.\"

This is an interacting pair of galaxies that are rather widely separated. The upper is NGC 2856 and the lower NGC 2854. Arp classed the pair under: Group Character: infall and attraction. I don\'t know what he saw that caused this classification, maybe it is the odd linear feature appearing to spear NGC 2856. Arp referred to it saying; \"Narrow tail leads away from north nucleus.\" Redshift shows an approximate distance of 130 million light-years and is seen in the front leg of Ursa Major.

Each shows some hint of interaction. Obviously, there\'s that \"narrow tail\" which actually came from NGC 2854 per the paper cited below. Also, notice that there are tidal tails coming off both arms of NGC 2854. The southern one looks a bit like \"smoke\".

A paper by Beverly Smith talks about the \"narrow tail\" from NGC 2856 to use Arp\'s term. It is not a jet at all. Here\'s an excerpt from her abstract.

\"This system contains a striking example of \"beads on a string\": a series of star-formation complexes ~1 kpc apart. These \"beads\" are found in a tail-like feature that is perpendicular to the disk of NGC 2856, which implies that it was formed from material accreted from the companion NGC 2854. The extreme blueness of the optical/UV colors and redness of the mid-infrared colors implies very young stellar ages (~4-20 Myr) for these star-forming regions. Spectral decomposition of these \"beads\" shows excess emission above the modeled stellar continuum in the 3.6 Ľm and 4.5 Ľm bands, indicating either contributions from interstellar matter to these fluxes or a second older stellar population. These clumps have  12.0 < M B<  10.6, thus they are less luminous than most dwarf galaxies. Our model suggests that bridge material falling into the potential of the companion overshoots the companion. The gas then piles up at apogalacticon before falling back onto the companion, and star formation occurs in the pile-up. There was a time delay of ~500 Myr between the point of closest approach between the two galaxies and the initiation of star formation in this feature.\" The full paper is available free at the link below.
http://arxiv.org/abs/0803.4218
Images:
http://www.etsu.edu/physics/bsmith/research/sg/arp285/arp285.html
Beads on a string image:
http://www.etsu.edu/physics/bsmith/research/sg/arp285/arp285clumps_labels.jpg
This may also explain Keenan\'s System, Arp 104.

The two galaxies were discovered by William Herschel on March 9, 1788. Neither made either of the Herschel 400 observing programs.

Other galaxies in the image:

East of Arp 1 the larger slightly orange elliptical like galaxy is the much bigger and brighter CGCG 238-051 with no red shift data.

Eastward to the edge of the image is a pair of galaxies known as CGCG 238-053. Oddly only the easternmost one has red shift data. That indicates a distance of 380 million light-years. The western galaxy looks distorted with a drawn out arm. It appears they may be an interacting pair.

Nearly due east of the above pair is the very orange galaxy SDSS J092456.78+490746.6. Usually such a color indicated a great distance and that\'s the case here with a red shift distance of about 2.2 billion light-years. 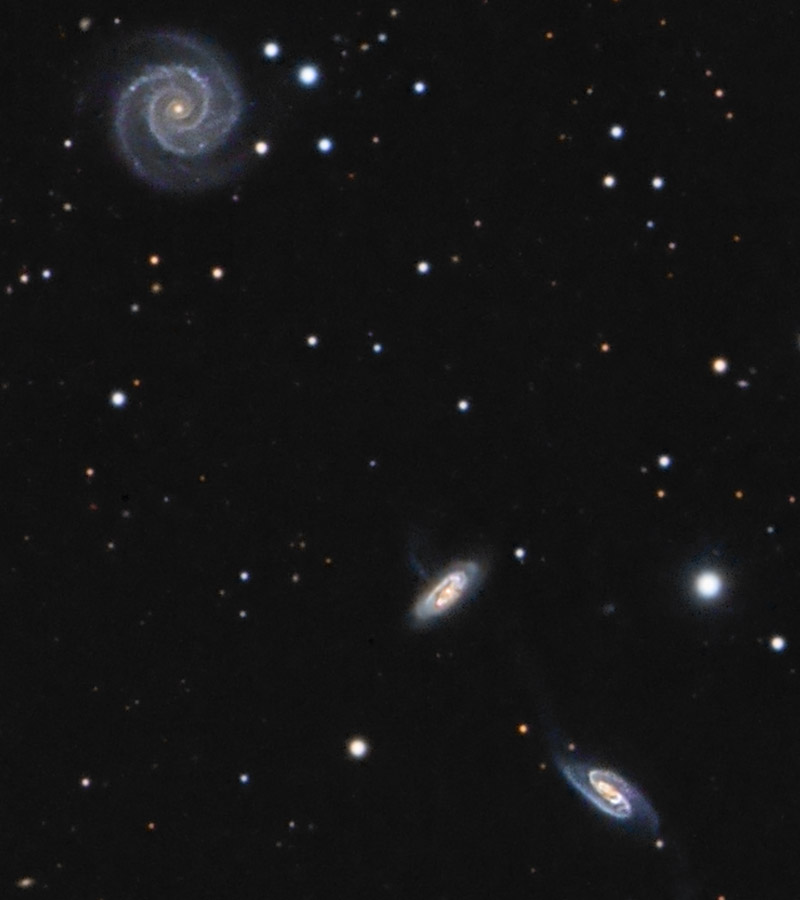 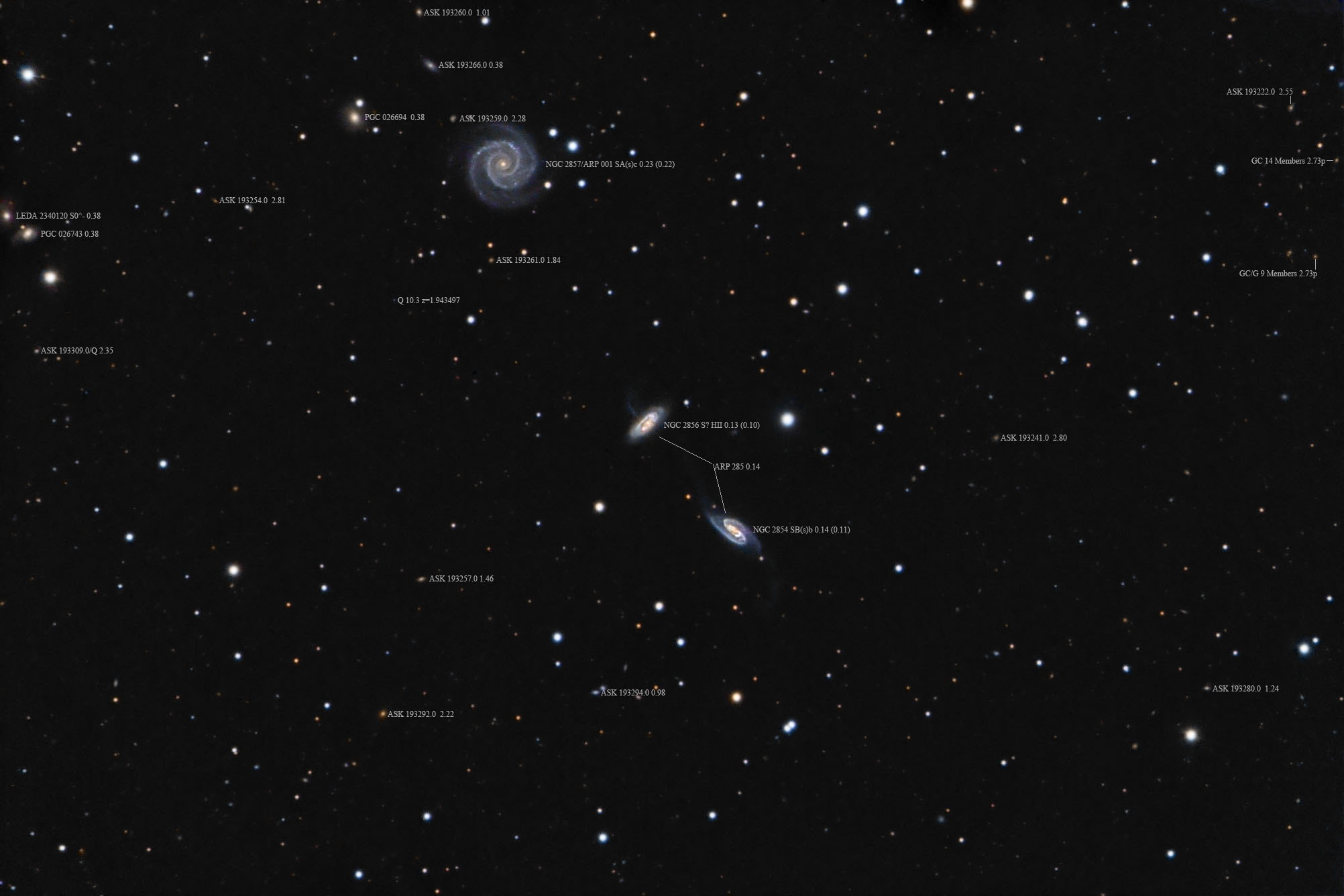 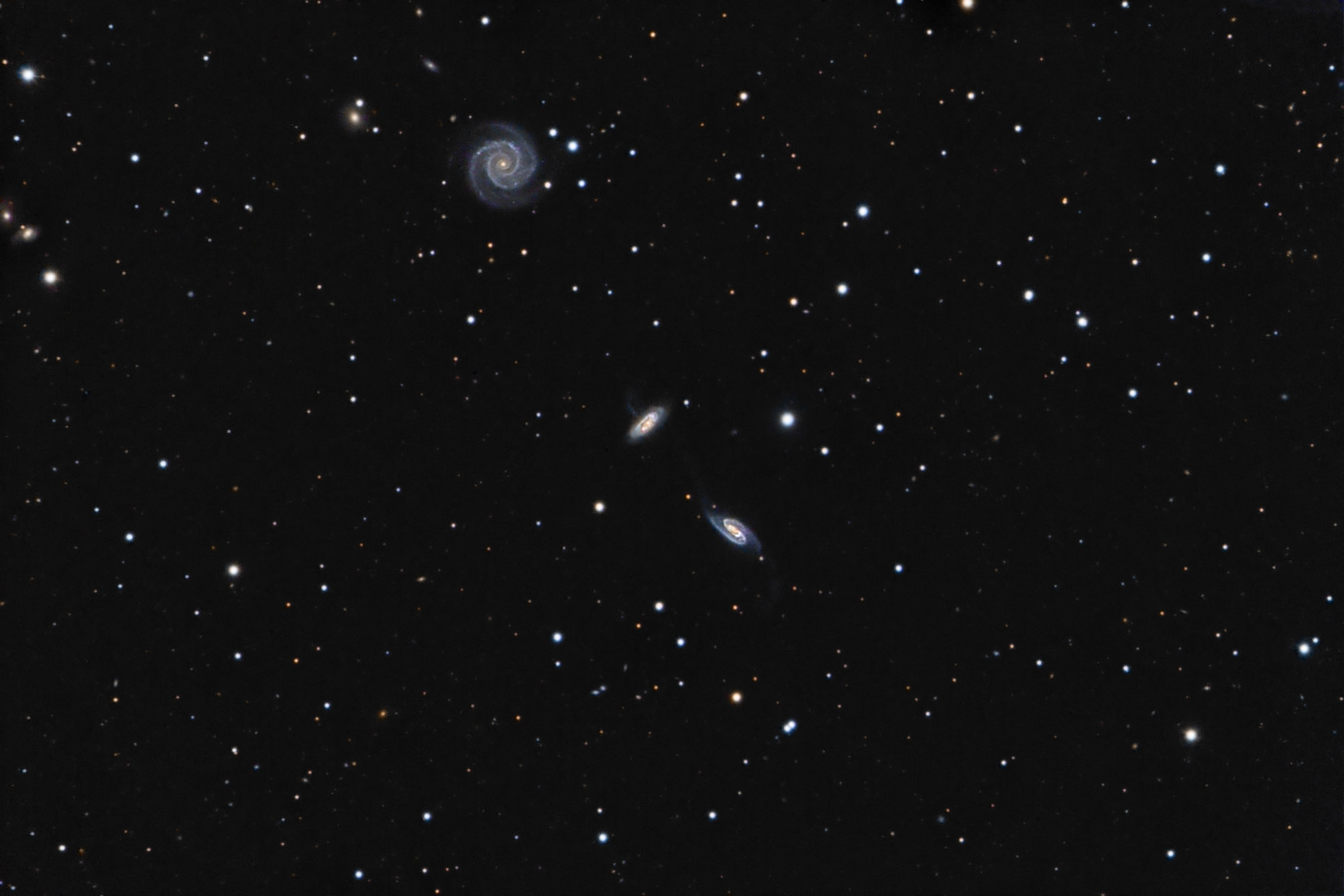