Arp 10 is in Arp\'s category Spiral galaxies: Split arm. It is located in Cetus about 400 million light years distant. While it appears to have a companion just to the north that galaxy, 2MASX J02182874+0540079, is over 700 million light years further away (1.15 billion total). But it apparently does have a companion. To me, it looks like a star, even on the SDSS image. It is the starlike object right beside the core to the southwest (lower right). It is identified in NED as ARP 010:[BMV2007] Companion with a redshift that puts it about 420 million light-years away. Arp\'s comment, \"Nucleus off center in ring.\" I can\'t say I see the \"split arm\" that caused Arp to put it in that category. Is it the ring that is more a slight oval coil that doesn\'t quite overlap? Is it the faint arms at the southeast that seem to go in opposite directions? Or is it something else? Arp doesn\'t explain.

While NED lists the starlike object near the core of Arp 10 as a companion it gives it the classification of Sab? How you get that out of a starlike object is beyond me. NED classes Arp 10 itself as only S?. Looks like a barred spiral with a ring to me. To add to the confusion one paper wonders if the brightest blob in the very blue arc in the northwest part of the galaxy is the core of a second galaxy. In other words, this object is still very much a mystery with all sorts of contrary information that has me going in circles. While not all the papers agree, to me this looks at least like a near head-on collision of two galaxies. If that starlike object is the core of the \"bullet\" galaxy it apparently lost most of its stars in the process and is now just a core. This could explain the apparent clockwise and counterclockwise shape of the faint arms on the southeast side of the galaxy\'s disk. Being so face on it may be difficult to tell if the stars really are orbiting in opposite direction. I found nothing indicating any measurements have been done. I\'d expect radio telescopes to be best for this chore. One note at NED has this to say about this system:

\"Faint \"ripples\" are seen at very faint levels around the galaxy. These ripples complicate the simple interpretation of Arp 10 as a collisional ring. Recent H I observations by Charmandaris & Appleton(1996) show that the bright inner ring is surrounded by an H I disk which extends beyond the faint \"ripples.\" Although not as simple as ring galaxies like VII Zw 466, Charmandaris and Appleton suggest that the process that formed the rings and shells involved a central collision between a gas-poor early type galaxy and a large-type H I rich disk.\"

The full article is available for those with good hip waders at
http://articles.adsabs.harvard.edu/cgi-bin/nph-iarticle_query?1997AJ....113..201A&data_type=PDF_HIGH&whole_paper=YES&type=PRINTER&filetype=.pdf

The field\'s data has not yet been entered into NED\'s database even though the field has been imaged by the SDSS. So there\'s little information on the rest of the field. In fact, I\'ve already covered all objects with a known redshift in NED\'s database. Normally I\'d not prepare an annotated image for such a weak field but there\'s an asteroid that was caught right as it went from normal to retrograde motion. It appears as a faint star with no trail visible as it moved only a bit over one arc second during the exposure. It is 2004 FD41 at magnitude 20.6. So it won\'t be obvious without it being pointed out. The other asteroid (8604) Vanier is very easy to spot at magnitude 16.8 to the right of Arp 10. It is so bright it even shows in the color filtered images making a short blue-green and red trail before the white trail from the luminosity image. It is moving in normal eastward motion rather than retrograde as most asteroids I pick up earlier in the evening do.

Without any distance indicators, I\'ve marked all galaxies with their catalog entry instead. There are so few cataloged I\'m listing every one known to NED along with the red shift distances to the three main ones. There is one galaxy cluster in the image. A line goes to the approximate center identified in NED. No size or galaxy count is given, nor distance of course. I do see lots of faint fuzzies in the area but nothing out of the ordinary except for a small concentration to the NW of that position containing very faint small fuzzies. Enlarge the image for a better view.

While the Hubble Space Telescope imaged quite a few galaxy collisions this wasn\'t one of them. 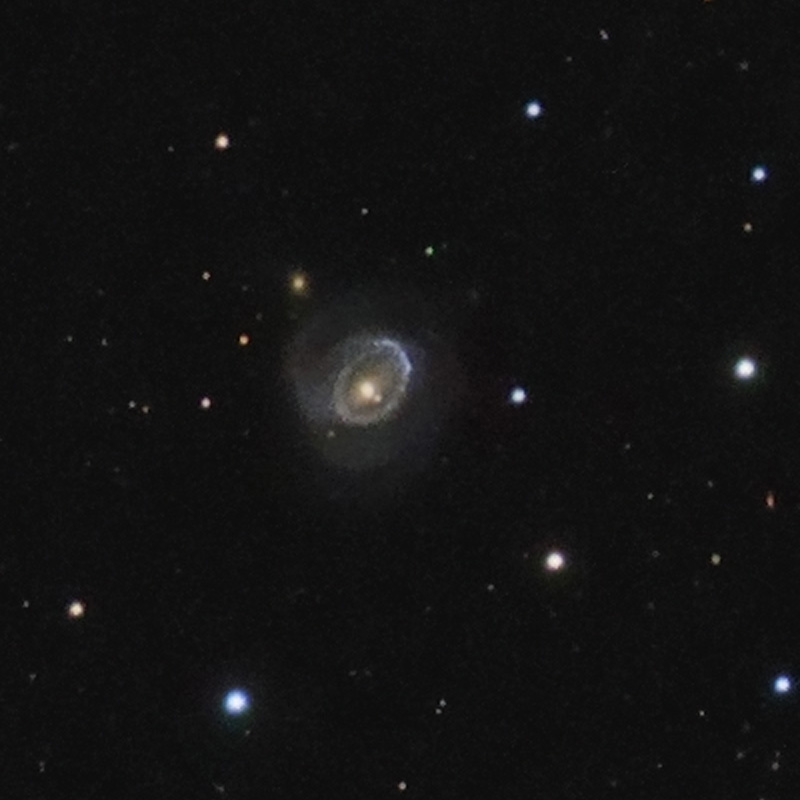 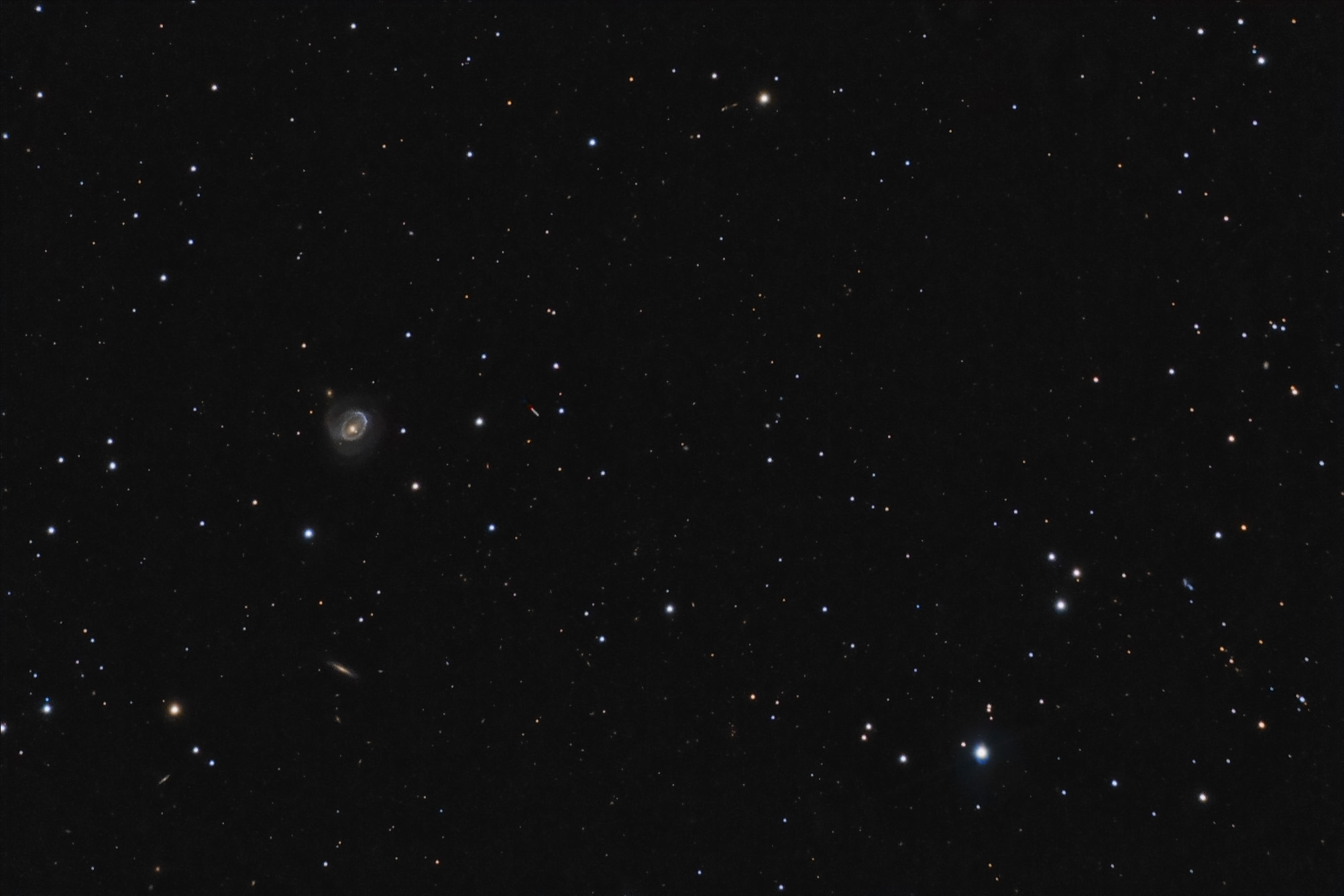 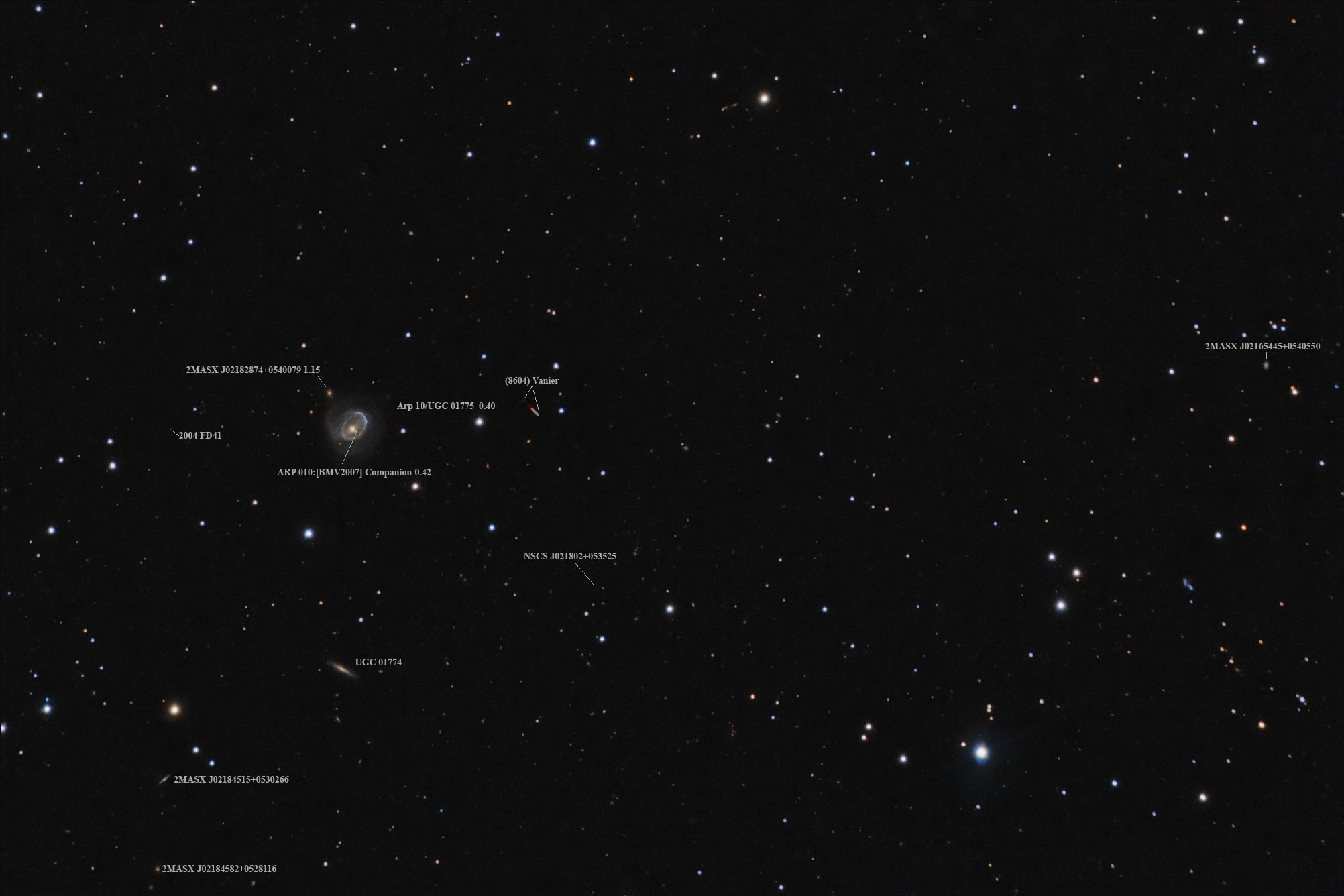