Arp 21 is located in eastern Leo Minor a bit over 400 million light-years distant. It falls into Arp\'s class: Spiral Galaxies; 3 armed. That much seems fairly certain. Things get rather fuzzy beyond this. For instance, where\'s the third arm? I really don\'t see a definite third arm in his image, my image or the Sloan image. Is it the fuzzy detached spur running parallel to the arm wrapping around the bottom of the core ending to the north by a round object? Or is the odd looping feature east of the south going arm that is strangely drawn-out ending in a sudden backward \"j\" shape? Arp made no comment on this one. NED does say it is a three-armed spiral. It just classes it as a spiral, however.

Now about that \"round object\" northeast of the core. The SDSS has two entries for it. One calls it a star while the other says it is a galaxy with a redshift also about 400 million light-years distant. Arp 21 is in the Vorontsov-Velyaminov Interacting Galaxies catalog as VV552b. That would indicate they too considered that object a galaxy. Now about that \"b\"; where\'s VV552a you ask? Nearly 4 hours west and 17 degrees north! Confusing isn\'t it? VV552? It apparently doesn\'t exist. The catalog has no separate entry for the round object. I used the galaxy designation and distance in my annotated image.

Arp 21 was picked up by IRAS so is a strong IR emitting galaxy indicating a lot of star formation is going on hidden behind dust warmed by the stars it hides. This makes it likely the galaxy did encounter another in the recent past. It might be the round object or one of the other galaxies in the area.

Looking around the area, even in the limited field of the cropped, enlarged image, there\'s a lot of distorted galaxies. Near the right edge of the cropped image is a red spiral that has a faint plume going north. In the lower left corner is a ring galaxy much like M94 with its very faint outer ring. Both would seem to be due to long ago encounters. There\'s an obvious pair of red elliptical interacting galaxies northeast of Arp 21. At the top are two, very blue, interacting galaxies. They have one entry in a rather obscure catalog, MAPS-NGP O_318_0293285. That stands for Minnesota Automated Plate Scanner - North Galactic Pole. Minnesota and North Pole describe my winter perfectly. Looking around the full image will turn up others. This is a very interesting field. Unfortunately, I found virtually no papers on any of the objects, including Arp 21. Seems oddly ignored in the literature. 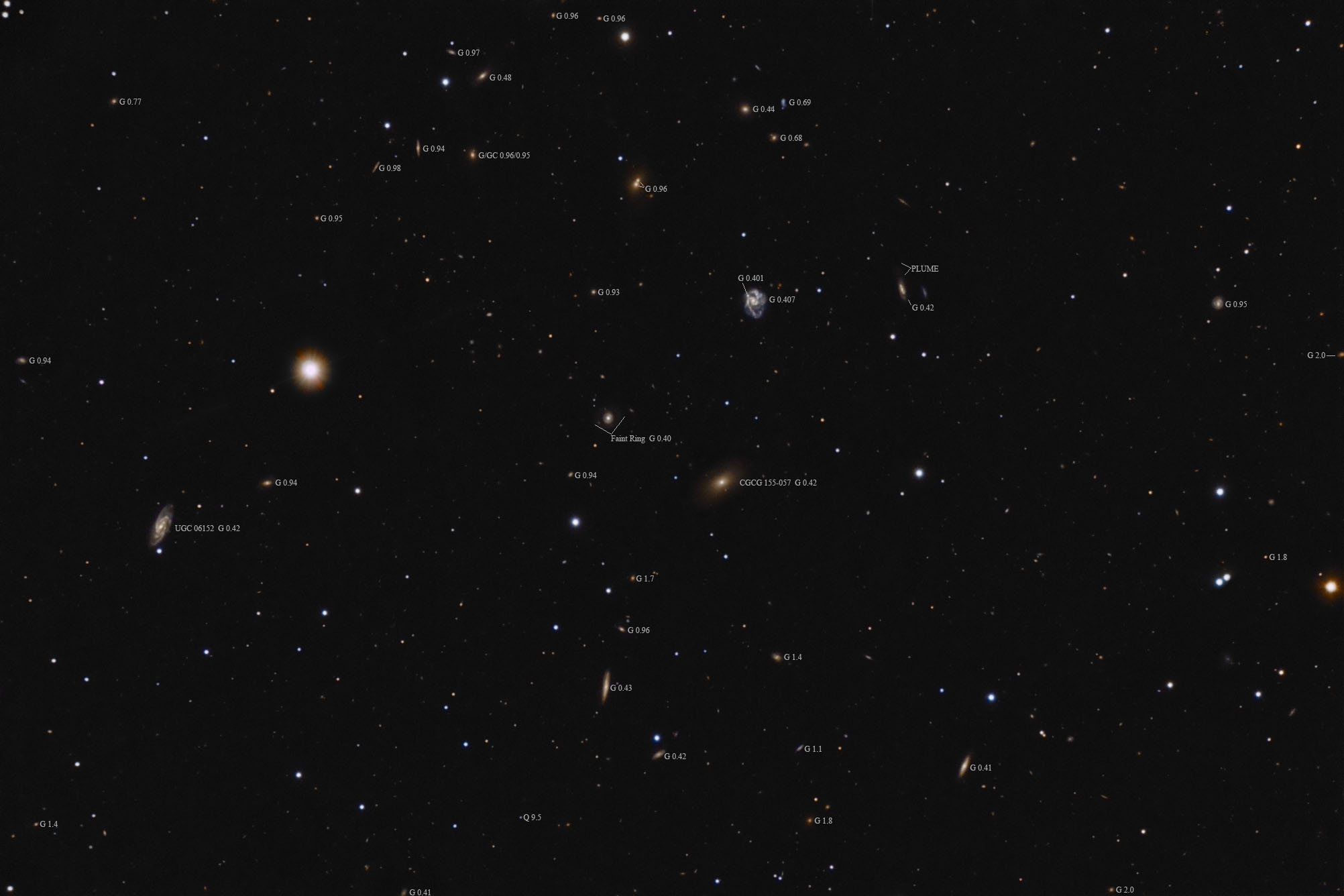 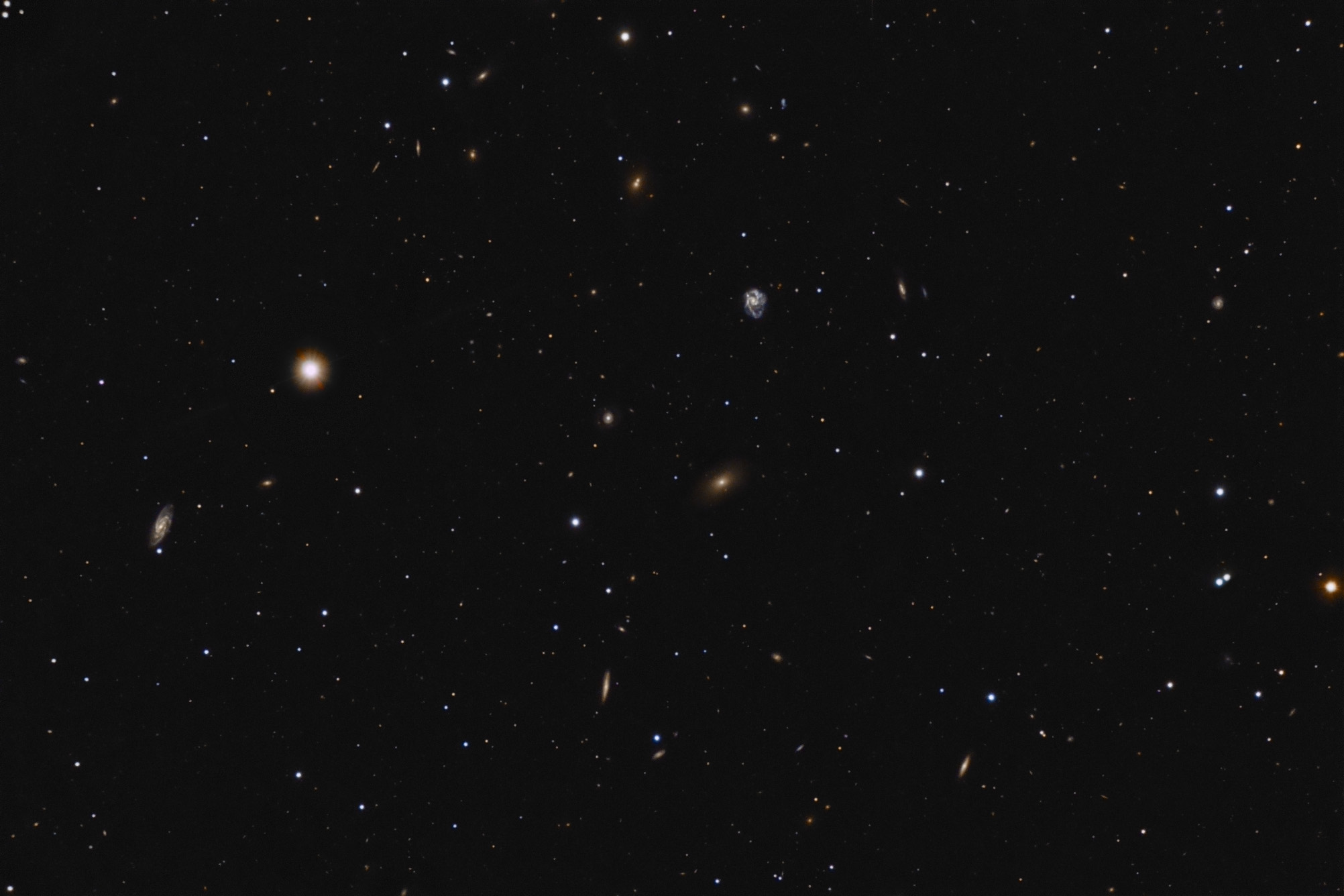 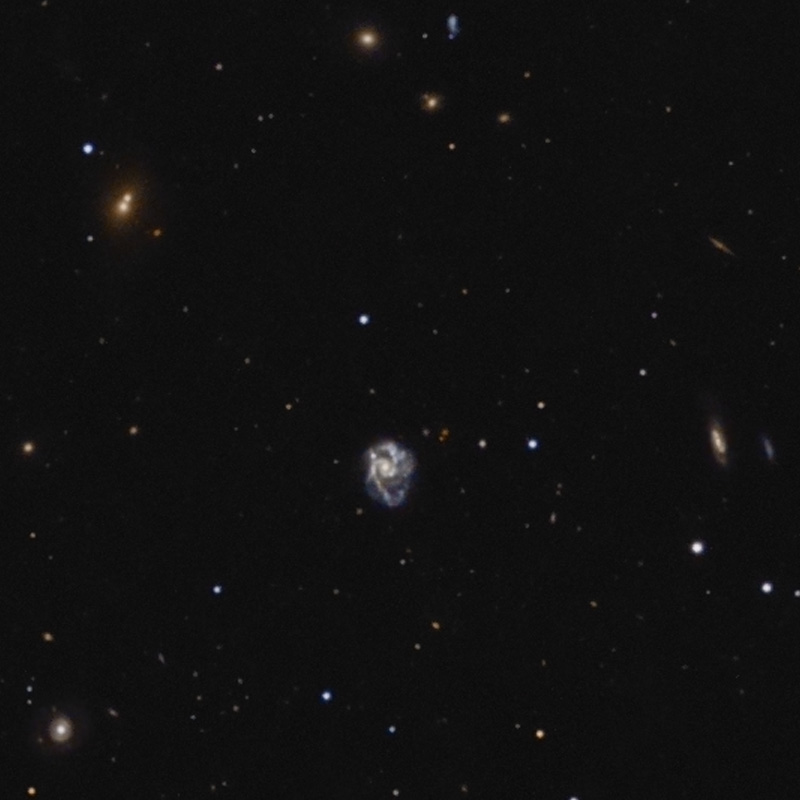