While this is a nice trio of galaxies Arp 34 is only NGC 4615 the big blue one as it is classed by Arp as: Spiral Galaxies, Integral sign. To me, none of his integral sign galaxies are all that close to the appearance of the sign. To me, this one looks more like an upside down double stinger scorpion. I think he was mainly interested in the long drawn out arms. In this case NGC 4615 is a starburst galaxy as indicated not only by its vivid blue color but also by its intense IR emission indicating there are far more stars being born in this galaxy but they are hidden behind their dusty cocoons which emit strongly in IR light as that\'s the only frequency that can escape the dust. Its official classification is Scd. The other two galaxies are NGC 4614 the odd barred spiral with two arms that seem to form a near perfect ring. Note that on the SW side a faint outer arm is visible. NED classes it as SB0. NGC 4613 is the smallest of the three and is classed as Sa by NED and a lenticular galaxy (S0) by a note at NED. Sa seems to better fit my image. All three are located about 230 million light-years away and do form a true group. which, if either, caused the distortions in NGC 4615 and threw it into starburst no one sees to know. Neither seems all that distorted as you\'d expect after such an encounter. Maybe it was yet another galaxy out of my field. Arp 34 as well as the other two NGC galaxies in the image, 4613 and 4614, were discovered by Heinrich d,Arrest on May 9, 1864.

This note at NED about the three galaxy system is interesting:
\"RSCG 64.-RSCG 64 is a very tight system (<20 kpc in radius) with a low velocity dispersion ({sigma}_RSCG_ = 111 +/- 74 km s^-1^). The system is near the edge of a small apparent void. Only five galaxies within the entire region are roughly coincident with the RSCG in velocity space, and the nearest of these is 560 h^-1^ kpc away from the RSCG center. RSCG 64 is probably an isolated, gravitationally bound system. No signs of tidal interaction are evident.\" So they can\'t find the cause of the starburst activity either.

Follow a line from NGC 4615 through NGC 4613 then on to an orange star a bit fainter than the one on top of NGC 4613. Go the distance between NGC 4613 and that orange star. That brings you to the center of a very distant galaxy cluster NSC J124121+260545 a bit over 3 billion light years distant. If I blow up that area I see a bunch of very faint galaxies and a few brighter ones in the area. The cluster itself though is hard to define. NED gives little information on it.

A bit west of NGC 4613 and north you come to a bright somewhat orange star. It is about in the center of another galaxy cluster, NSCS J124121+261031 at 4.5 billion light years. 28 galaxies are listed as being in the cluster. I see far more on either side of this star arranged in two clumps one to the east and one to the WSW of the star. But there are far more than 28 in either of the clumps.

The eastern clump is a quite long group heading east. Toward the far end of this large clump of galaxies is the location of yet another galaxy cluster, NSCS J124153+261101 at 2.6 billion light years. It has 18 members. Again I see too many. The galaxy counts may have been made from the POSS plates. I am going much deeper than they do so this may explain the excess.

I\'m not done with galaxy clusters in the image! Follow the line from NGC 4615 through 4613 and on to the first bright blue star. That marks the area of yet another galaxy cluster that appears to be at the SW end of a band of galaxies and galaxy clusters. It is NSCS J124108+260838. It is listed as containing 41 members, more in line with what I see on my image, and is 4 billion light years distant.

The asteroid in the image is (46920) 1998 SX12 MAG 17.9 Color data was taken between to luminosity sessions so the trail is broken. It is near the top right of center and is aimed at a somewhat blue galaxy that also appears as a short streak.

All three galaxies were discovered by Heinrich d\'Arrest on May 9, 1864. 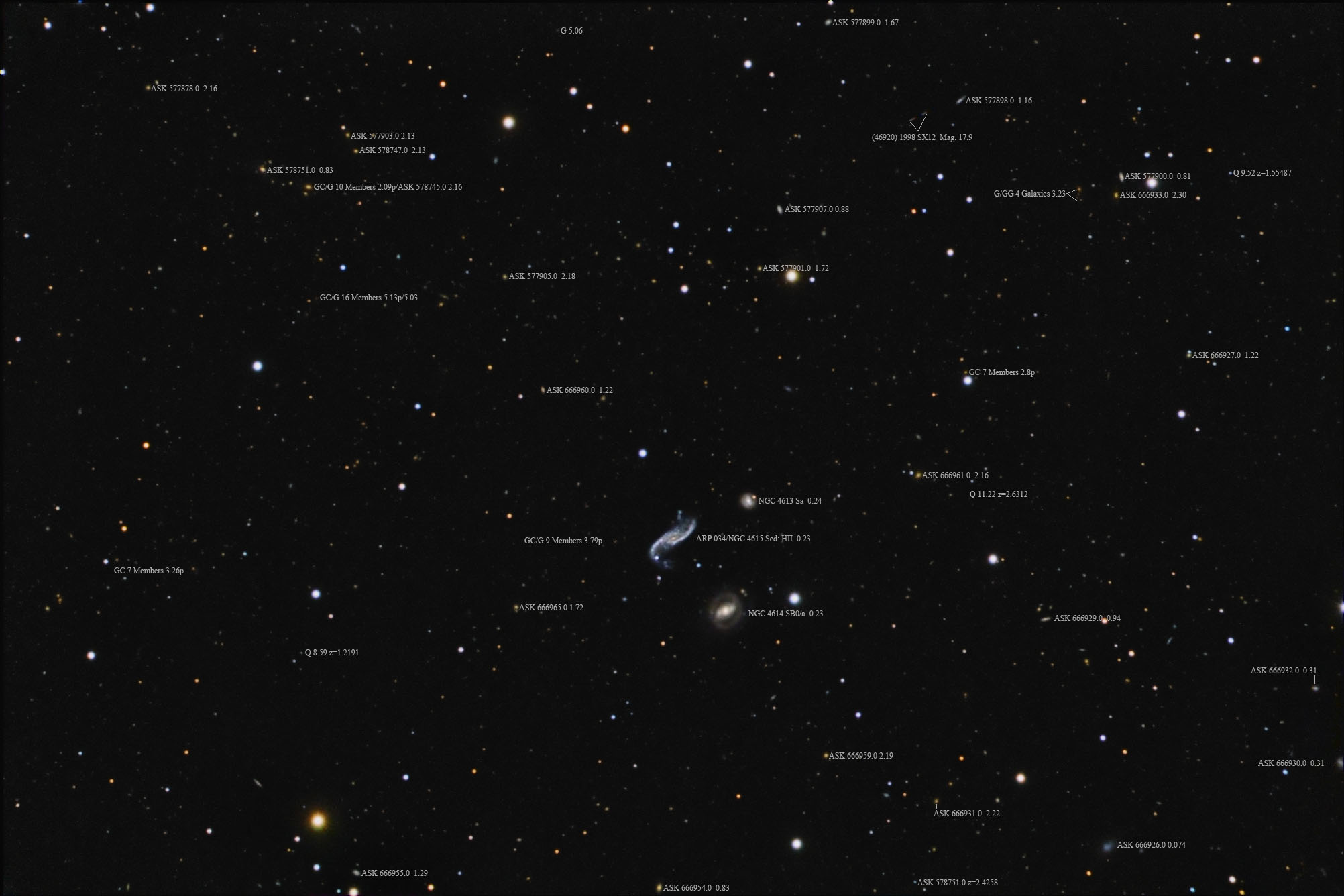 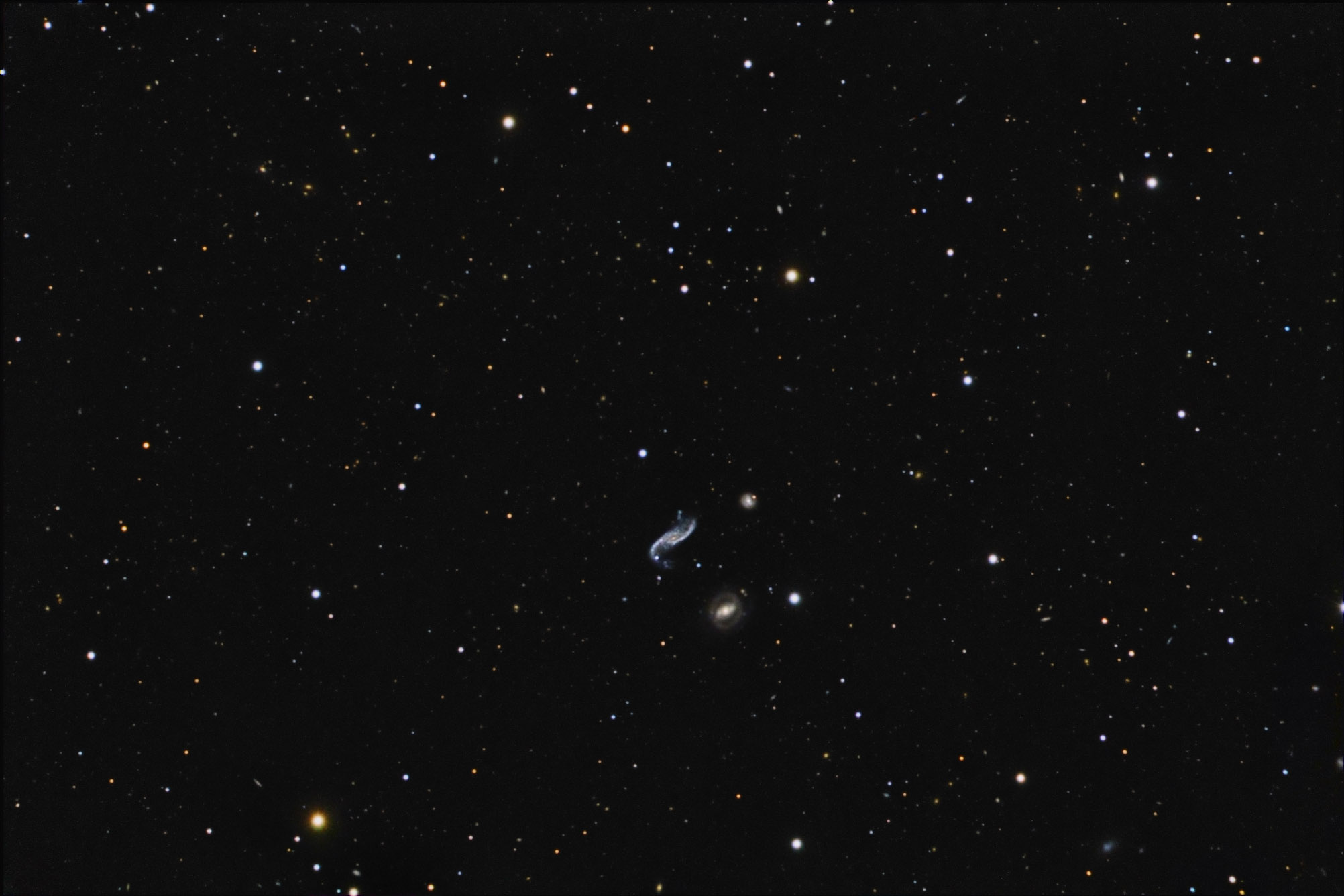