Another twofer deal in Arp galaxies located in Canes Venatici, about 3 degrees northeast of M3. Arp 183 on the left is UGC 8560 and Arp 36 on the right is UGC 8548. Both are about 240 million light-years distant. Both appear highly distorted yet are cataloged very differently by Arp. This image was taken through some haze for 4 of the 6 luminosity frames so doesn\'t pick up the faint parts of the galaxy as well as I\'d have liked. Another I should revisit but probably won\'t.

Arp 183 is in Arp\'s class of galaxies with narrow filaments. Apparently he is referring to the very faint spur above the apparently drawn out arm. At least that\'s what his comment probably refers to when he says: \"3 faint patches constitute third arm or filament.\" The patches are better seen in his image. The two galaxies along the long drawn out arm of Arp 183 are SDSS J133451.48+312306.9 of unknown distance and 2MASX J13345139+3123014/SDSS J133451.36+312301.3 at 1.5 billion light-years. The latter is obviously not related to Arp 183. The former, if at the same distance as Arp 183 seems way too small to be involved. NED classes Arp 183 as an Sb spiral about 240 million light-years distant. The best candidate for what distorted Arp 183 is nearby Arp 36 which is also apparently distorted.

Arp 36 is, like Arp 183 about 240 million light-years distant. It is classed as SB? Arp put it in his Spiral Galaxies: Integral sign class. Though it makes a rather poor integral sign to me. His comment: \"Knots in arms approach appearance of small companion.\" I would certainly agree with that comment. In fact, some catalogs do list the brightest knot in the eastern (left) arm as a separate object. Oddly, a note at NED under Arp 36 actually refers to Arp 183 when it says: \"SB with a double companion at the end of the single developed arm.\" As shown above, at least one of these \"companions\" is a distant background galaxy. Another note, this one on Arp 36 asks the question \"Two cores?\" I don\'t think so. This other bright object seems, in my image, to be a blue knot of new massive stars at the end of the western bar where the arm starts. There\'s a similar dimmer one at the start of the eastern. Several others are visible as well. Such massive star formation is common in near galaxy collisions as may have happened here. Both galaxies certainly show this effect.

The tight trio of galaxies below Arp 36 consists of WAS 75 at about a half billion light-years and 2MASX J13341649+3117095 at about three-quarters billion light-years. The third galaxy is SDSS J133417.21+311718.0 distance unknown. Below is small S0 like spiral SDSS J133417.57+311645.5 also distance unknown. The two with unknown distances are labeled with a question mark. West of this group is a pair of very red objects. The bright one is 2MASX J13340124+3117057 at 1.5 billion light-years. The SDSS catalog lists the western one as a 20th magnitude star. Its PSF doesn\'t look like a star in my data. Looking at the SDSS image I tend to doubt the star label but that\'s what I\'ve labeled it in the annotated image. It could be the halo of the galaxy is causing the confusion so I\'ll reluctantly defer to the SDSS.

Below the above galaxies is, the IR strong galaxy 2MASX J13341158+3114204 at 1.5 billion light-years. It is classed as S0. It\'s very unusual for an S0 galaxy to have the star formation in its core needed to reach the level of an IR galaxy. Also, it must be huge to appear so large at such a distance. A quick calculation assuming it is fully face on to us puts it at about 160 million light-years in long diameter. I can\'t recall an S0 galaxy that large. Sure would like a closer look at this one.

There\'s one asteroid in the image, (239730) 2009 BL170 at an estimated magnitude of 19.4. It is moving in pro-grade motion rather than retrograde as it was taken early in the morning. It also shows how conditions improved during the image. The first part of the trail (long part) is dimmer than the shorter later luminosity images. Dawn was breaking so I couldn\'t get any more and never went back. The gap is due to the taking of the color frames. 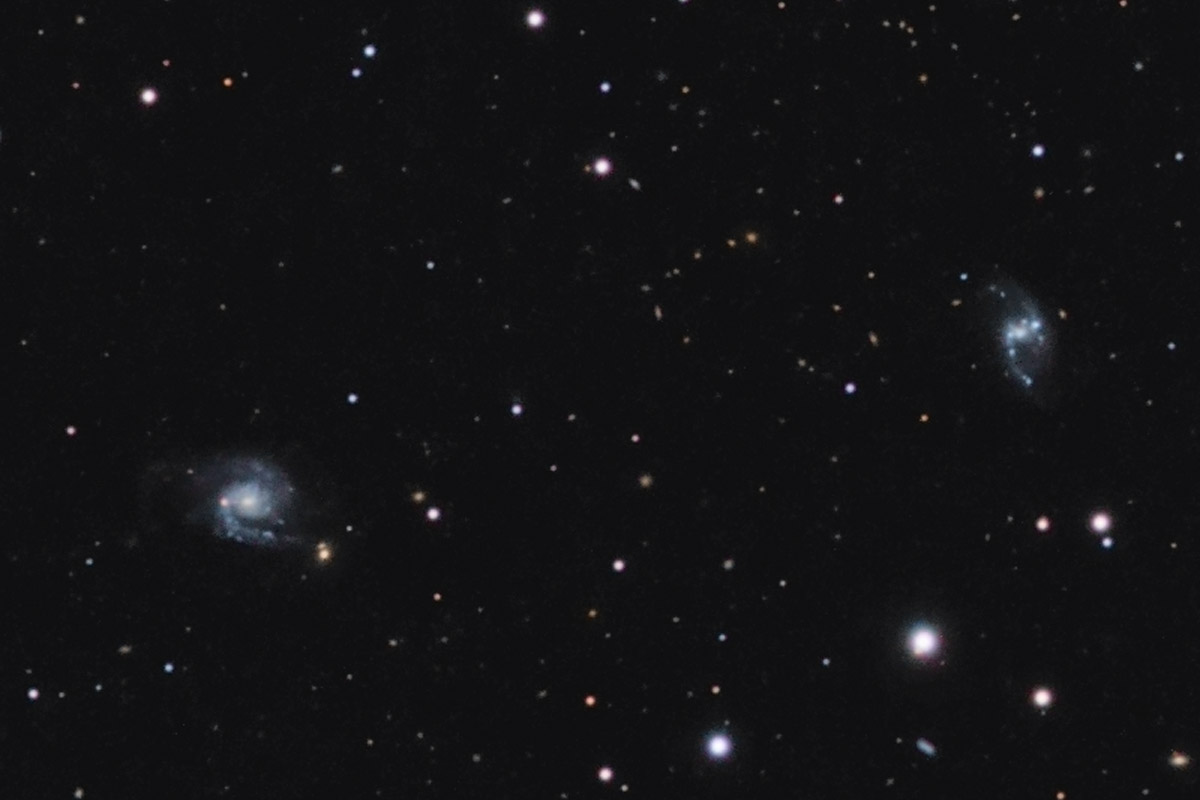 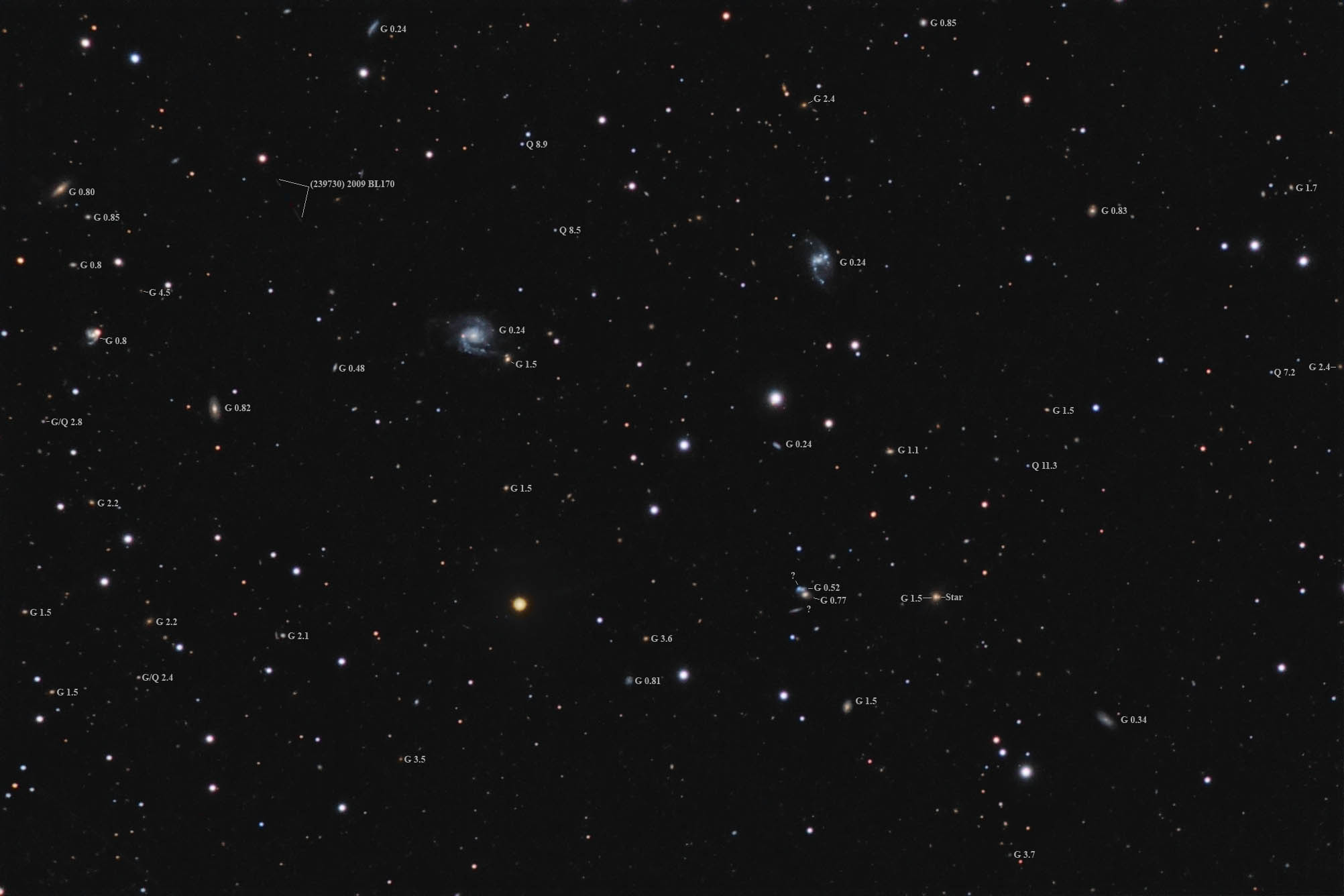 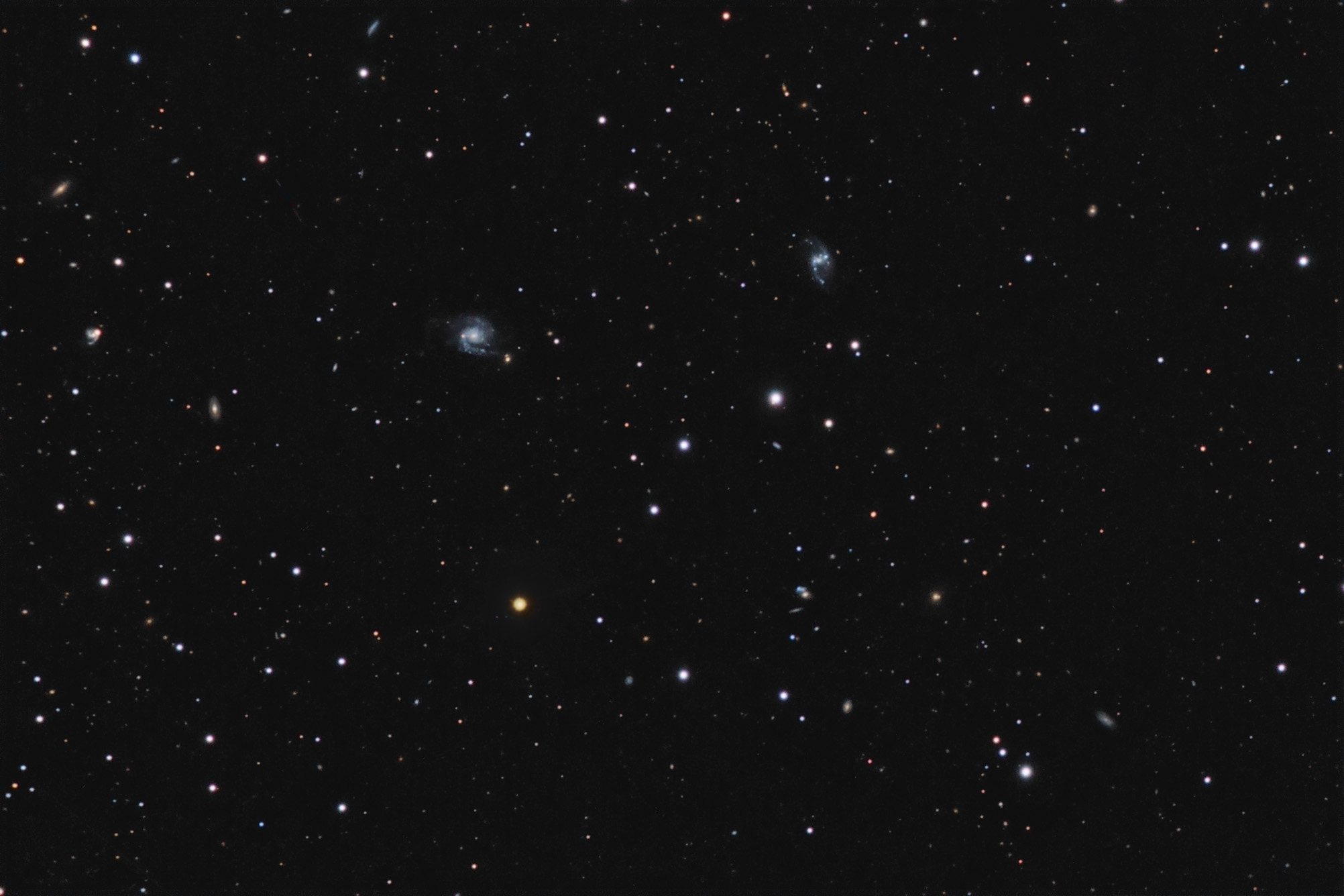