While Arp says it has a low surface brightness companion on its arm I see at least 4 that could fit that description, All outside his image so can\'t be what he is seeing. The two with redshift distances are over a billion light years further away so meaningless to Arp 37\'s evolution.

In any case, this is unimportant. The galaxy is important for a far different reason. It is the archetypal example of a Seyfert galaxy. Quasars far outshine the galaxy they are in. Seyferts seem to have a similarly active core but one that isn\'t anywhere near as bright. They can be divided into two camps. Those with very broad emission lines indicating super high velocities for the gasses emitting this light and those with narrower lines indicating very high velocities, just not as high as the first group. The first is called Seyfert 1 and the second Seyfert 2. M77 is a Seyfert 2. But then things get complicated.

At one time it was thought the difference was age as quasars are seen mostly at distances of over 2 billion light-years with Seyfert 1 seen, on average, somewhat closer and Seyfert 2 galaxies tending to be closer yet. Since distance indicates age we are seeing quasars at a younger age of the universe than Seyfert 1 galaxies tend to reside with Seyfert 2 galaxies tending to be seen only in the more current universe. So is this due to the black hole that powers each having used up its easy fuel so not being as energetic as in the past? That has been the prevailing idea for some time now but studies of Arp 37 (M77) are causing some doubt.

Lately, this idea is falling somewhat out of favor though likely contains some truth. Study of M77 which Hubble and radio telescope arrays can see in fine detail is showing that we tend to see quasars fully face on to the jet emitted by the black hole. They are super bright since we are looking down their gun barrel. This greatly increases its brightness to where it overpowers the galaxy itself. Alignment is critical for this. We see them mostly in the early universe because we see a much higher volume of space and thus by the law of averages see more of them since there are more to see. Seyfert galaxies are just as common as today, just they are too faint to see at that distance because their light is blocked by the inner disk of the galaxy that surrounds the black hole. Only when they are close enough for the galaxy itself to be seen do we recognize their true nature.

I found more articles on this galaxy than any Arp galaxy I\'ve researched. Far too many to even start to read. There must be over 1000 though I didn\'t try to count them. With that many, there must be at least one for every possible theory about this galaxy. So while this is my longest post, I had far more information available I could sort of understand. But I\'m not done yet.

Besides the Seyfert angle, Arp 37 has a very large outer disk of faint stars. These are likely due to an interaction with another galaxy.

More on M77 can be found at http://www.seds.org/messier/m/m077.html which was discovered by Pierre Méchain on October 29, 1780 then verified and recorded by Charles Messier on December 17, 1780.

One aspect of my image bothered me when comparing mine to others. I see a faint blue halo about the main spiral. It is a bit brighter on the western side. I couldn\'t fathom any reason my processing could have done this. Then I came across this article about an ultraviolet halo in the galaxy. Its position seems to match my feature. Since my filters block UV light this makes no sense unless the halo is also seen in blue light. Probably not related but it does make me wonder.
http://apod.nasa.gov/apod/ap960910.html . The orientation of the linked image is the same as mine making the similarity easy to spot.

My image seems to fit the above description of quasar vs Seyfert perfectly as it contains many quasars and some Seyfert galaxies as well as two that seem to have characteristics of both. One more quasar-like (identified as Q/G? on the annotated image) and one more Seyfert like (G/Q?). Quasars range out to over 10 billion light years with a Seyfert 2 galaxy [G(SY2)] at 4.4 billion light years and several clusters over 3 billion light years distant. One cluster I\'ve marked is behind Arp 37\'s outer arms and invisible in my image. I mark its center only because it is almost on top of one of the larger galaxies seen the disk, the only one without redshift value unless it is a member of the cluster. Unlikely, but they vary by only a few seconds of arc so thought it worth pointing out. Another cluster at about the same distance is also positioned behind the disk at the 2:30 position. I didn\'t mark it. All clusters marked are said to be 2 to 3 minutes in diameter. I\'ve drawn a line to their approximate center. NED only gives their approximate position to an accuracy of +/- about 6 pixels.

There are two asteroids in the image, one of which isn\'t in the minor planet database. I\'ve identified it as unknown. Several other similar streaks are seen in the outer disk of the galaxy, all are seen in their entirety in each subframe so aren\'t asteroids. The unknown, however, shows as a very slightly elongated object in each subframe so is a real moving object. Several have asked me why I don\'t take just one 40 minute frame. This is one of several reasons. It allows me to separate real asteroid trails from noise created impostors. 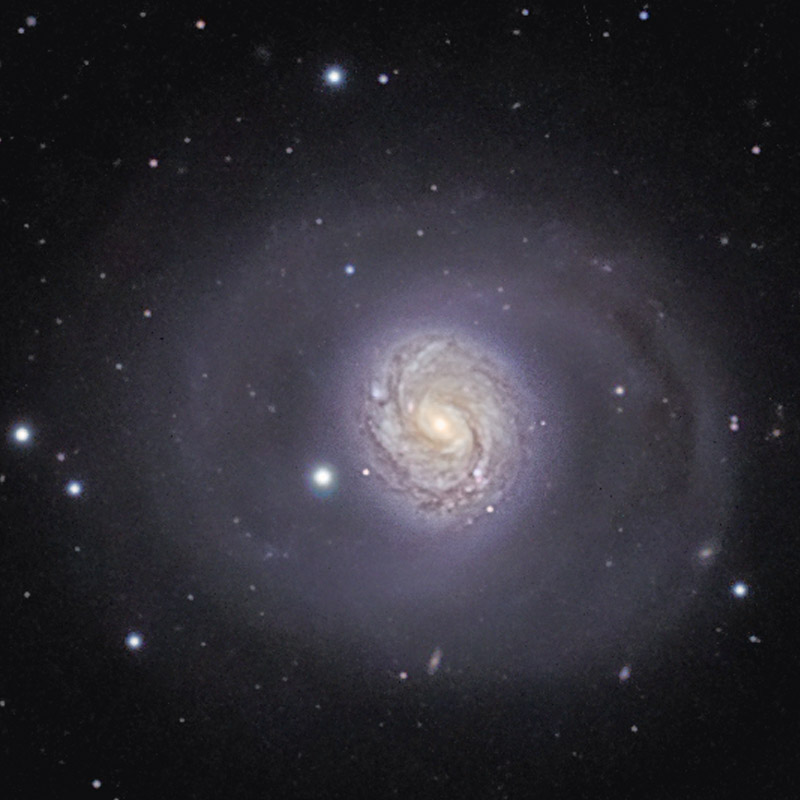 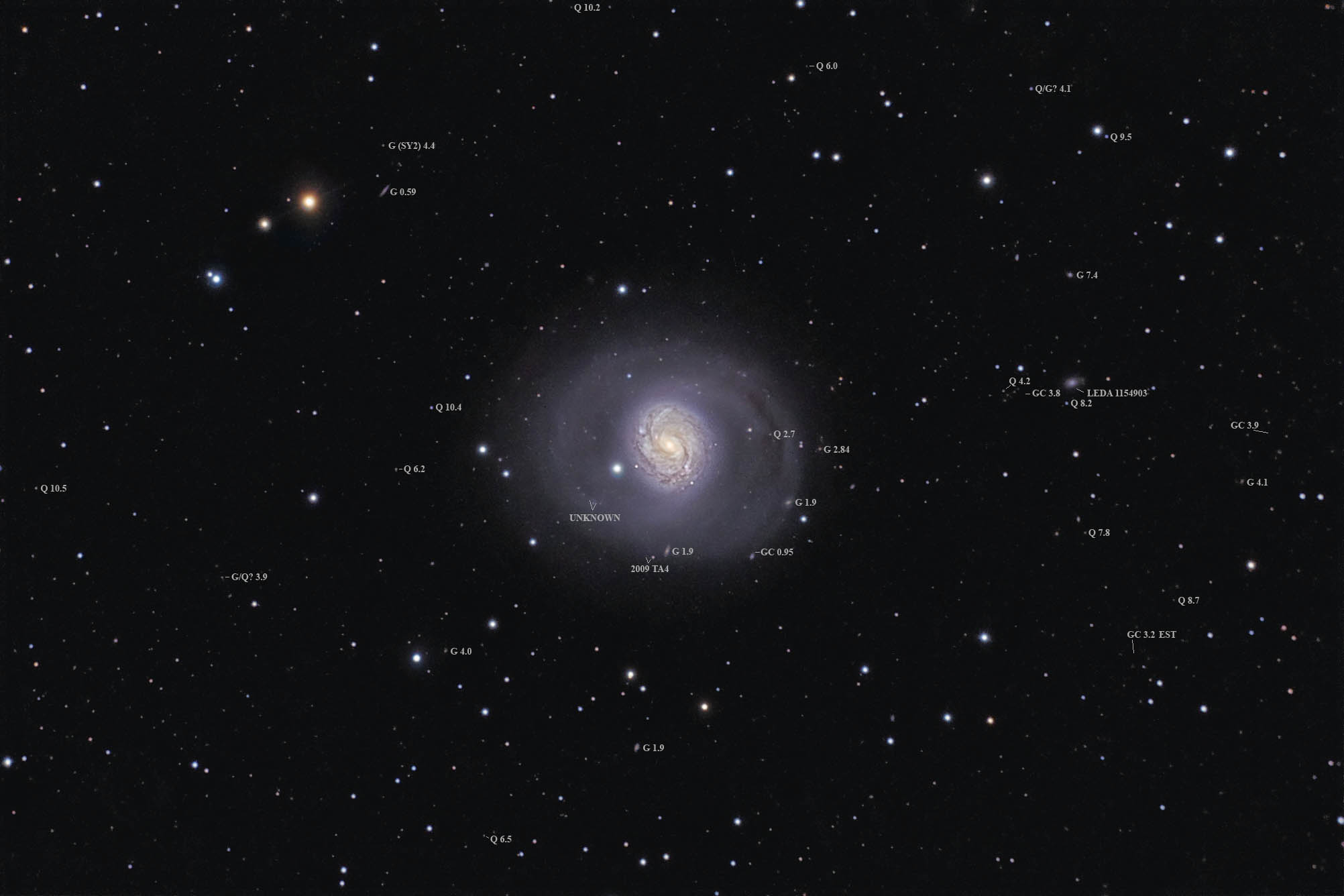 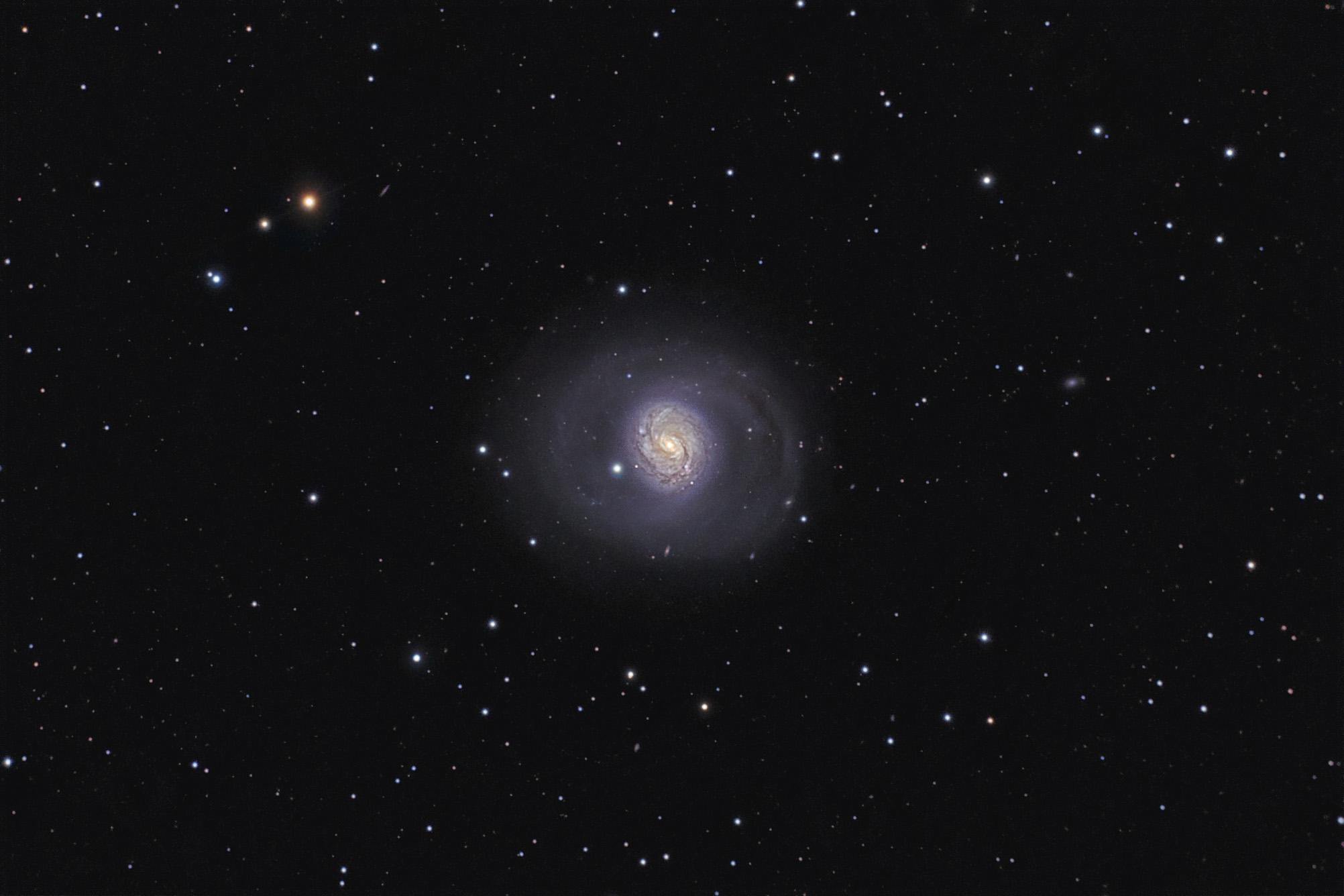