Arp 40/IC 4271 is another from Arp\'s category for spiral galaxies with low surface brightness companions on their arms. It is located in Canes Venatici about 760 to 770 million light-years distant. I suppose the southern member is the \"companion\" but to me, they are of about equal surface brightness, neither being all that faint. I certainly don\'t see either as being on an arm of the other. To me, it appears the southern galaxy is in the foreground. It has a dusty disk larger than the optical disk. It is easily seen against the more distant northern galaxy as a dark band \"separating\" the two galaxies. It is seen in Arp\'s and Sloan images as well.

Are they interacting? Hard to say. Both are Seyfert 2 galaxies. At one time this was thought to be a pretty good sign that interaction was going on. Though now it appears such classification doesn\'t necessarily mean an interaction. Though with both being Seyfert 2 it might in this case. Still, I see no real sign of distortion to either (unless that dust disk qualifies). Other than these two overlapping I really don\'t see what Arp saw in this pair.

Stephane Javelle discovered IC 4271 on July 10, 1896. Did he see both as one, only the larger or both separated? Dreyer said of Javelle\'s discovery; \"faint, small, round, gradually brighter middle, mottled but not resolved.\" The round comment would seem to indicate he saw only the top one but by my measurements, both are about equal in surface brightness so he should have seen both. Most catalogs consider IC 4271 to be both.

Far more interesting to me is a pair I had on my \"Arp-like\" list. I\'ve managed two, and sometimes more Arp galaxies in one image but this is the first (time I also have one from the Arp-like list in the image. It is in the lower left corner and I didn\'t realize it was in the shot at the time. If I had I\'d have framed the shot better. It is SDSS J132957.37+371744.8, a spiral galaxy at a distance of about 750 million light-years. It has a very weird structure. A wide arm that appears to have been drawn out with no corresponding arm on the other side. More interesting though is that from the bottom of the galaxy a faint \"arm\" comes out of nowhere and appears to lead west and a bit north to a faint galaxy, SDSS J132953.47+371750.6. Another galaxy appears connected to it a few seconds of arc to the northwest. That one is not listed in the Sloan survey or in NED. Is this a real connection? I see hints of it in the Sloan image and it appears quite real in my data. Note too how the big spiral seems to have a piece cut right off its north side! Sloan survey lists the western side of the galaxy as a separate entry, SDSS J132956.73+371747.9 with no distance noted. Could it really be a separate galaxy? The odd arm seems to come from its position, wind around and behind the main galaxy then come out the other side as the wide arm, almost as if it were a huge plume of a disintegrating galaxy. This could explain the cut off appearance. Or is my mind wandering afield at 2 a.m.? The main galaxy is also in the 2MASS IR catalog as 2MASX J13295738+3717447. So is the galaxy directly east, 2MASX J13300048+3717277 with a redshift distance of 760 million light-years. Could all three of these plus the 2 Arp 40 galaxies all be part of the same group? Probably. Just above the top of my image just a hair left of center is the center of the Abell 1749 galaxy cluster with a diameter of 40\' of arc containing some 51 galaxies. Its distance is listed as 770 million light-years.

These galaxies may be too far away to be photogenic but they sure are interesting, just the same. My enlarged, cropped image includes both galaxy systems at 0.67\" per pixel. 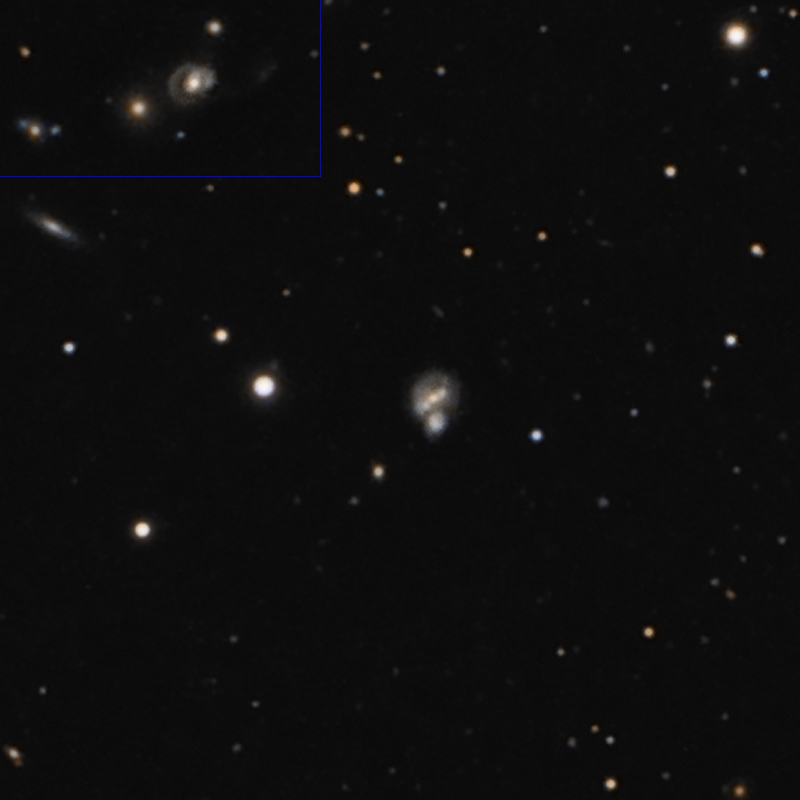 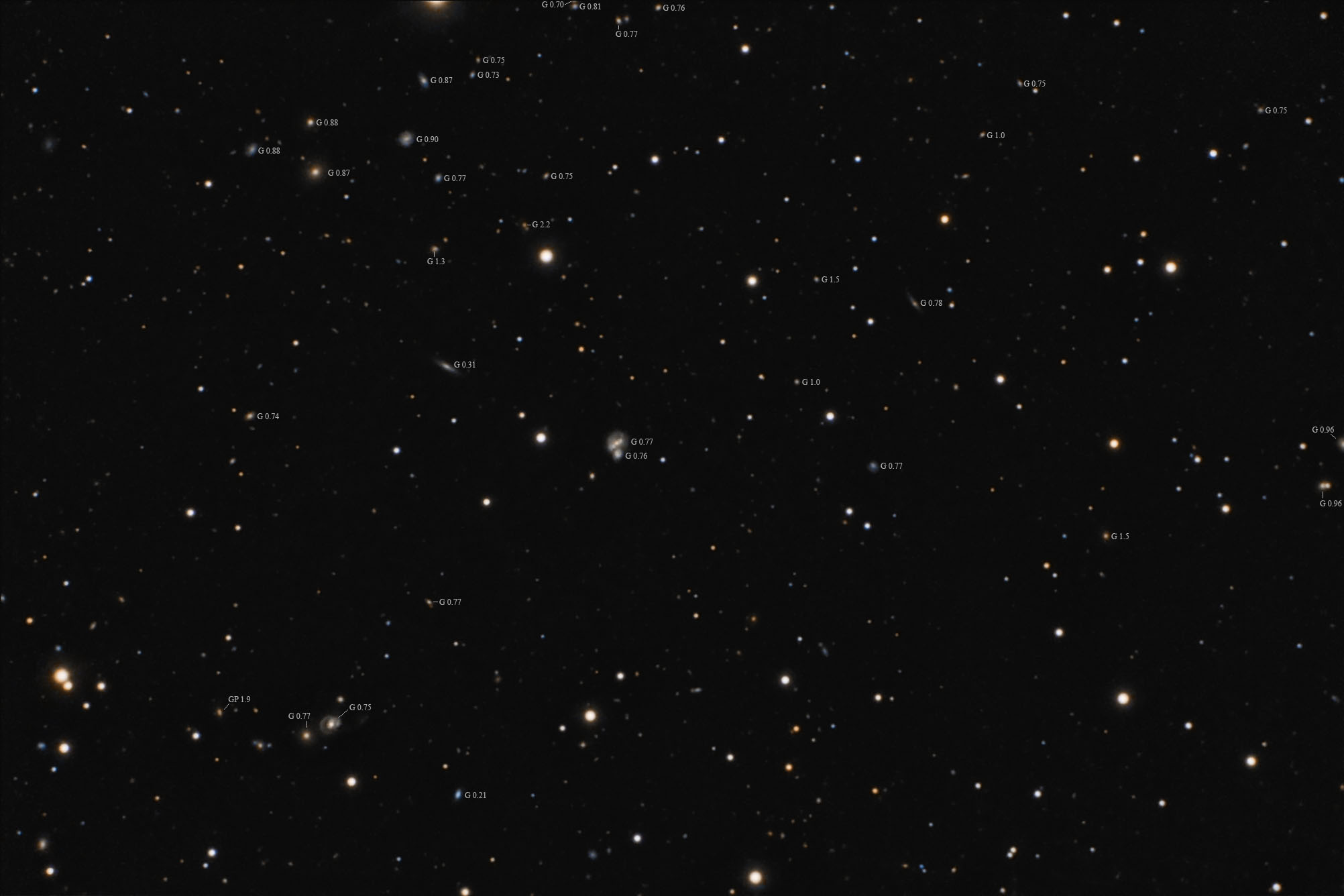 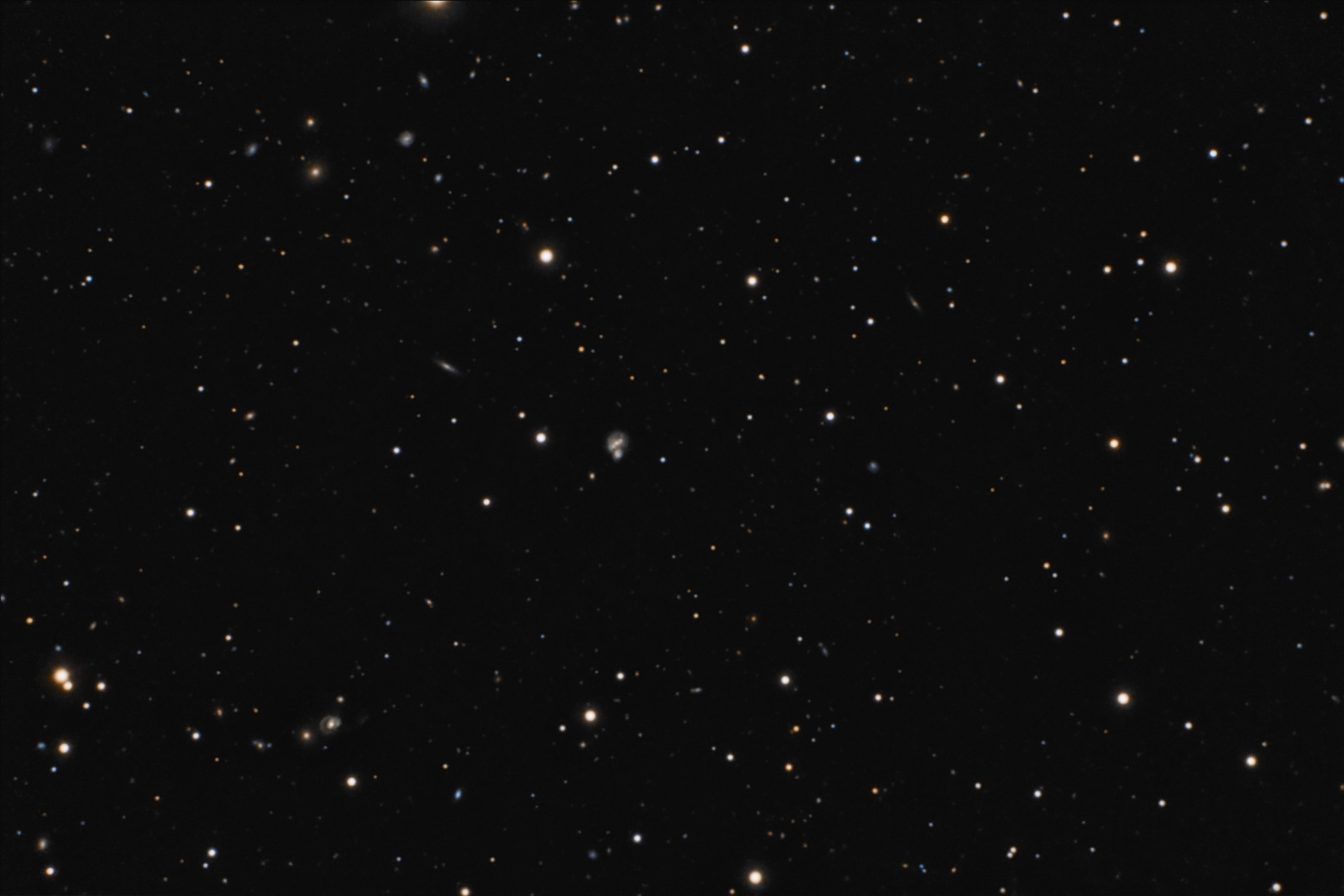