Arp 50/NGC 1520 is located in eastern Cetus just across the border with Aquarius and is just under 400 million light-years away. It is a rather questionable object in many ways. First, many catalogs, including the database in The Sky 6 that I use to point my scope say Arp 50 is NGC 5625 pointing me to the opposite side of the sky. Thus, when I set up the script file for it then went to bed I got up to find blank images and an error message telling me the object was beyond my scope\'s horizon limits. By default, the scope parked itself and shut down. So the camera took way out of focus images of the observatory wall two feet away from the front of the scope!

Arp 50 is really IC 1520 so when I entered that I got a good image. Not easy as it is about at my -15 degree declination limit.

Another reason this is a questionable object is Arp\'s classification of it under spiral galaxies with small high surface brightness companions on the arms. To what is he referring? He doesn\'t say. The galaxy has several bright knots and arcs in the arms as well as a faint diffuse blob on the end of the southern arm. This NED classifies as a second galaxy. It certainly doesn\'t have a high surface brightness, however, being nearly indistinguishable from the arm in Arp\'s image. There\'s a nice bright knot in the other arm above a short bright arc. Is this knot what Arp refers to, it does have a rather high surface brightness. Some articles I found say there is no nearby galaxy at all. Others call it a M51 type system. I can\'t find any high resolution images of it on the net. In my image, a few seconds of arc above the \"second galaxy\" according to NED and left is a near starlike object. The PSF though is not right for a star. This could be due to it being in the fuzz of the arm or because it is a distant galaxy. Flip a coin. I need far more resolution to settle this.

I\'m not the only one puzzled by this one. Science writer Courtney Seligman is too. http://cseligman.com/text/atlas/ic15.htm#ic1520 Unfortunately, his image isn\'t any better than Arp\'s. Arp\'s image was taken under what he calls a seeing class of 1. He defines 3 as being 1\" to 1.5\" with each class about twice as good (5 maximum) or bad (1 minimum). So Arp\'s image would be taken under 4\" or so seeing. And I thought my seeing was bad! The POSS survey plate images are better than his of this entry. The galaxy was discovered by Stephane Javelle on November 4, 1891.

If that low surface brightness blob is a separate galaxy is it nearby and could it have the mass to pull out that arm? There\'s nothing on it that I find to help answer this. To me, this is a coin flip as to the existence of a second galaxy. If none why is the arm distorted? It is a rather lonely galaxy it would appear. NED has no distance data on any other galaxy in the entire frame. One out of frame to the north is listed at 1.5 billion light-years so not involved. 2MASX J23581154-1400522, to the northeast, is the only likely candidate I find but without any distance data, there\'s no way to know if this is a reasonable one. Most galaxies in the field are cataloged only by the APMUKS, an automatic plate measurement survey using the UK\'s Schmidt telescope. This can\'t provide distance data. I marked one of these and could have marked a hundred or so. As with many modern catalogs, the name gives its position, J2000 coordinates in this case.

My image did pick up 5 asteroids but again, another problem. One is unknown to the Minor Planet Center and is apparently one they haven\'t included as yet. It might even be undiscovered. If so it will remain that way as this image was taken 2010 September 5.28UT so a bit late for follow-up. (Edit: It is still not in the Minor Planet Center\'s database 6 years later.) 4 others were in their database and are marked on the annotated image. The unknown is marked with a question mark, the others with their name and the planet center\'s magnitude estimate. One is buried in the glow of a \"bright\" (7th magnitude so too faint to see naked eye) F2V type star. 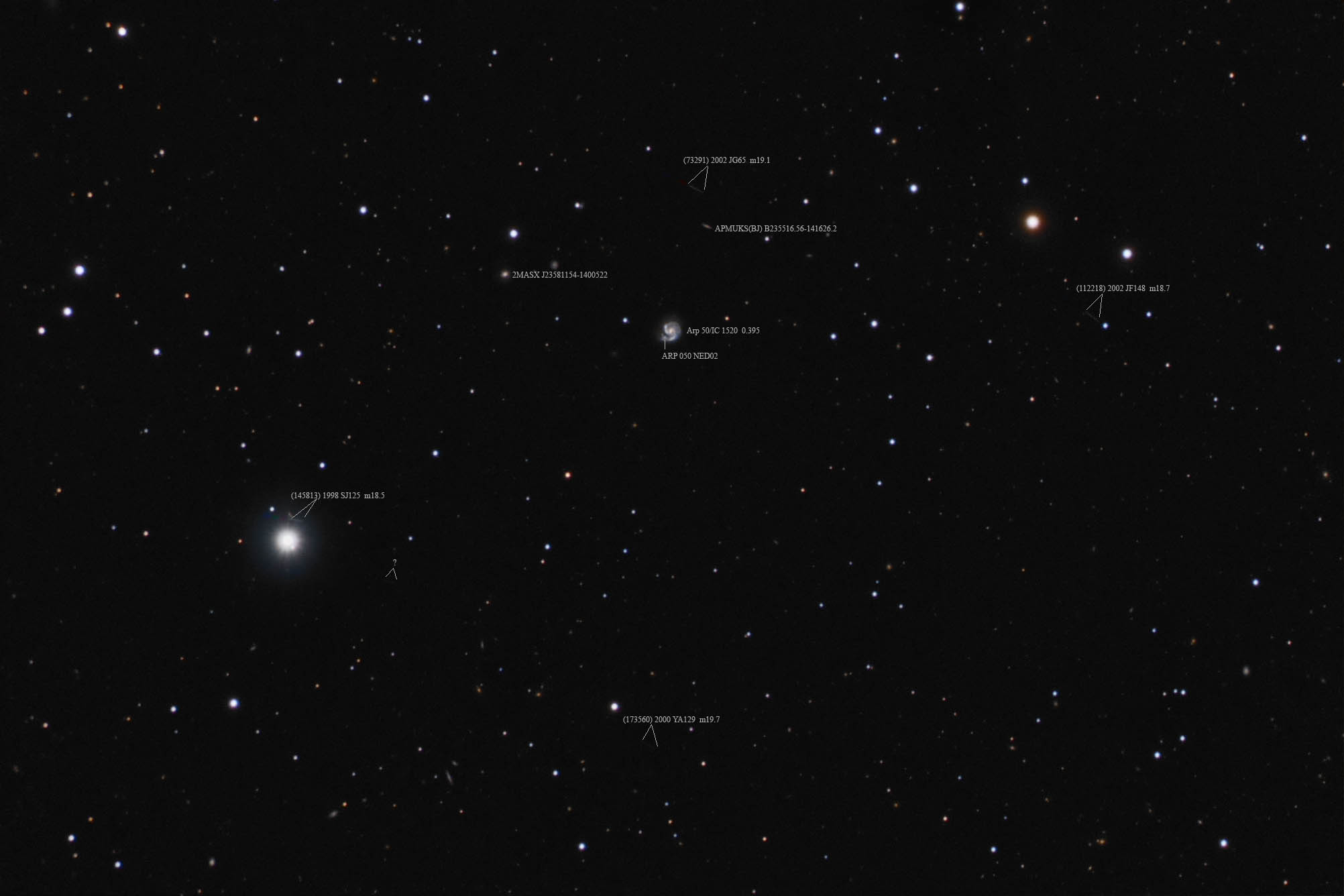 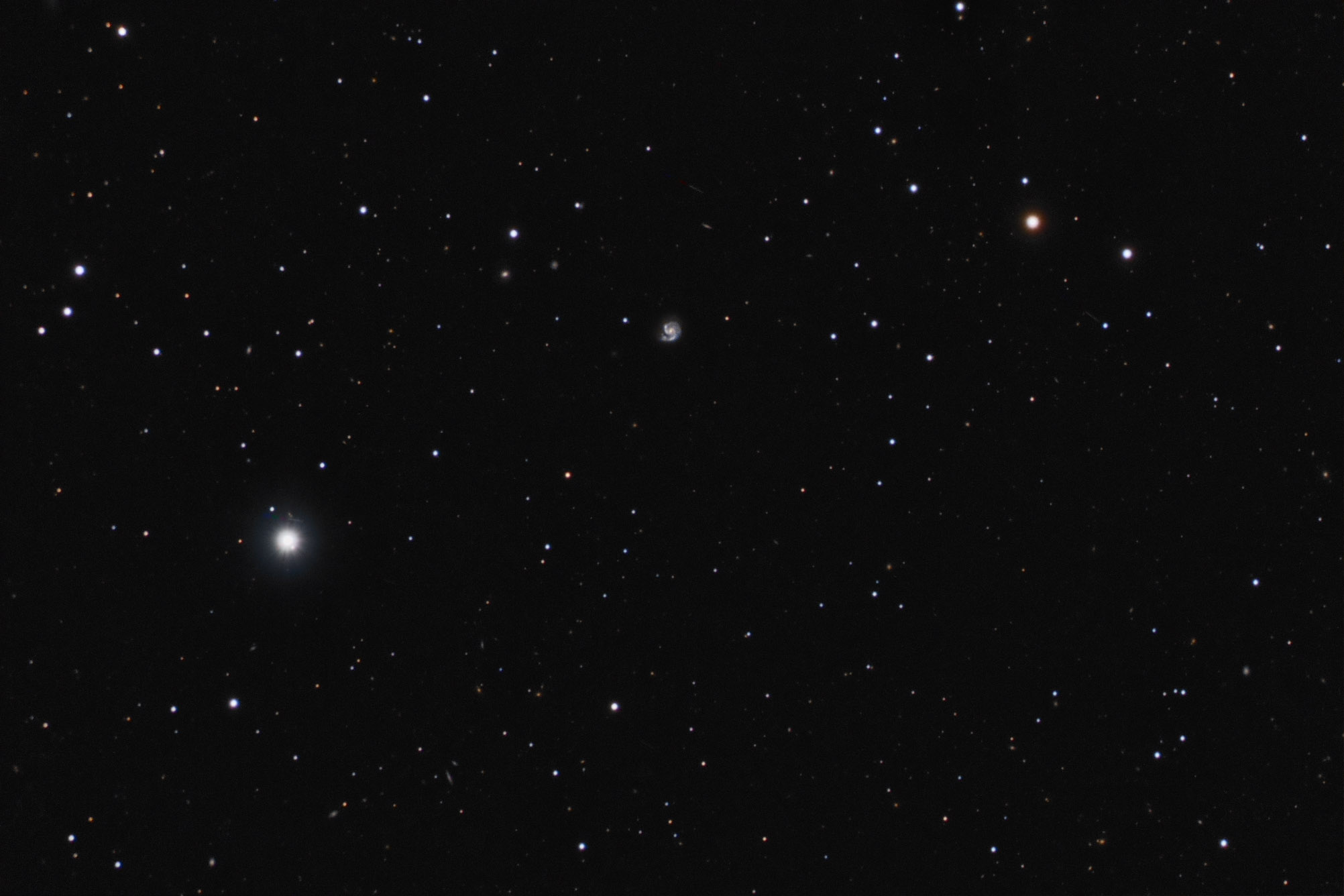 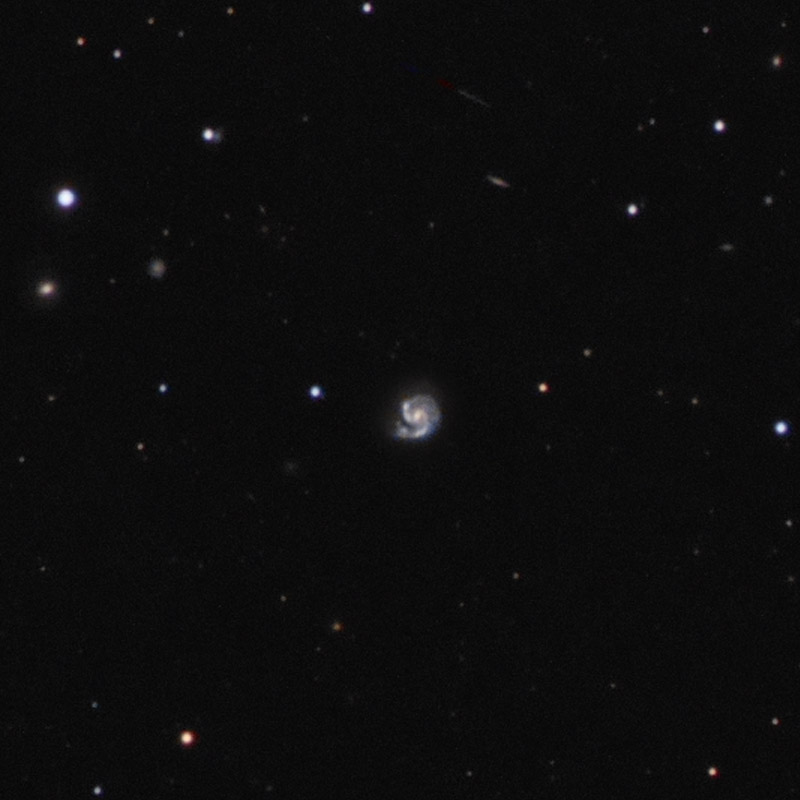