Arp 59 falls under Arp\'s classification: Spiral Galaxies with Companions on Arms: Small high surface brightness companions. It is located just under 200 million light years away and is found in the constellation of Cetus. This appears to be a system similar to M51 but with more confused spiral arms. Arp had no comment about this pair. NED has no redshift for the companion to tell if it is a true companion.

The main galaxy is NGC 341, the companion MCG -02-03-064. The little galaxy at the 5 O\'clock position is SDSS J010044.49-091151.8. I doubt it is related. I can\'t tell which arm, north or south, the companion is on. In Arp\'s photo (south up) the south arm seems to lead to the companion while the north one seems to end at a star to the lower left. In my image, things look just the reverse. The southern arm seems to just suddenly end at the north end of the galaxy or maybe continue and be the blue spike sticking out at the NE While the north arm makes more than a 360 to end in at the companion. Usually, Arp\'s and my images look much alike but not in this case. It appears it was a night of very poor seeing atop Palomar mountain when Arp took his image. That may explain the differences. The Sloan image doesn\'t help much that I see. Obviously, the encounter has messed up the arms of NGC 341. NED classes it as SAB(r)bc. It was discovered by Édouard Stephan on October 21, 1881.

As in my image of Arp 19, there appears to be a galaxy cluster just to the east of the galaxy. Though none is shown in NED at that location or any other location within this image. See the enlarged cropped image to see the really faint galaxies in this grouping. I see a few smaller groupings of faint galaxies throughout the image. While the SDSS has apparently cataloged them (I didn\'t begin to check them all) no redshift distances are provided.

As I\'ve come to expect the SDSS omits blue, low surface brightness galaxies. Is there something about their recognition algorithm that misses them? Or is it a NED selection effect? Maybe it\'s something else. In any case, the very blue smudge NW of Arp 59 isn\'t in the over 2000 SDSS galaxies in this image. But it did get picked up by the UK Automated Plate Survey as APMUKS(BJ) B005807.36-092427.4. Is it involved with Arp 59? Its blue color would indicate lots of newly formed massive stars often caused by such interaction. Yet no one seems to have paid it any attention.

This isn\'t the only somewhat blue galaxy missed by the SDSS and or NED. There\'s APMUKS(BJ) B005908.94-092242.1 near the left edge above center. It is just below a larger galaxy on the annotated image at 0.71 billion light years. There may be more, I didn\'t search very hard to find these two. NED picks up 24th magnitude galaxies from the SDSS and misses these 18th magnitude ones.

On the other hand, the very blue sliver of a galaxy in the southeast corner of my image is SDSS J010143.56-091900.7 with a redshift almost identical to that of Arp 59. Could it have tangled with Arp 59 in the past thus causing its new massive stars? 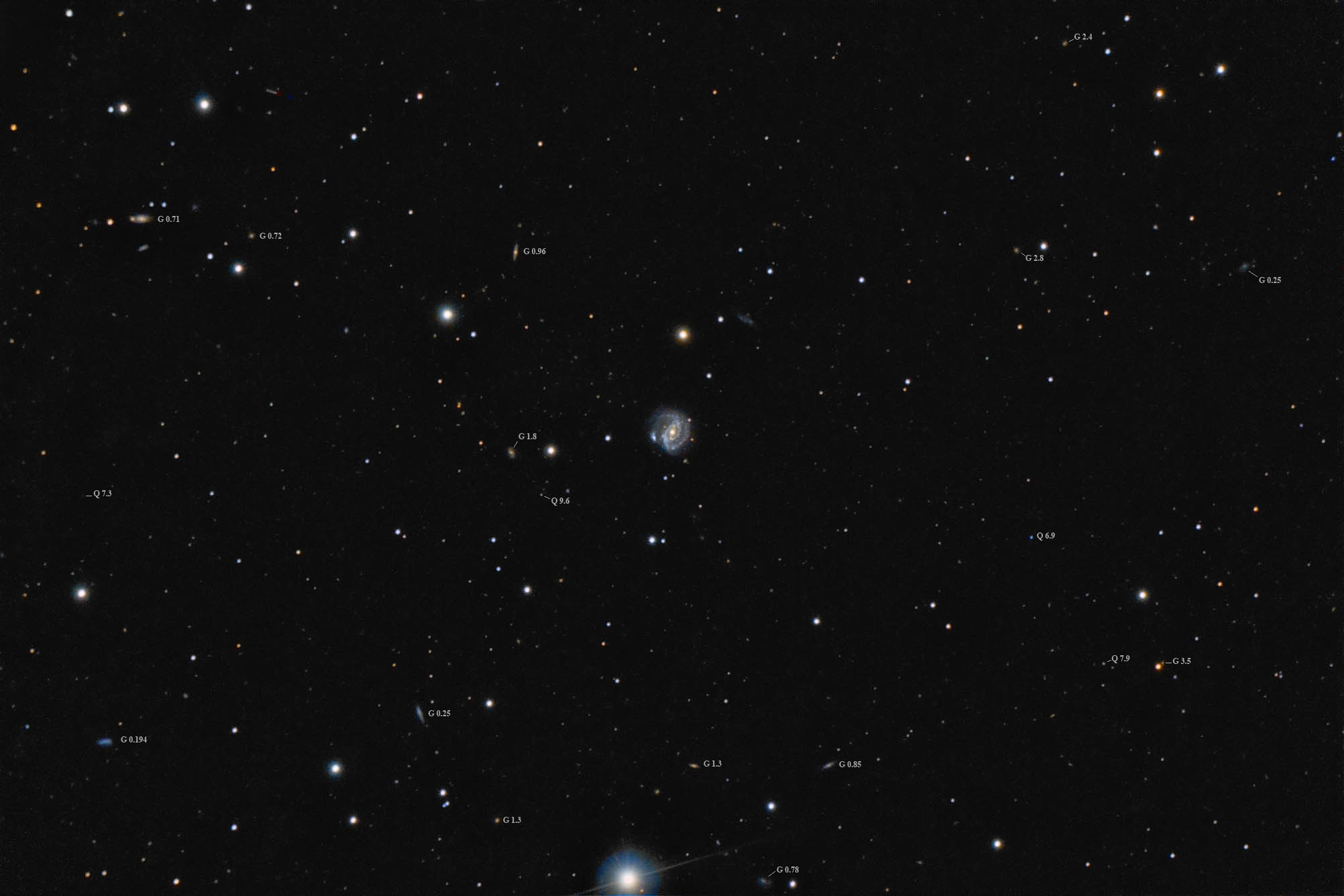 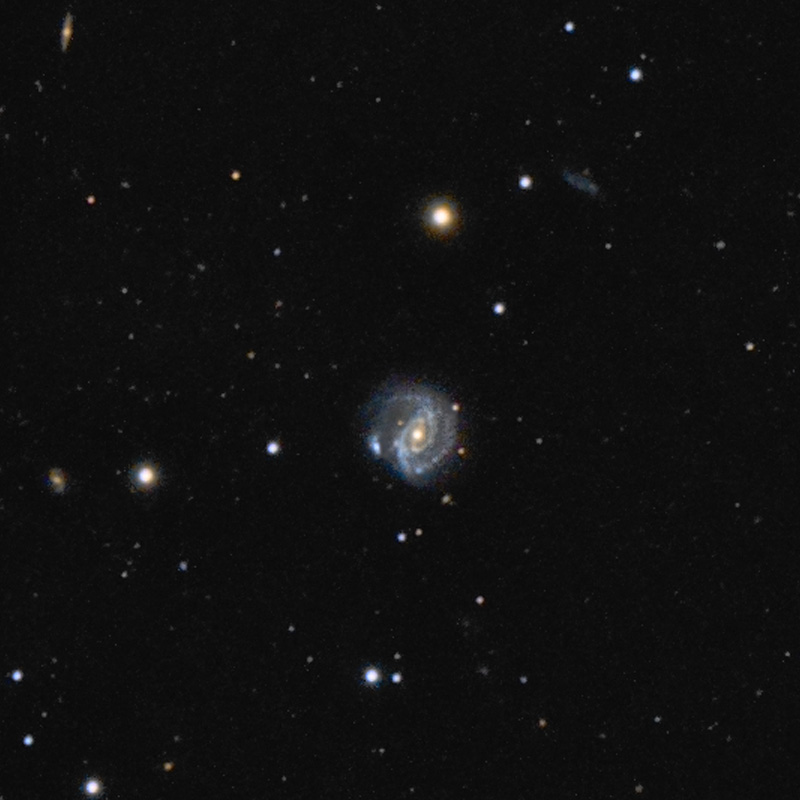 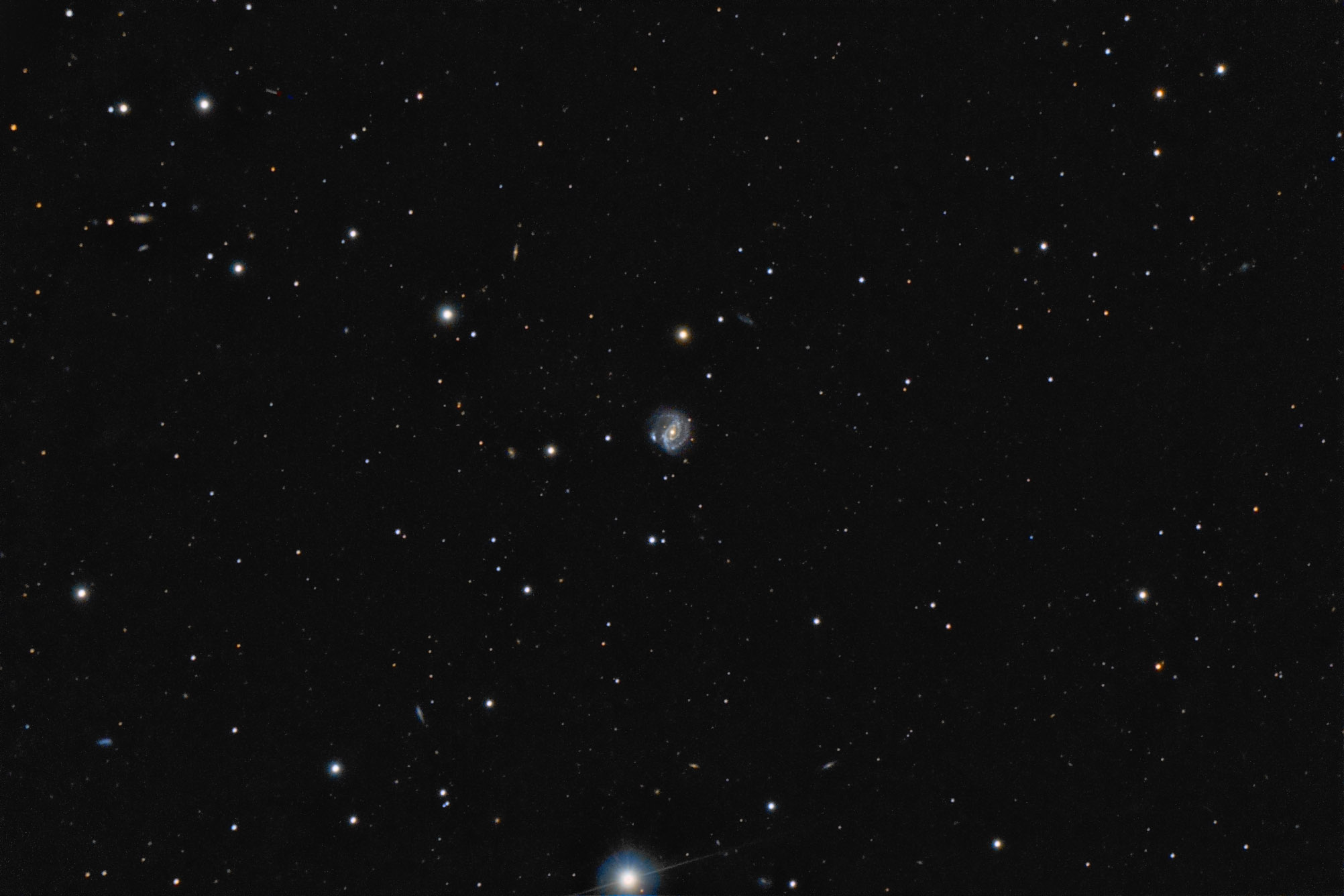