Arp 62 was classed by Arp under Galaxies with small high surface brightness companions on arms. It is located in Ursa Major about 280 million light-years from us. The CGCG catalog says of the pair: \"Pair of neutral post-eruptive SB and elliptical compact, separation 40\" northeast to southwest.\" In most catalogs, it is listed under one number. UGC 6865a and b, CGCG 214-035a and b, etc. A is usually the little companion as it is the westernmost of the two. But the western one is VV 286b with the main one being VV 286a just to make life more confusing.

NED classifies the main galaxy as SB, simply a barred spiral with no attempt to describe the arms. The companion is listed as E(c). I believe the c is for condensed or possibly compact. At least it sure is. Could be its outer stars have been stripped from it by the encounter leaving only a core or it really was this way from the start. I found no papers on this subject. Shouldn\'t be hard to tell if the spray of stars contains a lot of stars similar to those in the small companion. Another case of too many galaxies and too few telescopes and grad students (translate that into too little money as well).

In the annotated image there is a lot of galaxies at a distance of about 890 million light-years. Though I found no cluster listed for that distance. In the upper left corner, I\'ve marked a red galaxy as G/GC as it is the cD galaxy that anchors a galaxy cluster with a given distance of about 1.6 billion light-years though the galaxy itself has a redshift of a bit under 1.5 billion light-years. Since it is the anchor I\'d think it\'s distance should rule but in most of these cases that doesn\'t seem to be the case, I don\'t know why. The cluster is known as MaxBCG J178.72386+43.60782 and the galaxy as SDSS J115453.73+433628.2. It is in the 2MASX list as an IR source as well. MaxBCG = Maximum likelihood redshift Brightest Cluster Galaxy and can identify both the cluster and the main galaxy in the cluster as it does in this case. Both the cluster and galaxy carry the same number in this catalog, that is just its J2000 coordinates. The cluster is listed in NED as having 16 members. The only other cluster member with a given redshift has one that agrees to the redshift of the anchoring galaxy, not that given for the cluster. There\'s nothing on the rest in the area.

Another galaxy cluster is in the lower right corner. NSCS J115213+431915 is listed at 5 billion light-years with some 37 members. No diameter is listed. The label is located at the center of the cluster as defined at NED. 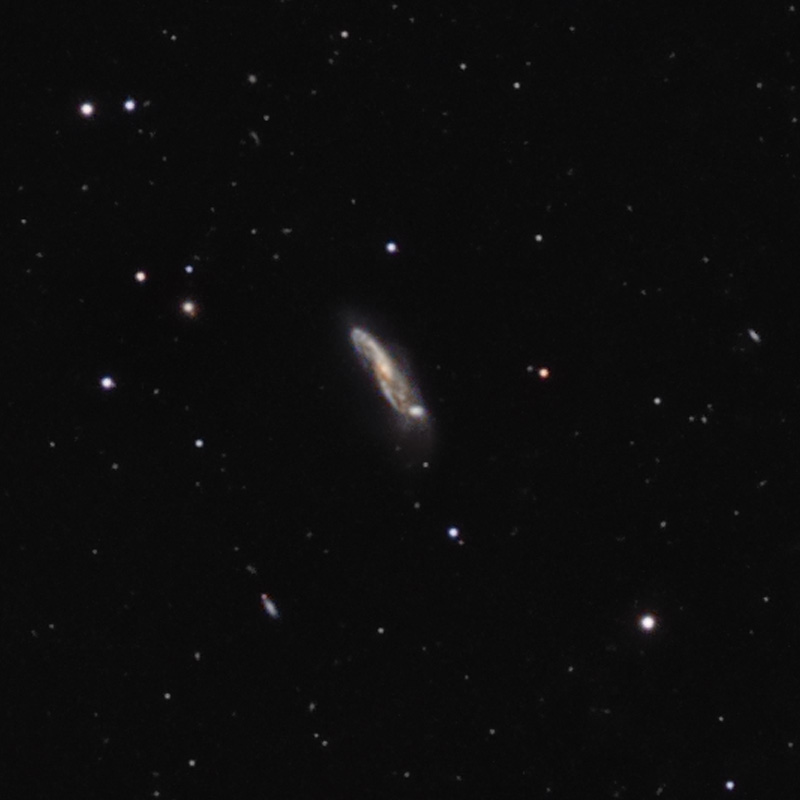 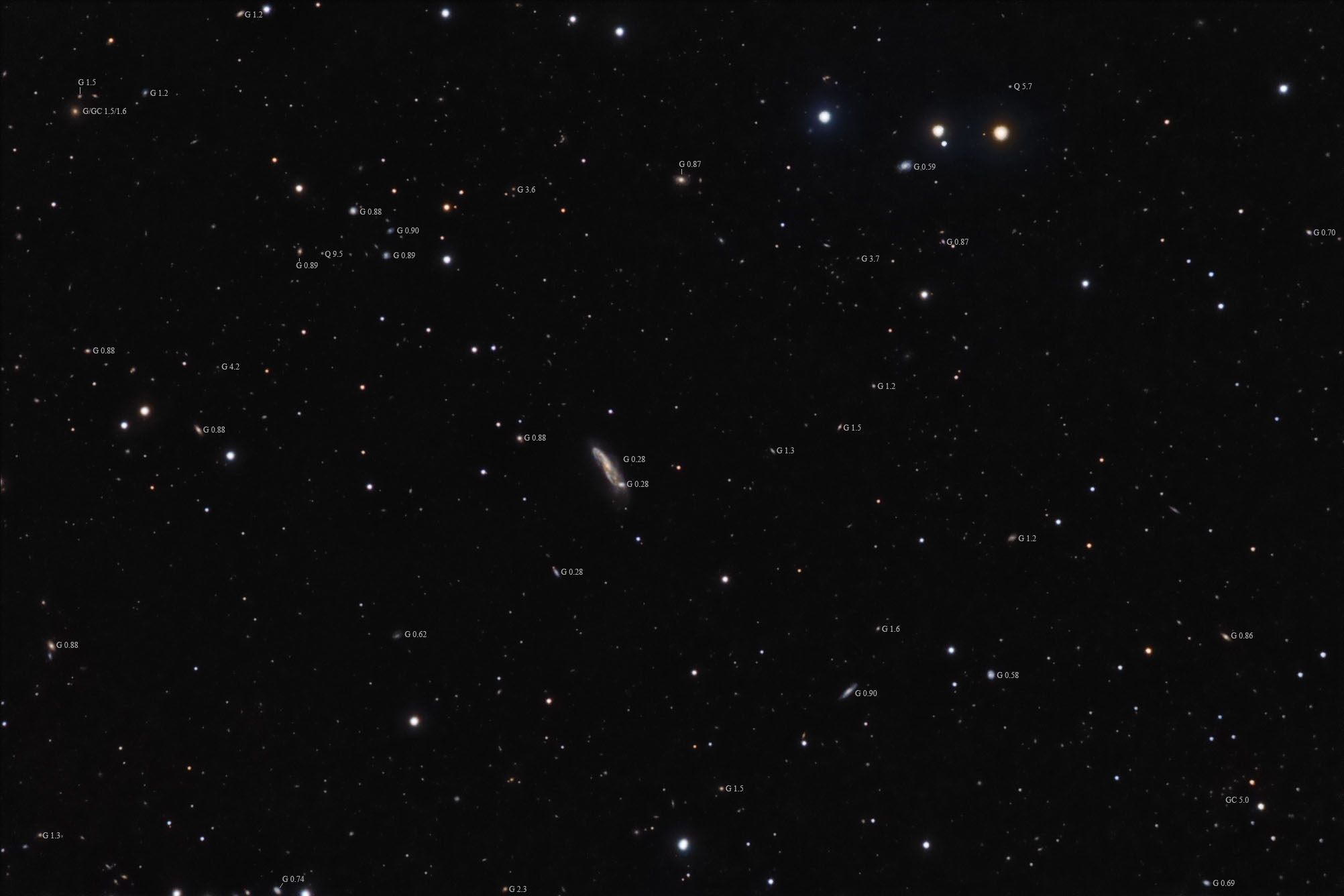 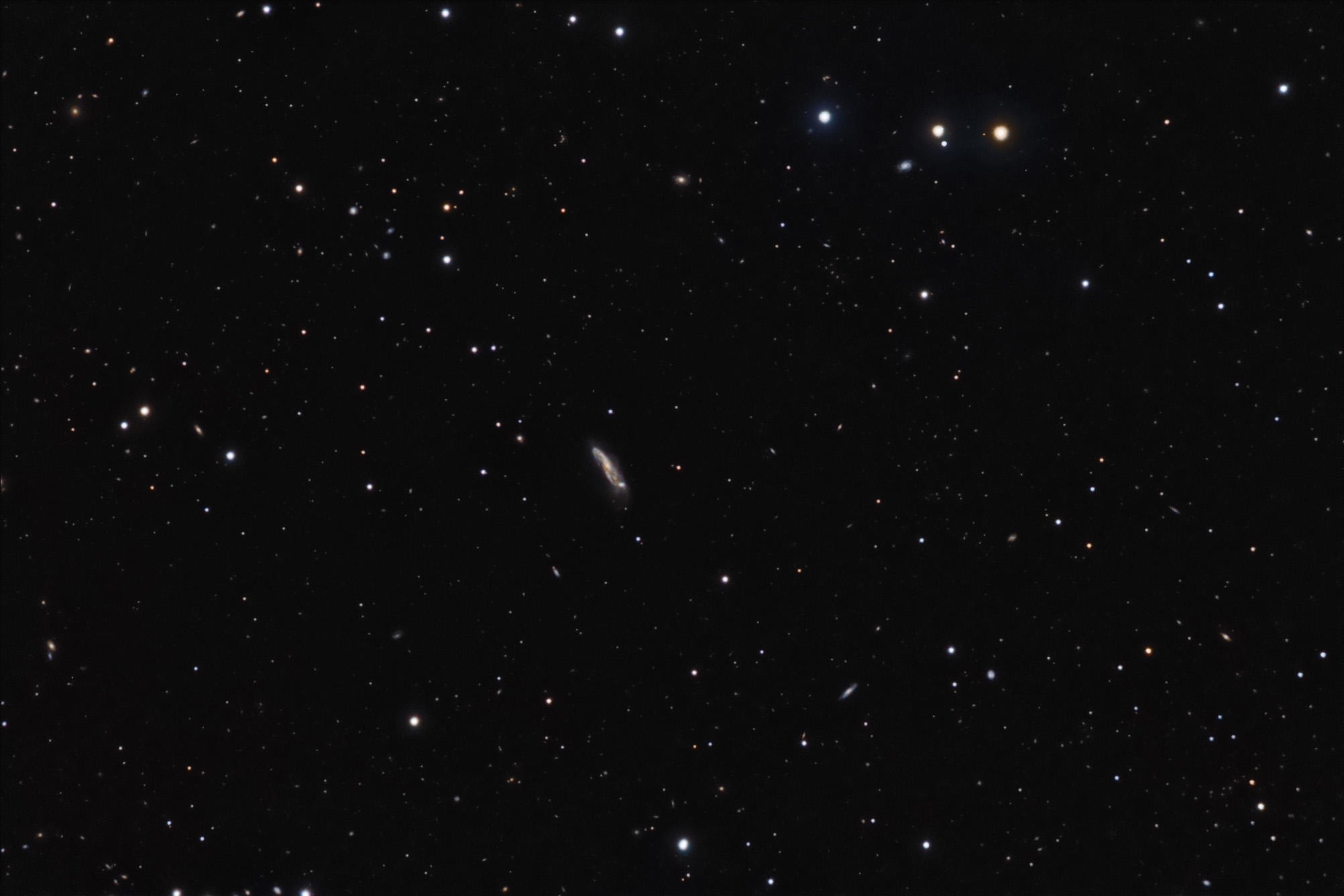