Arp 68/NGC 7757 is a Sc spiral galaxy in Pisces at about 120 million light-years. Arp included it in his category Spiral Galaxies with small high surface brightness companions on arms. I\'d have put it in his heavy arm category as the \"companion\" appears to be in the distant background. Arp said the companion was NGC 7756. Lord Rosse who discovered NGC 7756 said this about NGC 7756 \"Another neb about 5\' sp (NGC 7757).\" By \"sp\" he means south preceding which is south-west. The only object 5\' south-west of NGC 7757 is a 12.8 magnitude rather white star. His description is a match for NGC 7757. No one doubts this is a double sighting of NGC 7757. The problem is some sources, like Arp, claim the companion is NGC 7756. This obviously isn\'t the case. The Kanipe-Webb book gets it right as does NED and the NGC Project. But what is the designation of the companion? It doesn\'t seem to have one, at least in NED! NED does list an HII region within a couple seconds of arc of its position, however. I can\'t see it against the distant galaxy. In fact, most of the fuzzy objects in my image don\'t have any catalog entry that NED shows. Within 15\' radius of Arp 68, NED lists only 6 other galaxies, only one of which has a redshift listed. You\'ll find this galaxy due east (left) of Arp 68 just above a rather bright star. It is the X-ray galaxy GALEX 2690243303817875752 also at 120 million light-years. The very blue galaxy just below Arp 68 and a tad to the east of its center is [HDL96] 407-017. I have nothing much on it.

Most sources consider the companion just a coincidence of line of sight that isn\'t related to Arp 68 in any way. It shows no sign of interaction though NGC 7757 does seem somewhat disturbed. Arp noted the arm saying \"Many star-like knots lined up along straight arm.\" If it has interacted with anything recently the only candidate appears to be the other one at 120 million light years. Being an X-ray galaxy it has apparently been fired up. But there\'s no real evidence the two ever interacted. A better candidate might be be NGC 7750 about 39 minutes southwest of Arp 68 so well out of my image. It also is about 120 million light years distant and is classed as (R\')SB(rs)c pec:. They are too far apart for one frame but I wish I\'d realized it was there last fall. I\'ll try for it this fall weather willing.

The image has quite a few asteroids in it. What\'s really annoying to me is that THREE (now two) of them are unknown to the Minor Planet Center. Unfortunately, I took this back last September and just recently found the asteroids so there\'s no way to follow up. They are still lost awaiting discovery it seems. I\'ve \"found\" about 8 now that I\'ve seen months too late to follow up on. This is getting to be routine with me it seems. I\'ve included an annotated image that shows that identifies the asteroids.

This field is out of the Sloan survey area so there\'s very little data available and no professional images, other than Arp\'s, that I could find on the net.

Arp\'s image
http://ned.ipac.caltech.edu/level5/Arp/Figures/big_arp68.jpeg
His image appears to have a plate defect at the southwest end of the companion (right in his photo). It appears to be a round stain of some sort. 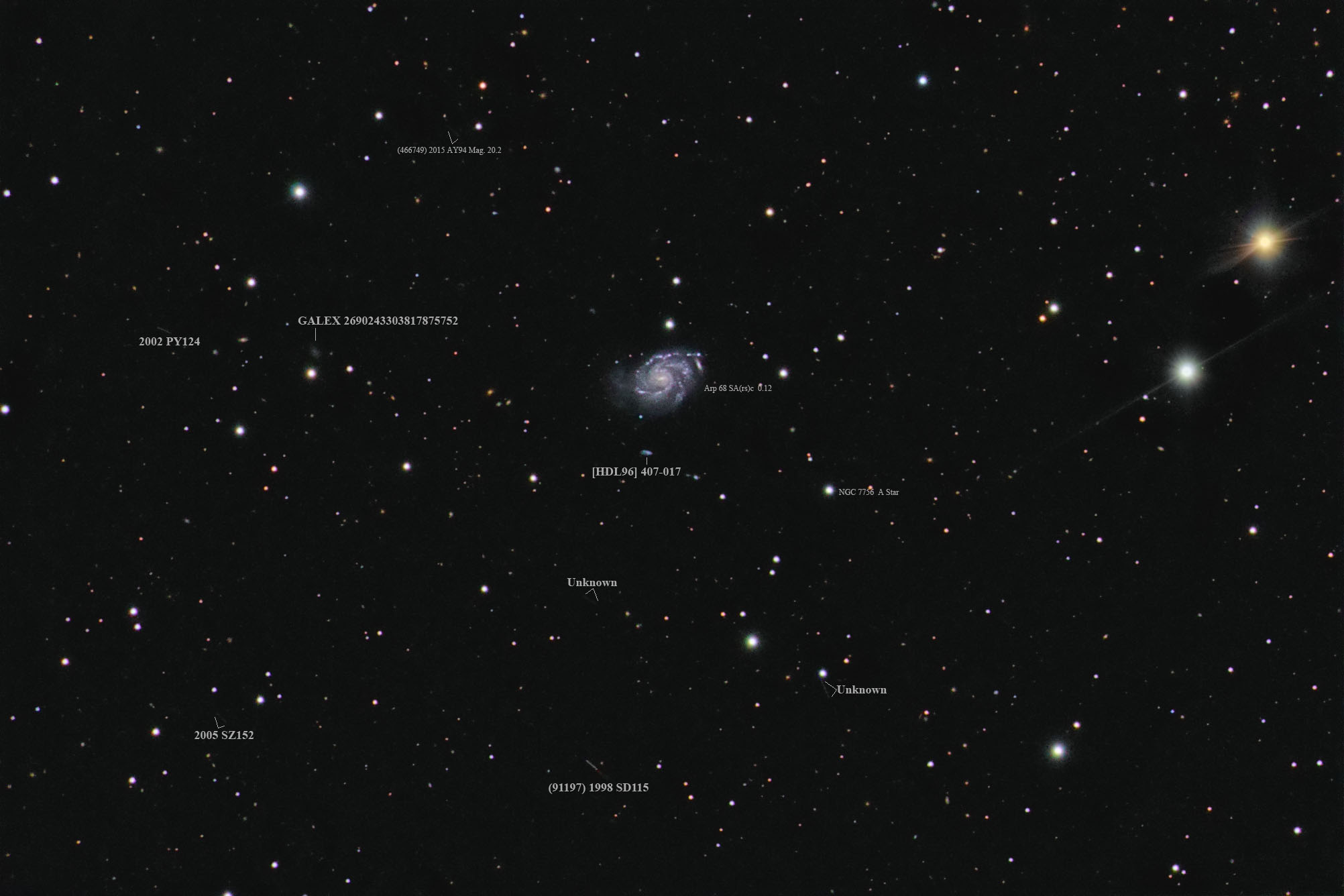 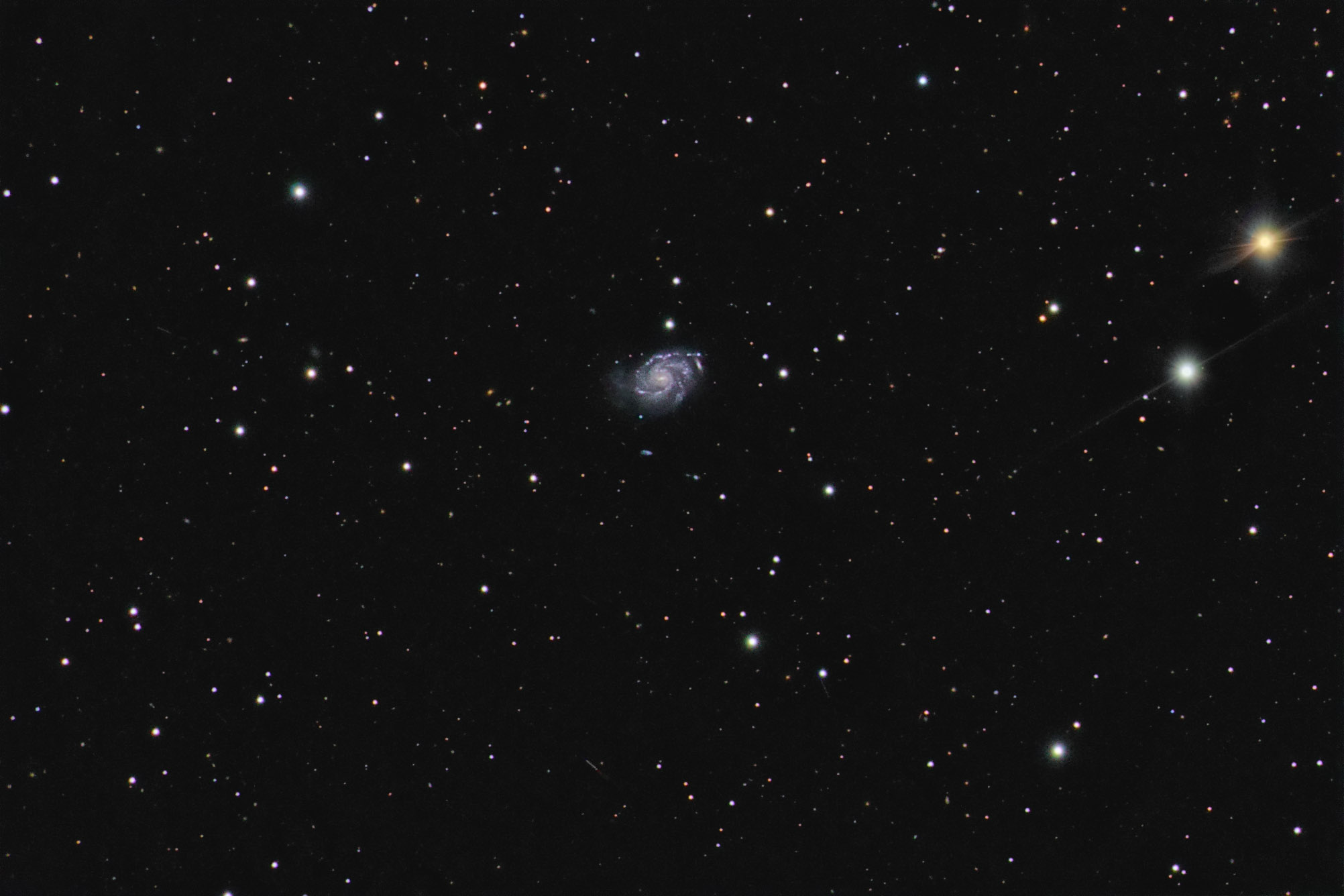 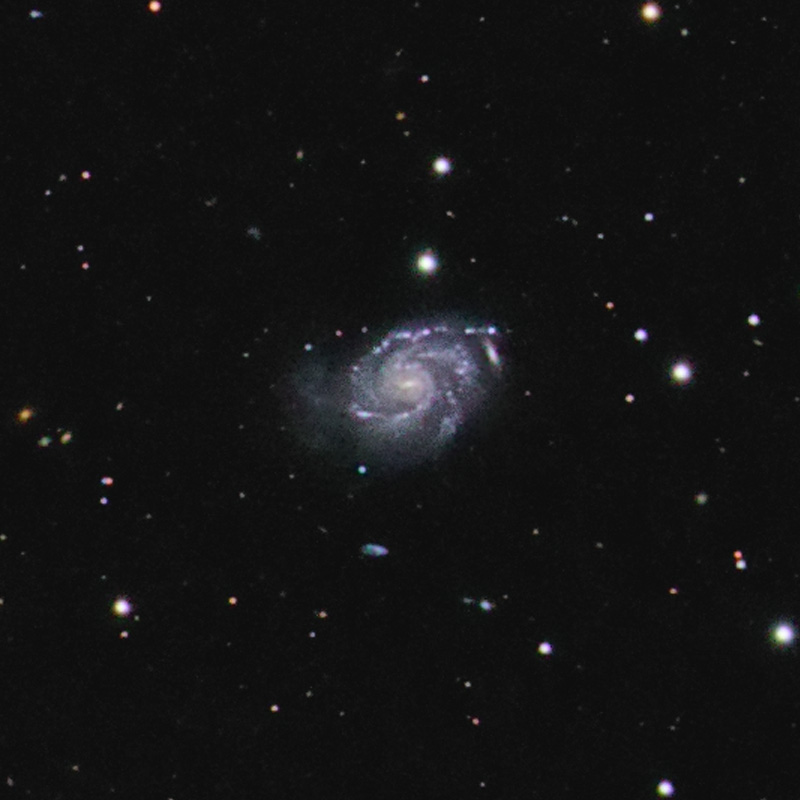