Arp 69/NGC 5579 is located in Bootes. By redshift, it is about 173 million light-years distant. By Tully-Fisher it is only 130 million light-years away. Flip a coin? Arp put it in his category of spirals with small high surface brightness companions on an arm. There is a companion but it isn\'t exactly on an arm. It is LEDA 214249 and has a redshift distance of 170 million light years so shares about the same redshift as Arp 69 thus likely is a true companion. Arp has another category this could go in, 3 armed spirals. It might also fit his one heavy arm category for the long south going arm that is rather J shaped. NED and Seligman classes it as SABcd. NGC project Sc. I prefer NED\'s classification.

Did the companion have anything to do with the distortion of Arp 69? On one hand, it is very low mass and doesn\'t look disturbed. On the other, it is very blue indicating strong star formation is going on. Still, I doubt it had anything to do with Arp 69\'s present condition. The Kanipe-Webb book indicates it resembles many very early galaxies seen in the Hubble Ultra Deep Field image. An early galaxy seen in today\'s universe. In the early universe, galaxies were gobbling up their smaller siblings at a high rate leading to rather distorted galaxies. The universe was much smaller then so galaxies were rather tightly packed making this rather common. It may just be Arp 69 is still digesting some small galaxies, similar to the companion. Certainly, star formation is going on in it at a very high rate which a recent meal could easily cause. If you want an external candidate better than the companion look to the northeast. PGC 051285 is a very distorted, sliver of a galaxy beyond the orange star, at virtually the same redshift as Arp 69. Arp 69 was discovered by William Herschel on May 1, 1785. It is not in either of the Herschel 400 observing programs.

Northeast of Arp 69 is a galaxy cluster anchored by a large galaxy. Both are 2.3 million light-years distant. The cluster is MaxBCG J215.23106+35.23001 with 24 members. No size is given but it appears rather condensed around the position of the core galaxy from my image.

Just southeast of Arp 69 is a somewhat elongated, but nearly starlike object I\'ve listed as both a galaxy and a candidate BLAGN (BLAGN stands for Broad L Active Galactic Nucleus, often indicating a quasar). Some catalogs list it as a galaxy, NED lists it both. Since it is elongated and not a point source it appears some hint of the galaxy harboring the black hole is seen. It is quite close, as quasars go at only 2.5 billion light-years. At magnitude 19.5 it is quite faint for a quasar as well. Must be nearly out of fuel.

A couple NGC galaxies are in the image and several more are just outside its borders. This area would be great for someone with a near one degree FOV with quite a few major galaxies besides Arp 69 in the frame. The other two NGC galaxies each have two different NGC entries. NGC 5588 was first seen by William Herschel on May 1, 1785 and given the NGC 5589 entry. Later on May 9, 1826 his son John recorded it as a different galaxy causing the NGC 5588 entry. Later on April 24, 1827 he recorded it again but at the right position. Apparently not realizing it was the same as the one he say 11 months earlier. A similar father son mix-up happened with 5580/90. William saw it first on May 1, 1785 resulting int the NGC 5590 entry. John saw it on May 9, 1826 and recorded it as the same galaxy his dad saw earlier (note this is the same night he didn\'t do this with the other galaxy. But then on April 27, 1827 he recorded it at a slightly wrong location not realizing it was the same galaxy and thus it got the NGC 5580 entry. Neither of these two are in a Herschel 400 observing program.

While many galaxies in the field had distance data and are listed in the annotated image some rather bright ones did not. In fact, most of these didn\'t even have a catalog entry that was more than its position. The lone exception is shown near the bottom left of center with its PGC number and no distance.

I\'m often asked how deep do these images go. The faintest object with a magnitude given is a quasar northeast of NGC 5580/90 with a magnitude listed by Sloan as being 23.1 in their green filter. It\'s also the most distant object with a redshift of over 4 which puts it at over 12 billion light-years distant. This image was taken on April 20, 2010. Then lost on my hard drive until 2016. Back then I had much dryer skies with great transparency. Today I\'ve usually got hazy skies which make it hard to reach even magnitude 22 much to my dismay. The haze seems to have come with warmer weather than we had for decades prior to about 5 years ago. Global warming? If so things will only be getting worse. Doesn\'t help that seeing has gone down as well which means stars are larger and thus fainter also limiting how faint I can go for point sources. This doesn\'t bother faint objects that aren\'t point sources as to how faint I can go but does mean fine detail in them is lost. 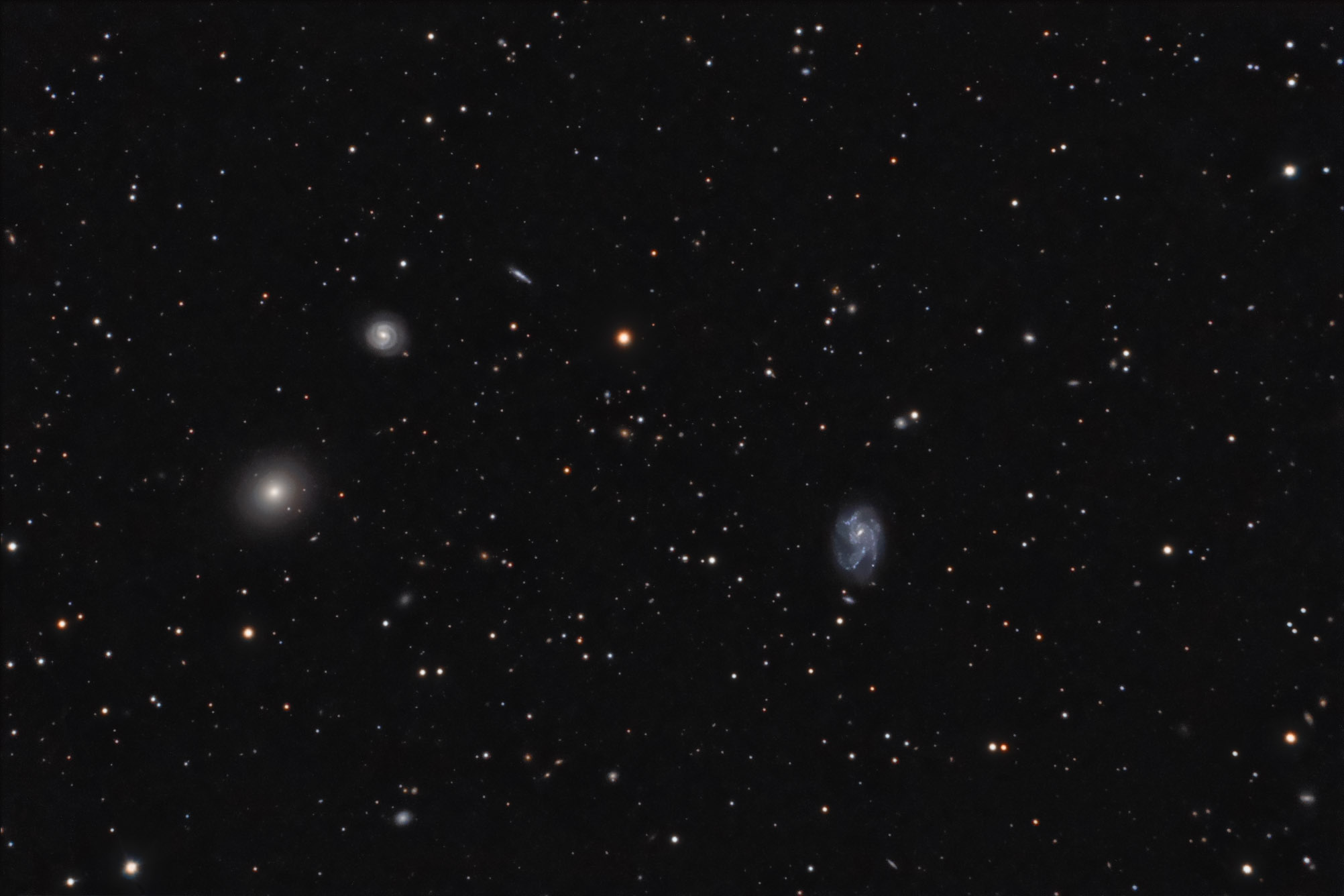 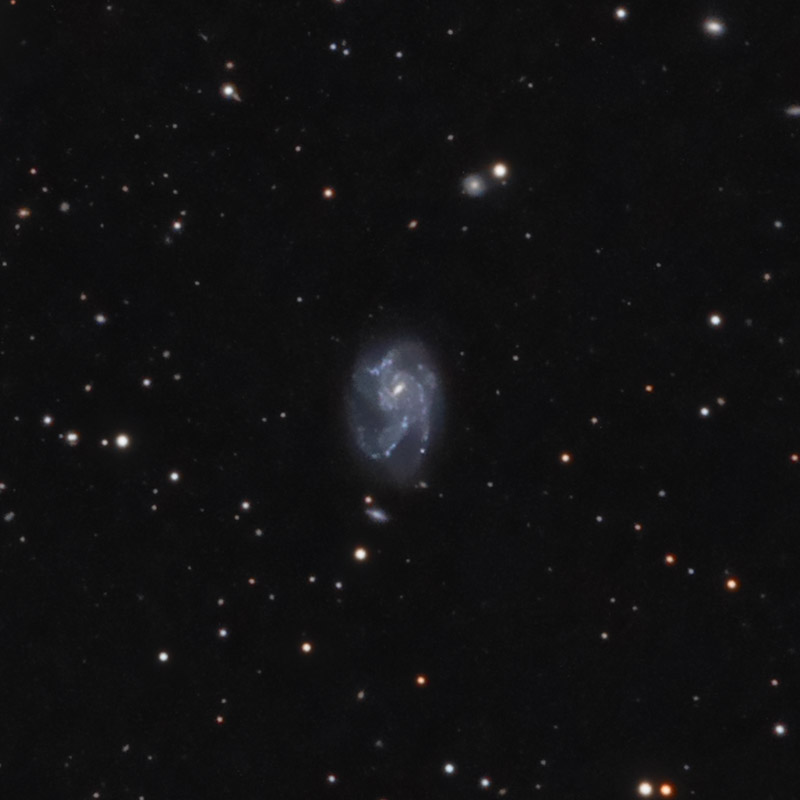 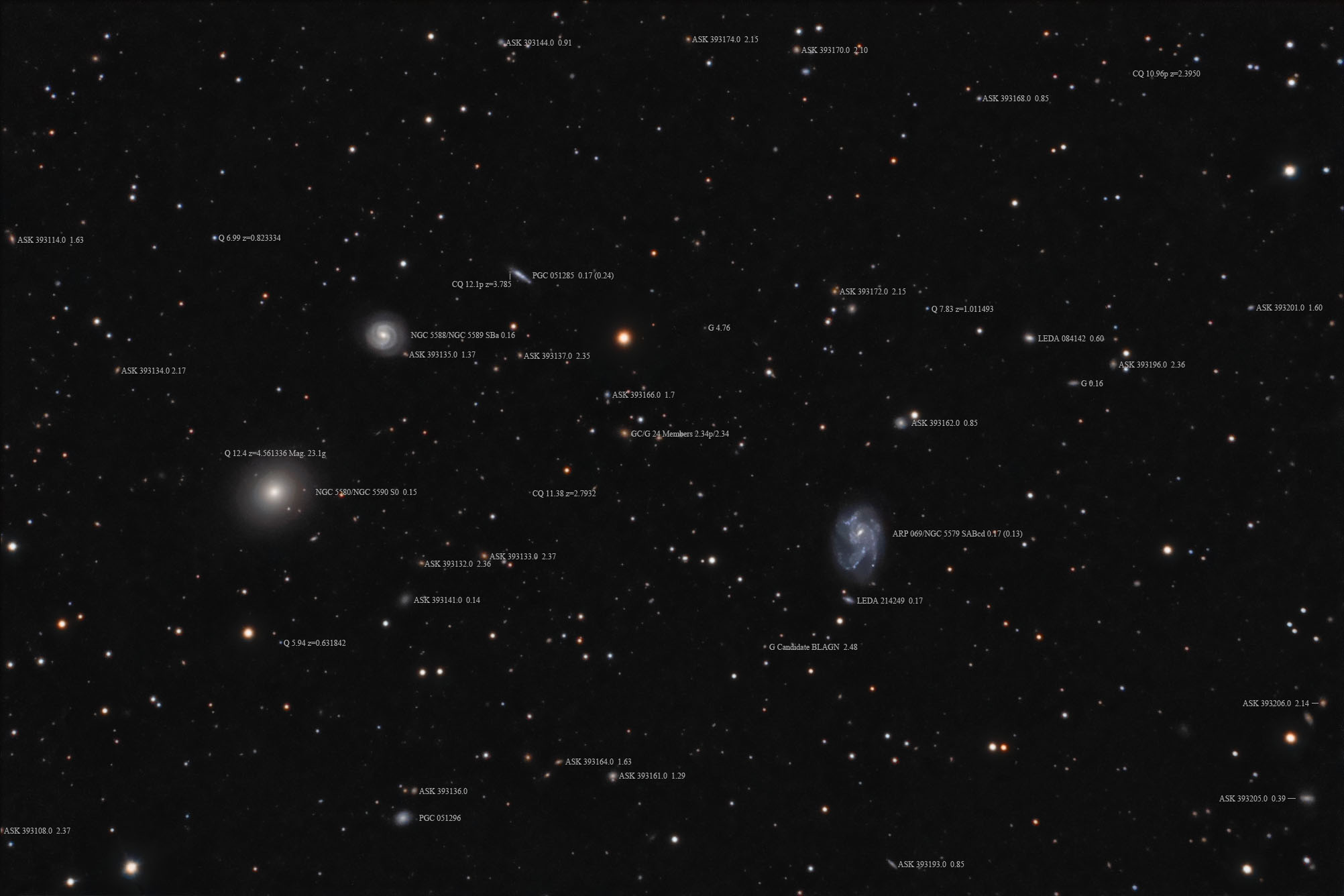