Arp 73 is a pair of galaxies in Northern Hercules at about 415 million light-years. It falls under Arp\'s class \"Spiral Galaxies with Companions on Arms: Small, high surface brightness companions.\" Their general catalog names are IC 1222 and SDSS J163514.15+461232.6 right to left. IC 1222 is classed by NED as SAB(s)c. Arp\'s comment: \"Arm leads toward, but not up to companion.\" In my image it looks like the arm does pass by the companion and overlaps the tidal arm toward IC 1222. That seems in conflict with Arp\'s comment unless he was talking only about the core of the companion. I find no classification of the companion. It reminds me of M110 and its tidal arms due to M31 though the arms of M110 are fainter. NGC 1222 was discovered by Lewis Swift on July 10, 1890 as was IC 1221 discussed below.

When taking this image I knew IC 1221 was at the very top but thought I\'d left enough room for it. But after seeing the full 10 minute subs the next day I realized it had a faint arm that stuck out from the others that came off the eastern side and went nearly straight north out of frame before curving west. I tried retaking the data the following night but seeing was a good 1\" worse so after two frames I quit the effort. Somehow I forgot about it until starting to process it some 8 months later. Thus I missed the interesting part of IC 1221. It is unrelated to Arp 73 being only 250 million light-years away. NED shows it as an Sd spiral. To the northeast of Arp 73 is a small galaxy that appears to be a neighbor as it has a distance of 425 million light-years. Then to the west-northwest of Arp 73 is SDSS J163357.26+461701.6 at 415 million light-years, the same distance as Arp 73. Directly below it is another member of the group, SDSS J163353.82+460932.2 at 412 million light-years.

I\'ve attached an annotated image with the distance to Galaxies and Quasars listed. Just southeast of Arp 73 is a quasar candidate so I used QC to identify it. Seems that it isn\'t a point source and is elongated from the southeast to the northwest. My software reports it has a FWHM diameter of 2.89\" while the stars in the area average about 2.1\" with the largest being 2.25\". Well under this object. So I am seeing a galaxy here that might contain a weak quasar or AGN of some type at least. Then toward the east-northeast edge of the image is yet another quasar candidate with a FWHM of 2.7\" while all the stars around it are about 2.1\". This would again indicate something that is not a point source as you\'d expect a quasar to be. This one is 3 billion light-years distant.

Also marked on the annotated image is a candidate galaxy cluster listed as NSC J163438+462142 at 1.8 billion light-years. Unfortunately no size or galaxy count is given. I\'ve noted the position of the center of the cluster (just south of NGC 1221) but there\'s nothing right there. Most galaxies in the area have no red shift data. Of those that do, one south of the location is at 1.7 billion light-years and likely a member. What about those around it? The only other ones with red shift data are far beyond the cluster\'s distance. I wish I had more information. A far better galaxy cluster with information is found in the lower left corner of the image, ZwCl 1635.0+4613 at 3.1 billion light-years. I\'ve noted what is said to be the center of the cluster. Many galaxy clusters have a one or two large elliptical galaxies that anchor the cluster. Those appear just south of the center. They likely get to be the big gorillas of the cluster by feeding on smaller members. The cluster contains some 196 members in a 15 minute radius of the center. I found no red shift data on individual galaxies in the cluster.

As usual, I have a blue, low surface brightness galaxy that the SDSS has either missed or NED isn\'t including. It is in the northeastern quadrant and identified by a question mark. Note that right on its north edge is a star-like object. That is at the exact location (to 0.05\" of arc by my plate solve) of the position of SDSS J163631.38+461934.7 a 22nd magnitude galaxy. There must be a systematic reason why these galaxies are missed but I don\'t know what it is. Yet another of these is at the top edge on the left. Again marked by a question mark. The galaxy below the question mark, almost providing the dot is 16h35m55.7s +46d23m02s a 20.5 magnitude galaxy.

Arp\'s image, very different than mine. At first I thought I\'d imaged the wrong galaxy until I looked more closely. His is under exposed compared to mine.
http://ned.ipac.caltech.edu/level5/Arp/Figures/big_arp73.jpeg 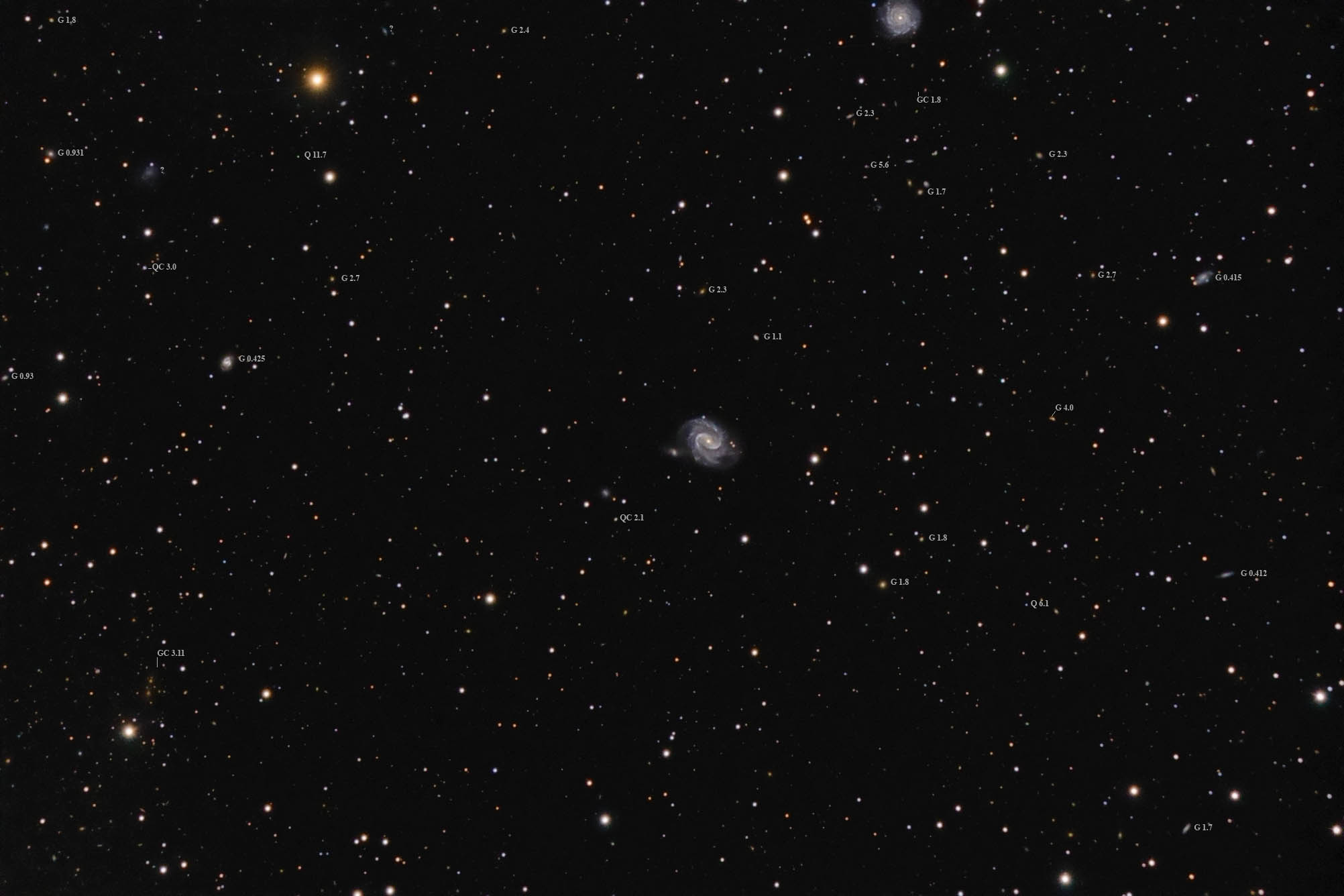 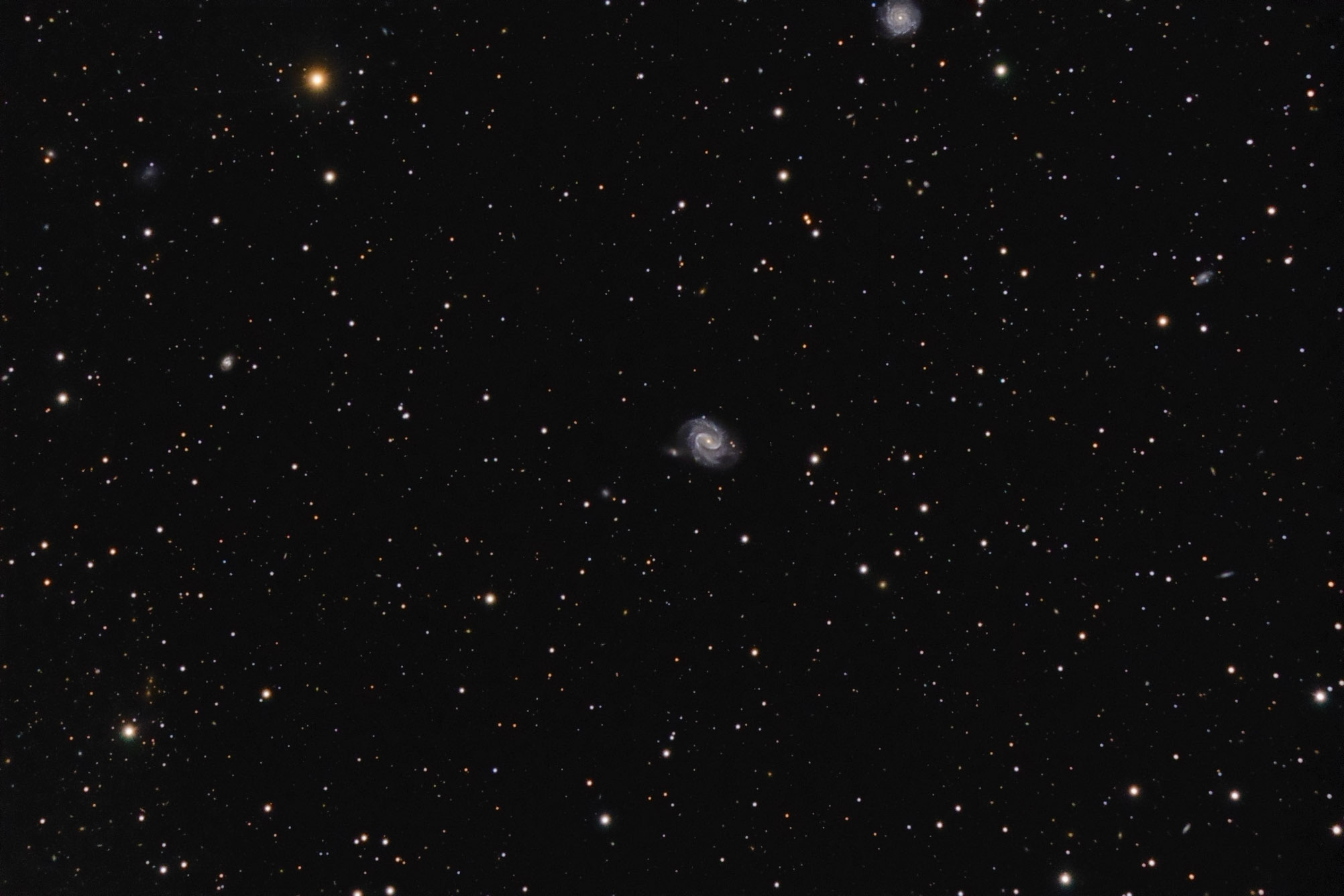 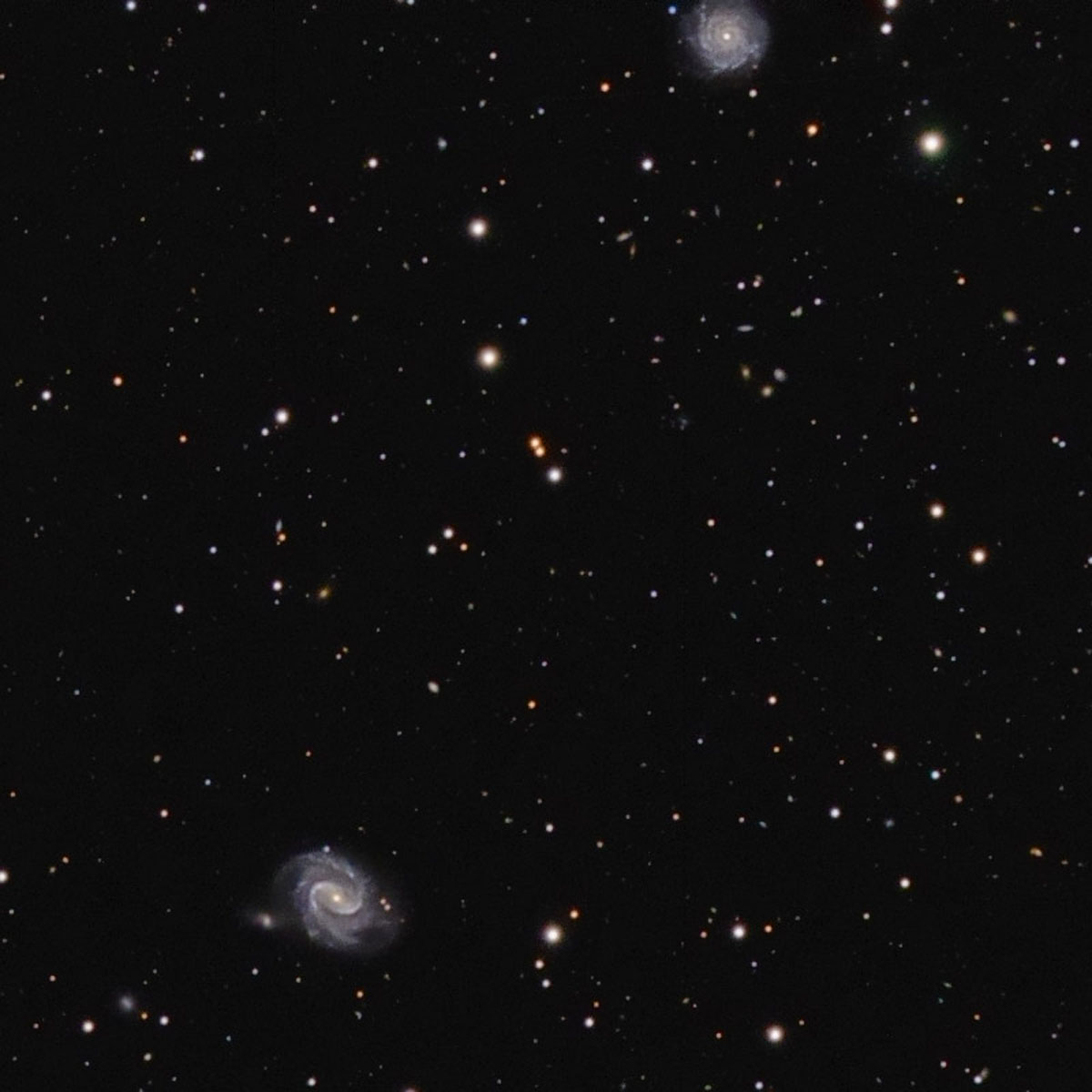