Arp 87 is a pair of galaxies in northeast Leo about 335 to 340 million light-years away. Arp put it in this category of spirals with large high surface brightness companions on arms.\" His comment is more telling. It reads \"Arm appears wrapped around cylindrical companion.\" His was a pure descriptive narrative. He left it to others to explain what was going on. In this case, we have a pretty good idea and it\'s quite interesting. This appears to be the formation of a polar ring galaxy caught in the act of formation. The companion is well underway of becoming a polar ring galaxy.

A note at NED references an article about the strange velocity distribution of the companion galaxy\'s disk and forming a ring is at: http://adsabs.harvard.edu/cgi-bin/bib_query?1994A%26A...291...57R A summary at NED reads: \"The gas radial velocities on the major axis of the galaxy give evidence of very peculiar kinematics: photometric and kinematic centers differ by about 0.3 kpc. Rotational velocities after the global maximum at r~3\" (1.4 kpc) show a rapid decrease to zero velocity (!). The rotation curve of the forming polar ring represents almost a straight line ({sigma} = 9.3 km/s) with a gradient of 12.9 km/s/arcsec (28.7 km/s/kpc). The crude estimation of mass to B-luminosity ratio is 3 f_sun_.\"

This one has attracted the interest of enough astronomers that the HST was used to study it. The resulting image is at http://dic.academic.ru/pictures/wiki/files/65/Arp87full.jpg
This really shows the ring being wrapped around the galaxy quite clearly. Though to my eye, it seems to change the direction of its rotation. I can\'t quite wrap my mind around it.

Just beyond the \"companion\" is a nice near edge on spiral that shows a lot of detail in the Hubble image. I couldn\'t find any redshift data on it. In fact, I couldn\'t find it! NED has the faint 22.3 magnitude star just of the tip but not the galaxy itself. It\'s amazing what gets left out of these databases. Dennis Webb did a lot of work identifying galaxies in Arp fields but he couldn\'t find this one either. He does though draw a diagram of how the arm wraps around the companion. I can\'t quite see it however as mentioned above.

To the lower right of Arp 87 is a candidate galaxy cluster at about 1.5 billion light years. NED has no data on its size or galaxy count. Many possible galaxies are in the area of the label however which is centered over the location. It reads \"GC 1.5\". The candidate cluster is NSC J114001+221959.

Below and further left of these two is an obvious pair of spirals that do both have redshift distance and they are virtually identical at 1.2 billion light years. Though I see no hint of interaction as I may be seeing with the previous two. Between these two pairs is what may appear to be yet another pair but the rightmost object is just a foreground star in our galaxy. The distance to the galaxy is unknown.

A lot of galaxies I\'d like to know the distance of, have yet to be measured. In the lower left corner, for instance, are several galaxies of about the same angular size and brightness. The two with known distances are widely separated, however. What about the others. Could the blue near and redder twice as distant? Color can be a good distance indicator but it can be a great way to go wrong with confidence as well. 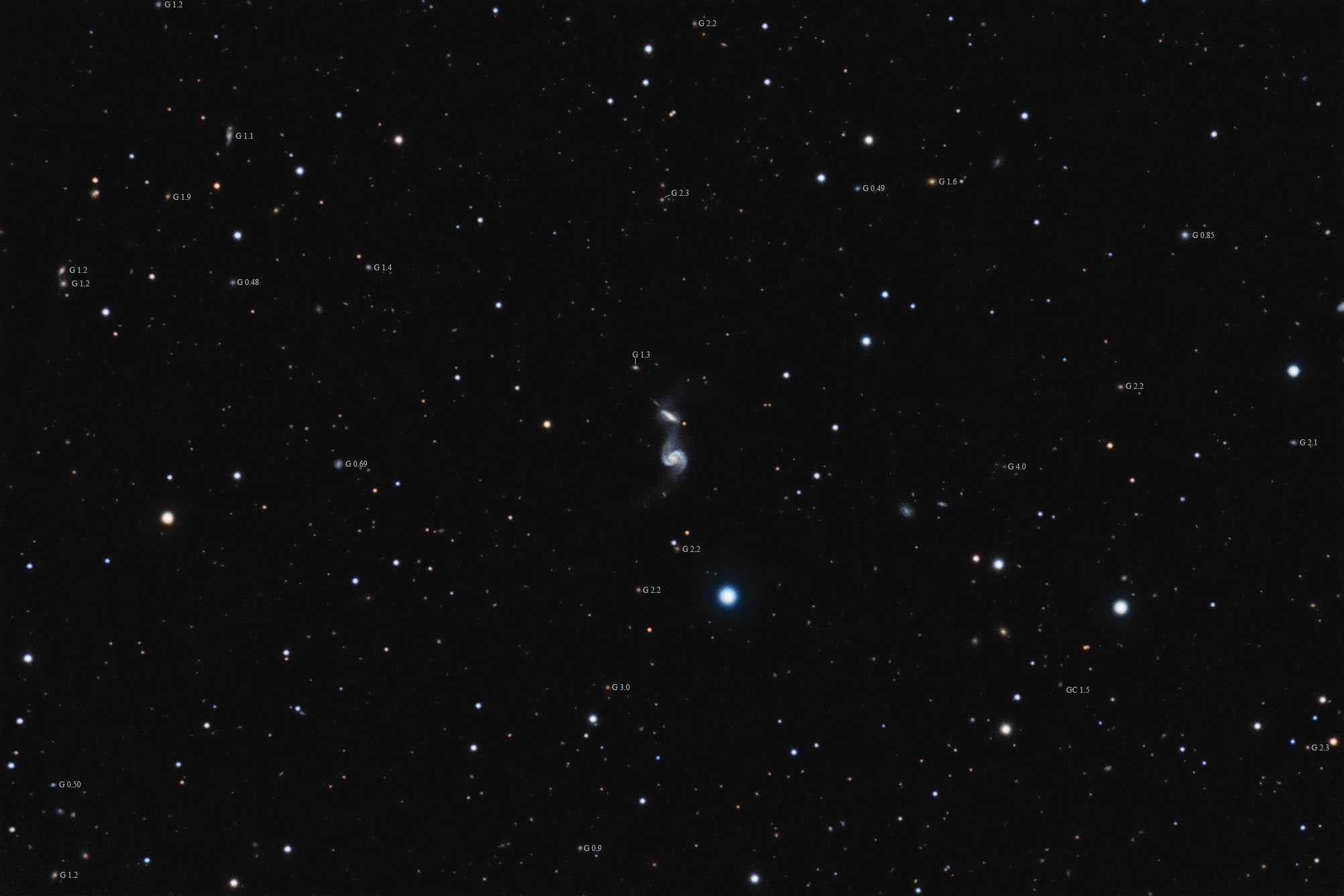 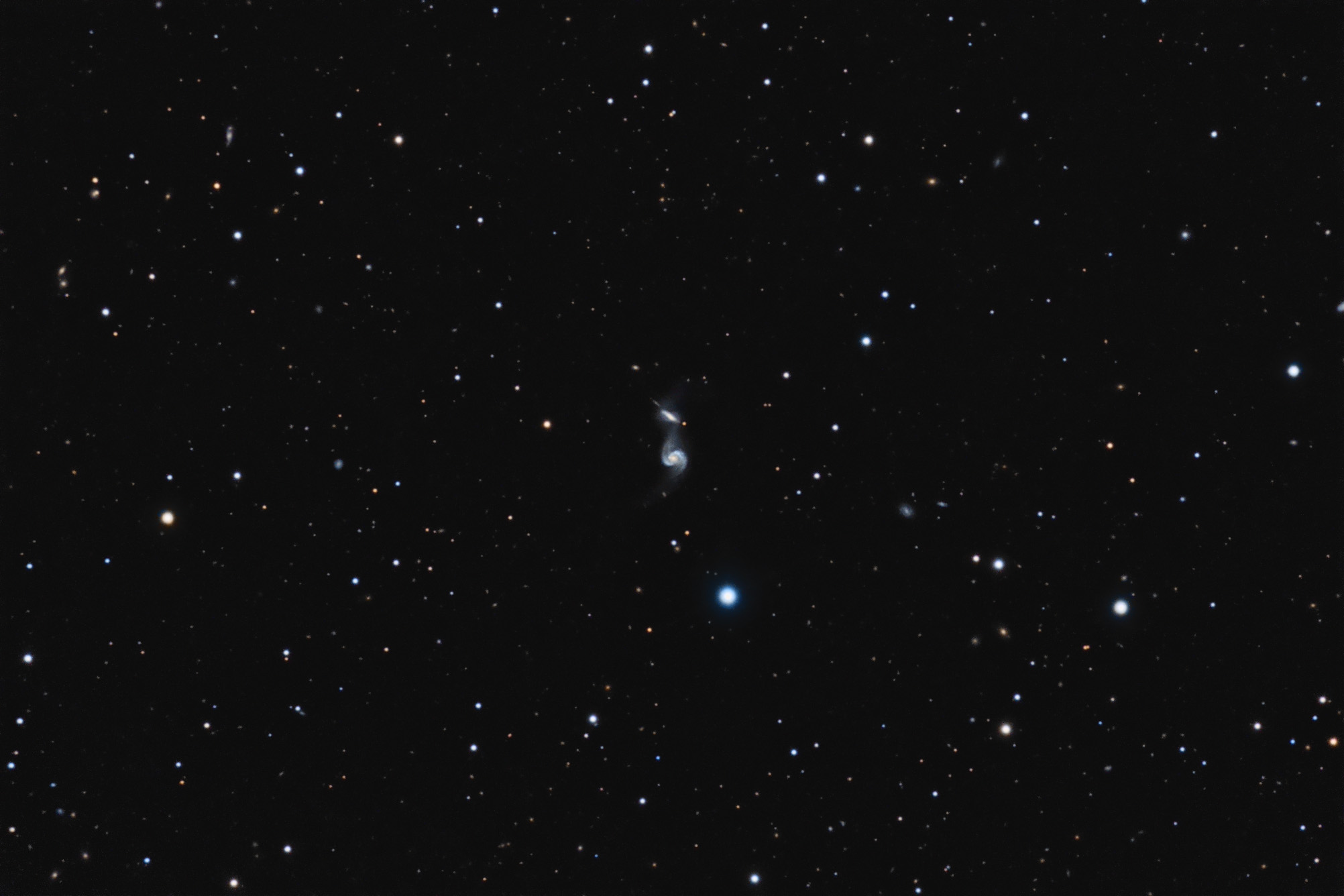 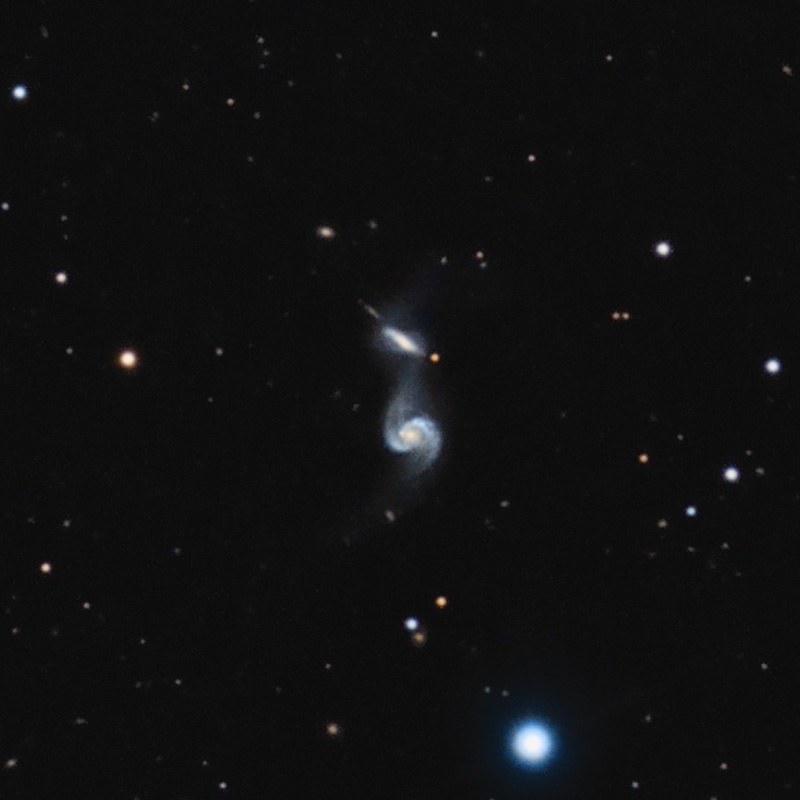