Arp 90/NGC 5929-30 is an interacting pair of galaxies about 120 million light-years away in the constellation of Bootes. Arp put it in his classification for spirals with high surface brightness companions on the arms. He recorded this comment: \"Absorption lanes around companion.\" This pair should be visible in an 8\" telescope for those going after these visually. It was discovered by William Herschel in 1828 using an 18.7\" speculum mirrored reflector. At least NGC 5930 was or maybe he saw both as one object. It isn\'t in either Herschel 400 observing program.

NGC 5929, on the right, is classed as Sab Pec and is a Seyfert 2 galaxy. It was discovered on May 13, 1828 by John Herschel. NGC 5930, on the left, is classed as SAB(rs)b pec at NED and SBb/P by the NGC project. Several notes at NED say 5930 has a starburst nucleus though this isn\'t mentioned in the classification at NED. Both the Seyfert 2 status of NGC 5930 and the starburst core of NGC 5930 can be an indication of interaction though either can occur without it. Here it appears interaction is involved.

\"Behind\" Arp 90 off its lower left side is a small blue blob. Is it a plume or a separate galaxy. It appears to be a low surface brightness galaxy in my and the SDSS image but NED shows nothing at this position. Thus it is marked with a question mark on the annotated image.

To the northeast of Arp 90 is UGC 09857 at 110 million light-years by redshift. This difference is rather insignificant and can easily represent the relative motion of related galaxies. It is classed as IBm. Is it naturally irregular or has it had a nasty encounter with Arp 90? I found nothing on it either way. It sure is interesting looking. Wish we could see these from a closer vantage point.

The annotated image shows some interesting things. Arp was a strong believer that quasars aren\'t distant massive black holes on a feeding frenzy in distant galaxies but are nearby objects ejected from galaxies. This puts him in the near crackpot category of many astronomers. His theory goes that as time passes their redshift increases. Why requires rewriting physics. Read the Kanipe-Webb book on the Arp Atlas for the details. He cites several galaxies in which the redshift of the quasars in the field increases with angular distance from the galaxy. That appears to be the case here. The one nearest Arp 90 has the lowest redshift value (converts to distance as 6.2 billion light-years) increasing (using today\'s accepted distance conversion of redshift) to 8.1, 10.5 and finally 11.3 billion light years. One minor hitch is one to the east that\'s even further from Arp 90 but is only 9.2 billion light years distant. Of course, Arp says those distances are false as all are about the same distance as Arp 90. The odd one is explained that the ones with higher redshift are really further from Arp 90 but only appear closer when projected onto a 2 dimensional image plane. Of course, by that logic, nearly any distance could be supported. You could just as easily say the one at 6.2 is really the furthest as it is was ejected away or toward us and thus the distance we see is greatly foreshortened. From what I read in Kanipe and Webb\'s book this didn\'t seem a problem to Arp.

In any case, after several fields without any quasars, there are at least 7 in this image ranging out past 11 billion light-years by established redshift theory.

There are a lot of galaxies, many fall into two very precise distance measurements. One set at 1.0 billion light-years and another nearly twice that at 1.9 billion light-years. The latter pretty much covers the entire field. Also noted in the annotated image is the center position of the galaxy cluster Abell 2080. It is listed as 30 minutes in diameter. It would extend from its position near the eastern edge of my image to the middle of the image. That doesn\'t fit the distribution of either of the two distance groups in my image. The catalog gives little other help just saying it is \"distant class\" 6. All that means is the 10th brightest member has a magnitude between 17.3 and 18.0. Most of both the 1 and 1.9 billion light-year groups fit that range but extend beyond the 30 minute diameter. So which galaxies in the image are part of the group? I have no idea. 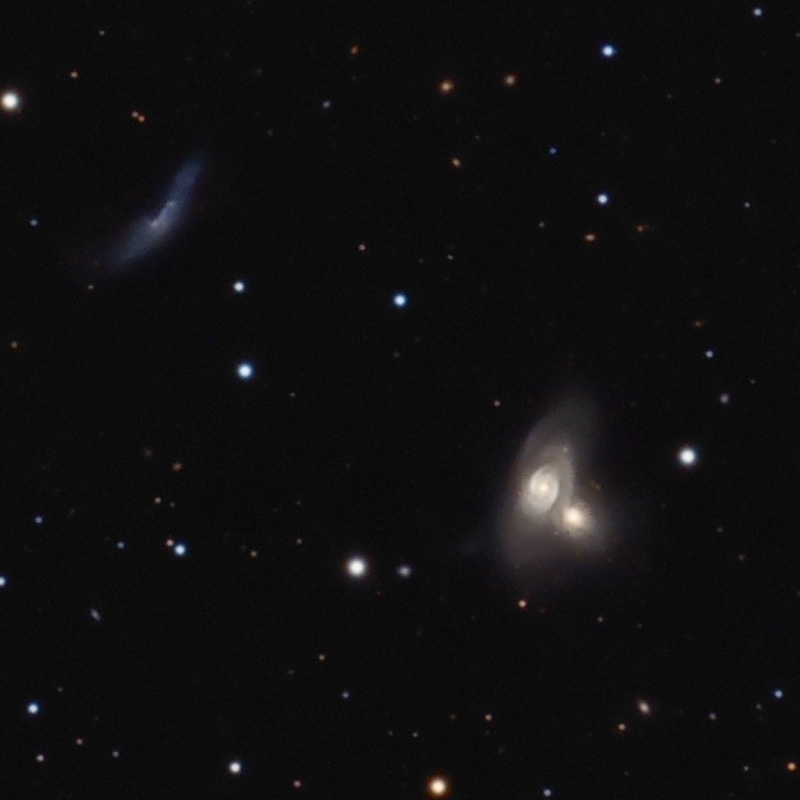 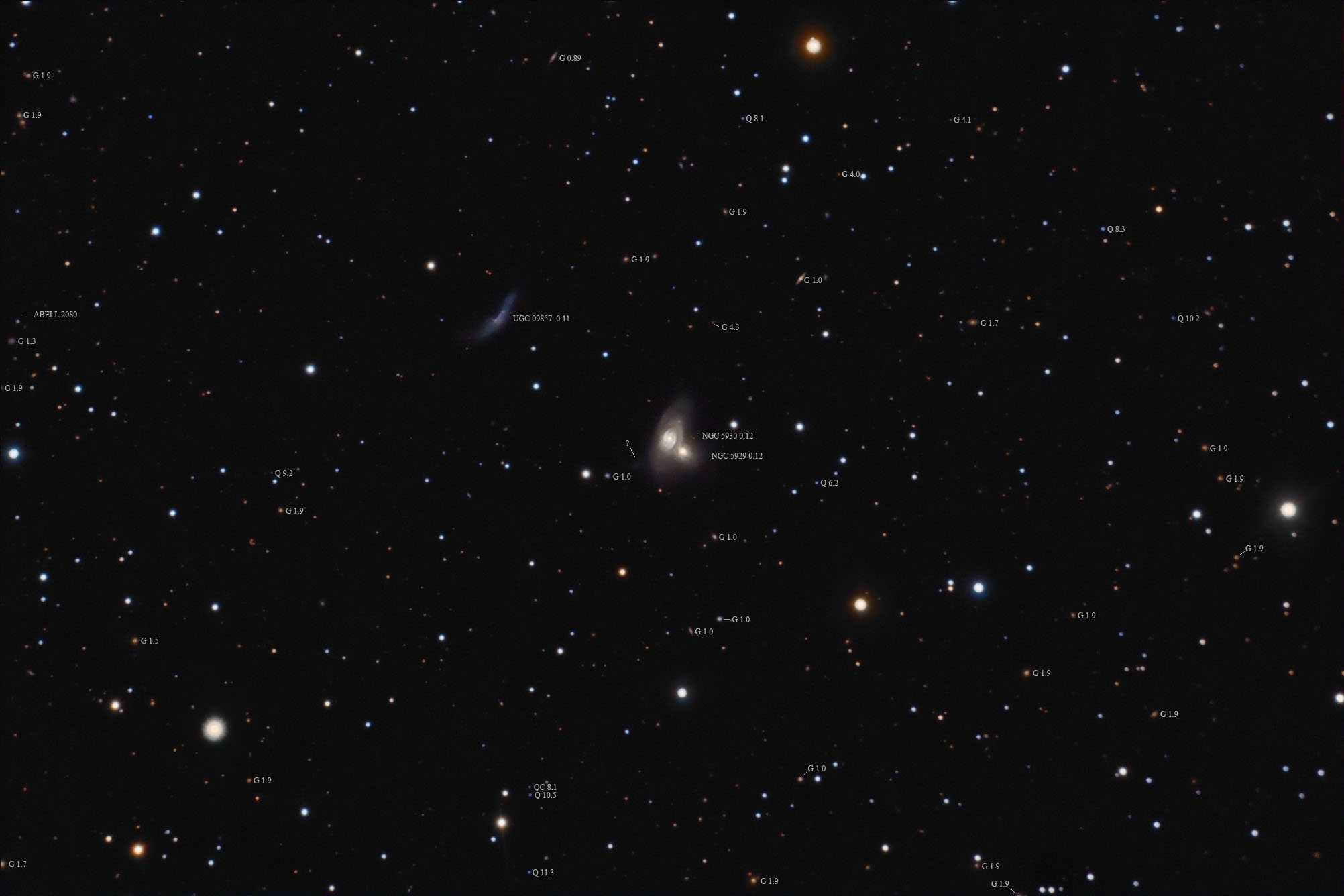 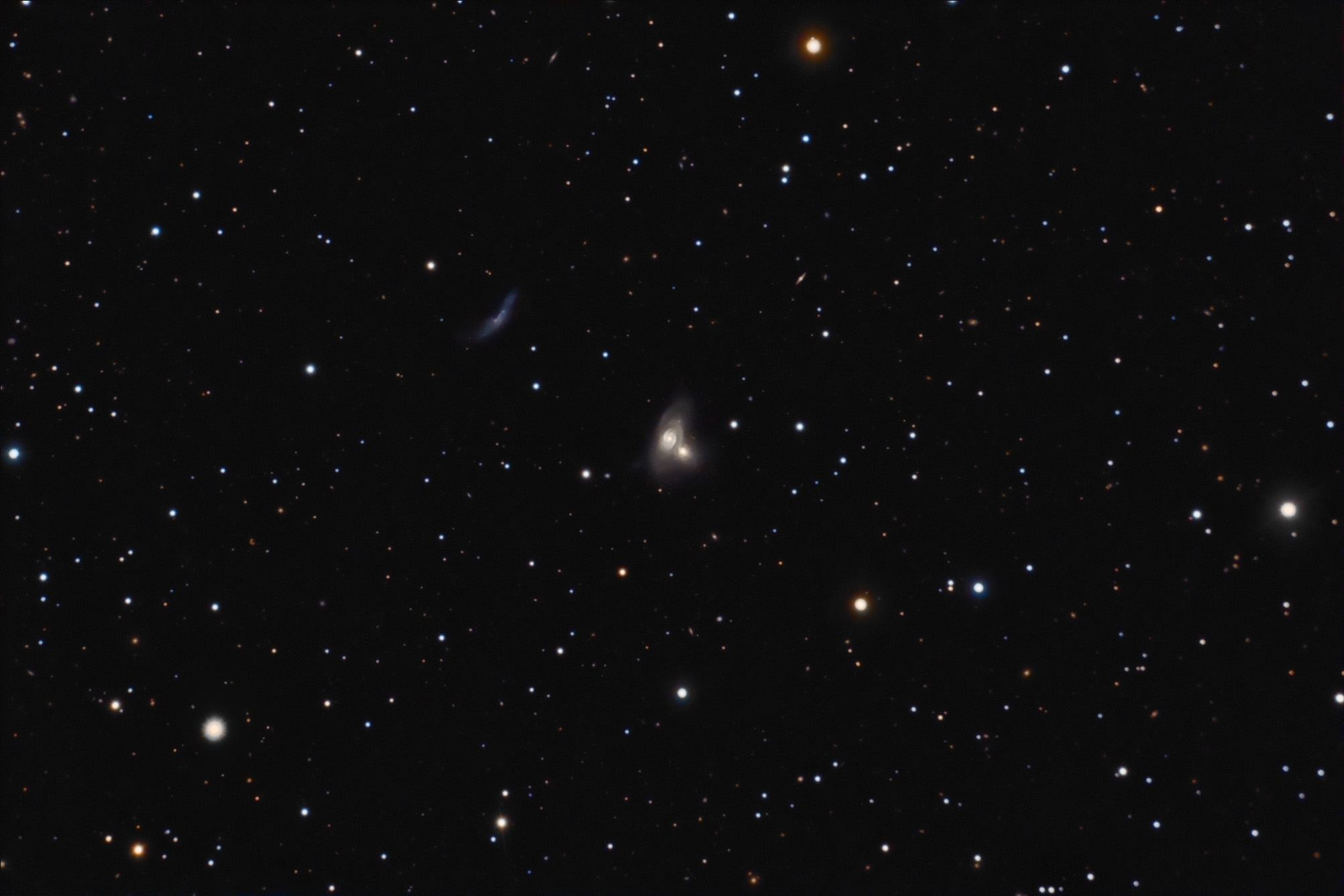