Arp 92 falls under Arp\'s class: Spiral galaxies with companions on arms: Elliptical galaxy companions. If by \"companion\" Arp includes unrelated line of sight galaxies then this might be true. In this case red shift data, possibly not known when Arp prepared his catalog, shows the main galaxy, NGC 7603 has a light travel time distance of 385 million light years while the \"companion\", NGC 7603B is at a distance of 728 million light years, nearly twice as far away. So it isn\'t the cause of the distortion and tidal plume coming from NGC 7603. Or is it, NED lists a couple papers that do consider it a true companion even acknowledging the red shift difference. Arp comments: \"Very faint connection shows better in red.\" Indicating he sees this plume as a true linkage. In later years Arp denied red shift necessarily indicated distance though at the time of the catalog he hadn\'t come to this belief. It is classed as SA(rs)b: pec and is a Seyfert galaxy. So is it a companion or not? I\'ll say no until better evidence is provided. NGC 7603 was discovered by Albert Marth on October 23, 1864.

With time the \"guilty\" galaxy might be some distance away. There are two candidates I find in the image. NGC 7589 to the west (right) is the odd spiral with faint narrow arms. It has a redshift almost identical to that of NGC 7603 that puts it at 389 million light years. It is classed as SAB(rs)a: and is a Seyfert 1 galaxy. So it is the most likely candidate for the true \"companion\". Though in the upper left corner is another possible mugger. It is odd rather \"sloshed\" streak of a galaxy known as ASK 025830.0/SDSS J231929.76+002212.0 at a redshift that puts it a bit further away at 407 million light years. Sometimes an interaction will move the core of a galaxy from the center and toward the galaxy it interacted with. Could that explain this galaxy? All this is speculation on my part. Too bad we can\'t rewind time and see what this system looked like a billion years ago. To me, a more likely cause is a merger. The plumes caused by a merger in the past.

Adding to the confusion is that the galaxy Arp considered the companion, NGC 7603B is also a Seyfert 1 galaxy. Probably just a coincidence. Some galaxies just have an active core. That could be the case here.

West of Arp 92 beyond and a bit below NGC 7589 is an odd, apparently double, very blue, galaxy. As I\'ve mentioned many times before these are often excluded from the SDSS catalog as listed in NED. This is another example. It was picked up by the automatic plate survey so is listed under it as APMUKS(BJ) B231533.01-000313.1 It also made LEDA as LEDA 135885 but not Sloan. But NED makes the odd classification as Sb or plate flaw! Then to make this more ridiculous they calculate a redshift distance of 377 million light years for this possible plate flaw. It is yet another strange galaxy that is part of the group with Arp 92. So is it a double galaxy or one with a plume or what is it? Is it involved with Arp 92? Note that in my image the upper half is a bit bluer than the lower half. Also, NED classified it as either Sb or a plate defect. Apparently, some things don\'t change when new information is available. You can\'t get a distance estimate from a plate defect by any means I\'m aware of. Things just get curiouser and curiouser as Alice would say.

There are quite a few galaxies right at the limit of this image. They are about 22nd magnitude and about 5.1 billion light-years away. At least a few are of this same distance. I\'ve prepared an annotated image with galaxy and quasar distances labeled in billions of light years. As usual, the label is just right of the object unless this isn\'t possible without hiding something. You may need to enlarge the image to see some of these little faint guys. My limiting magnitude here was about 22.4 in green light. NED lists some 5000 galaxies in this image with a redshift value. The annotated image only shows a few that interested me. 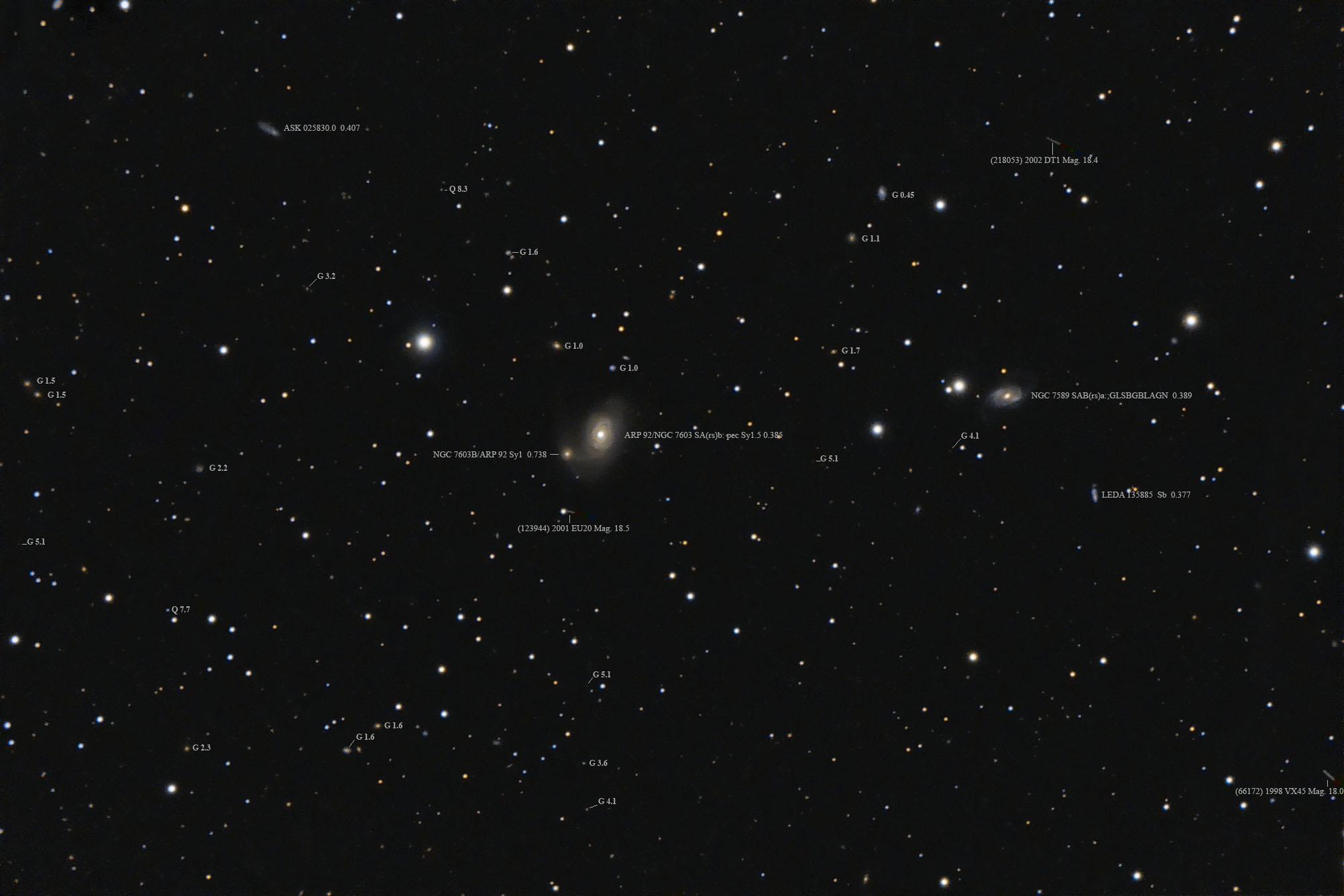 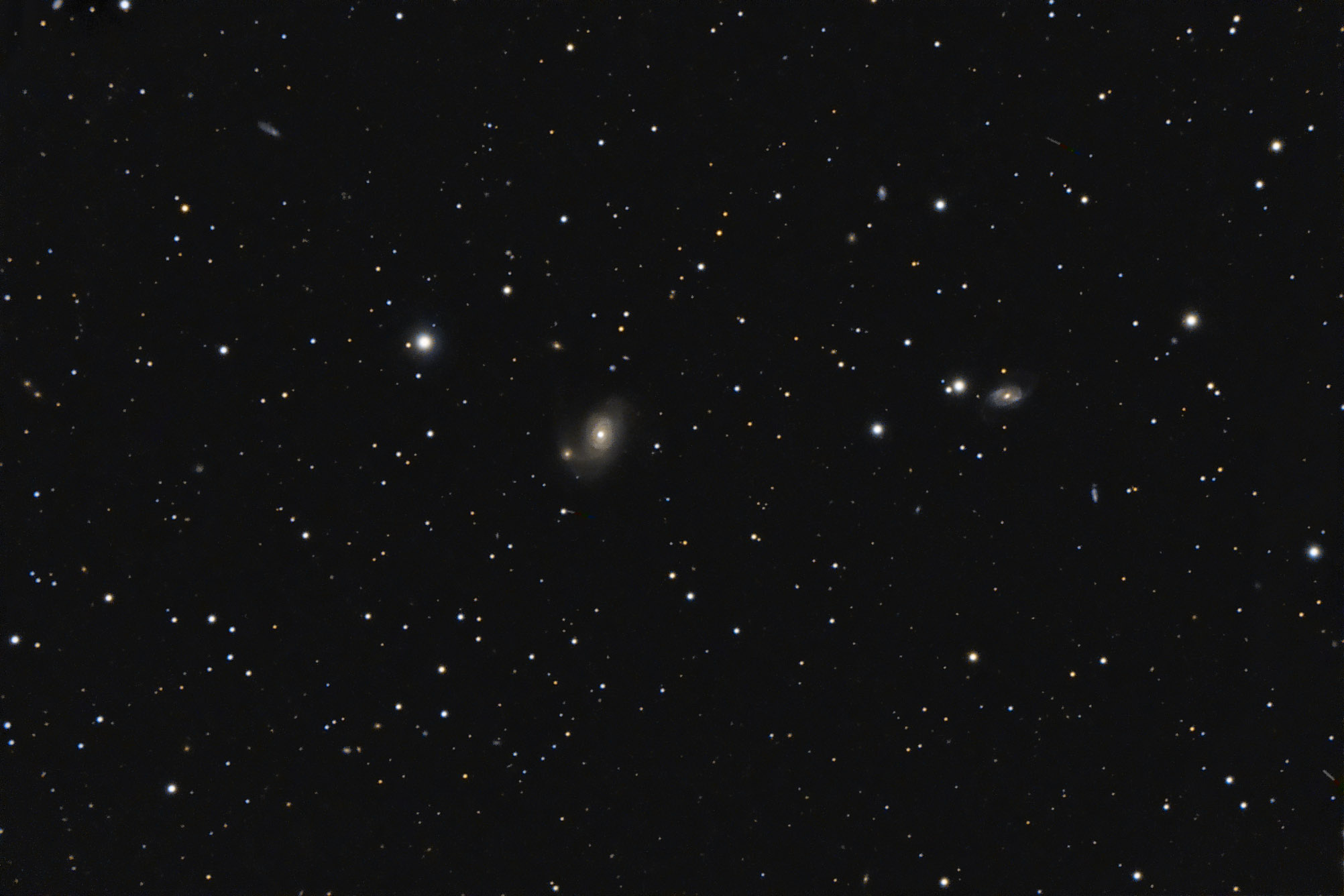 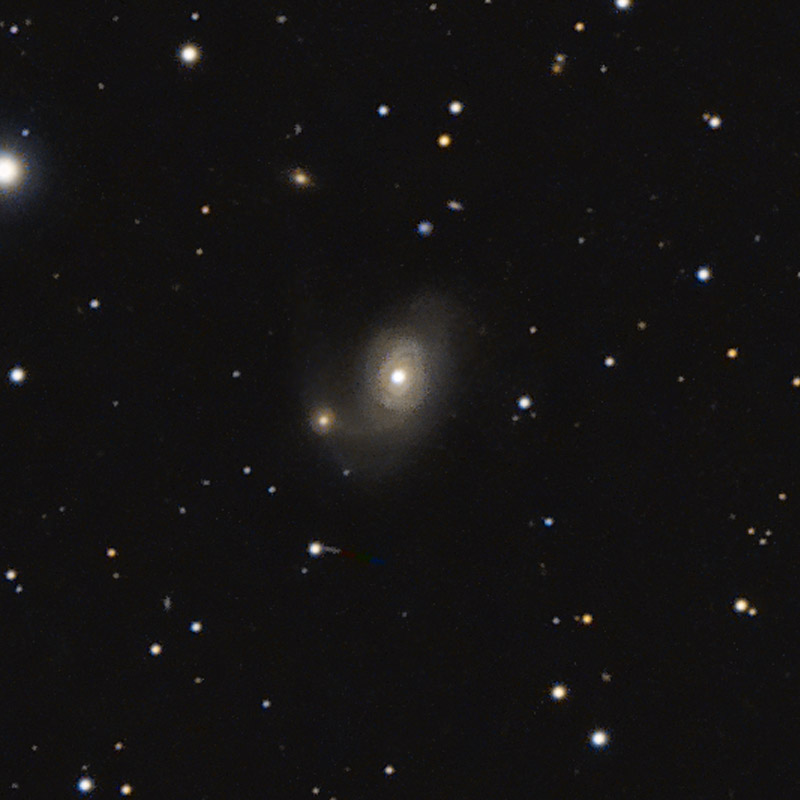