Arp 96 falls under Arp\'s category for spiral galaxies with elliptical galaxies on their arms. They are located 205 million light-years away based on their redshifts which are virtually identical. But we can\'t say the elliptical is on the arm of the spiral. It would be better to say it appears to be on the arm. If it really were I suspect the arm (more a plume) would be more highly distorted. Arp stated his categories as if they were fact when they were more how they appeared to him. In some cases the galaxy on a spiral\'s arm is now known to be a far distant galaxy. His other categories were often incorrect. Especially those that he said categorized as material ejected from the nucleus. That\'s not true for any in that category that I\'ve been able to determine. In this case, their redshifts are virtually identical indicating they are closely related but that doesn\'t mean one is on the arm of the other. Still, interaction likely is why the spiral\'s arms are so distended. Also, note the faint arc of stars at the southern end of the lower galaxies halo about halfway to the red star below it. Why is this short arc so well defined? I found nothing on it.

Arp\'s comment on this pair reads: \"Faint diffuse counter arm, and arm leading to companion.\" These don\'t follow the curve of the two arms of the spiral galaxy and lie beyond them. They appear even more diffuse than the spiral which is surprisingly diffuse for a spiral to begin with. I would call them plumes rather than arms. It appears to be an old spiral in which star formation ceased several billion years ago turning it somewhat red in color as the bluer stars have all burned out and turned to faint white dwarfs, pulsars etc. that give off little light. Since it is usually the hot blue stars that give a spiral it\'s highly detailed features it isn\'t surprising that without them it looks awfully fuzzy. This could be the result of an interaction far older than its encounter with the current elliptical companion but I doubt it.

This pair is known as UGC 03536B/MCG +14-04-10 (spiral) and UGC 3536A/MCG +14-04-11 (elliptical). NED says the spiral is Sc while the Elliptical is just listed as E or E? A note at NED says of it: \"Compact symmetrical object with red envelope.\" The pair is located in Cepheus only 3.4 degrees from the pole. Certainly, it would qualify as the Arp North Pole Galaxy. Imaging this close to the pole is testament to how precisely I\'ve achieved polar alignment. It takes extreme accuracy to go for two hours without image rotation at this declination as any who have tried it can attest. Until the storm forced me to take out my two Polaris trees I\'d not been able to do any imaging in this part of the sky. The Arp 25-114 pair is less than a degree further from the pole. This close to the pole I can ignore my rule of sticking within 2 hours of the meridian as it makes very little difference.

Actually, this is a triple galaxy in the WBL (White+Bliton+Bhavsar groups) and KTG (Karachentsev Isolated Triplets of Galaxies Catalogue) catalogs. The third galaxy is CGCG 362-033/MCG +14-04-014/PGC 020191 among other designations. It is the obvious spiral to the northeast. It is listed as Sa in NED. It appears to have a ring structure in my image not mentioned in the classification. This may be due to my resolution and when seen at higher resolution is not a ring at all. I was unable to find any images of it on the net with even as much resolution as I have.

No other galaxy in the image has a redshift at NED so I didn\'t prepare an annotated image.

This image was taken at 0.5\" per pixel. The image has been cropped however as even cropped it is 3006x2004 pixels in size. These galaxies are quite small in angular size and I took advantage of one of the very rare nights when this was possible.

Arp\'s image of the pair is at: http://ned.ipac.caltech.edu/level5/Arp/Figures/big_arp96.jpeg
For his image, he used 103a-D film. I used a lot of it in my film days before 2415 film was available. I still had part of a 100\' roll in my freezer when I gave up film work. I threw it out as it was about 20 years old as I\'d changed to hypered 2415 years before. It is rather well matched to the human eye for its response covering 4700 to 6000 angstroms. So lops off the blue and red ends of the spectrum passing mostly the region our eye is most sensitive to. Arp used no filter. Since these galaxies are somewhat red I\'d have expected him to have used 103a-E which is more red sensitive. 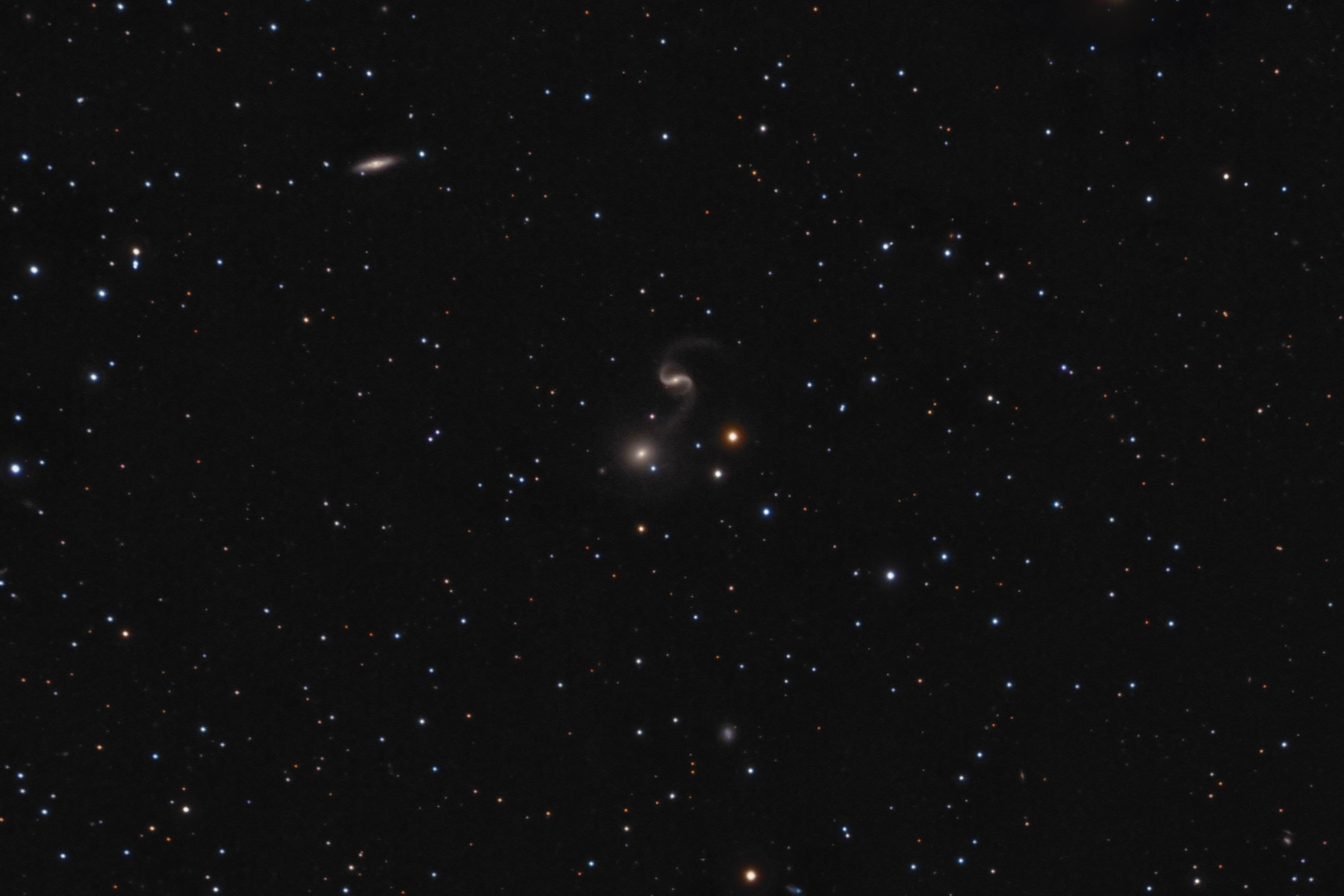