Arp 101/UGC 10164-69/PGC 56938-53 is a pair of interacting galaxies in Serpens Caput just south of the main Hercules galaxy clusters. It is about 215-220 million light-years distant. UGC 10169 is the northern one with the straight tail that resembles one of the Mice, Arp 242. Arp didn\'t see the similarity it seems. He classed this pair under: Spiral Galaxies with Elliptical Galaxy Companions. The Mice he classed as: Appearance of Fission. To me, this shows how seriously he took tARP103-NGC6241-ZWICKY\'S_CONNECTED_MULTIPLE_SYSTEM-ZWICKY\'S_TRIPLETARP103-NGC6241-ZWICKY\'S_CONNECTED_MULTIPLE_SYSTEM-ZWICKY\'S_TRIPLEThe fission concept. Maybe to the point of believing it. In neither case were the huge plumes considered in the classification which I find interesting as well. Arp made no comment on this one. This appears to be a poorly studied pair as I found little on these two.

Only one other galaxy in my image appears to be related to the two galaxies making up Arp 101. That is CGCG 108-089. A blue spiral near the bottom of my image right of center. Virtually all the other galaxies in the image with redshift data are part of a group at about a half billion light-years. A bit over twice as distant as Arp 101. There\'s one galaxy cluster at 2.8 billion light-years marked by a bright cluster galaxy. Redshift data was only listed for the cluster and that was measured photographically rather than spectroscopically so not as accurate, especially for objects this close.

In processing the image I was struck by several bright blue stars. I suspected most were quasars but only one is so listed in NED. Nearly all quasars in NED have redshift data. Unfortunately, this one (left of Arp 101) wasn\'t one of them. Its label in the annotated image reads D? for distance unknown. Edit: Since this was written several years ago, a redshift has been determined and the annotated image edited to show a distance of 4.06 million light-years.

Redshift data is lacking for the vast number of galaxies in this image. I almost didn\'t prepare an annotated image.

In researching Arp Galaxies I come up with some rather odd links. Apparently, there\'s a musical group in England called Arp.101 and they use Arp\'s negative image of Arp 101 for their logo.
http://www.youtube.com/watch?v=kNYG-_Yhs_Q 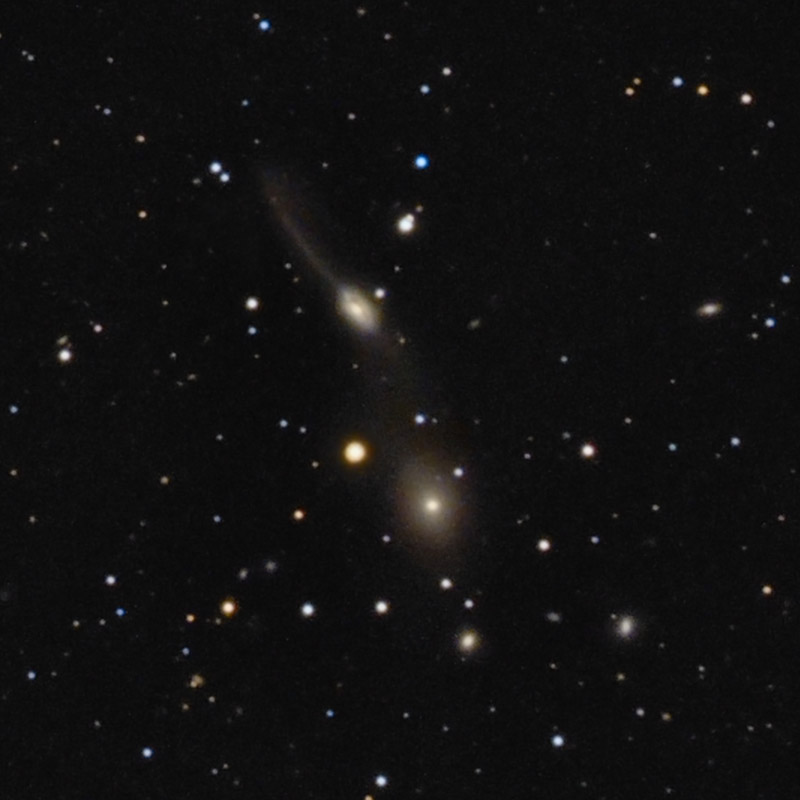 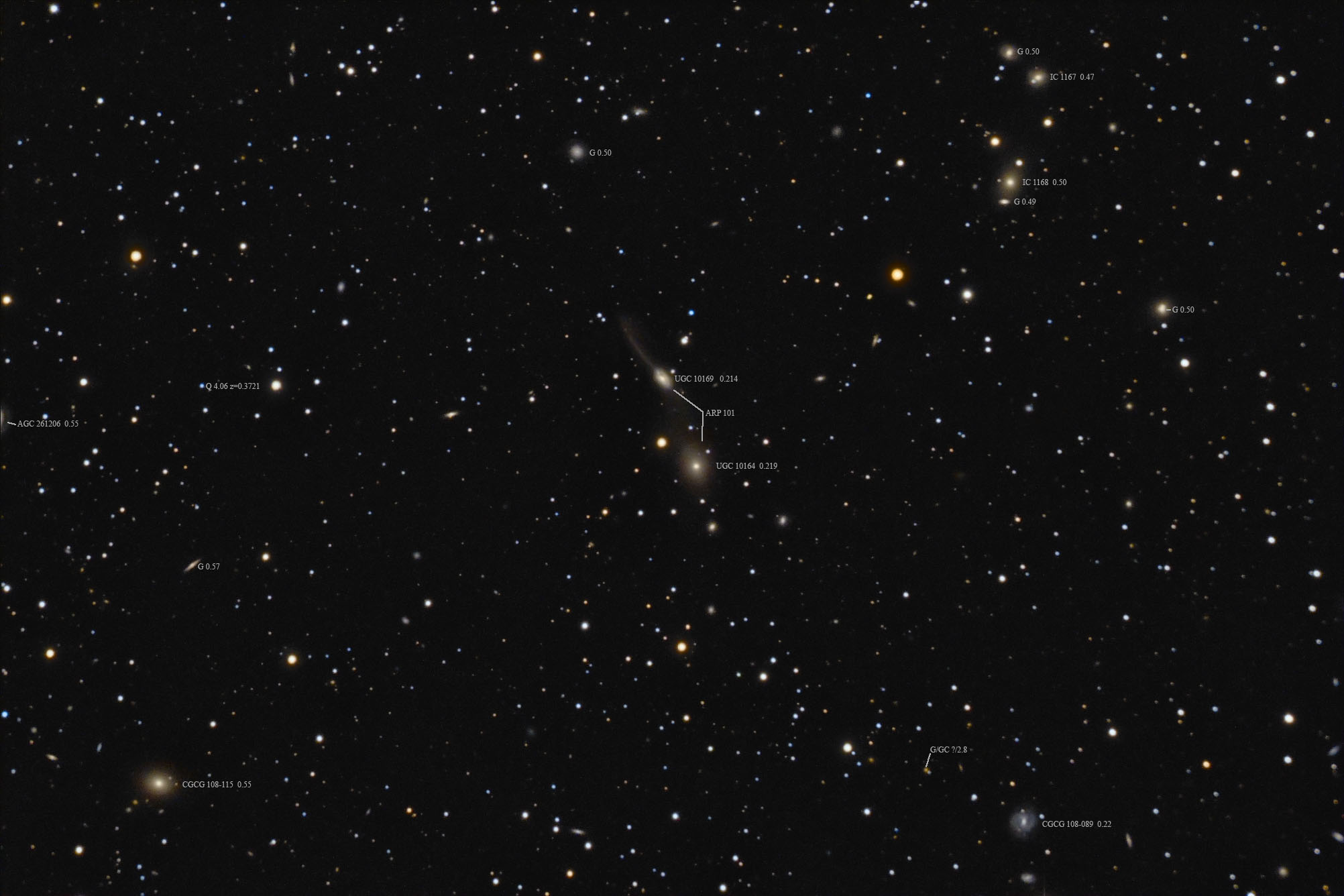 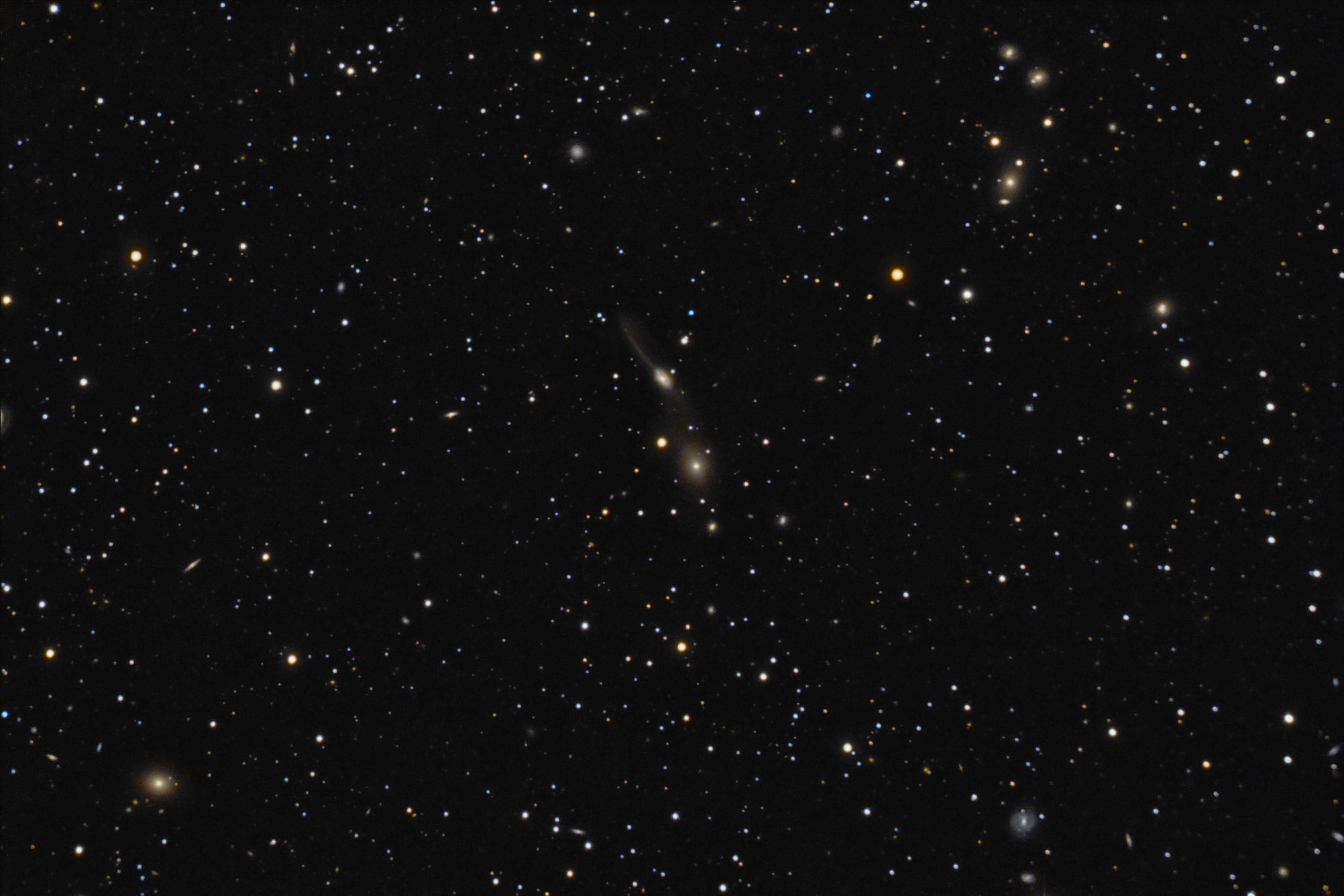