Arp 103 is also known as Zwicky\'s Connected Multiple System or Zwicky\'s Triplet depending on who you read. It consists of three galaxies. They have many different designations, none all that common. NED prefers UGC 10586 Notes 3, UGC 10586 Notes 4 and UGC 10586 Noted 5. Also in the image are UGC 10586, UGC 10586 Notes 1 and UGC 10586 Notes 2. So by the UGC, it is a 6 galaxy system. UGC 10586 notes 2 is better known as NGC 6241. These galaxies are located in the constellation of Hercules at a distance of about 425 million light years. It consists of two southern galaxies, Notes 3 and 4 and a northern galaxy 2.5 minutes north. A faint arm connects Notes 3 and 5. Several knots are seen in it. About halfway between the two is another faint arm running at nearly right angles to the connecting arm which contains a broad extension on the western side. It makes the lower galaxy look much like the Umbrella Galaxy, Arp 189. I can\'t see it continuing beyond this point, rather the plume from the northern galaxy comes down to meet it. Thus there may be no true connection. The horizontal bar is only hinted at in Arp\'s image but appears rather obvious in mine. Also not seen well in Arp\'s image is the large splash of stars that surrounds the southern pair. The knots in the connecting arm appear somewhat blue indicating new stars.

Arp classed this triplet under Elliptical and elliptical-like galaxies connected to spirals. NED classes the three galaxies as: Notes 3 SAB(rs)0+ pec, Notes 4 S0 pec: and Notes 5 as SAB0^+(rs) pec in one reference. None are listed as elliptical but one is S0. So elliptical like fits but which is the spiral? His only comment just says: \"Incomplete connection, blue knots in south member.\" My image seems to show the connection is complete, not only in the narrow tail but a fainter broad tail as well.

You\'ve probably guessed the other two major galaxies in the image are two of the three other parts of the UGC 10586 system. The bright spiral east of Arp 103 is UGC 10586 Notes 2, better known as NGC 6241, an Sbc spiral with lots of bright knots in its arms. They are more white than blue. Still, it looks like an active galaxy. Its redshift distance puts it at about 410 million light-years. The difference is likely just due to orbital motion about the groups center of gravity and really at about the same distance as Arp 103. NGC 6241 was discovered by William Herschel on April 29, 1788 but isn\'t in either of the Herschel 400 observing programs.

UGC 10586 is the remaining face on spiral further east than NGC 6241. Why do all of these appear to be face on? The note at NED for this galaxy belongs with Arp 103, not this galaxy. UGC 10586 is a face on Sb spiral that has a rather faint arm compared to the others. Apparently, that wasn\'t odd enough to make Arp\'s catalog. Sure seems unusual to me. It has a redshift distance of 424 million light-years, same as Arp 103.

So where is UGC 10586 Notes 1? It is the small blue galaxy just beyond the northeast edge of UGC 10586 near a bright yellow-white star. It seems rather distorted with both a blue and white region with an arm jutting out the south side. I can\'t find any distance or classification on this one. The red galaxy to the southwest of UGC 10586 is 2MASX J16504319+4523545, again not much on it. Why it too isn\'t listed as part of the UGC 10586 system I don\'t know.

Unfortunately, this paucity of information pertains to the rest of the image. Even though the SDSS lists nearly 3000 galaxies in this field only 5 of the 6 members of the UGC 10586 system have any redshift data at the time this was written. 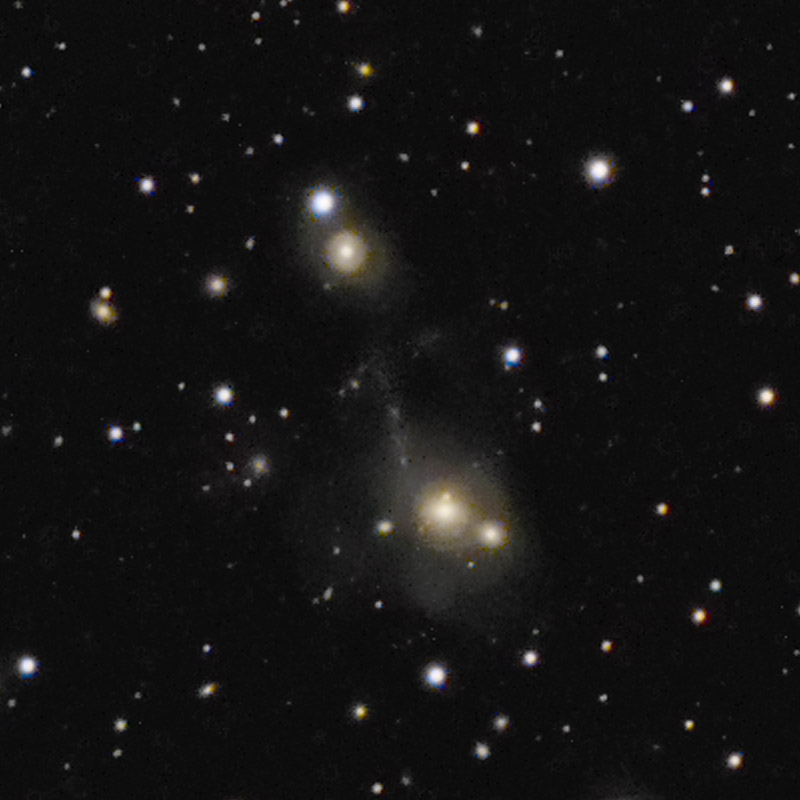 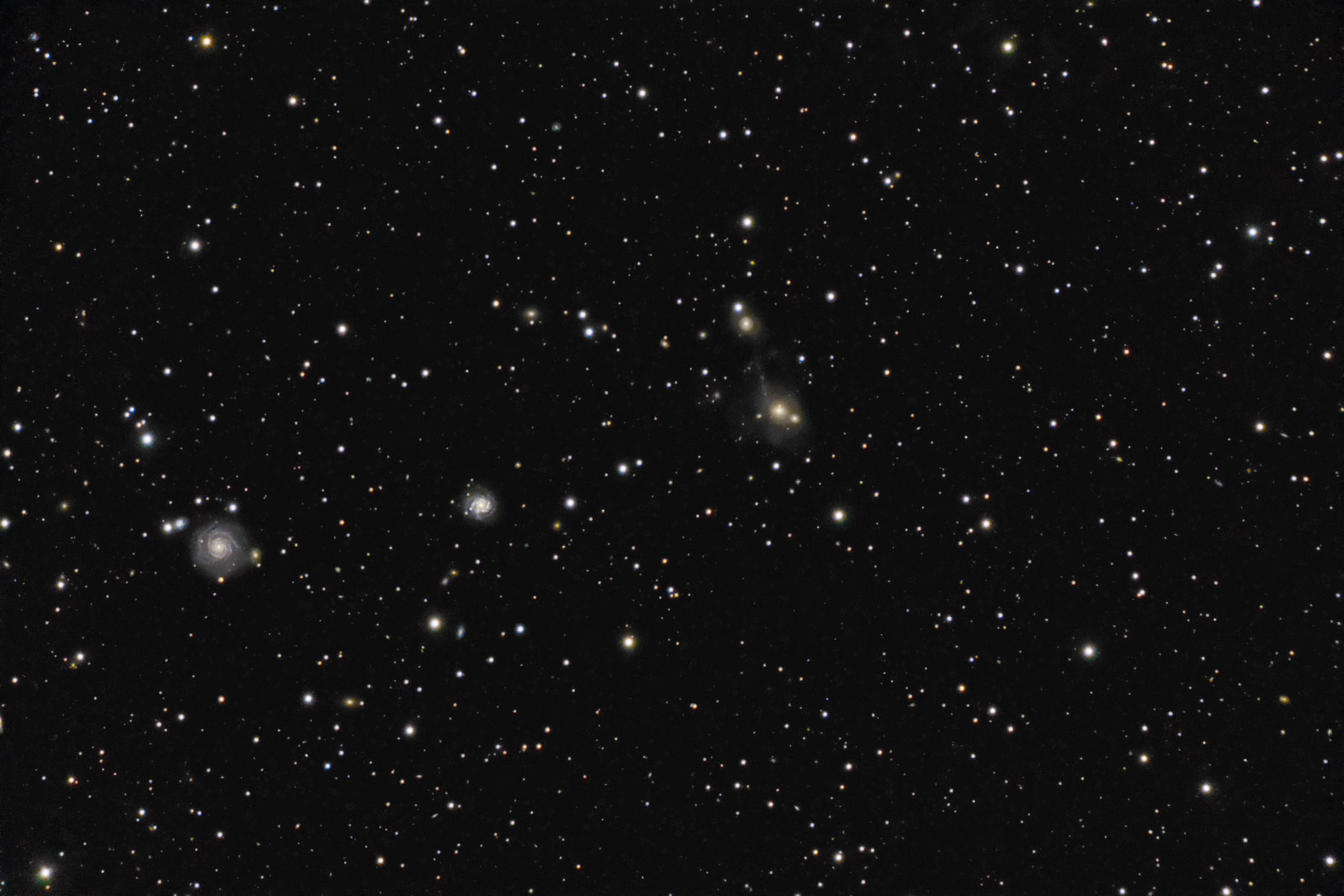