This one turned out to be a complicated region. I\'d never heard of Ambarzumian\'s Knot before and when I did I assumed it to be the puffy cloud at the end of the tidal plume or jet or whatever that feature is. Wrong! That is VV247f, one of several brightenings in the tidal feature, of which little seems to be found in the literature. Arp 105 is sometimes called \"The Guitar\". I find two spellings of the knot\'s name in the literature. I don\'t know which is more correct.

In any case, Arp 105 consists of 3 galaxies; there are two more involved though one is invisible to any image I could find and the other barely seen in my image. Arp originally only saw the three obvious ones. The upper one is NGC 3561A. It appears to be a very disturbed spiral. It is classed as either SA(r)a pec or S0^0? pec. The major plumes seem to come from it. Below it is the large elliptical NGC 3561. It too is classed as either SA(r)a pec or S0^0^: pec and is a LINER or Sy3 galaxy. Below it is the nearly starlike Ambarzumian\'s Knot. It is very blue compared to the other two. Zwicky later found two more galaxies that are within the halo of NGC 3561. Both very blue as well. Ambarzumian\'s Knot and these other two are known as the Zwicky connected multiple system. All are very blue. The one closest to the core of 3561 can\'t be seen in my image and is listed as magnitude 21.5. Seeing something that faint against a bright core, even when blue would be very difficult for my seeing and image scale. The second does show thanks to its blue color. It is about halfway between the core and Ambarzumian\'s knot which is also blue. Both are said to be starlike even to the 200\" scope and were the first galaxies found by it to be indistinguishable from stars. I need to retry this on a better night at 0.5\" per pixel and see if I can pick up the other one. Likely a fool\'s errand but an interesting challenge. This complex is located below the back foot of Ursa Major right in the corner with Leo and Leo Minor. NGC 3561 was discovered by John Herschel on March 30, 1827.

Since Arp 105 is located nearly dead center in the Abell 1185 cluster the entire field is chock full of galaxies. There\'s another interacting system to the northwest of Arp 105. While there are three galaxies in one halo catalogs only refer to the middle and upper left one as a pair (NGC 3550) and ignore the fainter one to the southwest. The SDSS lists the southwestern galaxy but gives no redshift. Dr. Corwin says on his NGC project page that its redshift is about the same as the other two, 11,000km/s rather than about 10,400 km/s for the other two. But doesn\'t offer an opinion whether it is tidally involved with the other two.

There\'s a quasar in the image quite near Arp 105 that\'s 10.7 billion light-years from us. Since Arp considers many quasars to be nearby objects ejected from active galaxies, rather than enormous active black holes in very distant galaxies as is the standard view I would imagine this quasar would fit his ideas quite well even though it is most likely just a coincidence.

There are a bunch of very distant galaxies in the northeastern (upper left) part of the image. These appear to be part of the galaxy cluster ZwCl 1109.5+2906 about 11 minutes in diameter containing some 77 galaxies. No distance estimate but it obviously lies far beyond Abell 1185.

I\'ve made an annotated image of the cluster. Members with a redshift that is in the 400-475 million light year range of the cluster, and Arp 105 are identified without any distance data given. A few beyond the cluster are noted only with their distance in billions of light-years when the only catalog entry is one that just gives its coordinates. Some that could be members but have no redshift data are identified by name followed by a question mark. The two quasars are noted by name. Labels are to the right of the object when possible. If not possible a line points to the object. The various pieces of Arp 105 that are named are shown. NGC 3558 is off the bottom of the screen except for the very northern part of its halo. I didn\'t realize it was there or I\'d have moved Arp 105 up a bit so NGC 3558 would be fully in the frame. NGC 3552 AND NGC 3553 seem reversed from normal Right Ascension order. Dr. Corwin, however, believes this fits Herschel\'s records. You can read more about this issue at the NGC Project http://www.ngcicproject.org/dss/dss_n3500.asp click on NGC 3553 for the info. Click on 3552 for more on the Abell cluster in general. Click on NGC 3561 for more on Arp 105.

On the left side of the image, a red question mark leads to a galaxy I couldn\'t find in the SDSS or any other catalog but nearby is SDSS J111206.71+284754.2 a 21.7 magnitude near star-like galaxy. So how can the SDSS pick up this faint one but not the far larger, brighter one? There\'s no redshift data on SDSS J111206.71+284754.2. I found a couple other galaxies, not in any catalog. They too are marked with a red question mark. Likely there are others but these are the brightest of the \"outcast\" galaxies.

I\'ve marked the center of another listed cluster of galaxies. NED shows it to be 11 minutes in diameter. That would extend off the north and east sides of my image. No details are provided other than it is \"medium compact\" and has 77 members.

I should mention that with the passing of Geoffrey Burbidge a few days ago (Edit: This was written in late January 2010.), Arp lost another who believed in the non-cosmological nature of quasar redshifts. That is, they don\'t indicate distance as far as Burbidge and Arp are concerned. His reasoning was different than Arp\'s and didn\'t require new physics but did require some stretching of credulity in my opinion. That only leaves his wife Margaret Burbidge and Chip Arp as major names supporting non-cosmological redshift. How they do this in the face of such overwhelming evidence to the contrary boggles my mind. Edit: Arp has since died but Margaret is still alive as this is written on November 26, 2017 at age 98.

California, France, Hawaii Telescope image of this field. A 3.6 meter telescope, 100 times the light gathering power of my system.
https://apod.nasa.gov/apod/ap051122.html 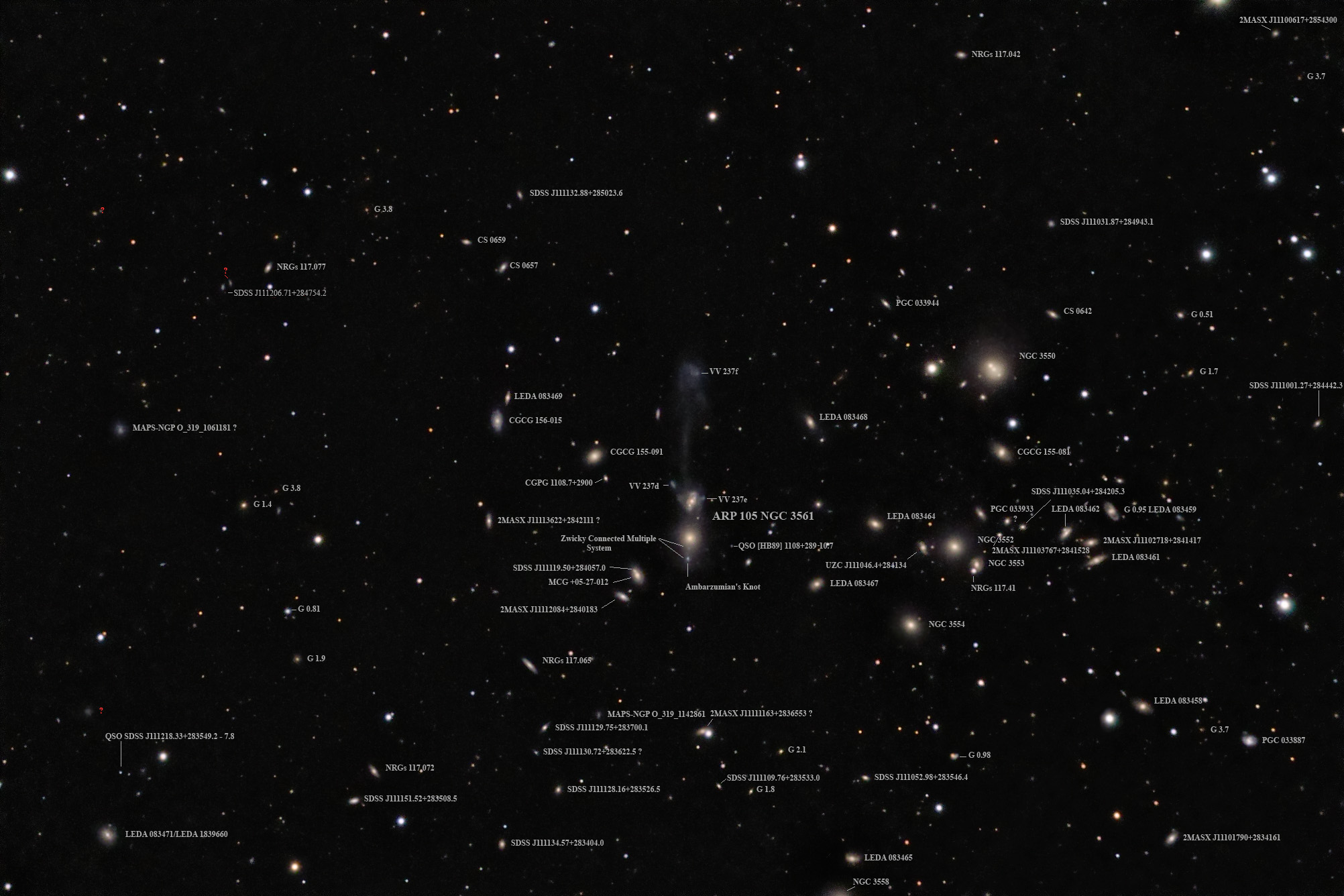 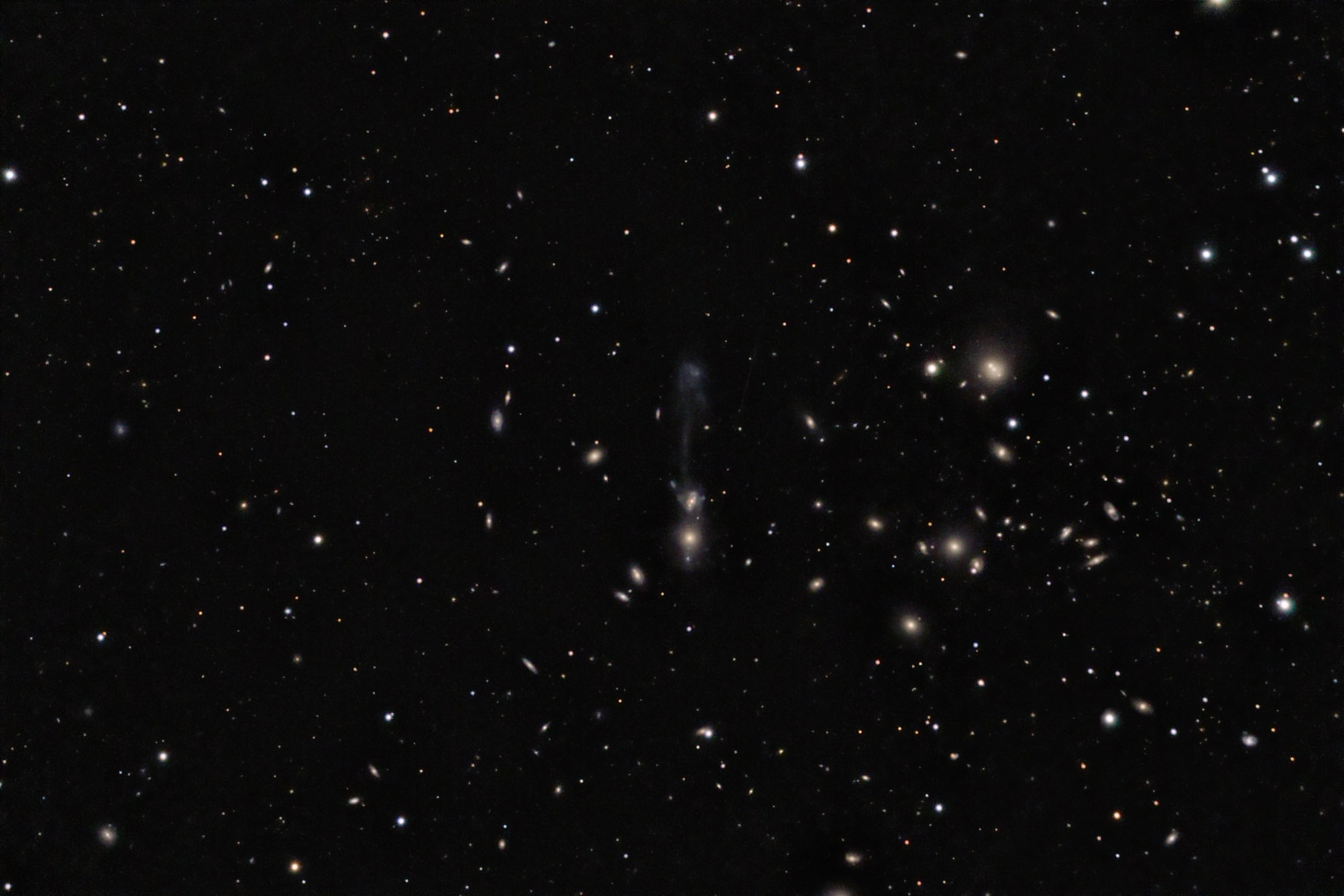