Arp 107 is a pair of colliding galaxies also known as UGC 05984. Arp classed them under \"Elliptical or Elliptical like galaxy: Connected to a spiral.\" That would certainly be what you see in my image. I sometimes wonder about his classifications but this one is quite accurate. He described it saying \"...double arm leads to E(astern) galaxy, diffuse material out either side of E(lliptical) galaxy.\" Other than there being some out the top of the elliptical as well (not seen well in his too short exposure with the 200\" telescope) his descriptions seem fairly accurate.

This galaxy was the subject of a rather \"famous\" photo on the net taken in infrared light by the orbiting Spitzer telescope. They used two wavelengths, one that they colored blue shows old stars much better than new ones and one was taken in a wavelength that shows young hot stars much more strongly than older cool ones. They colored these red. Here\'s the image:
http://www.etsu.edu/physics/bsmith/arp107/arp107_press.html

Not being in orbit and not having a supply of liquid helium (needed for earth based IR work as well as most space based IR work) I have to use visible light. But as I\'ve mentioned many times before, regions of young stars often show up very blue while regions of old stars show up red. This isn\'t as accurate method as Spitzer used but close. Compare the blue regions in my photo to the red ones in Spitzer\'s and my yellowish red regions to Spitzer\'s blue and you\'ll see they agree rather closely.

This pair is located about 463 million light-years away in the constellation of Leo Minor. Most folks realize there\'s a big and small bear in the sky, many know of the big and small dogs but for some reason, I find few know of the small lion. Maybe it\'s because the big one is just Leo rather than Leo Major, unlike the other two animals.

Most of the other galaxies of any size (and not red) in my image are at about the same distance as Arp 107. Oddly, NED shows a distance to Arp 107 of the 460 million light years I mentioned but shows the individual galaxies at about 480 million light years. I don\'t understand the difference. It classes the obvious elliptical as just that, elliptical and the spiral as an Sc spiral of the Seyfert 2 class meaning it has an active nucleus. This is common in interacting galaxies as the interaction throws material into the black hole at the galaxy\'s center causing it to be quite active.

There\'s a quasar at 7.7 billion light years and several galaxies ranging out to over 3 billion light years that I could find redshift data on and likely some of the fainter ones are even farther away. There is a Zwicky galaxy cluster with some 130 members centered just off the lower right corner but its 35 minutes across so many of the galaxies in the lower left region are likely members. NED gives no distance for this cluster though another with only 22 members centered only about 3 minutes of arc away shows a distance of 1.55 billion light years and must be part of the Zwicky cluster. 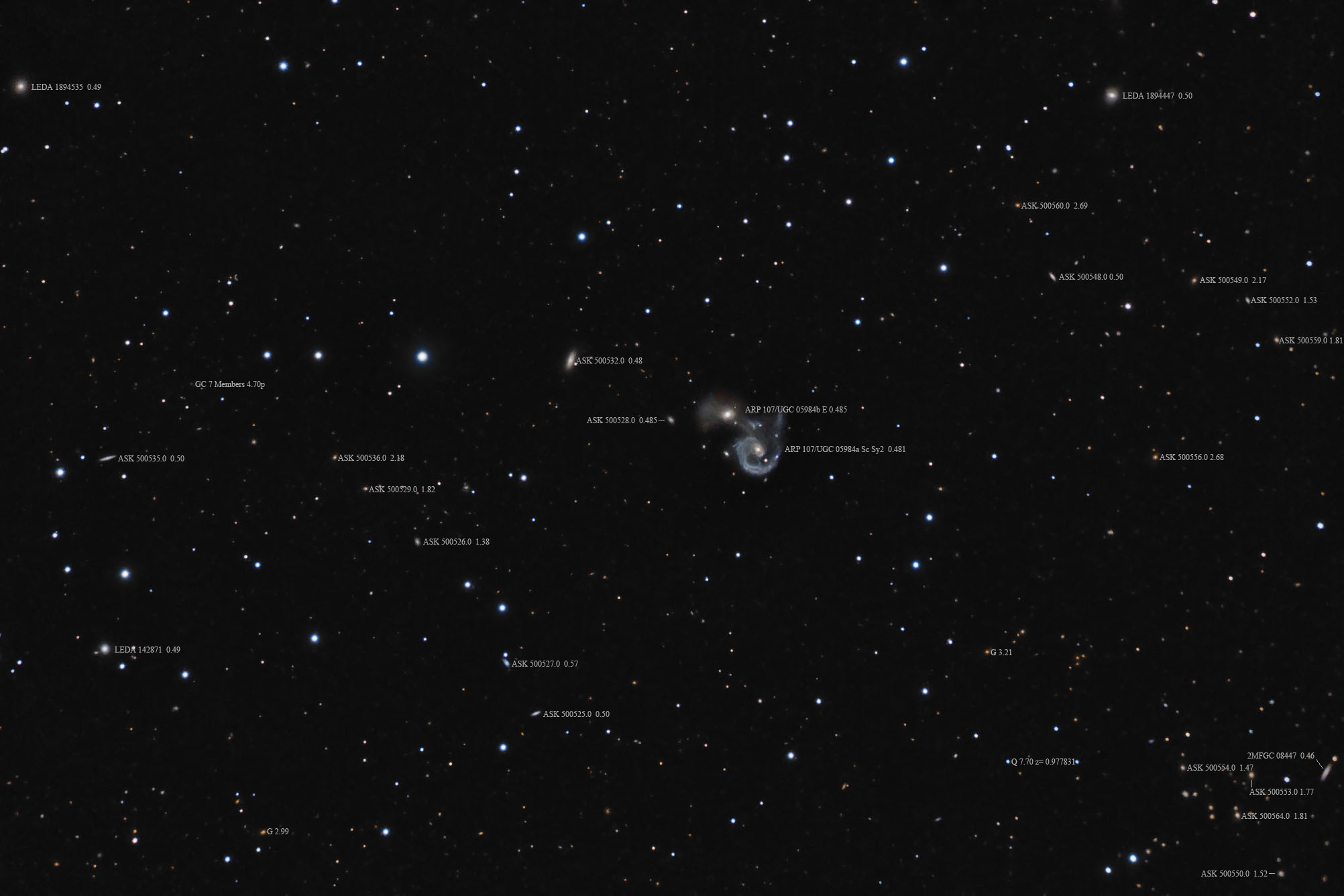 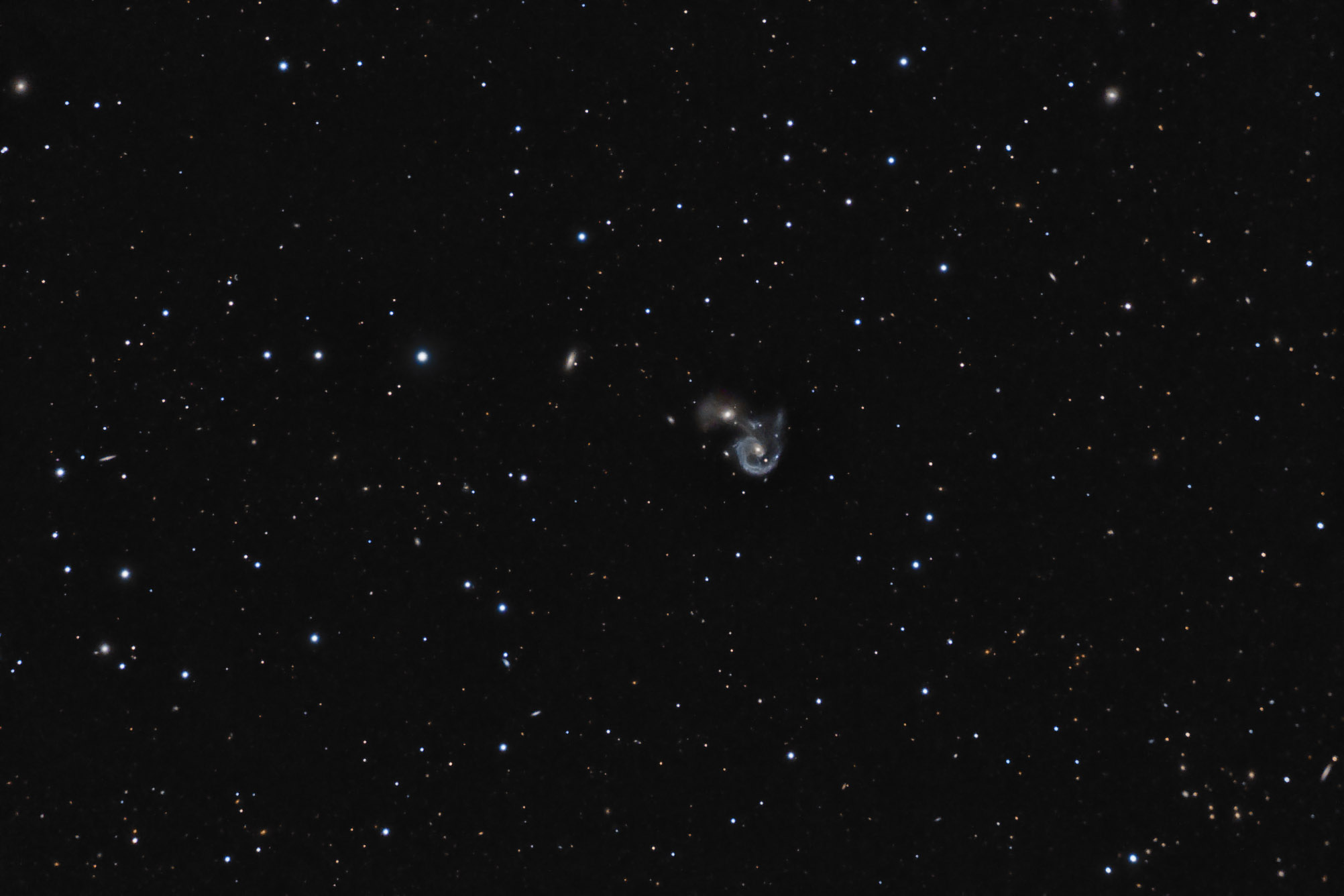 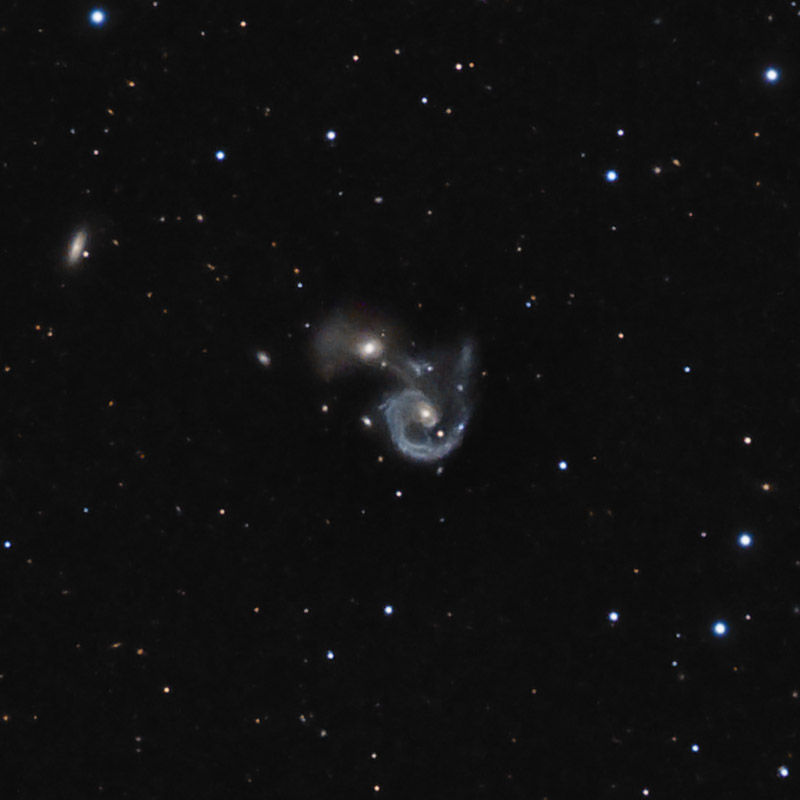