Arp 111/NGC 5421 is a pair or trio of galaxies in eastern Canes Venatici about 360 million light-years away. Arp put it in his category of elliptical or elliptical-like galaxies repelling spiral arm of a companion spiral. Since gravity can\'t repel (or at least we have no evidence it can be a repelling force) I don\'t understand what Arp means. Apparently, this is meant to describe what appears to be happening rather than be what is really happening. In the time of Arp\'s atlas that was about all we could do. The arm of the spiral does seem to bend away from the elliptical like galaxy. Arp\'s comment \"E galaxy apparently bending arm at root.\" This is likely just a descriptive comment. I hope he didn\'t think it was pushing the arm back, just positioned to look like that was happening. Though years later his strange physics allowed for some odd things but don\'t think that was one of them.

This is quite a confusing area with so many cross-linked names trying to sort it all out is a nightmare. The main galaxies, the odd spiral and the elliptical like galaxy are known collectively as NGC 5421. The little blue galaxy is apparently made up of two galaxies but is collectively known as MGC+6-31-46. All of these are collectively known as VV 120. NED refers to the two parts of MGC+6-31-46 as Arp 111 NED 02/VV 120e and Arp 111 NED 03/VV 120d. To me, VV 120d is just a blue star cloud in the galaxy. The big spiral is Arp 111 NED 01/NGC 5421 NED01 and the elliptical like galaxy Arp 111 NED 04/NGC 5421 NED 02. Now that I have you totally confused (me too) I think I have it straight on the annotated image. Not all have redshift distances but I\'ve included those when available. Then when you just about think you have it figured out you wonder; \"What happened to VV 120b?\" It is just a part of the turned back spiral arm. Why it gets its own designation is one of the mysteries of the universe.

With similar redshifts, all appear to be related. What caused the turned back arm? Wish I knew. Actually, it isn\'t all that \"turned back\" Just that it ends in a huge plume that goes in a different direction than the arm. The two arms, ignoring the plume are pretty much in agreement though the plume has stripped most of the stars from its arm. Probably due to an interaction with the elliptical like galaxy.

NED classes the spiral as Sc, NGC Project says SB? and Seligman says SBbc? So they can\'t even agree if it is a barred spiral or ordinary spiral. NGC 5421 was discovered by Édouard Stephan on June 9, 1880. 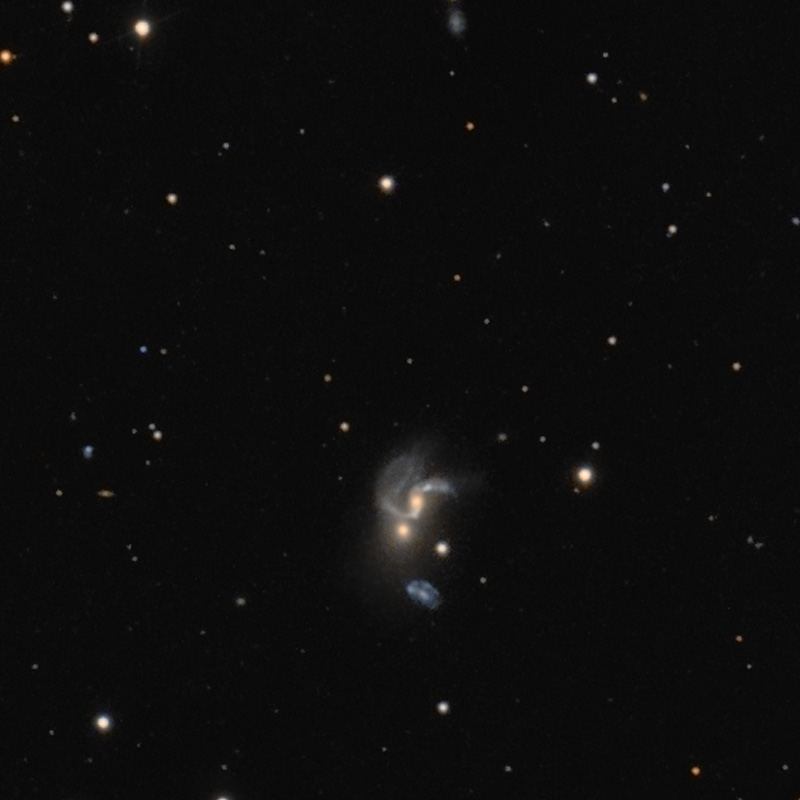 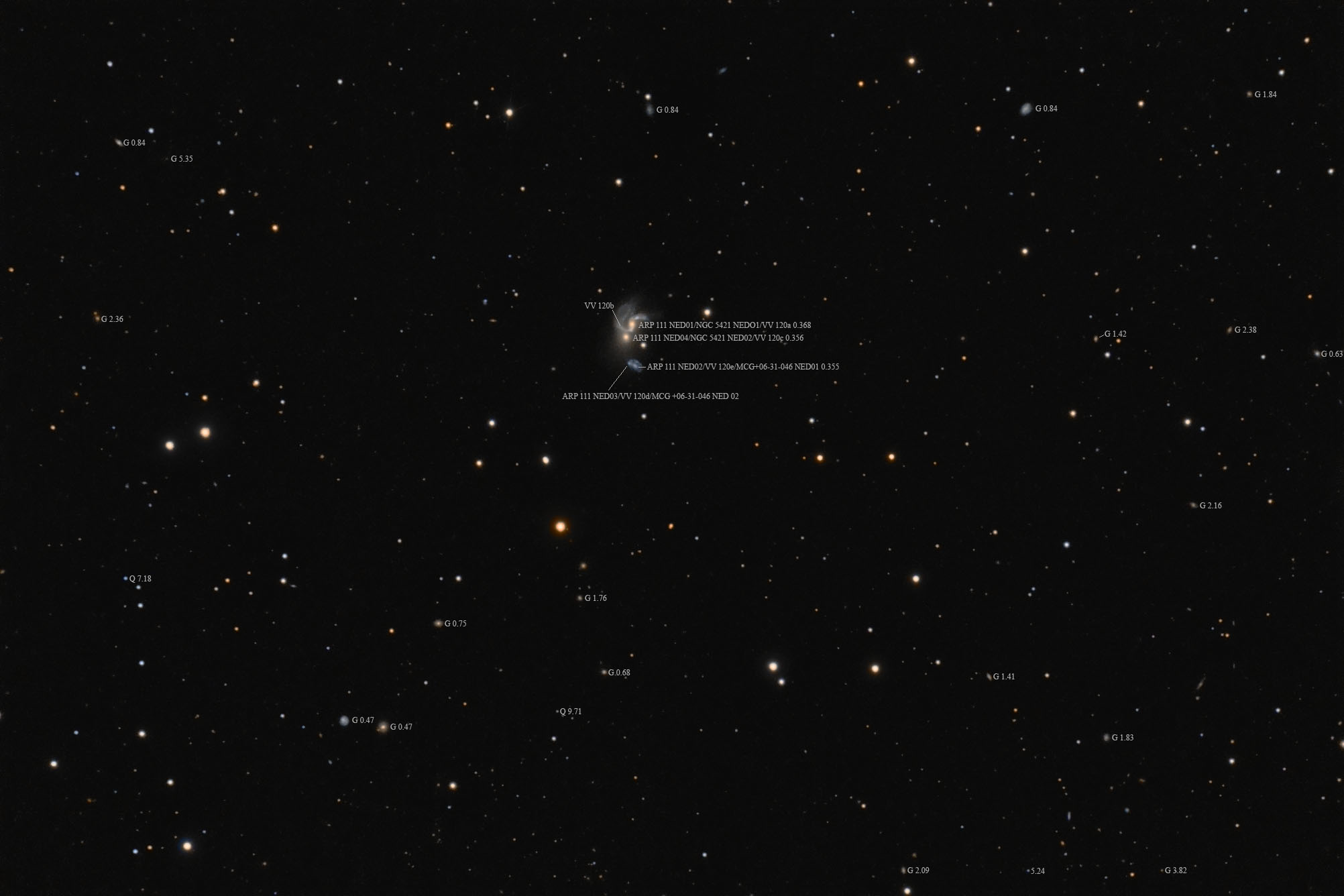 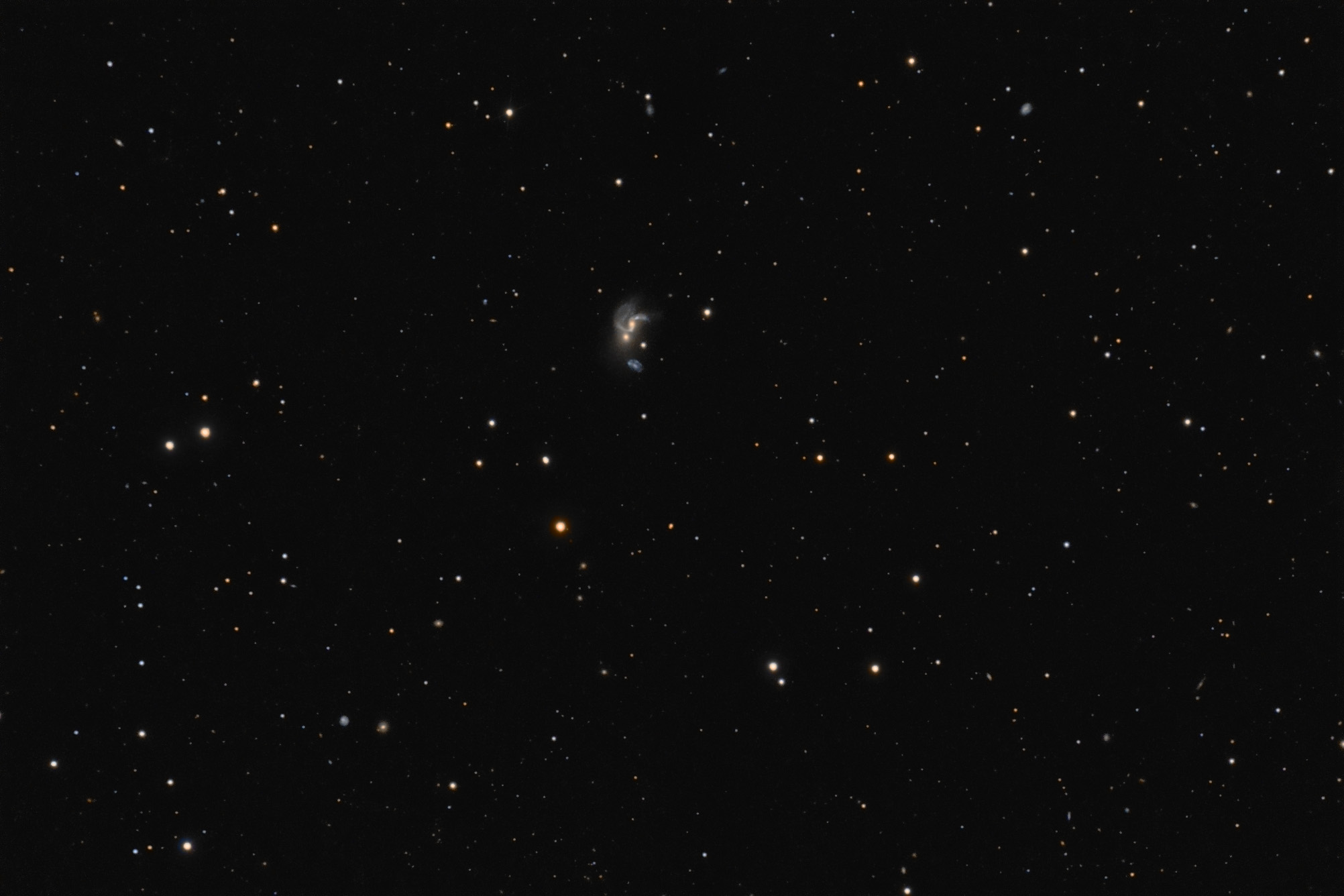