Arp 121 is a pair of interacting galaxies in Cetus. Redshift data indicates rather rapid orbital motion which makes a distance estimate a bit fuzzy. I\'ll just say it is likely between 235 and 250 million light-years distant. The western galaxy is MCG -01-03-051, a Sa pec galaxy. The eastern one is MCG -01-03-052. I find no classification. Looks like an elliptical to me. It appears MCG -01-03-051 has had the worst of the encounter. There\'s a faint spray of stars between the two. I\'m not sure to which galaxy they belong, most likely MCG -01-03-051. Arp classed it under Elliptical and elliptical-like galaxies: close to and perturbing spirals. His comment seems to just reiterate this; \"Elliptical galaxy warping spiral.\" He is letting his images do the speaking it appears. There is a puff of something off the north end of MCG -01-03-051. I can\'t tell for sure if it is part of the galaxy or a different one. If a different one it isn\'t in any catalog that I found. This pair also would seem to fit under Arp\'s \"Wind Effects\" category as well.

The field is out of the SDSS area so again, I have little on this one or the field. Most galaxies in the field are found only in the anonymous Automated Plate Measurement United Kingdom Schmidt catalog with only position and magnitude with a hint of spectral data drawn from the differences seen in the red and blue survey plates.

I find distance data on only 4 galaxies besides the two in Arp 121. All are in the lower left corner and is a group of galaxies in which 4 have a known redshift.

The main galaxy down there is the nice spiral that looks somewhat distorted, maybe by the anonymous galaxy superimposed on its southeastern edge. It is MCG -01-03-054 Arp has a whole class of \"Spiral Galaxies with Companions on Arms\". Somehow he missed this one or decided he already had enough of that class. The tight group to its upper left is known as the MCG -01-03-054a group. PGC 3596 galaxy is also known as MCG -01-03-054a, hence the name. Its distance is listed as a bit more as MCG -01-03-054. 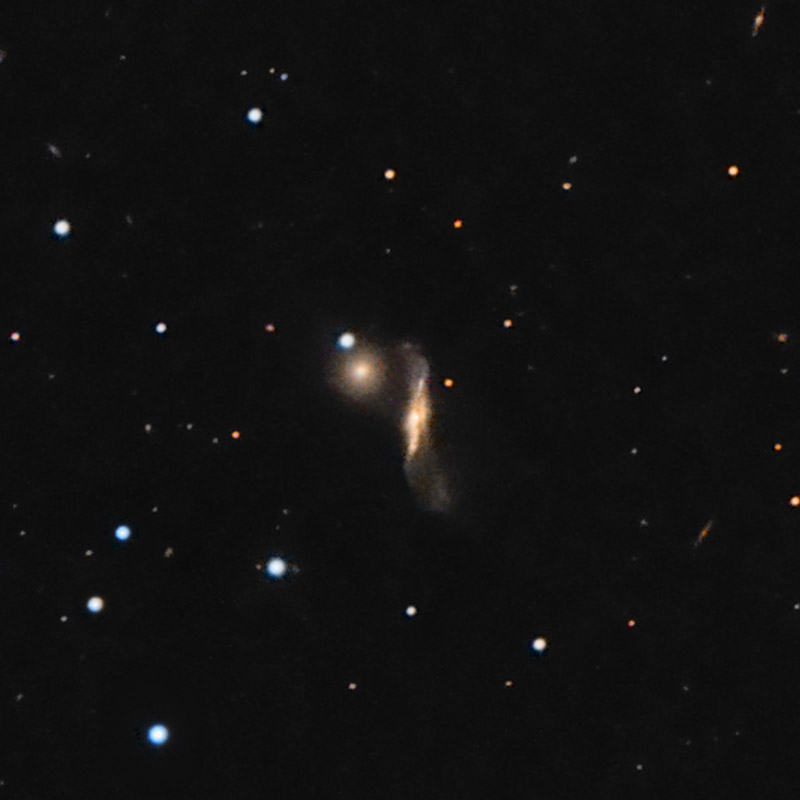 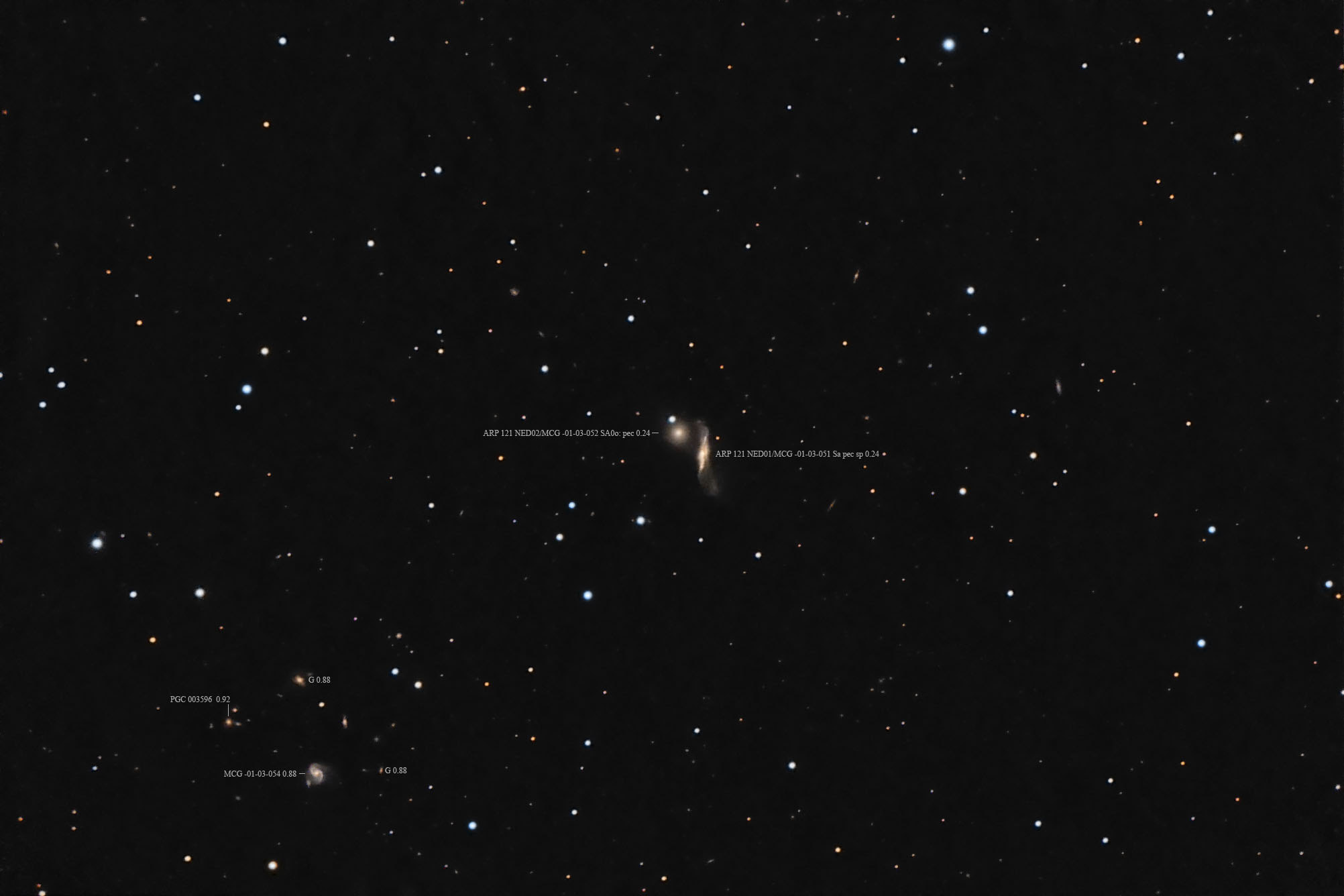 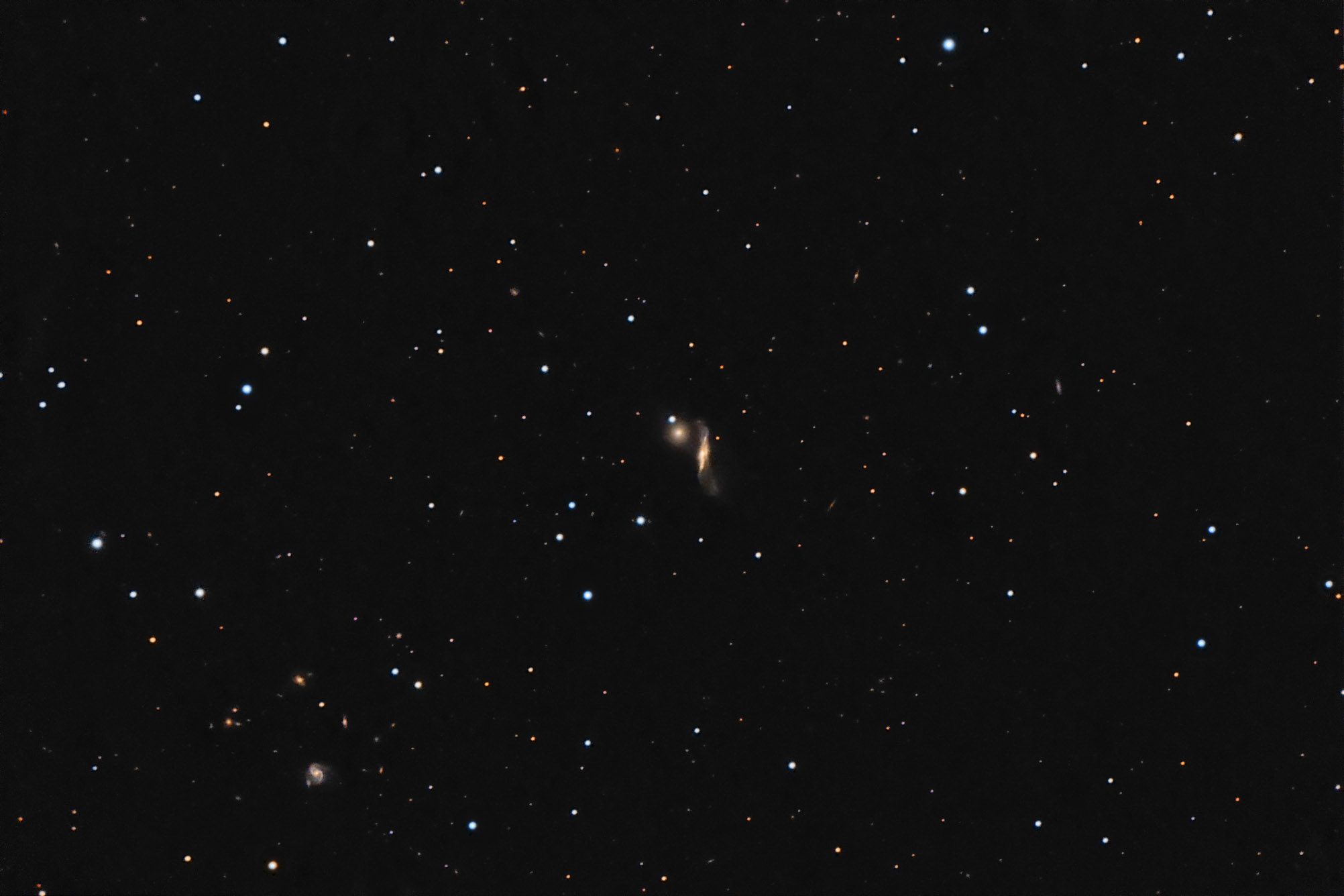