When I first imaged Arp 130 conditions were poor but I picked up what might have been a plume to the north from the northern spiral. I put it down to reshoot it. Also on my to-do list was the blue irregular galaxy IC 5377. Not realizing the two were in the same field I took IC 5377 last September. I had no idea, at the time, I was retaking Arp 130 to check on that plume. So the Tower of \"Babble\" nailed me again. I looked up what that other galaxy was and saw IC 5378 and thought that was one I\'d have expected Arp to have in his atlas. Little did I know he did and I\'d already taken it. Turns out the plume apparently wasn\'t real as it isn\'t seen in this image under better conditions. Also at the time, I did Arp 130 the Sloan DR9 images weren\'t available so I couldn\'t check there. Now that DR9 has been released I can say the plume can\'t be seen there either. Though some IFN is seen faintly in the new image to the lower right of IC 5377 and above and to the left of the asteroid 2008 VD43. I thought it a smear on my flat frame but it is real.

Turns out there\'s little information on the irregular galaxy IC 5377. It seems to have two condensations off center surrounded by a haze of blue stars. It isn\'t nearly as blue as my previous post of UGC 9128. Instead, it is rather typical of blue irregular galaxies. it appears to be rather lonely with no other galaxy for a neighbor in my image at its distance but that is only an illusion due to my limited field of view. Only a half degree away (280,000 light years minimum) is the much more famous edge on galaxy NGC 7814. Interaction with it could explain its new star formation quite easily though it could be due to other things as well. In any case, it is likely a satellite of NGC 7814. Though without any papers on it this is only my speculation. My poorly processed image of NGC 7814 from 2008 when I didn\'t have the software I do today is at: http://www.spacebanter.com/attachment.php?attachmentid=2264&d=1228166947 .

As to Arp 130, he considered the elliptical to be perturbing the spiral but if their redshift distances are right they are 20 million light-years apart and thus not at all related. Though a redshift distance difference can be due to relative velocity and not indicate true separation. Finding no other distance determination the relationship of these two, if any, can\'t be determined. It was discovered by Isaac Roberts in 1895. I can\'t find the exact date, however.

The galaxy below Arp 130 is IC 5379. While its redshift is the same as that of the southern member of Arp 130 for some reason NED now says they can\'t calculate a distance since the Hubble flow model doesn\'t apply here. I don\'t understand this comment. When I researched Arp 130 the first time NED had no such problem and said its distance was 270 million light-years in agreement with the southern member of Arp 130. Now that has changed. Hence the question mark on the annotated image. The other two IC galaxies were also found by Isaac Roberts also in 1895, likely the same night as Arp 130/IC 5378

Three asteroids are in the image. One passed right over an anonymous galaxy which makes it hard to see. It also was the faintest of the three in my data. See the annotated image for details.

No other galaxy in the image has redshift data. Only a handful are even listed in NED but with little other information available. I\'ve not included them. However, there is one galaxy group in the image which I have annotated but it has no distance so that is noted with \"na\". In this case, all 4 members were identified at NED with one trying hard to hide behind a star. 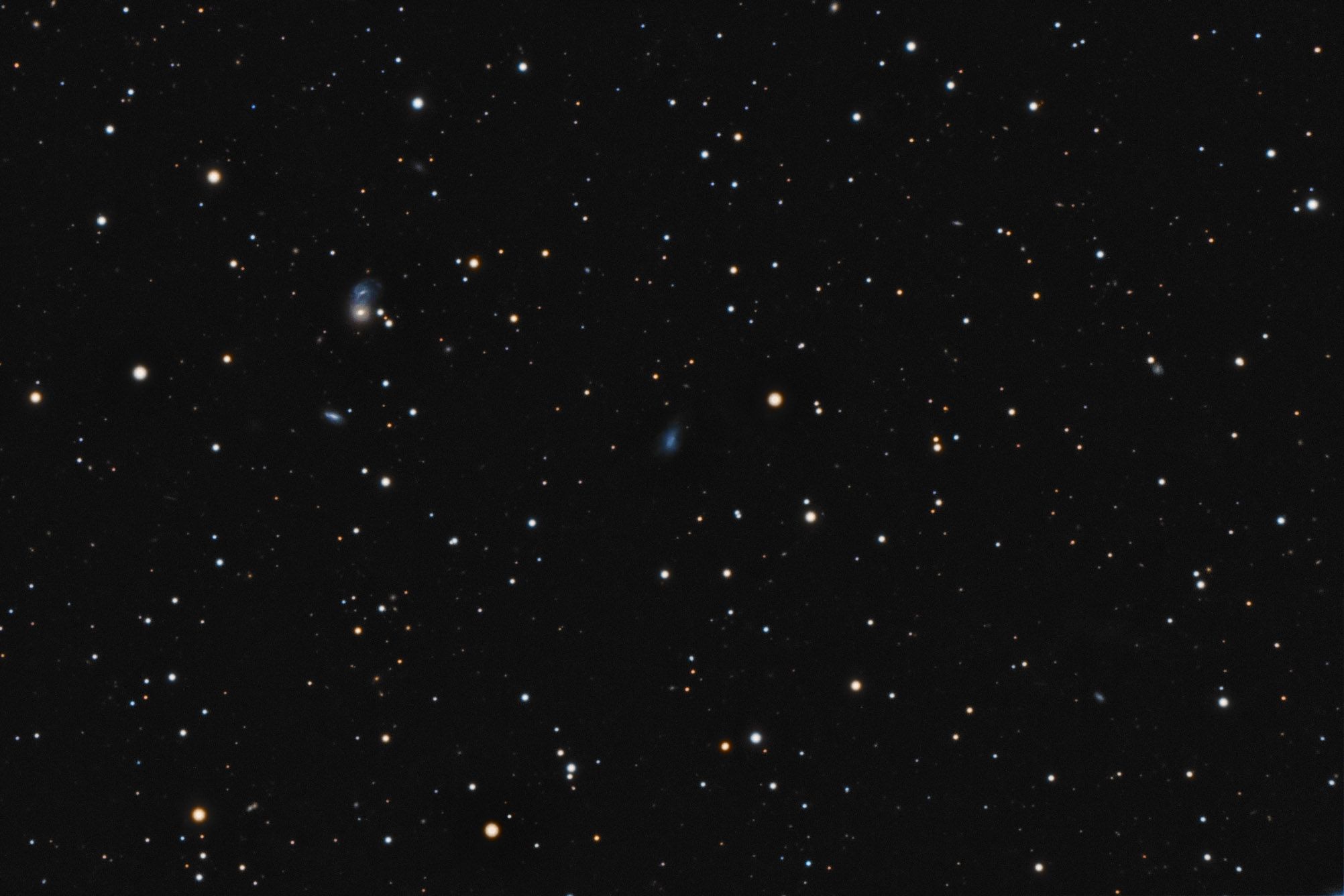 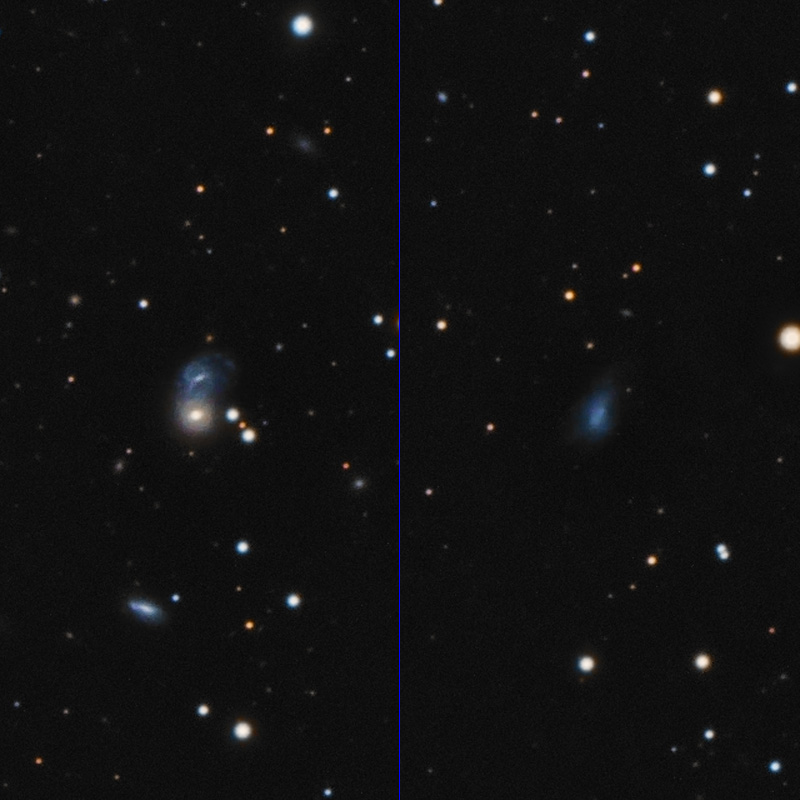 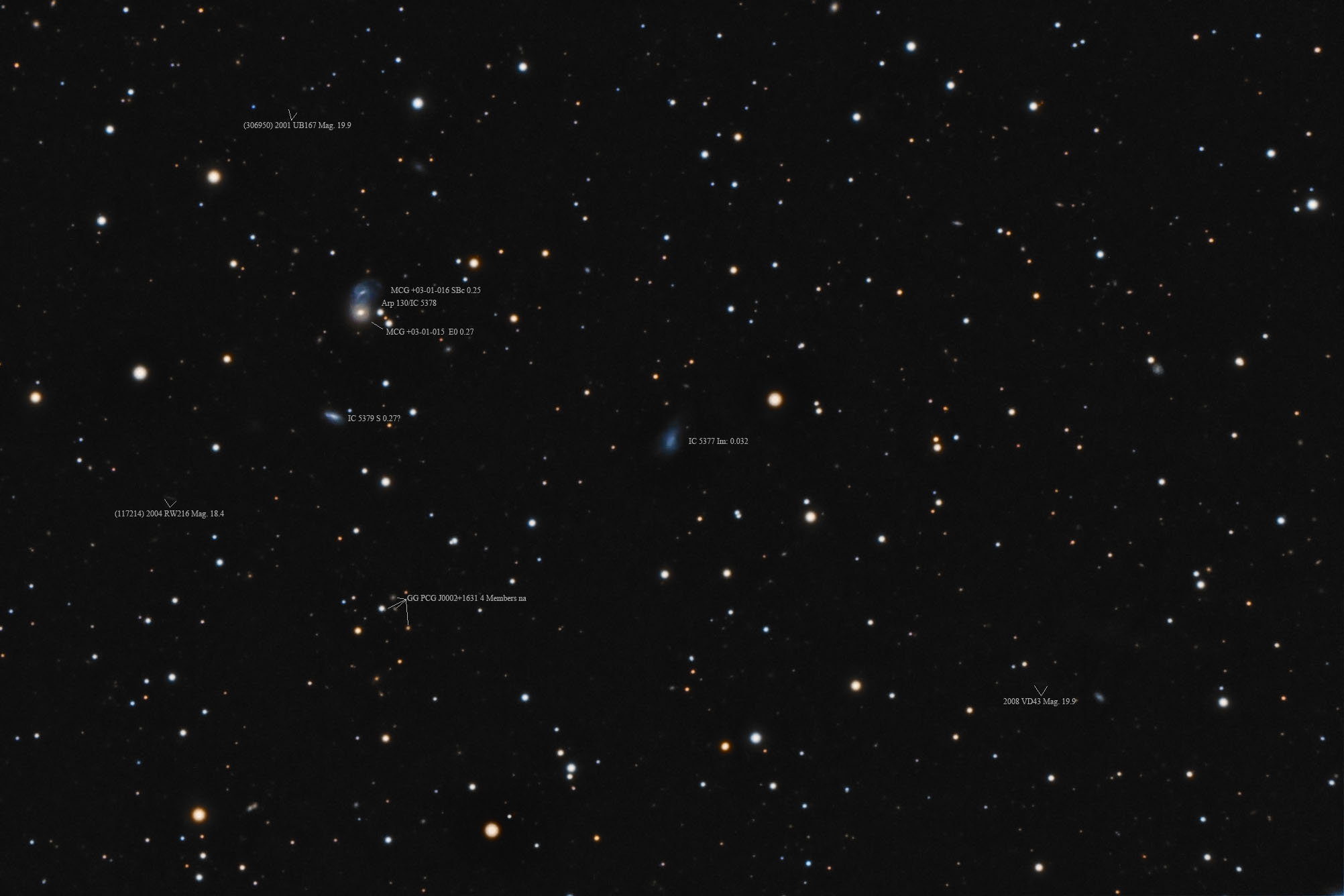