Arp 132 falls in Arp\'s category \"Elliptical close to and perturbing spirals.\" It is about 350 to 360 million light-years away in the constellation of Leo just north of Crater. It appears the western galaxy is the spiral and the eastern the elliptical that Arp refers to. Oddly NED classes both as E pec one place and the obvious spiral as Sb pec in another. It appears the E pec classification is a misprint. The redshifts of these two aren\'t quite the same indicating an 8 million light year difference. This doesn\'t mean they are really this far apart or didn\'t interact in the past. Still, I have problems with them as a real interacting pair. The elliptical, while labeled peculiar, probably for the strong core and much weaker outer areas (is this a disk seen face on or a sphere of low stellar density) it is quite even. I\'d suspect any recent interaction to have distorted it in an unsymmetrical way. There are a few other galaxies at about the same distance in the image including the far larger CGCG 011-062 to the far left of my image. None of them appear likely candidates either for interaction with the western member of Arp 132. Is an interaction even necessary as these are quite small galaxies some of which just seem naturally distorted? Another possibility I didn\'t find anyone considering is that the southern part of the spiral is really a separate galaxy with a tidal tail looking like a spiral arm so this is a merger in progress. I found virtually nothing of use for deciding this in the literature.

I was pleased to find when I checked the Hubble Legacy site that Hubble had imaged this pair. Until I brought up the image, that is. The image was of the pair of galaxies to the northwest of Arp 132, under asteroid Dodaira, one galaxy is labeled \"G 1.4\" in the annotated image. Even they were at the very edge of the field. Probably these were just random field images taken when some other instrument was actually taking data on Arp 132. This is done quite often with Hubble.

There is a galaxy group located near the upper left corner of my image that has an average distance of 360 million light-years with 22 members. No diameter is given. It\'s possible Arp 132 is a member of this group as are most of the other galaxies at about this distance in the image. Its core is marked by its name, MZ 04712. The spiral galaxy to the left and a bit above center is PGC 034689, anSA(s)c about 370 million light-years distant. This is the same as Arp 132. They are likely related.

This field is out of the Sloan survey field yet there\'s a lot of information on the other galaxies in the image so the annotated image is rather well covered with redshift distances for a change.

Arp 132 is in the same field as the LCLG -03 080 galaxy group which consists of 9 members at about 1.5 billion light-years. Those I could identify as part of the 9 members are noted by G L followed by their redshift distance. LCLG stands for Las Campanas Loose Groups in case you were wondering. The center of the group is marked by its name. Oddly there are quite a few other galaxies at about 1.5 billion light years that are not in the group. Some of these, but not all, are in the Las Campanas Red Shift catalog. So why aren\'t they in the group? I have no idea but if I include them as part of the group the count goes well over 9. My head hurts.

The image contains two asteroids; (14313) Dodaira at an estimated magnitude of 18.2 and (107981) 2001 FY130 at an estimated magnitude of 19.5. The naming citation of Dodaira reads:
\"Dodaira station was dedicated in 1962 with a 0.91-m reflector and 0.50-m Schmidt telescope as a branch station of the Tokyo Astronomical Observatory in Saitama prefecture, and its operation was terminated in Mar. 2000. It was located where the borders of Tokugawa, Ogawamachi and Higashichichibu meet.\"

So what happened to those nice telescopes? If they are no longer using them I\'d be willing to take the 0.91-meter scope off their hands. 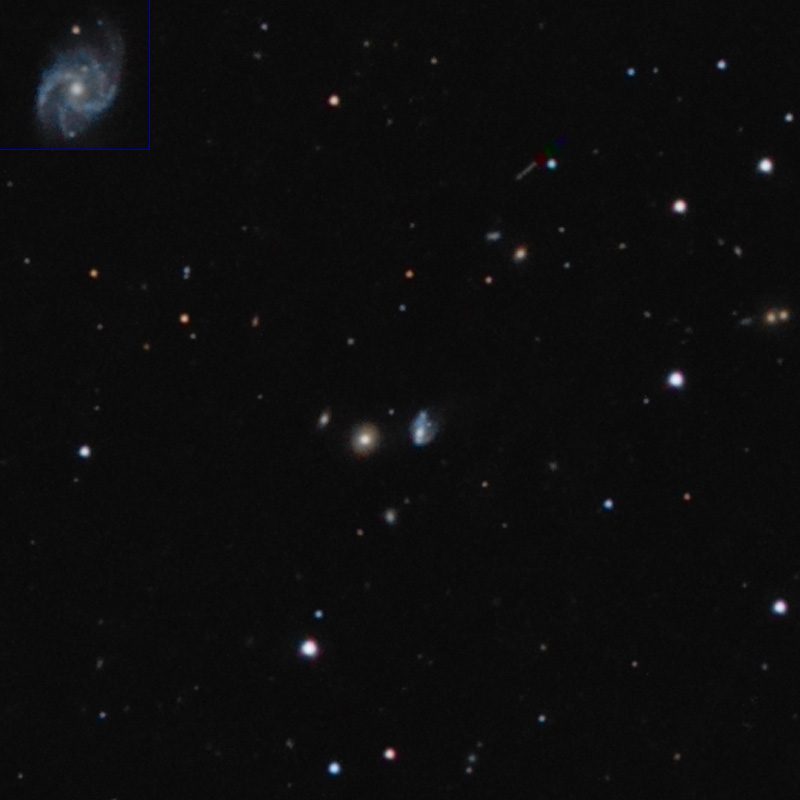 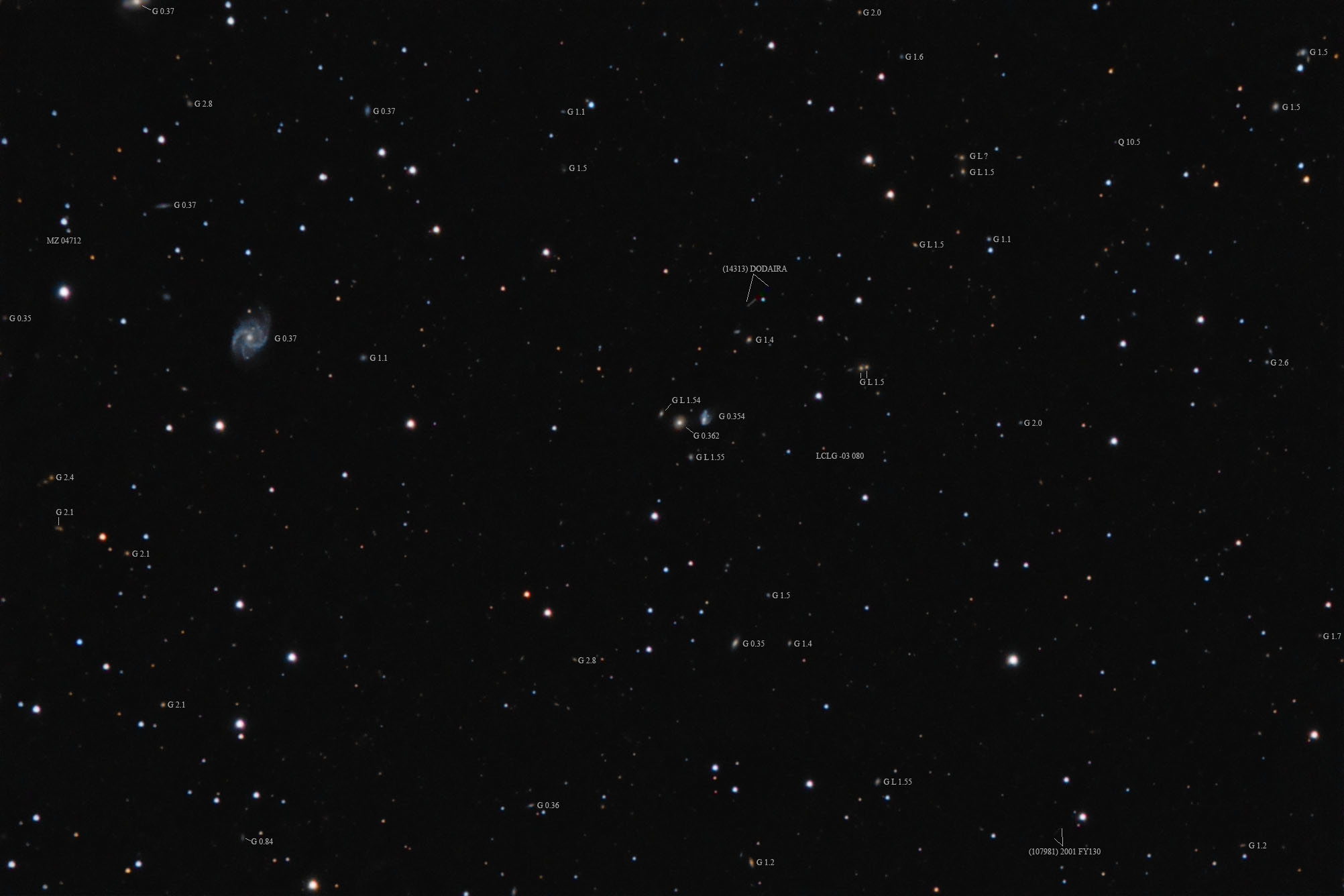 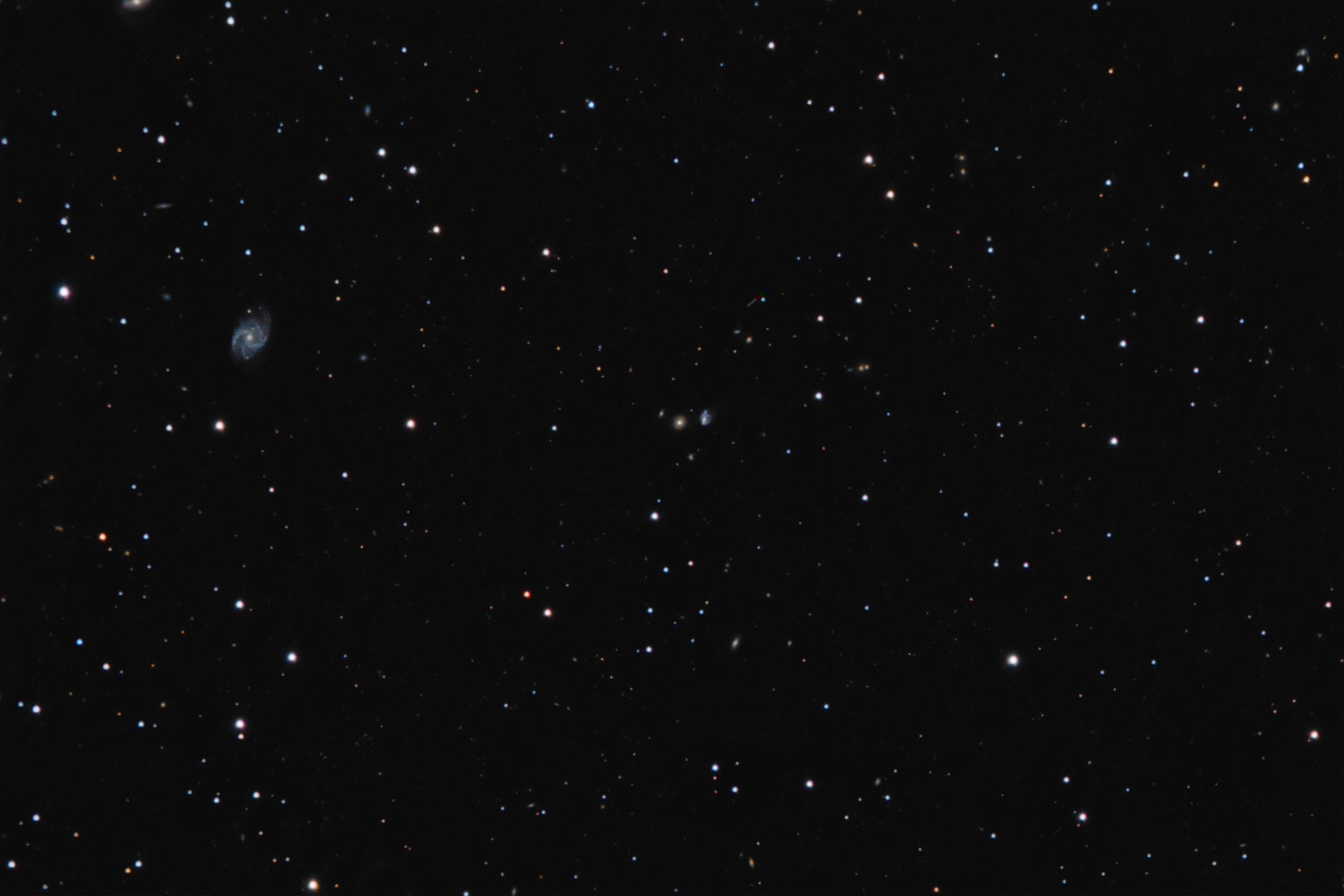