Arp 135, NGC 1023 is also the namesake of a galaxy group -- the NGC 1023 group of course. It is close by at only about 20 million light years by redshift and 35 million light-years by Tully fisher measurements. So it is right in our backyard! The galaxy is 45 to 75 million light-years across depending one which distance estimate is used.

Arp classed this one under \"Elliptical or Elliptical Like Galaxies with Nearby Fragments\". Arp 135 would be \"elliptical like\" as it is actually an SB0 galaxy. SB for barred spiral (we are looking right down the bar so it isn\'t very obvious) and the 0 means there is little to no dust and gas remaining in the galaxy -- the same as an elliptical galaxy. Without dust and gas, there can be little to no star formation so the stars are all old ones. Since blue stars are short-lived there can be few if any in a galaxy without star formation going on. This is why the galaxy is a yellowish orange color, the color of stars that have a long enough lifespan to still be around after star formation ceased. The \"fragment\" Arp refers to is NGC 1023A, the blue object at the left end of the galaxy. It is classed as a blue irregular galaxy with a question mark indicating this is not a firm classification. It has a somewhat different redshift than the part of Arp 135 \"behind\" it so likely really is a separate galaxy. I say behind as that\'s what it looks like. It may well be in front of it. In any case, it is moving away from us faster than Arp 135 so if it is in front a collision may be in the future.

It is one of the 8 galaxies in the cluster in any case. The blue color would indicate interaction with Arp 135 is likely triggering the star formation. Arp 135 appears to have lost its dust and gas at least a couple billion years ago so would have little to contribute to this object making it unlikely it is just part of Arp 135, its differing redshift would also indicate this. The other members of the group in my image are also quite blue. They are NGC 1023B (classed simply as a dwarf galaxy) further left of 1023 and almost hidden under a very bright star. The 4th member is the dwarf spiral looking galaxy NGC 1023D (also classed as a dwarf with no mention of it being a spiral) near the bottom edge of the image directly below Arp 135. Even its core appears blue, probably why it is not considered a spiral. Why these galaxies have so much star formation still possible while Arp 135 doesn\'t is not explained in any of the literature I consulted. In case you are wondering NGC 1023C is out of the frame above Arp 135, it too is classed as a dwarf. I didn\'t look up the other members since they all were out of frame. All 8 fit in an area of space of 6 million cubic light-years.

Arp\'s comment on this one reads: \"Similar nebulosity about one diameter further east.\" This apparently refers to NGC 1023B. Is he trying to say it too might be a \"fragment\" of NGC 1023? It certainly is similar to the 1023A.

NGC 1023 was discovered by William Herschel on October 18, 1786 and is in the original Herschel 400 observing program. My notes from that on September 10, 1985 with my Cave 10\" f/5 at up to 180x reads: \"Large galaxy with nearly round bright core and an even brighter (but not starlike) nucleus. It is surrounded by a faint highly oval outer halo.\" 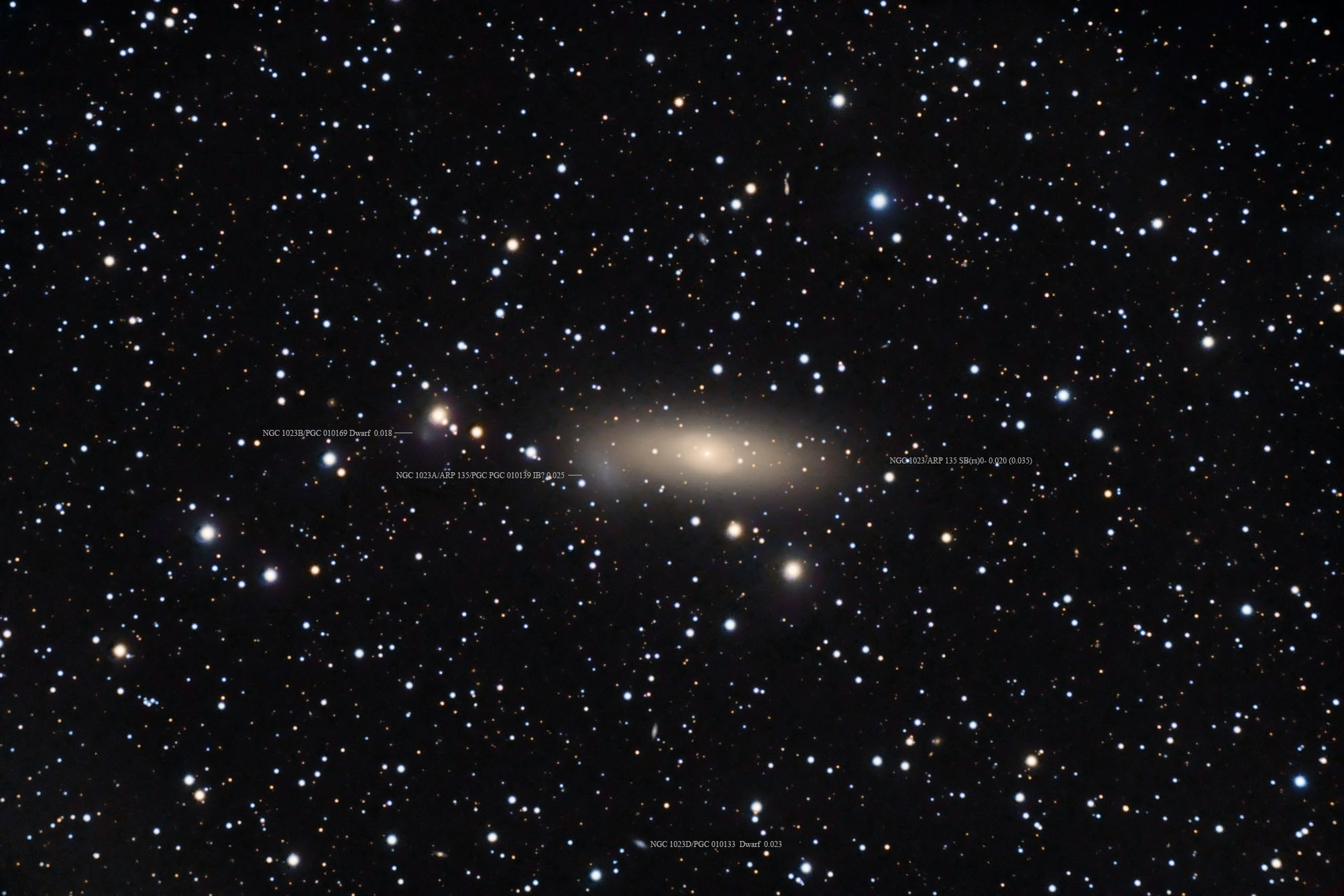