Arp 140 is a pair of interacting galaxies, NGC 274 and NGC 275 right to left. They are 65 million light years distant and in the constellation of Cetus. Arp classed them under; material emanating from elliptical galaxies. A category that makes little sense to me. M87 has a nice jet and would seem to fit but it\'s under galaxies with jets which is more accurate though its the black hole, not the galaxy itself that is the cause of the jet. Other than jets what can an elliptical, or its black hole, emanate? All galaxies I\'ve imaged so far in this category involve highly distorted galaxies, #142 through #145. All appear to be due to interacting galaxies. Arp 140 appears to fall into this pattern. Or does it? In the other cases, both the elliptical and the spiral are distorted. Usually, the spiral is considerably more distorted which isn\'t surprising. But both show distortion. Not in this case. Here the elliptical, NGC 274, really an S0 galaxy not elliptical, seems little distorted though it is classed a being peculiar. But its companion, at the same redshift distance, NGC 275 is highly distorted and generating new stars like crazy. This seems hard to explain. It\'s likely they are much farther apart than their nearly equal redshift indicates with probably the distorted spiral being closer to us. I say this because its blue color overlays some of the golden S0 galaxy. The S0\'s higher density may be helping keep it from distorting very much. While some theories say an S0 is the result of a galaxy merger it appears NGC 274 was already S0 long before this encounter. That doesn\'t mean it didn\'t have a previous one billions of years earlier that created it. But now look really closely at the enlargement. There does appear to be a very faint linear feature coming from the S0 pointed to the east-northeast. There seems to be a faint tidal spray around the galaxy as well. So maybe Arp was right after all though I see no hint of the feature in Arp\'s image. I need to take a much deeper image though that is likely impossible due to satellite traffic. This pair is right in the geostationary belt as seen from my latitude.

NGC 275 does appear highly disturbed by the encounter. It is classed as SB(rs)cd pec. Peculiar it certainly is! Its spiral structure is hardly recognizable. The core is almost gone but does have a typical orange color. The galaxy is dominated by its many massive star-forming HII regions.

Due to all the geostationary satellites that were seen in this image, I had to do some fancy processing, well fancy for me, to eliminate them from hiding the galaxies. Many of the trails were atop other trails making it unlikely that even if I had enough subframes I could use any normal noise rejection combine successfully. But with only 4 frames that wasn\'t an option to even try. Fortunately, 2 frames had no bright satellites crossing the pair. The other two had a bunch. So I processed all 4 as well as just the two \"good\" ones. The latter was pretty noisy having too little time to make a good image. What I did was to process it to match the light levels of the 4 frame image but then applied stronger than normal noise reduction. I then copied just the part with the galaxies and pasted it into the full image brightening it slightly. This got rid of the satellites but left less detail in the galaxies. I then merged the two using \"Darken\" as the blend option. This prevented the satellites from showing but returned the detail to the galaxy since the galaxies were dimmer in the 4 frame image. I didn\'t do this with the full image as doing so would have wiped out the three asteroids as well as the satellites and played havoc with the brightness level of the stars. I tried it but didn\'t like the result. So I just used this for the area in and around Arp 140.

There are three asteroids in the image. The brightest is southeast of Arp 140, a bit under one-third of the way to the lower left corner. It is (80188) 1999 VC37 at an estimated magnitude of 18.1 but appears a bit dimmer to me. Almost as bright is (49774) 1999 WT9 straight south of (49774) 1999 WT9Arp 140 about halfway to the bottom. It too has an estimated magnitude of 18.1 but is fainter than the first one in my image. Fainter still is the one near the lower left corner by a slightly orange star. It is (186173) 2001 UZ155 at an estimated magnitude of 19.1. That appears about right. The transparency this night was poor limiting my ability to go faint. Asteroids are common only 8 degrees from the ecliptic as this object is.

Arp has something entering his image as well. The angle is wrong (at a right angle) for a belt asteroid so it may be a high inclination satellite trail. Most likely of Russian origin. 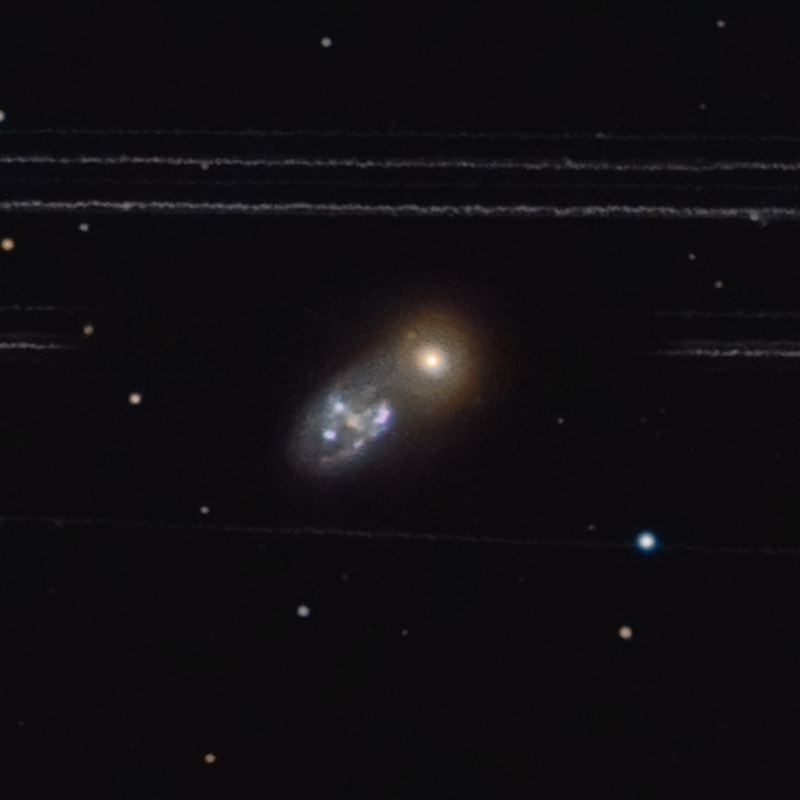 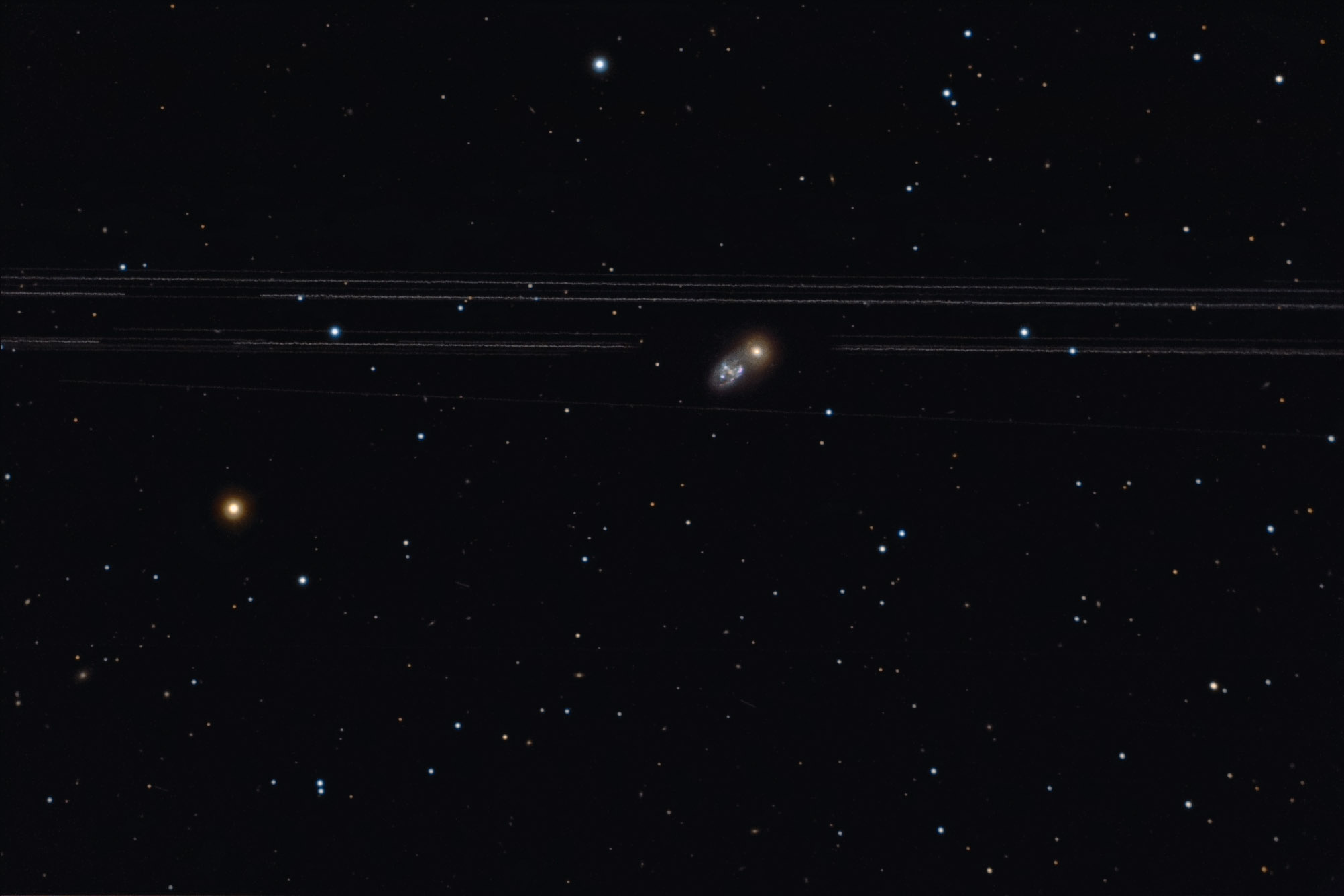 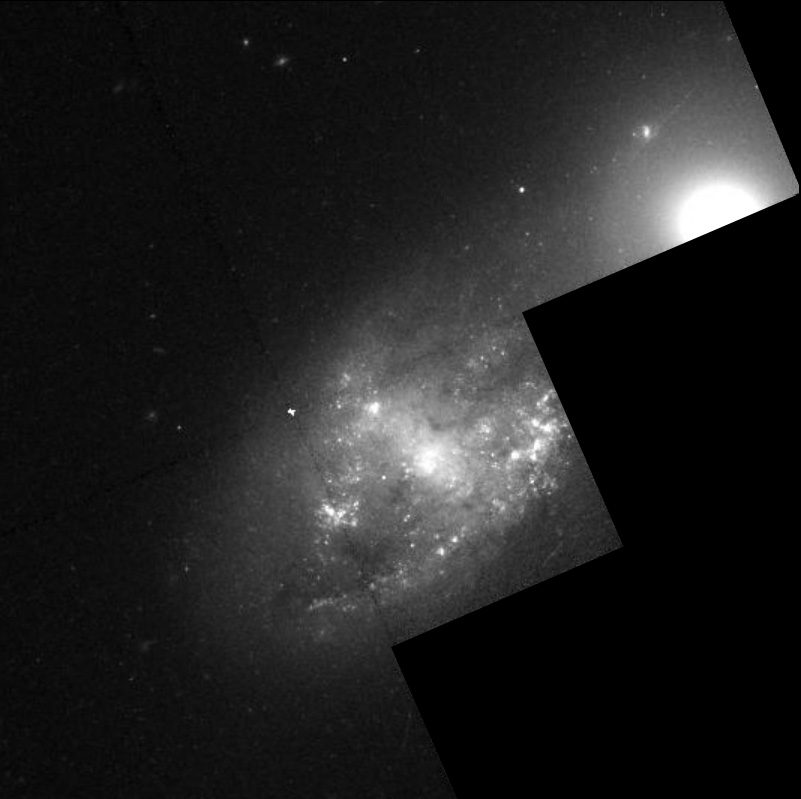