Arp 151 is a rather odd object. It appears to be a compact galaxy with a long jet (40\") that has a bright knot in the middle of it. Or maybe it is a chain of three galaxies as the Vorontso-Velyaminov Interacting Galaxy Catalog indicates saying it is VV144a, b, and c. But http://i273.photobucket.com/albums/jj229/Astronomerica/SDSS-48/NGC5820-SDSS.jpg gives the exact same coordinates for each entry! All point to the lower compact object. Arp put it in his class Galaxies (not classifiable as E or S): with jets. He said nothing about it, however. It appears in many catalogs as many different types of objects. NED says it is a Seyfert 1 galaxy. It\'s in the 2MASS survey as an infrared object. The Markarian catalog lists it as an ultraviolet excess galaxy. It is in the Second Byurakan Survey of Emission Line Objects as an emission line source. The SDSS lists it as a quasar. That one surprised me greatly. The Luyten Blue Star Catalogue lists it as a blue star! It is in several X-ray catalogs as an X-ray source and some catalogs actually consider it a galaxy. Talk about an identity crisis! A note at NED says this galaxy was the first Luyten blue \"star\" recognized to be a galaxy. I assume this refers to the blue knot in its center. NED gives its length as 29.4\" while I measure it at 53\", nearly twice as long. Why such a large difference?

Its redshift distance is about 300 million light-years. NED classes it as an S0 peculiar Seyfert 1 galaxy. If it is a quasar it must be the closest one as I can\'t recall any less than a billion light-years away, maybe nearly 2 billion. It is located in Ursa Major, about a quarter of the way from M97 to M109.

The SDSS lists the knot a bit less than halfway along the \"jet\" as a separate galaxy SDSS J112535.23+542314.3/ASK 236801.0 and not part of a galaxy. They show a redshift distance only 4 million light-years closer than Arp 151. So is it a knot or a separate galaxy? Is Arp 151 eating it for lunch and the \"jet\" a resulting tidal plume of stars possibly drawn away from the galaxy with only the core remaining to appear like a knot that by coincidence of perspective seems to lie on the \"jet\"? Looking closely there appears to be another knot at the northwestern end of the Jet. It is far fainter than the one near the middle. It carries the designation 2MFGC 08934 and is an IR source as 2MASX J11253416+5423312. What exactly constitutes the flat galaxy in the image I don\'t know. Lack of redshift data means it could be a background object. Or is it a three galaxy chain as some papers indicate? Also, I seem to see a faint hint of a \"jet\" or plume going to the southeast of the main condensation as well.

The obvious round \"bubble\" centered on a point halfway between the blue knot and the northwest end of the \"jet\" caught me by surprise. I only see hints of it in Arp\'s image. Slightly stronger hints are seen in the POSS 2 plates. I was about ready to put down to some sort of reflection from the star to the north when I saw it clearly in the SDSS image. It is real but not mentioned in the few papers I looked at on this galaxy. Is it part of the galaxy, an unknown planetary nebula seen in front of the galaxy or something else? I find nothing on it. The color is wrong for a planetary so I\'ll go with part of the galaxy for now.

This has to be one complex object that is not getting much study. Is there a fourth galaxy involved here? Just to the west of the northern end of Arp 151, and well shown in Arp\'s image is a small, 20th magnitude, galaxy, SDSS J112531.90+542321.8. With no redshift data, its distance is unknown.

My processing of this one was severely hurt by the halos from the 8th magnitude F0 star just to the north. This was the image that finally got me to start saving for new filters that didn\'t have this halo problem as the Astrodon Generation 1 filters that came with the camera (used) when I bought it over 5 years ago do. I didn\'t get them until months later, unfortunately. Anyway, that star cast a lot of noise about this area creating a processing nightmare. The galaxy to the west, ASK 236801.0 appears to have some tidal plumes about it. But those may be noise from the glare of the star as it has a redshift distance of nearly 1 billion light-years and thus not involved with Arp 151 in any way. Though the SDSS image does seem to show some fuzz to the eastern side of it. They too were bothered by halos from the star, just not as severe as mine.

There appear to be two galaxy groups in the image, one with a distance of a bit over 900 million light-years is centered near the left edge of the image. Its coordinates match that of a galaxy. I\'ve marked them at ASK 237033.0 indicating the distance to the galaxy and cluster respectively. The galaxy is also in the 2MASX catalog as a microwave source. The cluster is SDSS-C4-DR3 3275. NED lists it as having 12 members but gives no size. I see 13 in my image alone at about this distance. With the center of the cluster near the left edge, I\'d expect a lot more east of my image. There are three more galaxies in the image at 640 million light-years, also along the left edge. They must be in some group as well. Again I didn\'t go searching farther east than my image to try and find it. 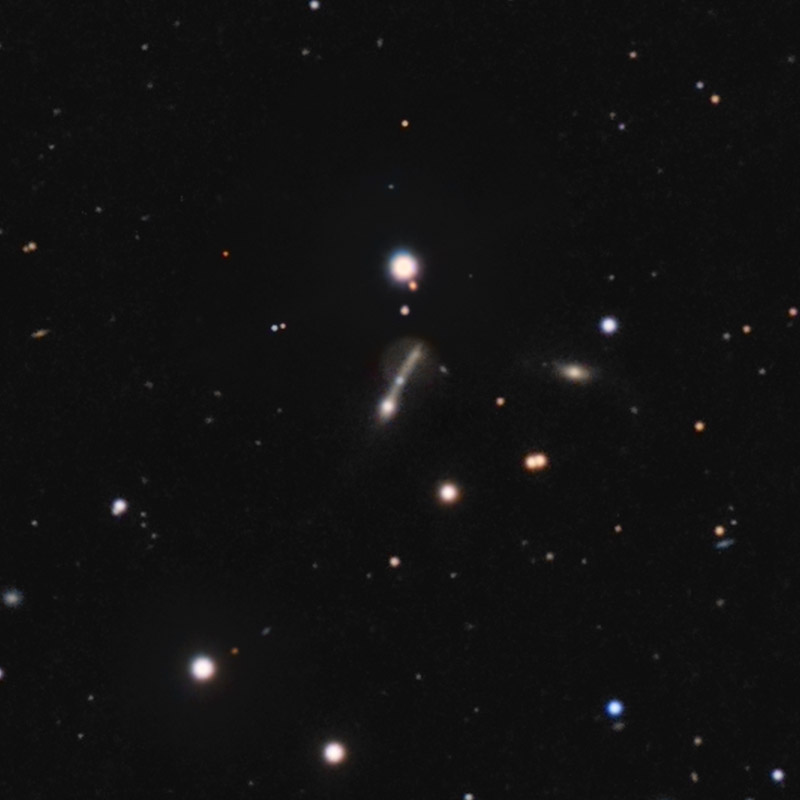 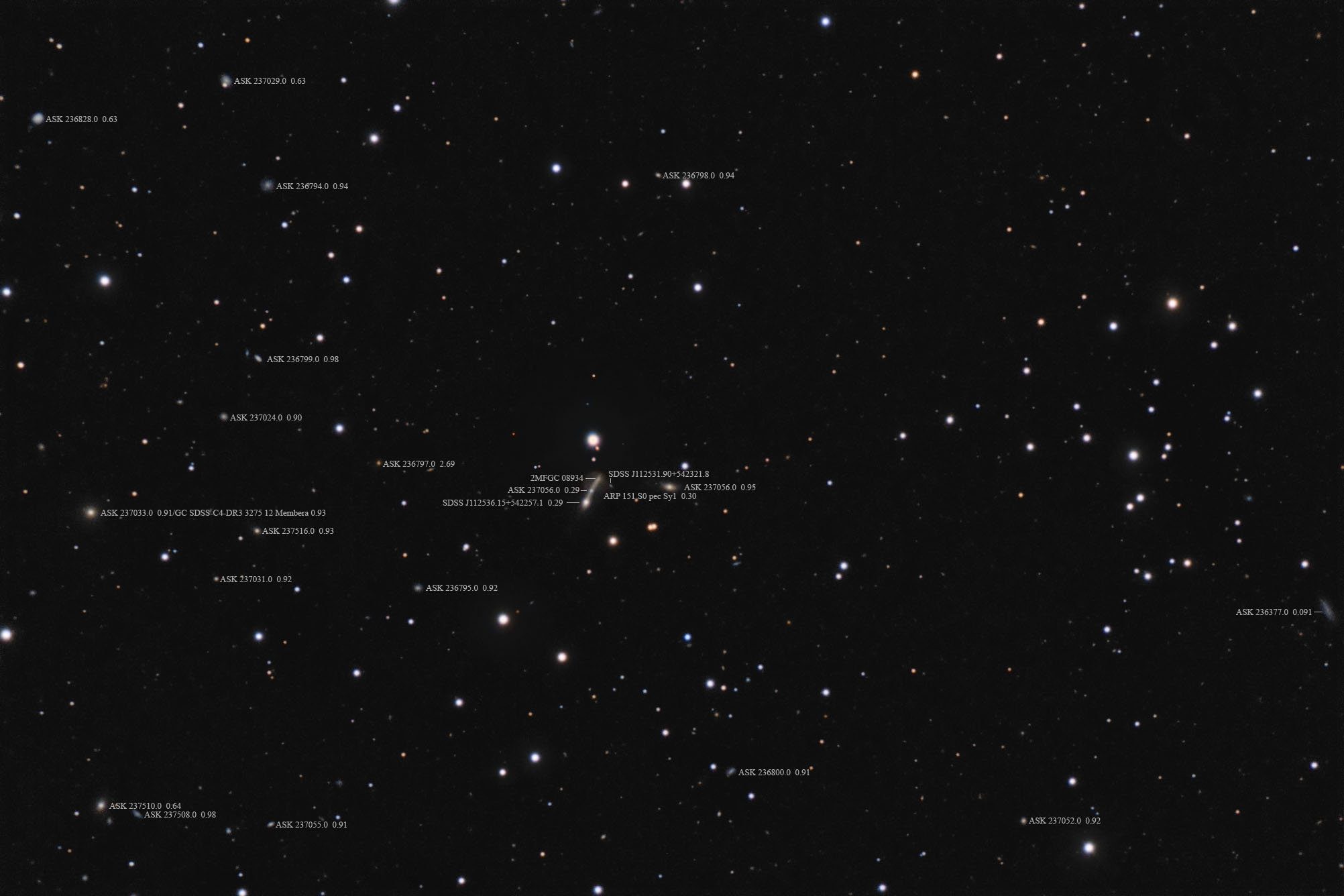 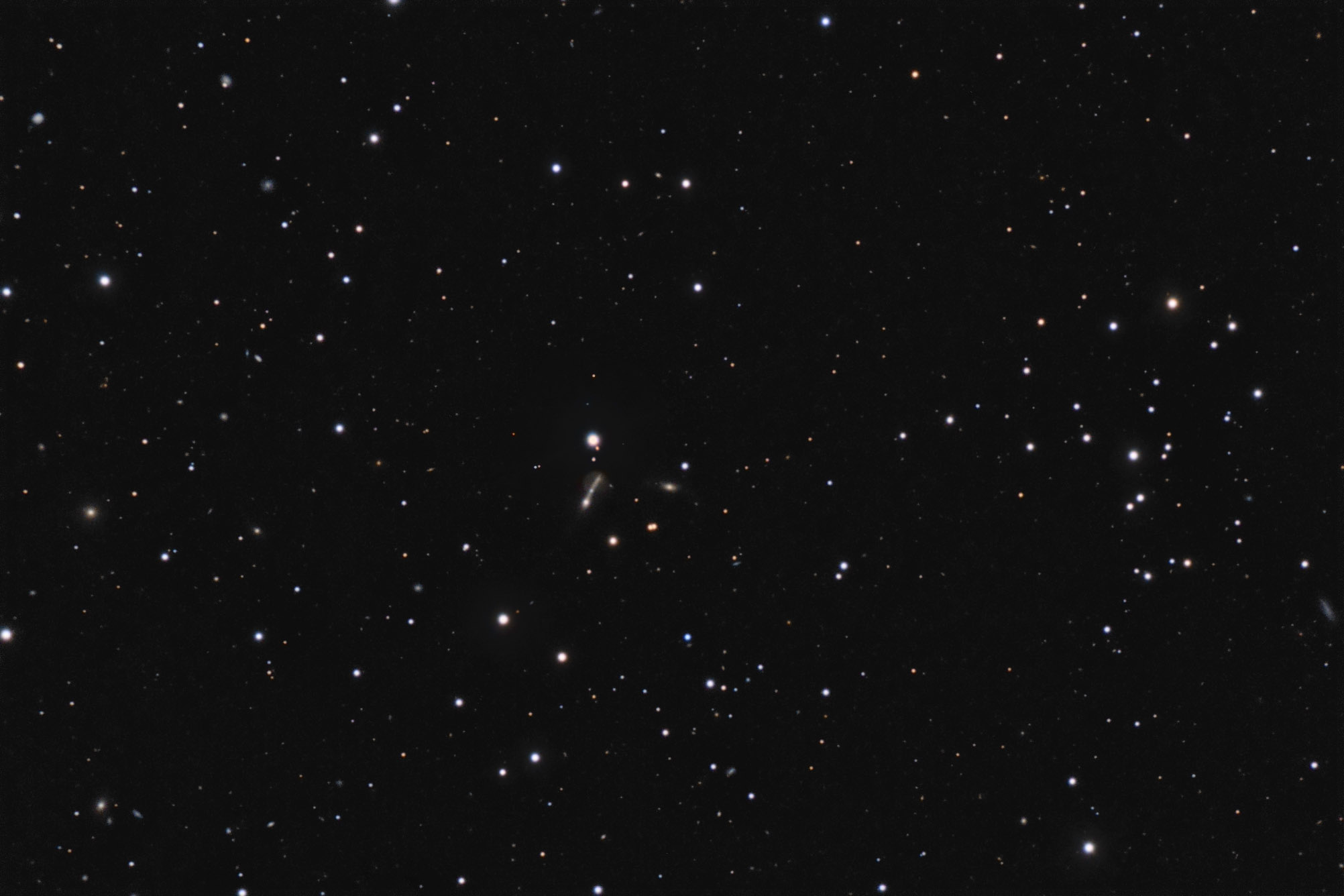