I started a run on ARP 155, also known as NGC 3656 and went to bed. When I got up I found the temperature had dropped nearly 20C during the exposure. This was a major test of my temperature compensating focuser which constantly readjusts the focus based on the temperature every few minutes. I figured thermal lag in the scope would have it ahead of the curve but it was right on. The only problem is my image scale changes and the final image was a good 40 pixels bigger than when it started. So simply stacking them didn\'t work. I had to resize every frame to compensate. What a pain. There is software to do this but it is expensive (I since got it anyway). A bit more than I wanted to spend at the time this was taken. Also as the image size changes so does the vignetting meaning the flats for the start were right but those for the end didn\'t begin to compensate for the vignetting correctly. I had to use pseudo flats to compensate. That meant I couldn\'t dig down into the noise level like I would have liked. But it is my first image under perfectly clear skies in 7 months so I can\'t complain too much.

In any case, the image did turn out quite well after all day of trying to compensate for the temperature problems. Still since seeing wasn\'t very good I should retake this one but in over 8 years that hasn\'t happened.

This galaxy is about 135-140 million light-years away based on the redshift data I found. I located three papers I could read online without paying for them and all three came to very different conclusions about this galaxy. One said it was just an irregular galaxy. That is hard to swallow. Another said it was the product of a near collision of two galaxies but didn\'t specify what types. They seemed to indicate the result was an elliptical irregular galaxy. The third said it was the collision of two disk galaxies (spirals). To me, it appears like a spiral and an elliptical collided. Though that blue ring that lines up with the dust lane is hard to explain by any standard theory. So is a dust lane that looks like two dark wedges. While it may appear the part of the ring to the left is closest to us and the part to the right then goes behind the core of the galaxy I think the opposite is true. That would make the dark lane actually dust in that ring while the left part clear of the core would be the part farthest from us. Very unsymmetrical either way but the first makes more sense to me. Also possible is that the ring is entirely in front of the other galaxy. Figure it all out and your Ph.D. is waiting. Arp put it in his class for galaxies (not classifiable as S or E) that are disturbed with interior absorption.

Adding to the interest are the reddish star-like objects around it. Those are not stars but dwarf galaxies orbiting it. Farther out are three spiral galaxies that are quite red. This is odd. Spiral galaxies like they are should be reddish in the core but then blue in the arms unless star formation has ceased some time ago. This is seen in the spiral galaxies toward the edge of the frame. Makes me wonder if the red color of the dwarfs and these three spirals isn\'t due to dust thrown out of the colliding galaxies into deep space around them. Not having access to spectral data on these galaxies I can\'t tell but it seems possible. Oops. Since this was written distance data on some of these became available and is shown on my annotated image. These aren\'t dwarf around Arp 155 as papers I saw indicated but distant galaxies reddened by their several billion light-years distance.

Note the spiral at the bottom below NGC 3656. That\'s PGC 34975. It has one arm severely tidally disrupted and pulled out from it by some distant collision. The arm wraps faintly around the western side of the galaxy then back north of the galaxy ending northeast of the galaxy. The area between it and the rest of the disk is faintly visible as well. Its redshift shows a distance of 370 million light years so it isn\'t related to NGC 3656 in any way. Just a coincidence that adds interest to the image.

ASK 236497.0 to the lower right is listed as having a candidate BH nucleus. BH at NED stands for black hole. Since most galaxies have a black hole in their nucleus I don\'t know quite what they are trying to say. Probably something like a candidate AGN?

PGC 034895 to the lower right appears to have two blue blobs at its north end. Are these star clouds? Are they the result of something it ate? Is there more than one galaxy here? I found nothing to answer my questions.

There are a heck of a lot of really distant galaxies at a billion or so light years in this image. One group is seen above PGC 34975, another group at the lower right corner and dozens of others scattered about the frame. If it is star-like but fuzzier than it should be or elongated it is a galaxy, not a star. Their great distance puts a lot of dust between us and them so they do get reddened by the dust. Look close in any part of this image and you\'ll see many of these. A couple hundred overall. Keep in mind, that due to the flat problem I am not going as deep into this image as I could with proper flats. Unfortunately, there\'s no way to take flats that cover this temperature range so this is the best I can do until I retake it under more steady temperature. But I have a ton of objects that haven\'t been looked at at all so that will have to wait for some time in the future.

I\'ve since prepared an annotated image. NED shows a galaxy east of Arp 155 as a possible dwarf galaxy but then lists its distance as 1.29 billion light-years. That makes it some 130,000 light-years across, possibly bigger than the Milky Way we live in. It isn\'t the only one so listed but is the biggest. Why this discrepancy I don\'t know. 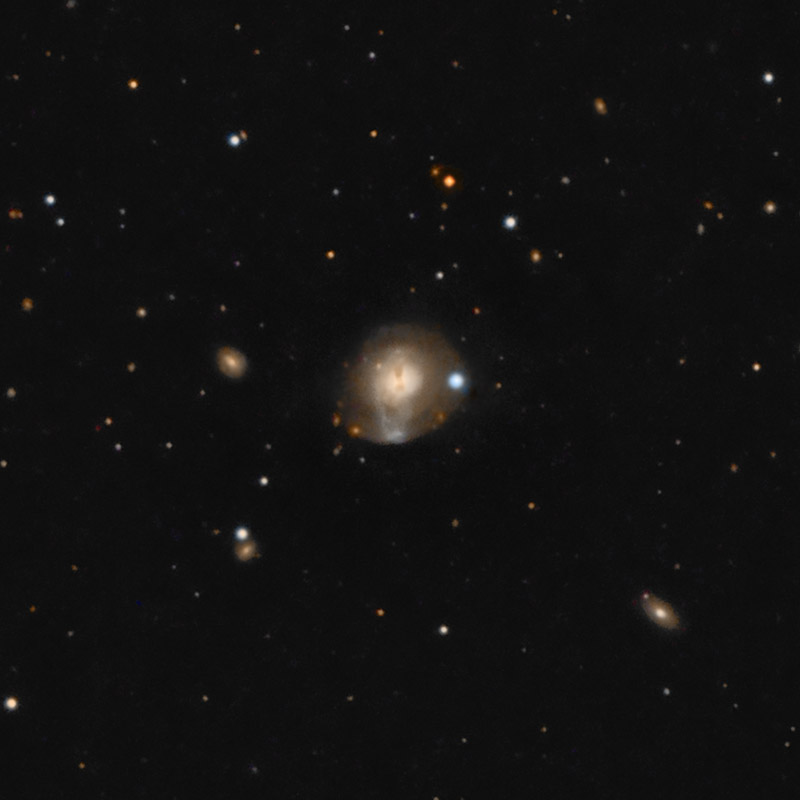 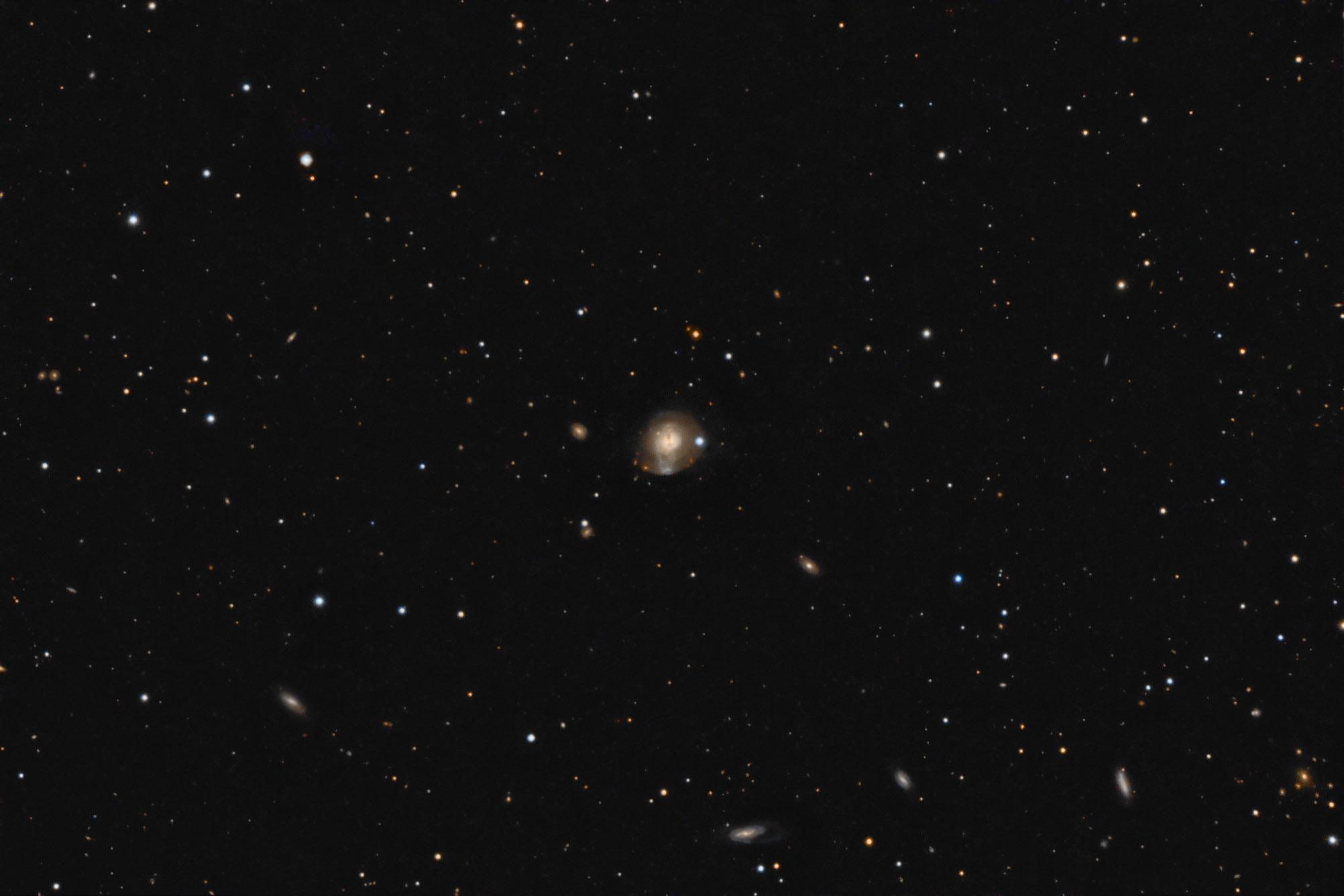 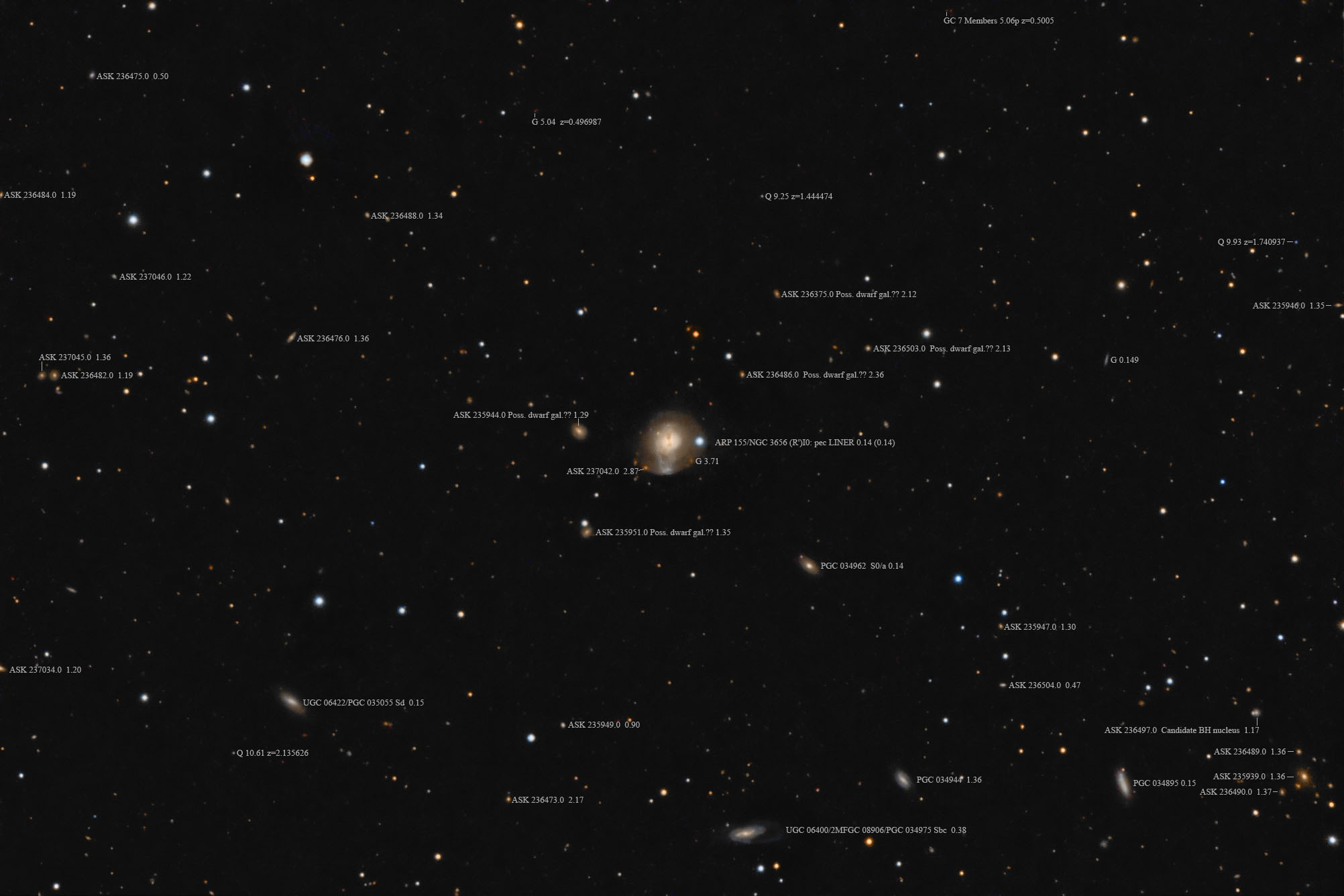