Arp 157/NGC 520 is located in the constellation of Pisces the fish below the Great Square of Pegasus. This one has been the source of some debate over the years. Today it is seen as two galaxies in the process of colliding and likely merging. But in Arp\'s time, it was seen as a single galaxy similar to M82 though oddly he classed M82 in his miscellaneous category while Arp 157 is classed as Galaxies (not classifiable as S or E) disturbed with interior absorption. So he was apparently on the fence with this issue. Even as late as the 70\'s the debate was unsettled. Comments like this were in the literature of that era: \"Inspection of the original plate suggests that NGC 520 is not a collision of two galaxies but rather a system of the M 82 type (Sandage)\". It appears the images of that era just didn\'t show the detail that today\'s do. In my image, you can clearly see two galaxies. One appears of the type of NGC 3628, the hamburger galaxy, in Leo. It\'s dust lane dominates and also hides the core same as with NGC 3628. The core of the other galaxy is seen to the northwest (upper right) with a more steeply tilted dust lane below it. The interaction has created lots of tidal distortions. The main one being a tail that first goes down then arcs to the east (left) and comes back up as a very faint fan. I\'ve seen comments that it does or may connect to UGC 957 the big fuzz blob to the upper right of Arp 157. That isn\'t seen in my image though it may show with more exposure time. Arp 157 has a redshift distance of 90 million light-years while that of UGC 957 is 85 million light-years by its redshift. Close enough that they may have gravitationally interacted in the past. Though it\'s rather symmetrical shape would argue against that. Few galaxies in the image have redshift distances.

The galaxy was discovered by William Herschel on December 13, 1784. It isn\'t in either of the Hershel 400 observing programs, however.

Even the rather bright disk galaxy below and left of Arp 157, PGC 5195, has no redshift data I could find. About the only other object with redshift data is the quasar [HB89] 0121+034 at 3.7 billion light years. Follow a chain of stars starting at the kink to the left of the tidal tail. Two faint stars, a rather bright orange star, a somewhat fainter star then a bit of a gap brings you to the very blue quasar. All lie in a nearly perfectly straight line.

Hubble has taken a great image of this galaxy. It can be found at http://hubblesite.org/image/2342/news_release/2008-16 and is south up so appears upside down. Note the star cloud easily resolved by Hubble made up of super hot very young stars along the top edge of the Hubble image. It appears as a blob near the top of the tidal arm in my image. I can\'t begin to resolve the stars thanks to our atmosphere. Since we appreciate being able to breathe I can\'t do much about its distortions. The Hubble page gives a different distance estimate of 100 million light years. Since Hubble has managed to resolve some stars its estimate may be more accurate than pure redshift estimates. If you have the bandwidth I recommend downloading the largest image.

ESA released their image of this galaxy taken with a scope with 100x the light grasp of mine and from atop one of the premier imaging locations in the world. Their image is at http://www.eso.org/public/usa/images/potw1048a/ I was rather surprised that their much larger scope under much better skies didn\'t do much better than I did. Their observatory that took their image (I don\'t know which of the two was used) is at:
http://www.eso.org/public/archives/images/screen/ib-la-silla05.jpg
The scopes are mounted high above ground level to avoid seeing problems at ground level. I did the same but am only up a bit over 16 feet due to zoning limits on the height of buildings around the lake -- and cost of course. 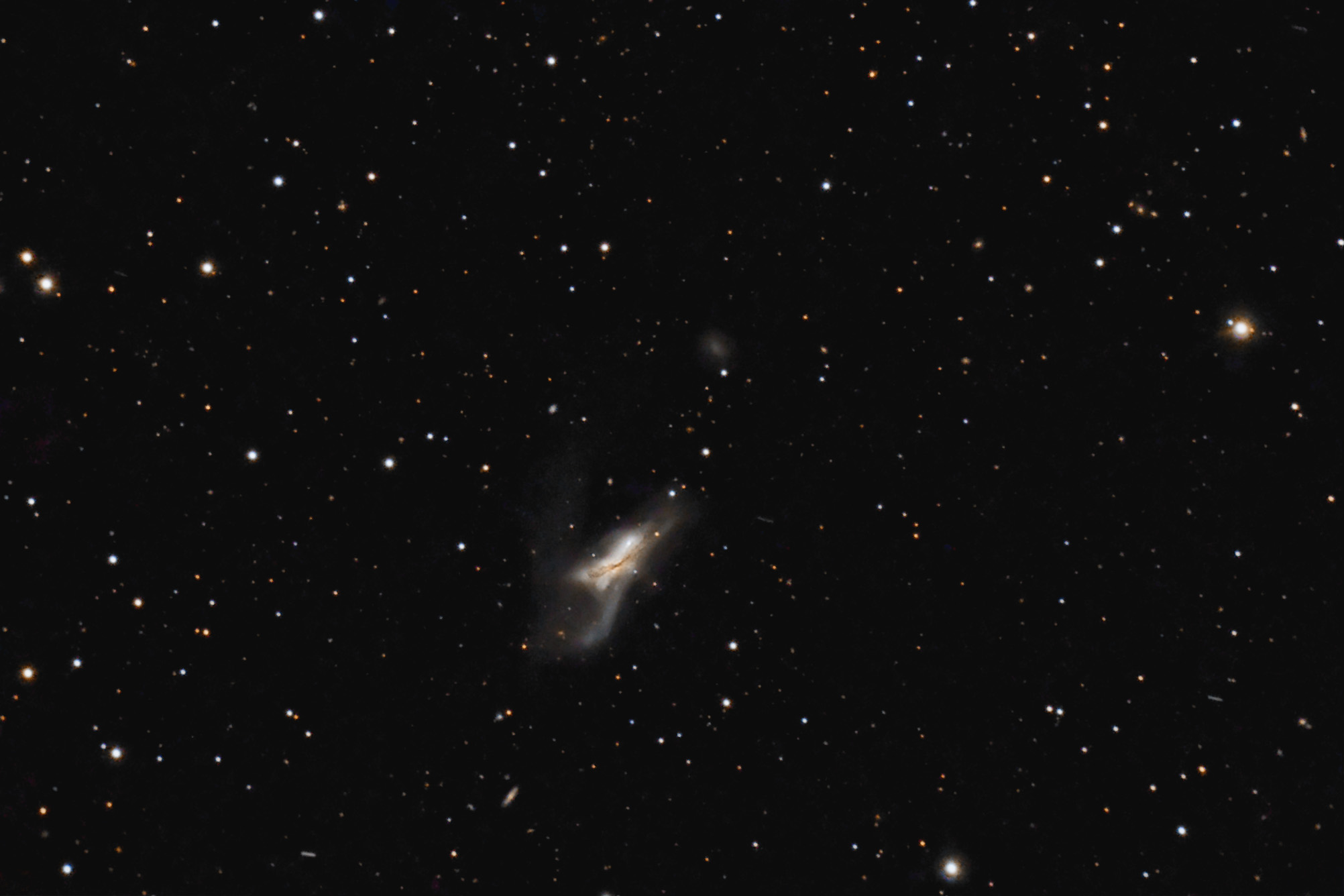