Arp 170 is located in the Great Square of Pegasus at a distance of about 525 million light years. Arp classed it under galaxies with diffuse counter-tails. It is part Hickson 94 which is part of the Abell 2572A a subgroup of Abell 2572. Only the two brightest are part of Arp 170 however. The northern one is classed as E1 while the lower one with the diffuse counter-tail is S0^0 pec. Both are also NGC 7578. One is 7578A and the other 7578B. But which is which is an enigma. The NGC Project and NED both claim the brighter is A. Both say the brighter is 0.6 magnitudes brighter. But they disagree as to which is the brighter! So Prof. Cory with the NGC Project says the northern E1 galaxy is A while NED and several other catalogs say it is the southern S0^0 galaxy. So which is the brighter? At first glance, it does appear the northern one is but when you consider the large tidal plume of the southern one it might be the brighter. It\'s certain the northern one is the easiest to see visually from all reports I have read. Did the Herschels see both? It\'s hard to say from their notes. To add to the confusion some catalogs that use the UGC designations use UGC 12478 for the northern one while others say it is UGC 12477 and of course they can\'t agree on the southern one either. But since the UGC is supposed to be in RA order that would make the northern 12478. Hickson assigned his galaxies by magnitude and agrees the northern is the brightest by giving it the H94A designation. But just when you think you have this figured out another issue develops. The Kanipe-Webb book agrees with NED that the northern galaxy is A but they assign it as Hickson 94B, while NED says it is A. My head hurts. You\'d think all this would be settled by now. Arp had no comments on this entry nor did he enter into the identification debate. The PGC says the southern one is 70933 and the northern 70934. The galaxies were seen as one by William Herschel on September 18, 1784. It isn\'t in either of the Herschel 400 observing programs, however.

I\'m not very certain of the color on this one. Fog rolled in during the initial exposure. It really hit when I started to take the green and then totally ruined the blue. So a couple nights later I retook the green and blue. It wasn\'t until I went to process this I realized the red was hurt by the fog as well. Since I have no measure of the loss of red to the fog I first tried a normal G2V correction and got a disaster showing the red was far worse than I thought. I then made a guess as to the red fog correction based on the spectral type of the K2 star in the image. But when I got it to the right color the galaxies were still odd. I tried some manual tweaking that helped greatly but am not all that sure of the color accuracy here.

While the SDSS hasn\'t covered this area this region is teaming with IR galaxies in the 2MASS catalog, many of which have good redshift data. While my color is likely not highly accurate I do believe the red color of nearly every galaxy in this image is correct. An IR galaxy need not appear red to our eye but they often do. That seems to be the case here. Nor does a red galaxy necessarily mean it is a strong IR emitter. Many in this particular field however are.

I\'ve prepared an annotated version. I\'ve used NED\'s assignment of Hickson letters to the group, as mentioned above this doesn\'t agree with the Kanipe-Webb book as to A and B. Since it appears nearly all the galaxies have about the same distance as Arp 170, being part of Abell 2572, I\'ve just identified the larger ones. Those few that are nearer or further than Arp 170 have their distance noted after the catalog name. Some have no redshift data. I\'ve added NRS for No Red Shift data to the file name when this happened. All others are known to be about the same distance as Arp 170 and thus likely members of the same group. It\'s interesting they all have about the same color. Two galaxies close together aren\'t in the catalogs but two very nearby are. The brighter of the unlisted ones is barely within the error circle for a radio source, NVSS J231822+184352. This nearly marks the center of Abell 2572 the group to which most of the galaxies in this image belong.

I included an unusual galaxy, at least for its catalog designation, LT 32. This is the only designation for the galaxy in NED. It stands for Laird Thompson who compiled a listing of \"Possible ring galaxies near rich clusters.\" There\'s 115 in the list. How this speck of a galaxy is seen as a possible ring galaxy is beyond me. The coordinates match to the pixel. Maybe longer exposures show a faint out ring I didn\'t pick up. In fact, what I imaged has the PSF of a star, not a galaxy so maybe the entire galaxy is too faint and I\'ll I picked up was field star atop it. NED classifies it a R (U) 0. The R likely is for ring but what the other two mean I have no idea. If anyone knows please let me know and I\'ll update this. Note the position is a bit uncertain. It points to a space between the object I\'ve pointed to and the object to its left. That one is clearly a star so I went with the one on the right. Both are within the error circle of its position.

Arp\'s image taken under what looks like near perfect seeing atop Palomar Mountain.
http://ned.ipac.caltech.edu/level5/Arp/Figures/big_arp170.jpeg
Ironic he\'d waste such great seeing on such a low resolution object. Maybe he hoped there was something of interest this seeing would make visible. 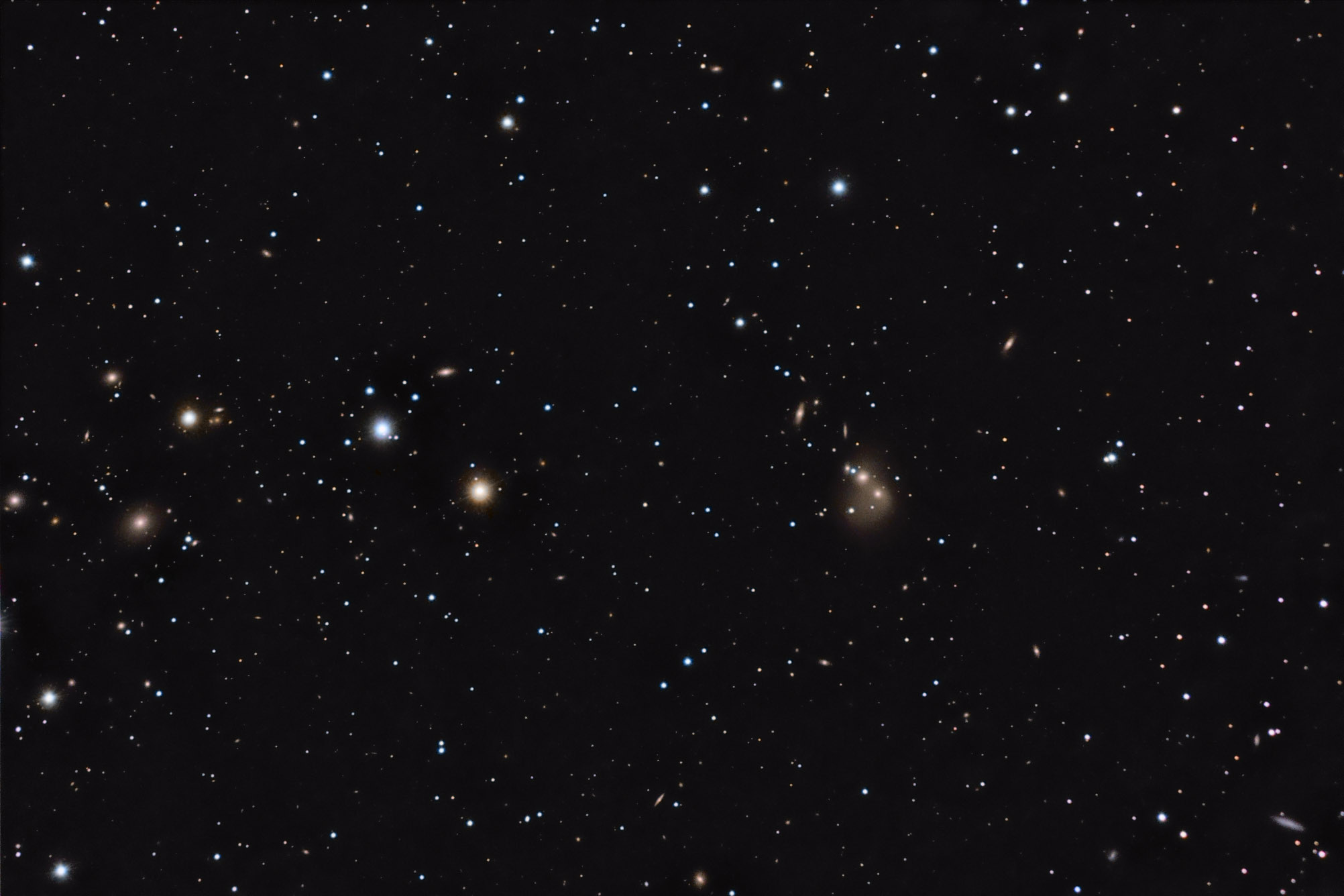 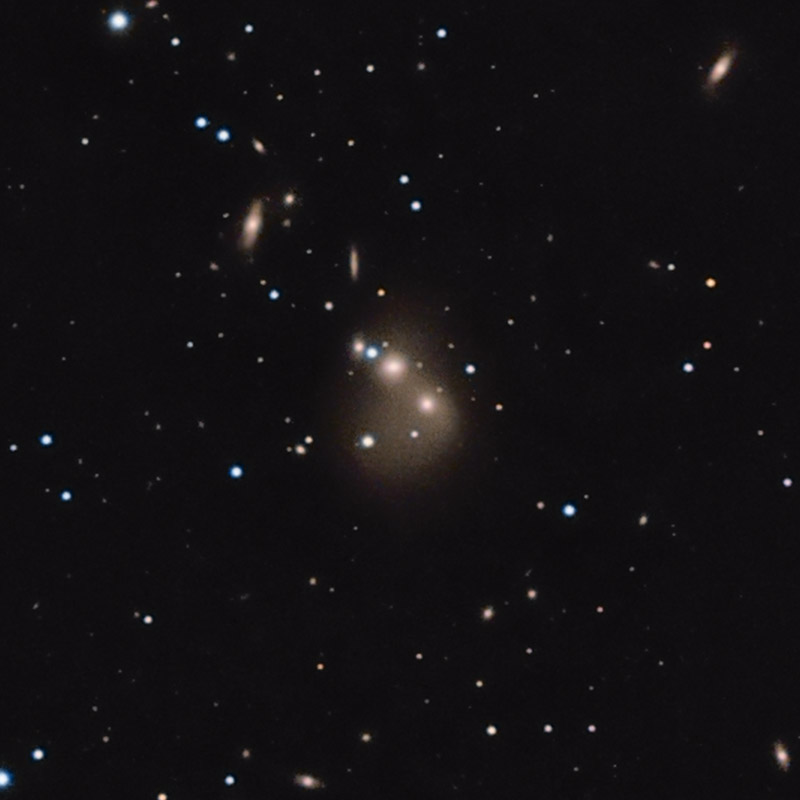 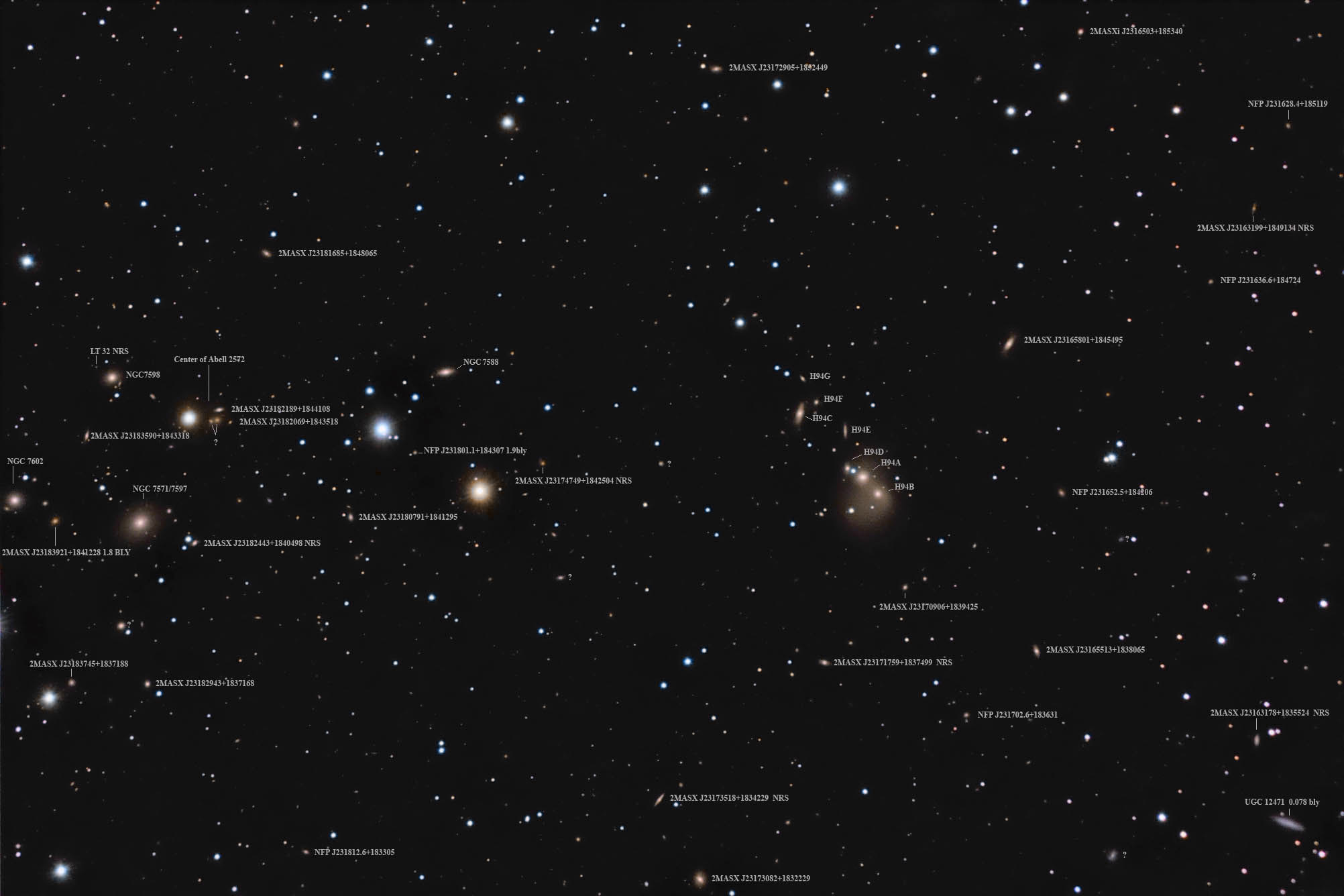