Another twofer image. I\'ll start with Arp 177 since it is near the center of the image. At the time I didn\'t realize Arp 302 was also in the field or I\'d have moved the field to get them both better centered. These galaxies are in Bootes.

Arp 177/MCG +04-35-016 and MCG +04-35-17 fall in Arp\'s class; Galaxies with narrow counter tails. Arp\'s comment reads: \"Very small plume comes off companion galaxy opposite larger.\" It appears the blue plume to the north-northwest coming from MCG +04-35-016 is the \"very small plume\" while the large diffuse plume to the east of MCG +04-35-17 refers to the \"opposite larger\" part of the comment. The western galaxy with its plume reminds me of a comet. Redshift data is only available for the western (-016) comet-like member. That puts it at about 460 million light-years. I found very little on this pair. NED made no attempt to classify either galaxy.

Arp 302/UGC 09618a and b (b is the north member) is in Arp\'s category for double galaxies. Arp had no comment on this pair. They appear to be barely interacting. Some star plumes seem to be starting as there is a halo of stars around both galaxies. The northern member is a starburst galaxy. It\'s not necessary for an interaction to start a starburst but it certainly helps! This pair is also about 460 million light-years distant so both of these are part of the same local group of galaxies. NED classes the northern one as Sb with strong HII emission and a LINER spectrum. Signs of a disturbed galaxy. Problem is the southern member is rather normal though its spiral arms are a bit kinked. It is classed as Sc. I\'ve attached a Hubble image of this pair.

There is very little information on this area. Sloan shows about 3000 galaxies in the area but has little on any of them. The only other galaxy with any redshift data is the edge on galaxy north of Arp 177. It is UGC 09606 and is in the flat galaxy catalog as FGC 1828. Seems to have too big of a core to make that catalog. Apparently not. A faint hint of a dust lane can be seen crossing the core area but I couldn\'t pull it out of the disk. It is classed Sbc by NED with a redshift that puts it much closer at 230 million light-years.

North northwest of Arp 302 is a small, very orange galaxy surrounded by a lot of faint galaxies as well as some much closer galaxies. One of the close ones is a very blue spiral with an orange edge on disk galaxy to its right. The orange galaxy I\'m referring to is the distant elliptical galaxy almost due east (left) of the blue spiral. It anchors the galaxy cluster NSC J145649+244122. NED shows it as richness class 2 (80-129 galaxies) with a distance of 1.5 billion light years. The galaxy is SDSS J145651.46+244203.5. There\'s no redshift given but since it is considered to anchor the cluster its safe to assume the same distance. The blue spiral is MAPS-NGP O_383_0185334. That\'s the only catalog entry NED has for it. It is not in the Sloan catalog though the westernmost point of its faint arm is listed in NED as a separate galaxy. Looks like a bright knot to me. The orange spindle is MAPS-NGP O_383_0185301. Again, it\'s not in Sloan either. The rest of the field is just as frustrating.

Sorry about my stars. Somehow I managed to turn off PEC and since I don\'t guide the result is rather imperfect stars. I need to redo this one and get round stars. Maybe that\'s why the dust lane in the flat galaxy is so hard to detect. 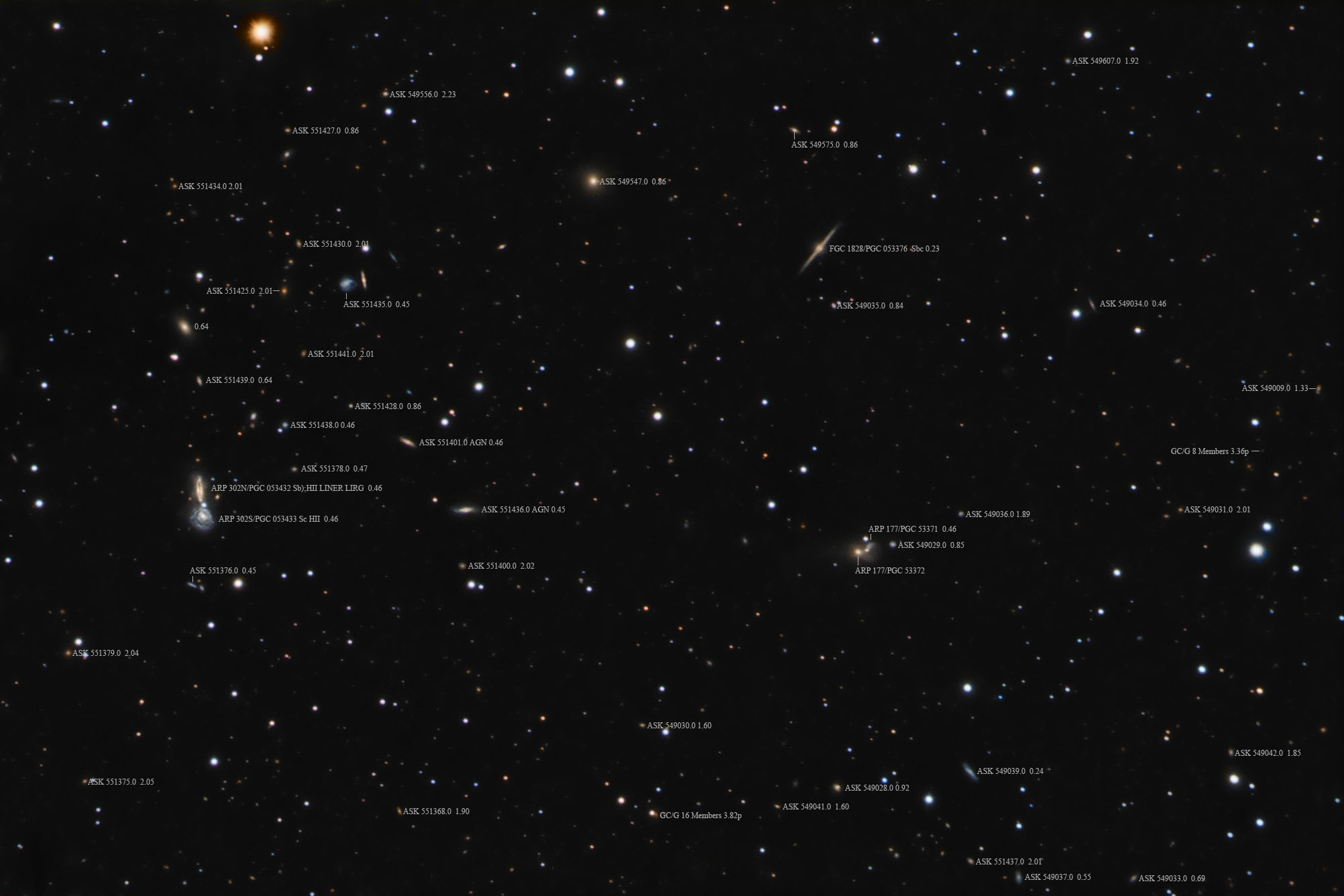 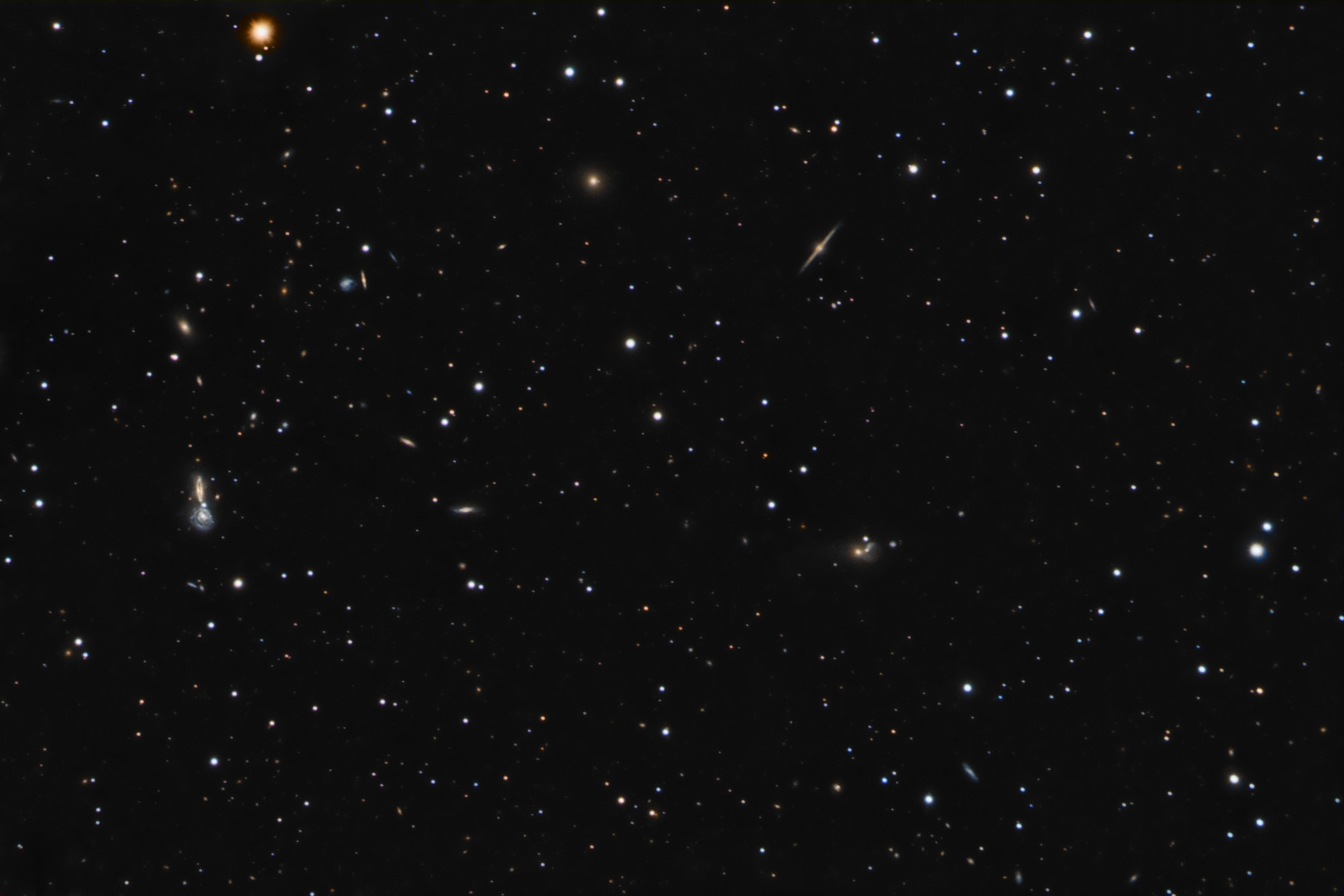 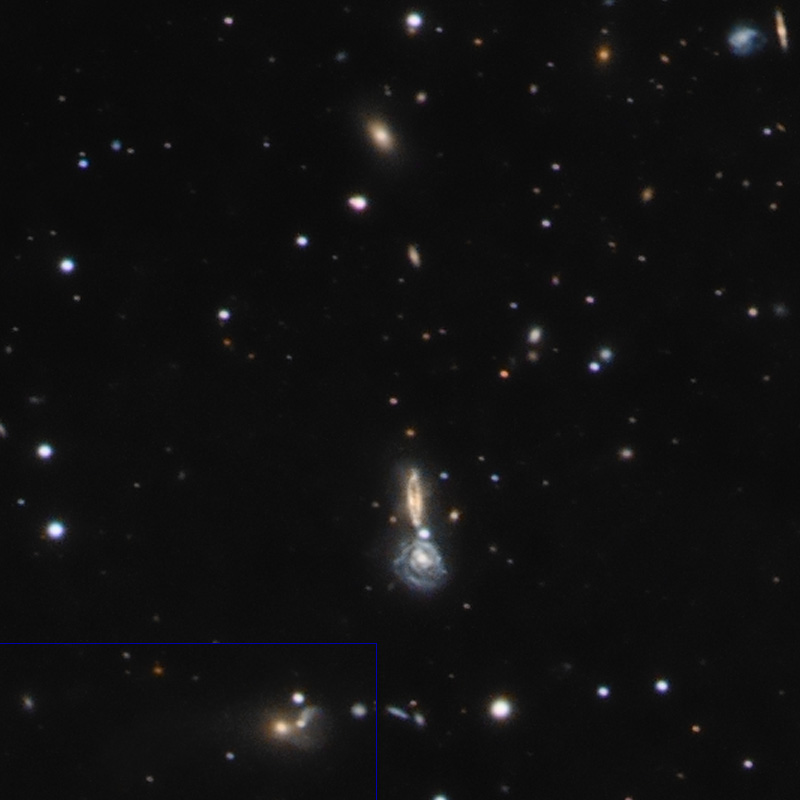 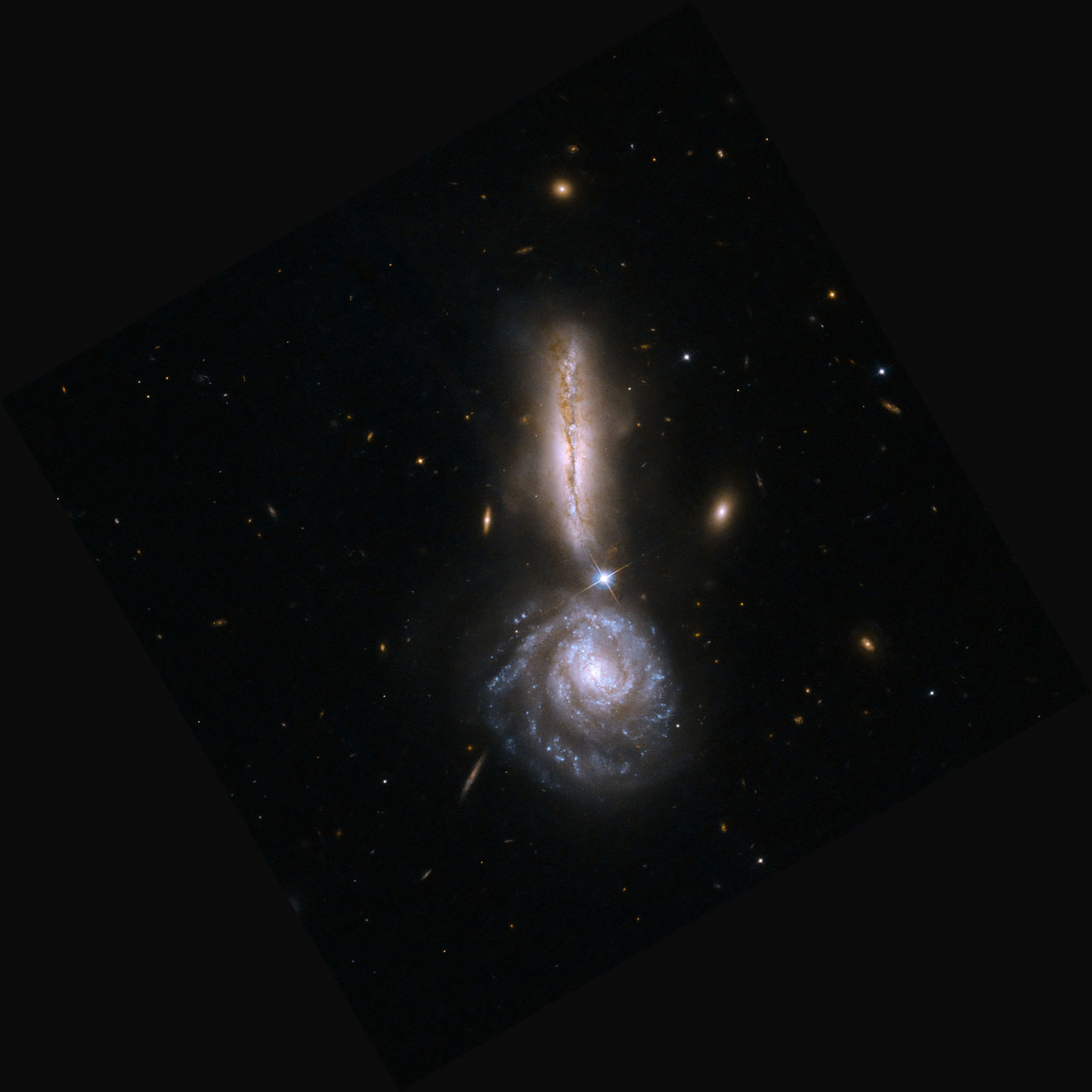