Arp 191 is a pair of colliding galaxies in the constellation of Leo the lion. They are a bit under 400 million light-years away. Arp made this comment about them: \"Acute bend in link between galaxies; plumes from stellar-like images.\" He classified them under Galaxies (not classifiable as S or E): Narrow Filaments. Two filaments are quite obvious. One connects the two galaxies, and is kinked as his comment mentions. The other comes from one of the blue condensations in the eastern galaxy. This galaxy pair was taken under rather poor skies and I was unable to resolve them like I\'d have liked. Notice in Arp\'s image that one of the blue knots in the eastern galaxy, northern one, is composed of at least three star clusters. It\'s from these the kinked plume appears to come. The pair is known as UGC 6175.

The western galaxy is classed as SAB0- pec. While the eastern one is classed as SAB(r)0+ pec. The galaxy CGCG 095-114 to the southwest is at about the same distance and likely a member of the group. One catalog includes them as a 3 member group under the [RPG97] 114 designation. Slightly closer to Arp 191 but to the northeast is MCG +03-29-001. Unfortunately, there\'s no distance data on it. It does appear possible it too is about the same distance from us as the other three. West and a bit north of CGCG 095-114 is MAPS-NGP O_432_0257420. Well, north of this latter galaxy and a bit east is SDSS J110642.31+183148.7. No redshift data was found for these last two or any other galaxy in the image in the NED database.

The large galaxy at the top of the image is UGC 06171. It is far closer at about 70 to 75 million light years depending on who you listen to. I was originally going to image this when east of the meridian but clouds moved in and didn\'t clear until it was west of the meridian. I\'d noticed this galaxy and made a note to move Arp 191 below center to be sure to pick it up. But when I flipped to the other side of the meridian that inverts the camera so I now had to move it the other way but I obeyed my note, started the image and went to bed. I discovered my mistake only now, some 8.5 months later. Too late to correct it so this galaxy is slightly cut off. I should have said to move Arp 191 a bit south of the center and all would have been fine. Sometimes my dumbth gets in the way. When I say the clouds cleared there was still a rather thick haze as well as very unstable air. Seeing was almost 4\", compared to my 2.5\" normal for this period limiting my ability to record the detail needed. Another one for the reshoot list! 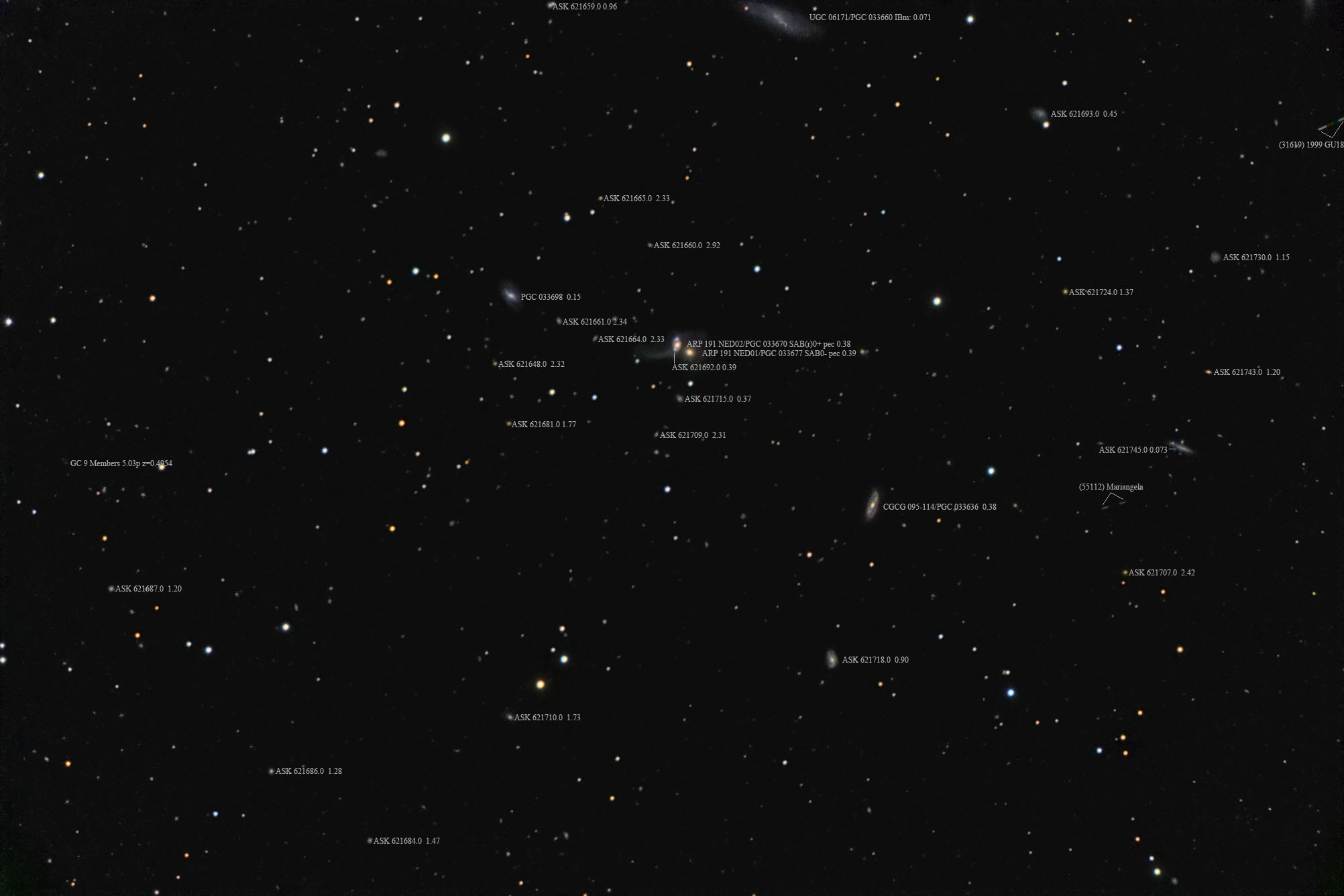 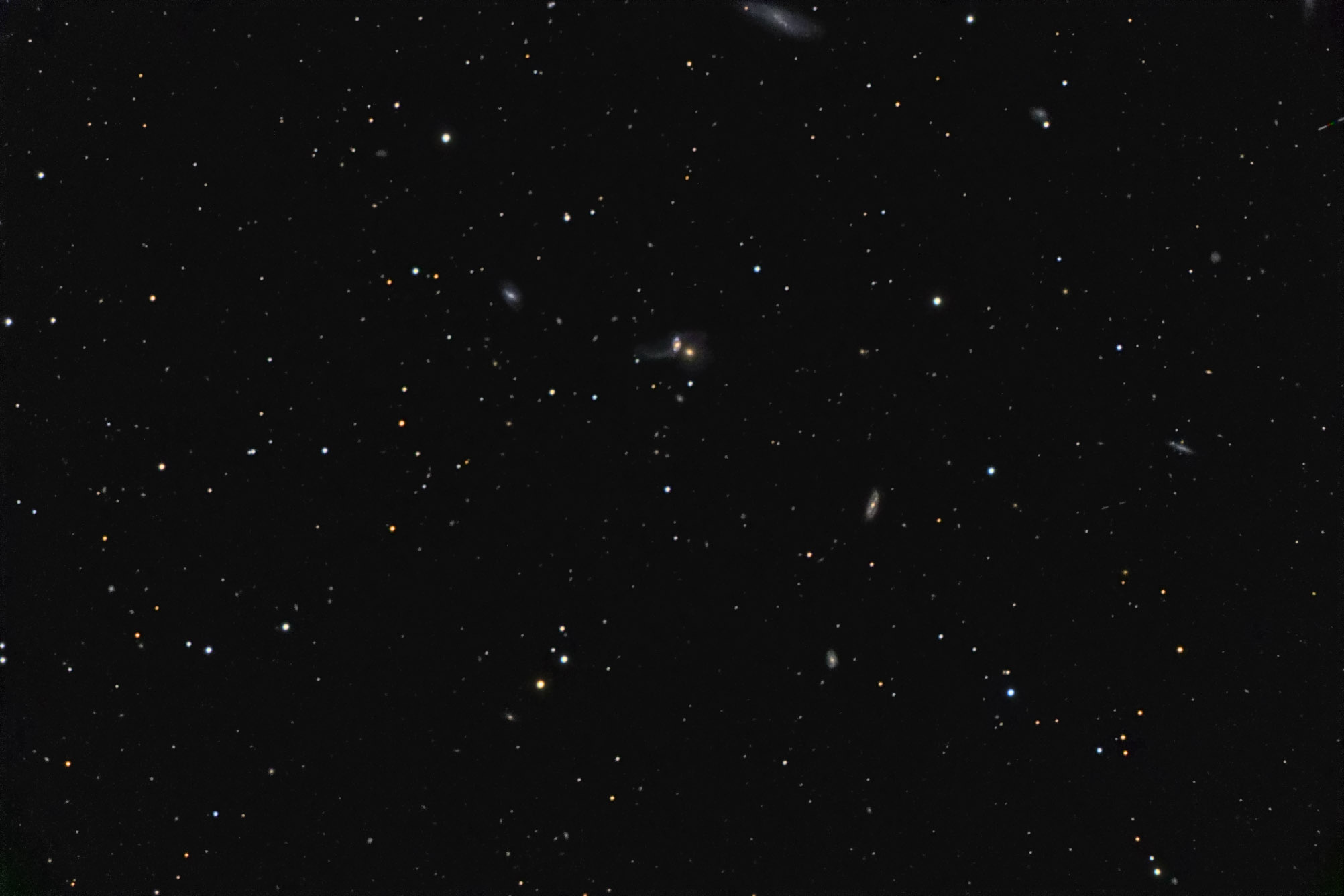 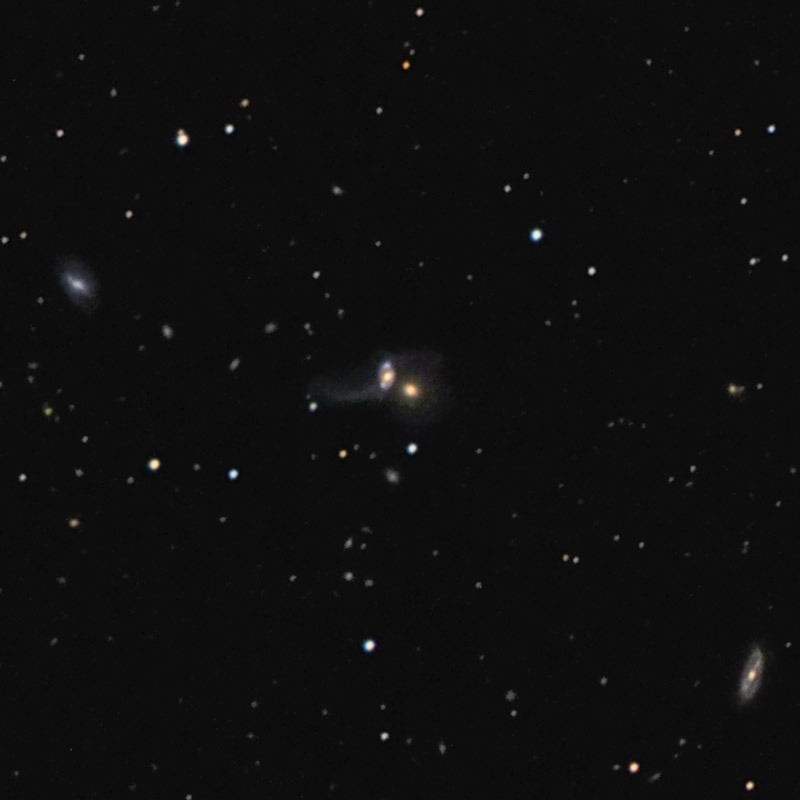