Or maybe the Broken Stinger Galaxy.

Arp 197 is a pair, maybe trio, of galaxies in western Leo nearly 300 million light-years distant. Arp put them in his class galaxies with material ejected from nuclei. His comment reads: \"Straight filament off one end of bar, kink at end of filament.\" The pair Arp saw is known as UGC 6503, a galaxy pair. The big galaxy is IC 701 and is the only one with redshift distance. The other galaxy in the pair, if it is a pair, is the round galaxy just left of the tip of the filament. Besides being UGC 6503 NED 02 it carries the separate designation of SDSS J113103.26+202831.7. IC 701 is classed as SB(rs)dm pec so is a barred spiral which is quite obvious from my image. It was discovered by Lewis Swift on April 22, 1889.

While Arp puts it in his category of material ejected from the nucleus it is quite obvious the filament comes off the end of the bar not the core of the galaxy. The filament fades out and then reappears a bit to the east of the track it had been on before fading down. When it starts up again it passes by SDSS J113103.26+202831.7 as if not being bothered by its gravity and then has a very small bright blue knot before continuing on a few more seconds of arc. The SDSS considers this a separate galaxy, hence my comment it might be a trio. It is identified as SDSS J113103.14+202837.3.

Without any redshift data on either of these two objects its hard to say what is going on here. I really doubt that UGC 6503 NED 02/SDSS J113103.26+202831.7 is involved at all with IC 701 even though it is considered to be a pair with the IC galaxy. It shows no hint of distortion yet is far smaller so should be more bothered. Actually, except for the filament, IC 701 is rather normal looking. So what is going on here? Wish I had a glimmer. I can\'t find any papers that really shed much light on this. Is the blob at the far end of the filament a separate galaxy or just a knot in a filament? If part of the filament what caused it in the first place. There seems no candidate around. Could the filament and the knot be the remains of a dwarf galaxy that passed IC 701 and got torn apart into the filament in the process? If so why is IC 701 rather normal looking but for this filament? Lots of questions but no answers I could find. But there may be a candidate. Unfortunately, I didn\'t know about it at the time I took the image. I should research before imaging rather than after. It is almost due east of Arp 197 just out of my frame. It is a nice barred spiral known as UGC 06525 and classed as (R)SB(r)b:. It shows some distortion of its arms, especially the northern one. Having a redshift that puts it only 4 million light-years closer than Arp 197 it is certainly related and may be involved though I tend to doubt it\'s involvement. While I didn\'t capture it I\'ve included the SDSS image of it.

Northeast of Arp 197 is a cute pair of galaxies, MCG +04-27-055. Unfortunately, there\'s no redshift data on the lower galaxy. Are they a true pair? Are they interacting? Or are they just two in the same line of sight? For now, I vote for the latter. More unanswered questions.

You probably noticed the group of distant galaxies in the upper right corner of my image. This is the Abell galaxy cluster 1278. It is listed with a diameter of 30 minutes of arc though most are in a smaller area. The label marks the center of the group as defined at NED. It is listed at 1.65 billion light-years

There\'s not much redshift data on this field. What there is I\'ve shown on the annotated image. Lots of interesting galaxies aren\'t labeled with distance due to this lack of data.

There are 4 asteroids in the image. They too are noted on the annotated image. While the Minor Planet Center shows their estimated magnitudes range from 19.2 to 20.4 they all appear virtually the same brightness in my image. Apparently, their magnitude estimates aren\'t all that accurate.

Star shapes are rather odd. This night started out rainy so I didn\'t open up the observatory. Suddenly the clouds parted and seeing was quite good but the tube hadn\'t had time to come to temperature. Not wanting to lose any more imaging time than necessary I rushed the cool down time and paid for it in tube currents in the first two L images. The last two were pretty good but the first lousy and second fair. This is the result. They didn\'t seem to harm the image of the galaxy but sure did the brighter stars. 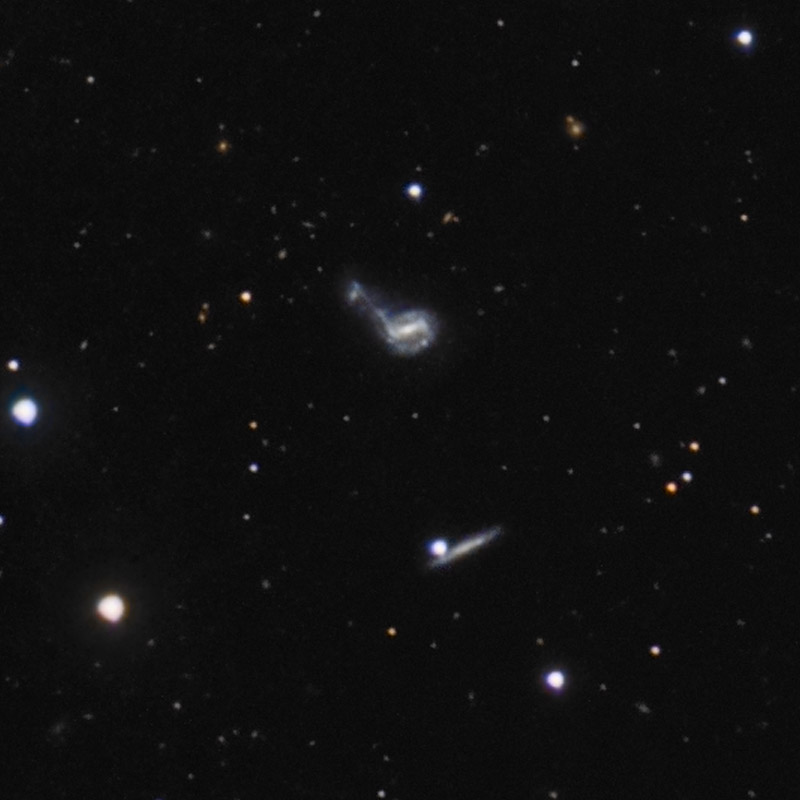 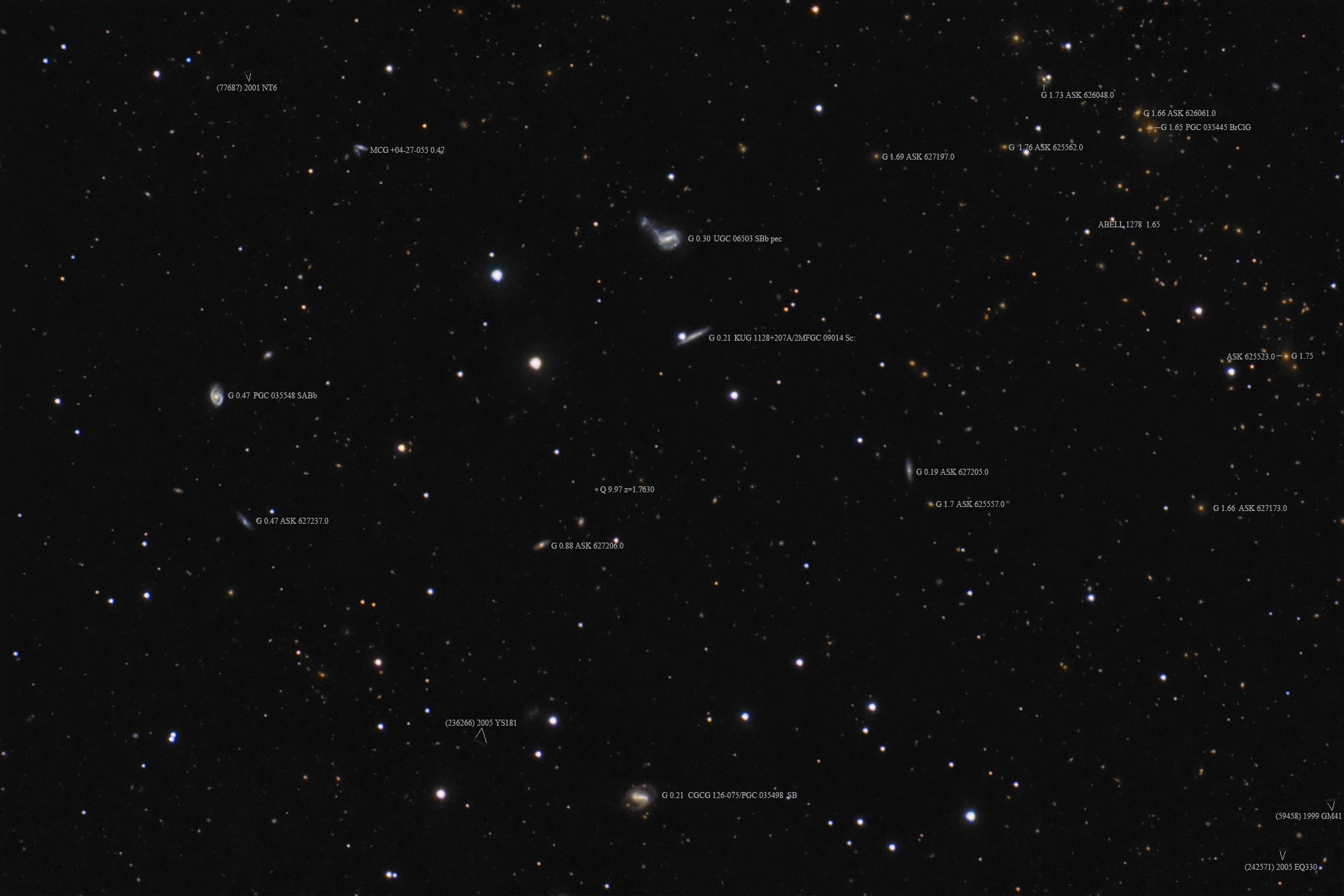 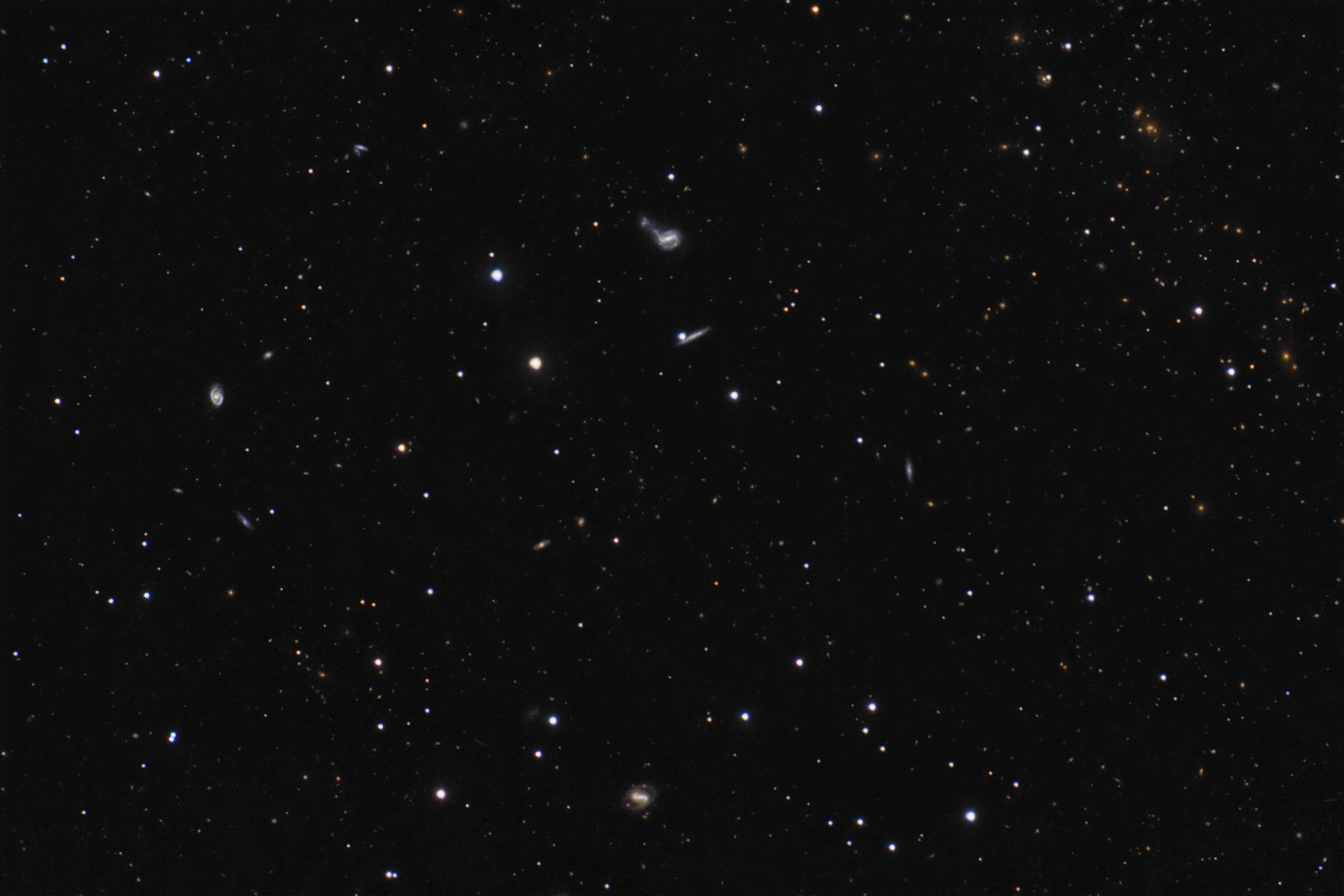