If there is ever a freak show for galaxies this mess would be the headliner.

Arp 204 is a two or three galaxy mash-up in northern Camelopardalis less than 6 degrees from the pole. The VV, CGCG and CGPG catalogs call it three while NED and the UGC say it is two. Arp is mum on this having no comment. He did put it in his oddball class for galaxies with \"material ejected from nuclei\". What he sees as ejected from what is not mentioned. The CGPG has this note on it: \"Blue post-eruptive triple galaxy, interconnected by pronounced thin bridge, length 2\' south-southwest to north-northeast.\" Oddly, NED shows positions for only two of the three CGCG galaxies. I have to assume it is the same as the VV catalog sees but since it isn\'t in NED this is only a guess. NED lists the third VV member as part of a galaxy rather than a separate galaxy. It is the blue blob at the southwest end Arp 204. I\'ve pointed these various objects out on the annotated image.

There is another interesting pair of possibly interacting galaxies, UGC 8394. While NED makes no attempt to classify any part of Arp 204 it does classify the northeastern galaxy of UGC 8394 as Sb and the southwest member as \"compact\". That is usually reserved for a small, mostly round, tight, nearly featureless ball of stars. This looks to me to be a rather tight spiral, possibly a dense Sa galaxy. I\'ve never seen a compact galaxy with such a prominent spiral structure before. A note at NED says they are interacting. The NE galaxy shows a faint plume to the northeast and one to the southwest connects the two galaxies. So yes, they are likely interacting. The dense southwest galaxy is likely inflicting most of the damage. The CGPG says: \"Pair of interconnected galaxies. No. 1, patchy blue compact, m_p_ = 15.7. No. 2, neutral Sb, 40\" north-following No. 1, m_p_ = 17.0.\" NED has no redshift data on the pair, unfortunately.

South of both Arp 204 and UGC 8394 is UGC 8414, a Sm spiral about 200 million light-years distant. It appears to be somewhat closer than Arp 204. There is something just off its southeastern (lower left) arm. I can\'t tell for sure if it is another galaxy or just a somewhat detached star cloud of UGC 8414. There are several other galaxies in the immediate area. None are listed at NED.

At the very top of the image is UGC 8380. NED lists it as Scd: saying it would be a rather open armed spiral if we could see it more face on. Again no redshift data is available. In fact, only one other galaxy in my image has a redshift value at NED. That puts it about 2.1 billion light-years out. While NED doesn\'t classify this very distant galaxy, it does indicate it is a narrow line Seyfert 1 galaxy. I\'ve listed by catalog name every galaxy NED lists for my image. When you get only a few degrees from the pole (less than 6 in this case) NED has very little coverage. The vast majority of them aren\'t listed at NED at all. Most that are, as you can see from the annotated image are from the 2MASS survey of galaxies with strong emission at 2 microns. This is a region that falls between normal infrared and radio frequencies. 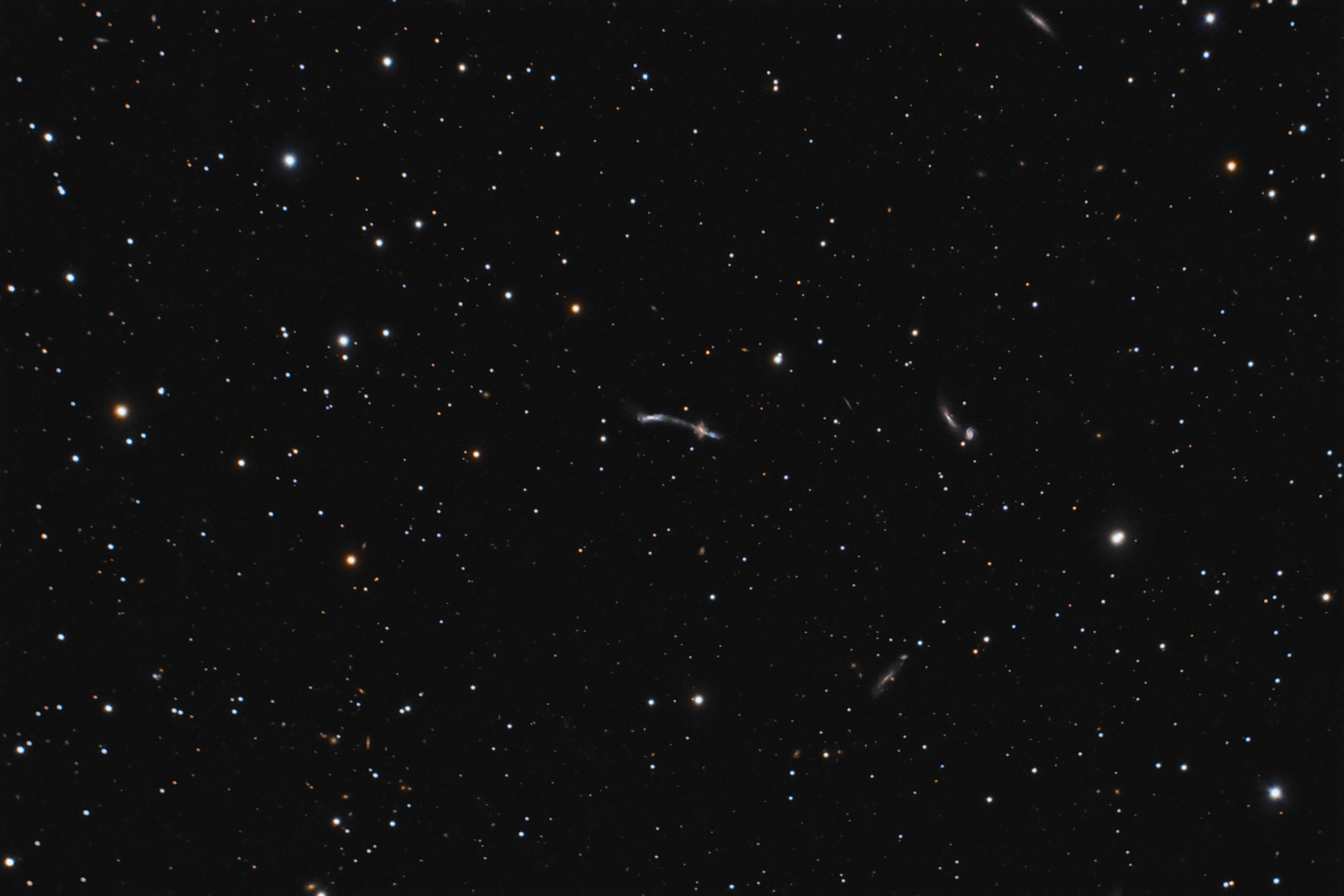 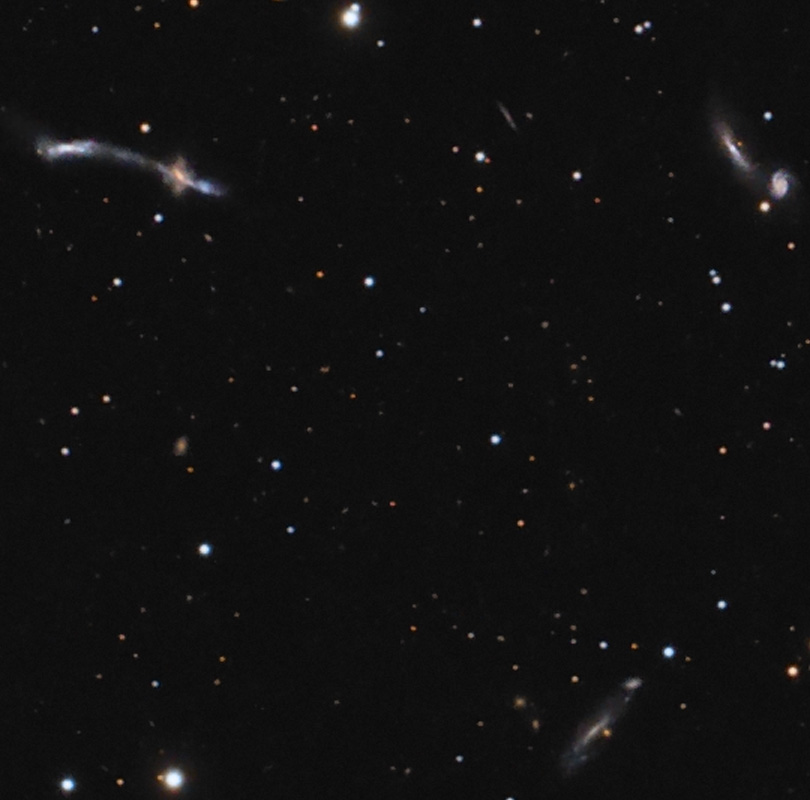 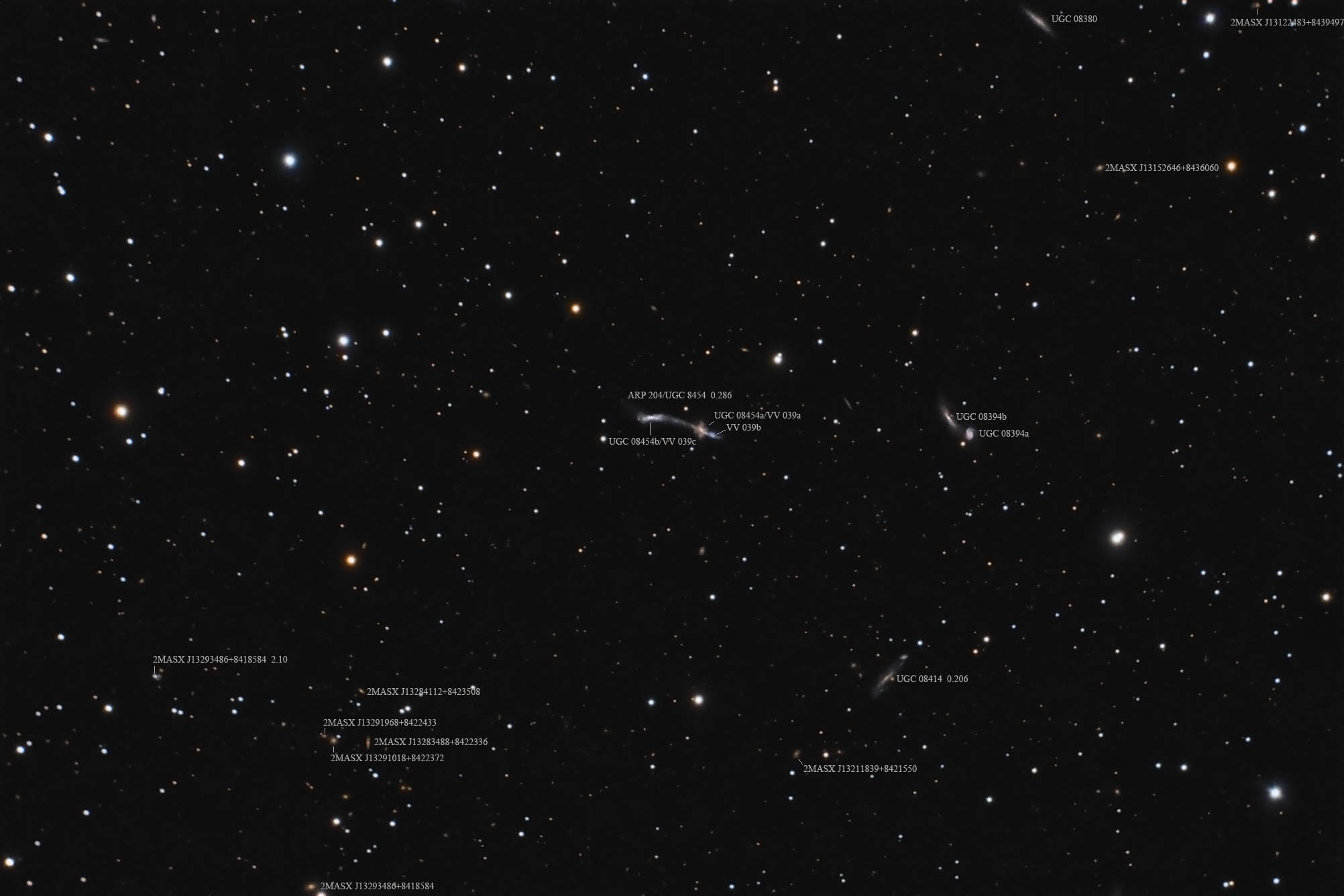