Arp 208, also known as CGCG 252-007, is a pair of interacting galaxies a bit over 400 million light-years away seen against northern Hercules. Redshift data is available only for the eastern galaxy. Arp classed this pair under: Galaxies (not classifiable as S or E), material ejected from nuclei. We now know what he was seeing were pieces tidally pulled from these galaxies rather than ejected. Individually they are cataloged as MCG+08-31-010 and MCG+08-31-011, left to right. The Kanipe-Webb book though has them reversed. While that does fit normal RA ordering it doesn\'t match any of the catalogs I consulted. There\'s no consensus on how to classify these two. Most either don\'t try or say S?. VV catalog calls both irregular. The edge on nearby is MCG+08-31-09, an Sd spiral with the same redshift as Arp 208 so a nearby member. Arp had no comment on this entry and I find little useful on it in the literature. CGCG catalog considers this a 3 galaxy system with the note: \"Triple system [with] bridges.\" I don\'t see any sign of a bridge to the edge on spiral. NED lists the western part (MCG+08-31-11) as being a rejected quasar rather than a galaxy. Gives a photometric distance of 7 billion light-years and a brightness of 20.9. That\'s very strange series of what appears to be mistakes.

The lack of information continues to the entire field. NED has no redshift or other distance data on any other galaxy in the image. I debated about an annotated image and decided to post one with names of galaxies. There\'s one Quasar in the image, PC 1650+4713. It is noted by distance in the lower left corner. I\'ve noted a few obvious galaxies that aren\'t listed in NED or the SDSS. I find this is rather common. I don\'t know why. This image was taken through a rather thick haze which created a nasty haze around many stars making them look like galaxies. Usually, the PSF of the object will give away a galaxy. Only those with no entry and a PSF that was obviously that of a galaxy are marked \"No Entry\". Most others are stars with nasty halos. The haze also limited my image to about magnitude 21.75 rather than my normal 22.5 to 23. Still, it stabilized my seeing quite a bit allowing me to reproduce this image at 0.67 seconds per pixel rather than my usual 1\" though I\'ve provided a 1\" per pixel version as well. The annotated image is at 1\" per pixel however to save bandwidth. 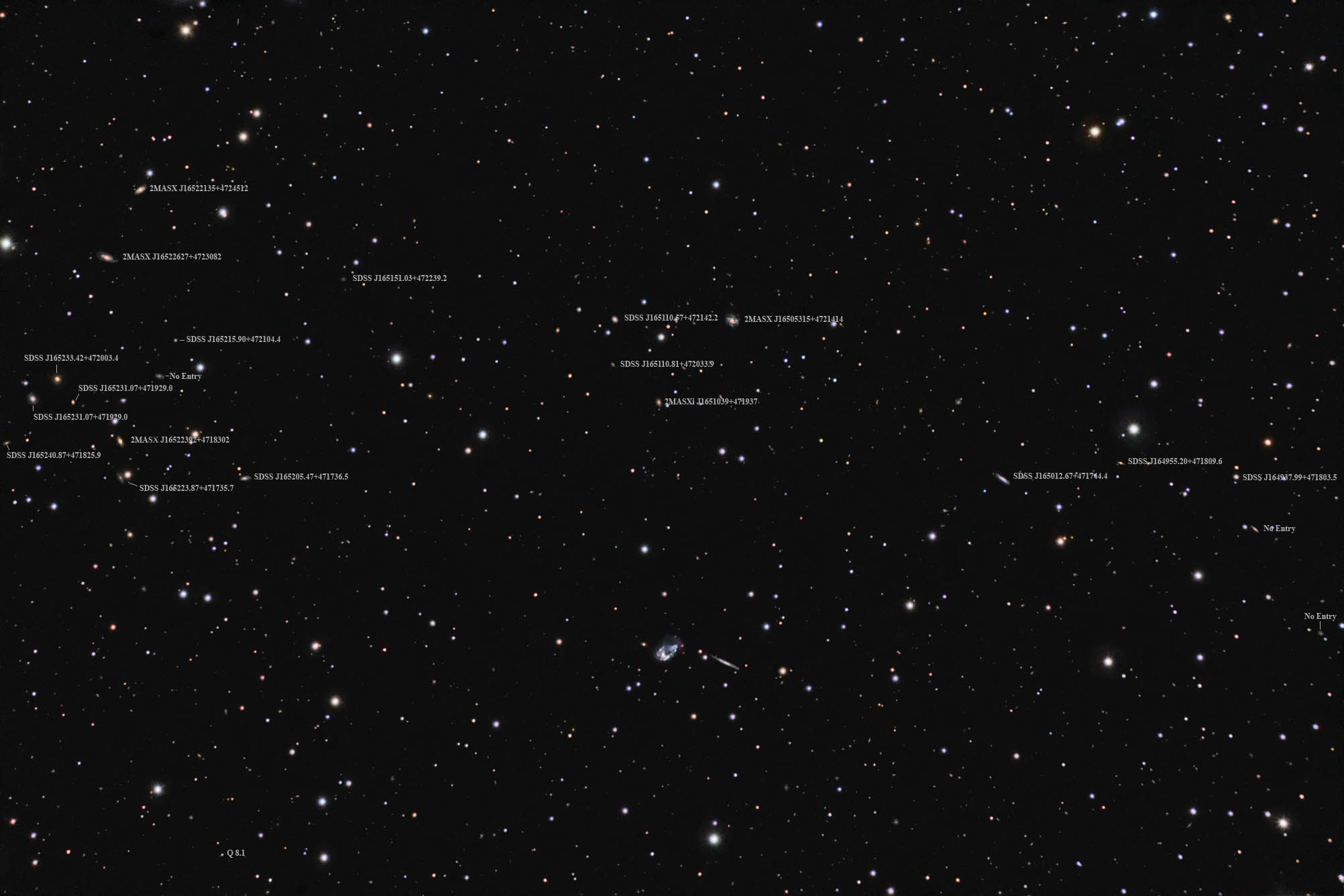 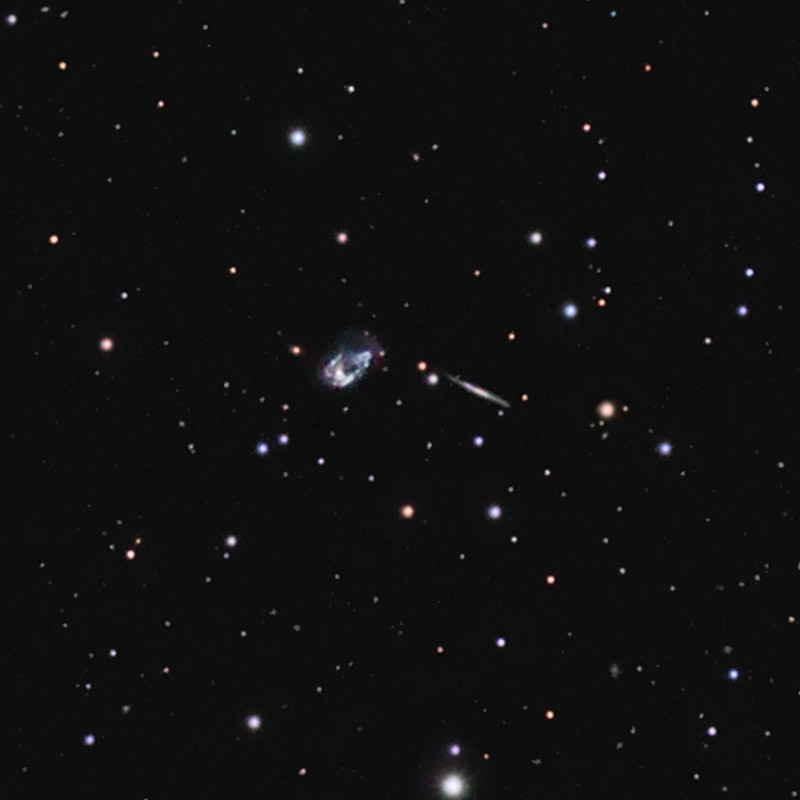 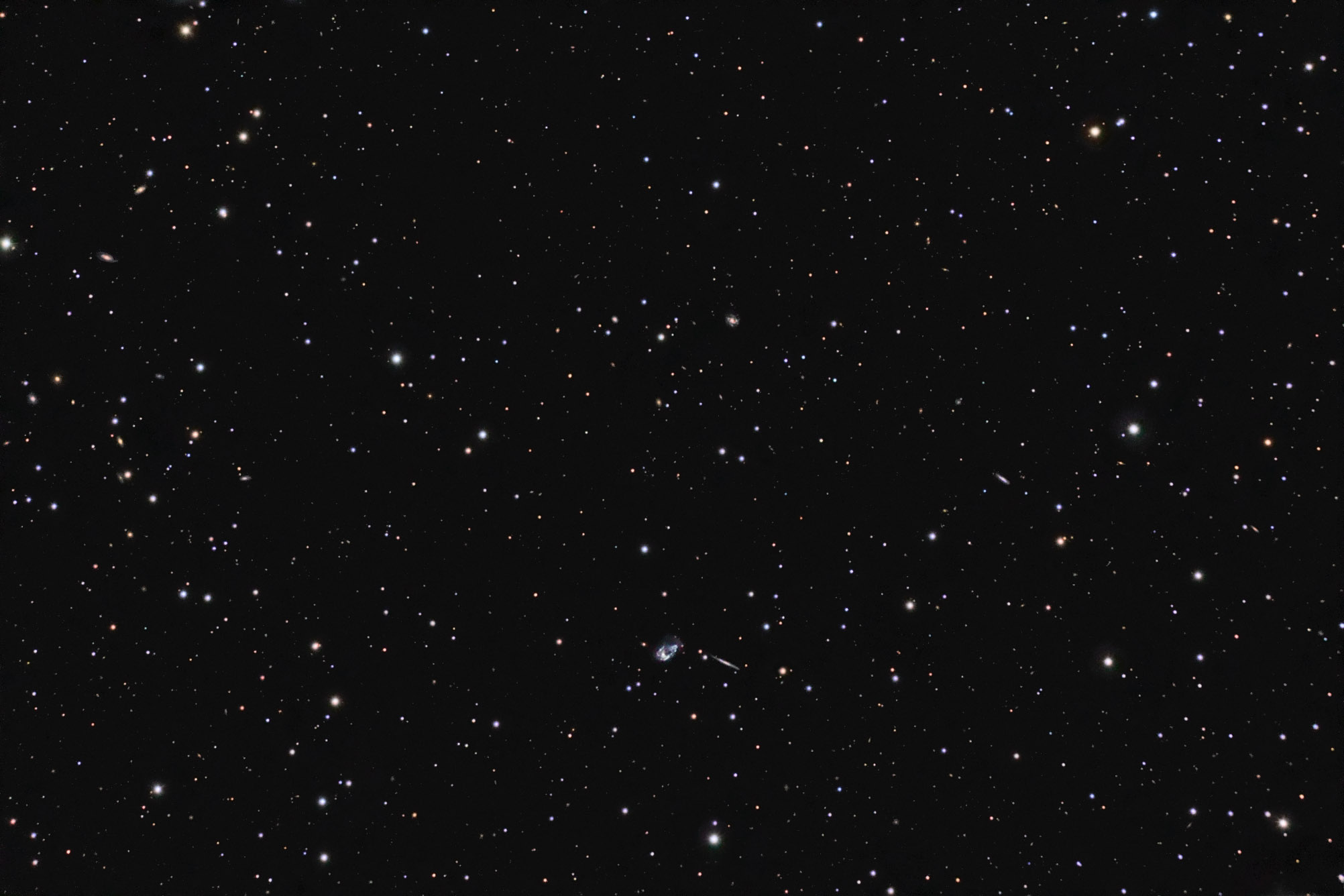