Arp 217/NGC 3310 is an example of a galactic merger. There are two cores separated by 2\" of arc. Imaging at 1\" per pixel I was unable to resolve this. A tremendous spray of stars loops and radiates from this galaxy. My 50 minutes of exposure time plus a nasty glare from a fifth magnitude star just off the top of the frame made pulling it out difficult. This galaxy is located in Ursa Major southwest of the southwest corner of the bowl of the big dipper. It is about 50 million light-years distant by redshift measurement. Other sources put it slightly further away but the differences are minor so I\'ll go with this nice round number.

It is a starburst galaxy, possibly on par with M82. Oddly few O stars are seen which is hard to explain. I was surprised by how much H alpha I picked up in the arms. These huge regions indicate star formation is going on not just in the core but along the arms as well. If O stars are in short supply how are these regions being ionized?

It is known as the Bow and Arrow Galaxy for the odd stream of young blue stars piercing a diffuse arc of stars that possibly traces the path of the merging galaxy. I\'ve also seen it called the Bowstring Galaxy though that ignores the arrow so I prefer the former. It was discovered by William Herschel on April 12, 1789, but didn\'t make either Herschel 400 observing program.

I had to place the galaxy high to move a K3 giant star out of the field. It still sent a halo of light through the upper half of the galaxy that made processing this image very difficult. I lost some of the star streams because of it.

I found some odd things while preparing the annotated image. First, a star-like object east of Arp 217 is identified as a star cluster associated with Arp 217! It is labeled *Cl. Its redshift is the same as that of Arp 217. That\'s one heck of a star cluster if that is right.

Down to the southwest of Arp 217 is an object with three entries; the primary as a star, next as an X-ray source and lastly as a galaxy. But it is listed as being 10.9 billion light years distant and is classed as an AGN (Active Galactic Nuclei). That plus the X-rays would make it a possible quasar. I added a ? to its label for this reason.

As is all too often the case I checked a galaxy that NED missed. It found some 3000 within 20 minutes of Arp 217, half fainter than any shown on my image. Yet, it missed a rather red galaxy in the lower left corner marked with a question mark. Usually these are low surface brightness blue galaxies but in this case, it is a pretty ordinary looking reddish elliptical-like galaxy.

This is a reshoot. The first time I tried imaging it the K3 star was in the field and made such a glare across the entire image it was easier to reshoot it than try to reprocess it. Still, that star nailed me. I doubt I\'ll try again. This will have to do. Even if the night\'s seeing was rather poor. 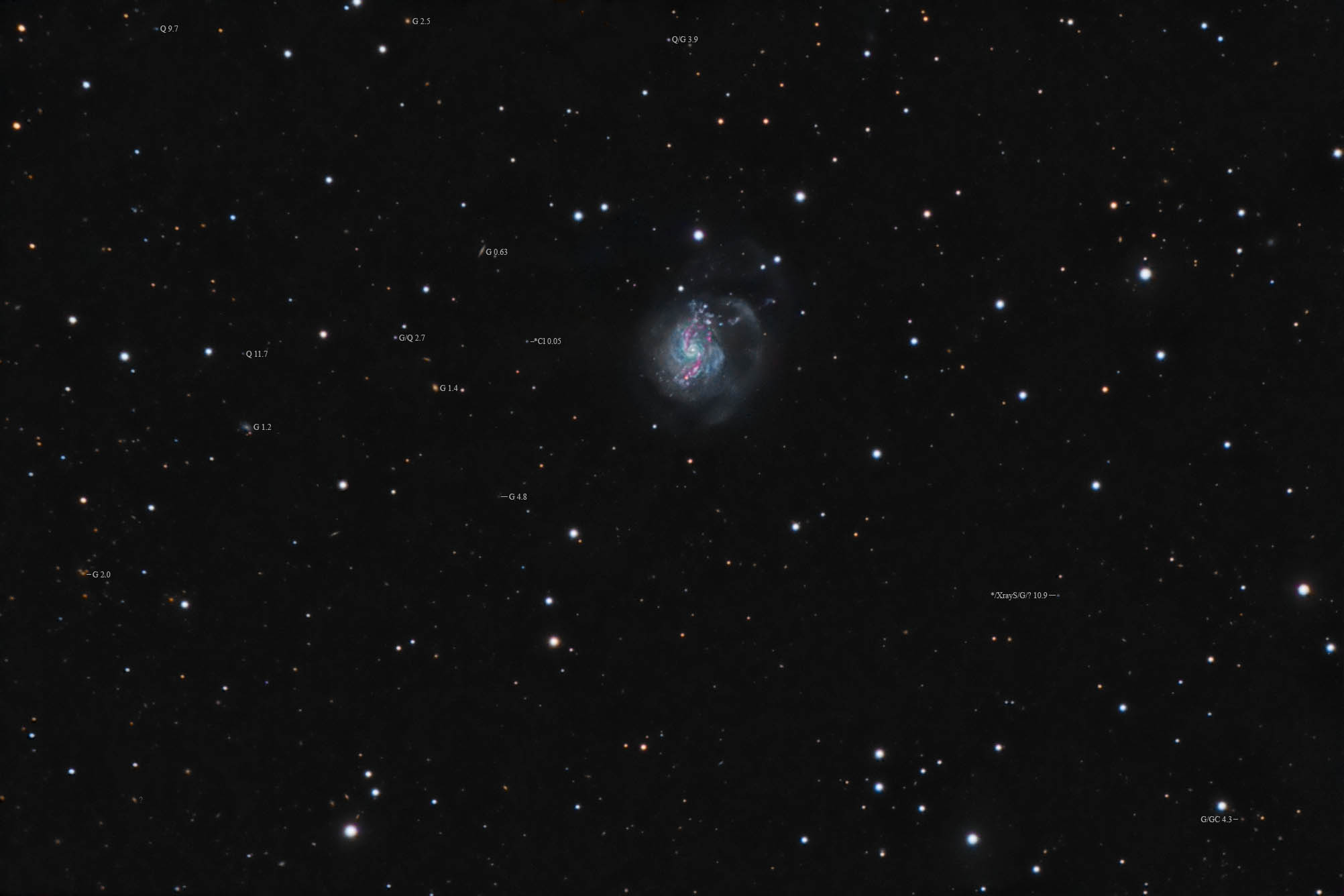 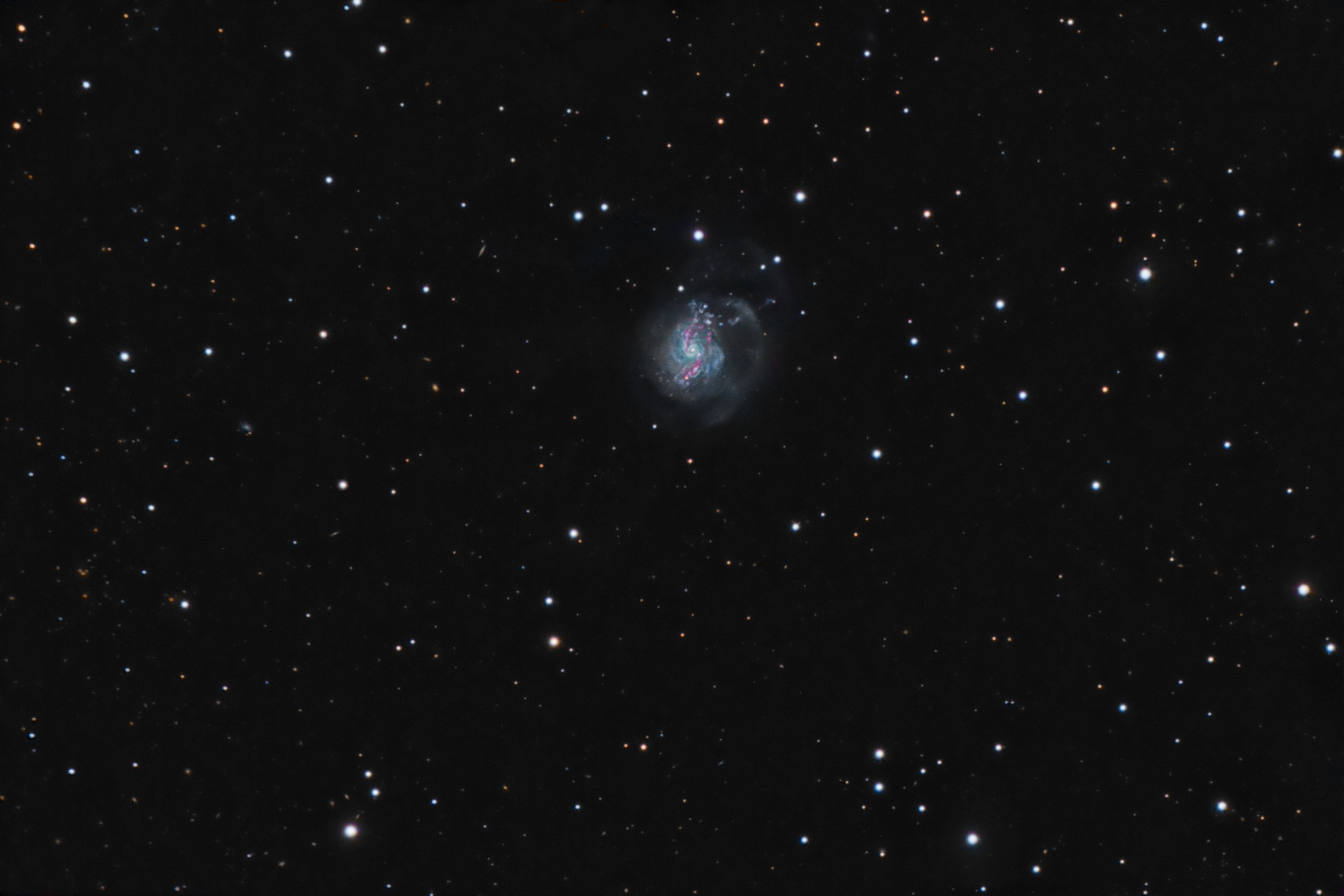 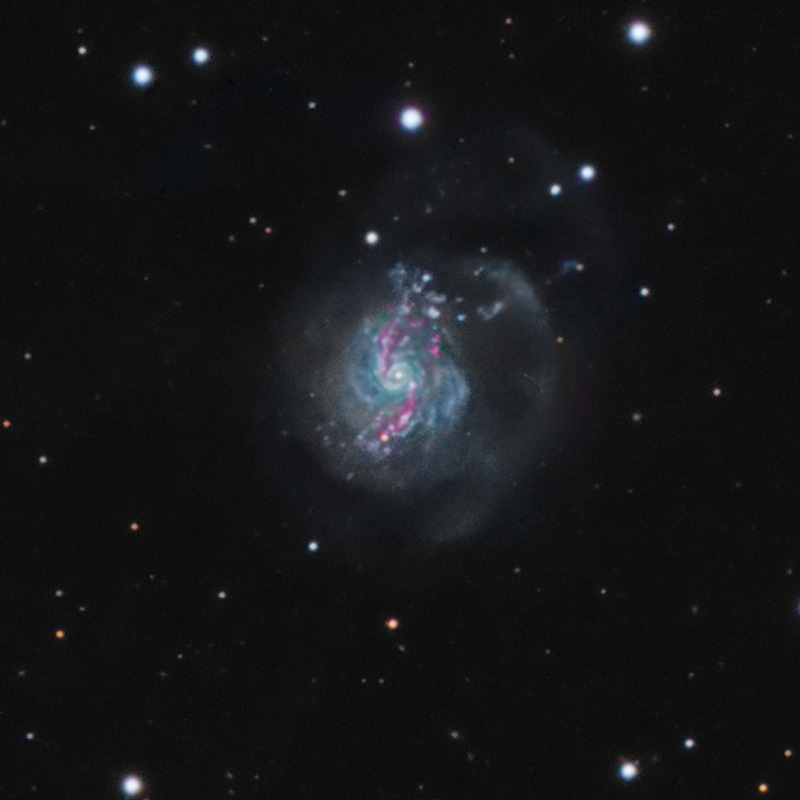