Arp 218 is located in eastern Serpens Caput not far from the famous Hercules Galaxy Cluster. It may be a member of the Hercules supercluster as one paper I did find considers it as such but provides little else. That may help account for the rather rich field of distant galaxies in the image. Unfortunately, while it is the last of the Arps I imaged it is also the least researched of those I have taken which is the vast majority of them. For instance, there are only 6 papers listed in SIMBAD, all of which are just listings mentioning it or Arp\'s catalog entry. A couple papers consider it an M51 type of interacting pair but only list it as such an example. There\'s not even any distance estimate for it that I could find. Virtually all I could find on them is shown on the annotated image. They may be members of the same group those at 650 million light-years in the image. That\'s only a guess on my part.

The eastern member has an apparently tidally distorted arm that curves back on itself making the appearance of a loop though I doubt that is really the case if seen from a different angle it likely goes far behind or in front of the galaxy rather than looping back into the galaxy\'s core. Arp put it in his class for galaxies with \"Adjacent Loops\", whatever that means. He left no note on this pair so your guess is as good as mine. Part way up the loop is a bright blue star-forming region that appears almost star-like in my image. It\'s clearly a star knot in the Sloan image I\'ve attached. Or so I thought. NED, however, lists it as a separate galaxy both with a Sloan ID and one from the new ASK catalog. Though it gives no size, magnitude or classification it does give a redshift! That puts it about 670 million light-years distant. That is 100 to 200 million light-years more distant than the various clusters making up the nearby Hercules Supercluster. For now, I\'m saying it is part of Arp 218 and not a separate galaxy.

The western member is unclassified. It has a very bright star cluster at its northeastern end. It has a rather red core and the southwest side is very blue indicating a spiral type galaxy with the NE end highly disturbed creating a super bright star cluster. I mistook it for a star on my image but the Sloan image under far higher resolution shows it to be part of the galaxy.

The annotated image details all the galaxies for which NED had distance data. There were many I\'d like to know more about but it just isn\'t available. South of Arp 218 is a pair of very small blue galaxies. The northern one appears to be a disk galaxy that is highly warped. Below and to the west is another very blue galaxy, an obvious spiral. It too appears distorted. Are they an interacting pair? It\'s unusual to see an edge on spiral that\'s as blue as this northeastern one is. Both are bluer than expected which could be due to \"recent\" star formation due to interaction.

There\'s a galaxy northeast of CGCG 107-053 that appears to have a very off-center core. But it is at a very different distance than all its apparent neighbors. How did it get so distorted?

UGC 10084, CGCG 107-053 and a couple others appear to be part of the same group as Arp 218. CGCG 107-053 is a neat, tightly wound spiral while the much closer UGC 10085 is a very interesting multi-arm with very irregular widely spread arms. I wish it was closer so we could get a better look at it. it is quite a contrast compared to the CGCG spiral.

Arp took his image of Arp 218 under very poor seeing conditions, even worse than mine allowing me to capture more detail than he could. Nice to out-shoot what was \"The World\'s Largest Telescope\" for most of my life. The idea it could happen was less believable to me than I\'d have a computer more powerful than those taking up entire floors of climate controlled buildings in the 50\'s. 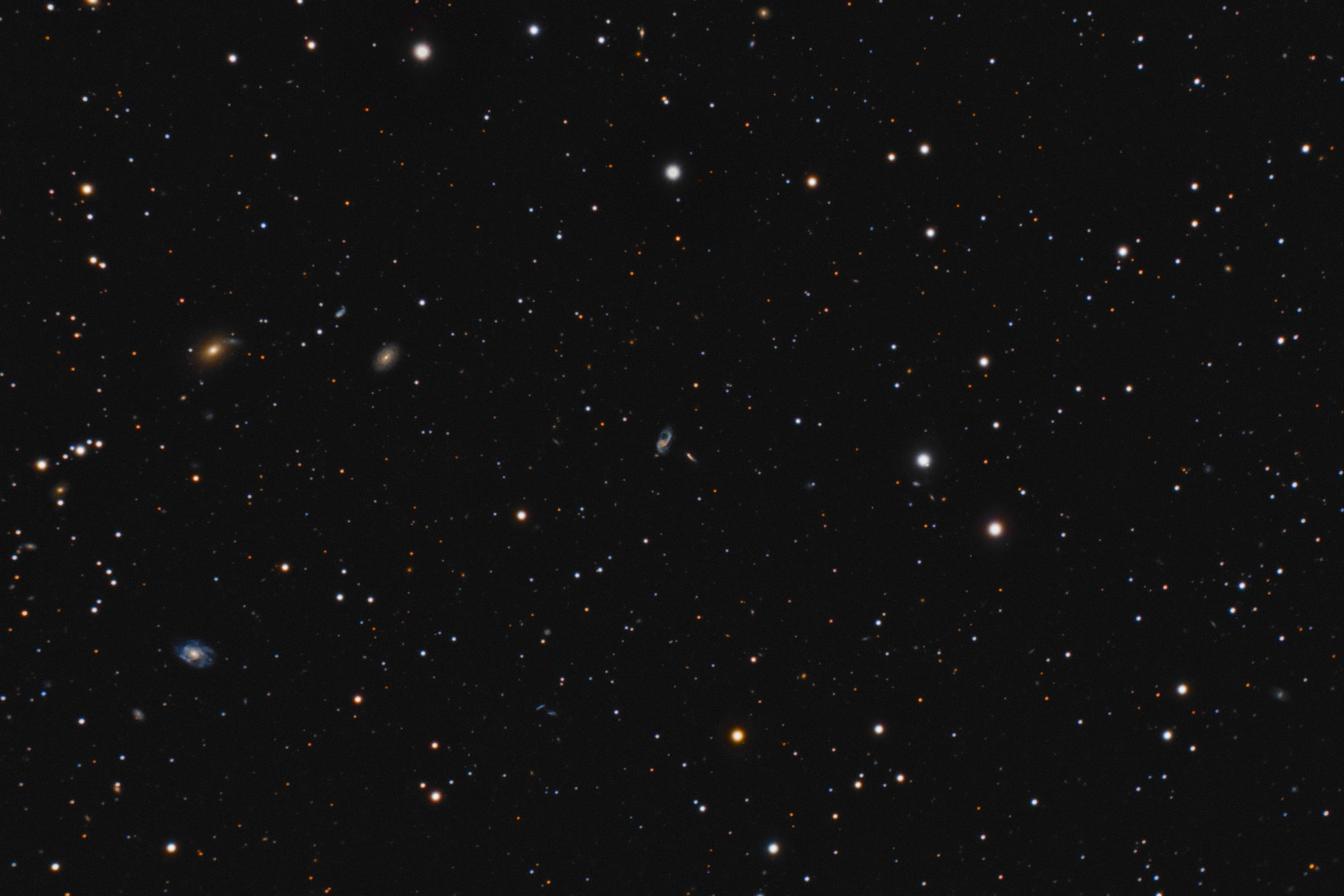 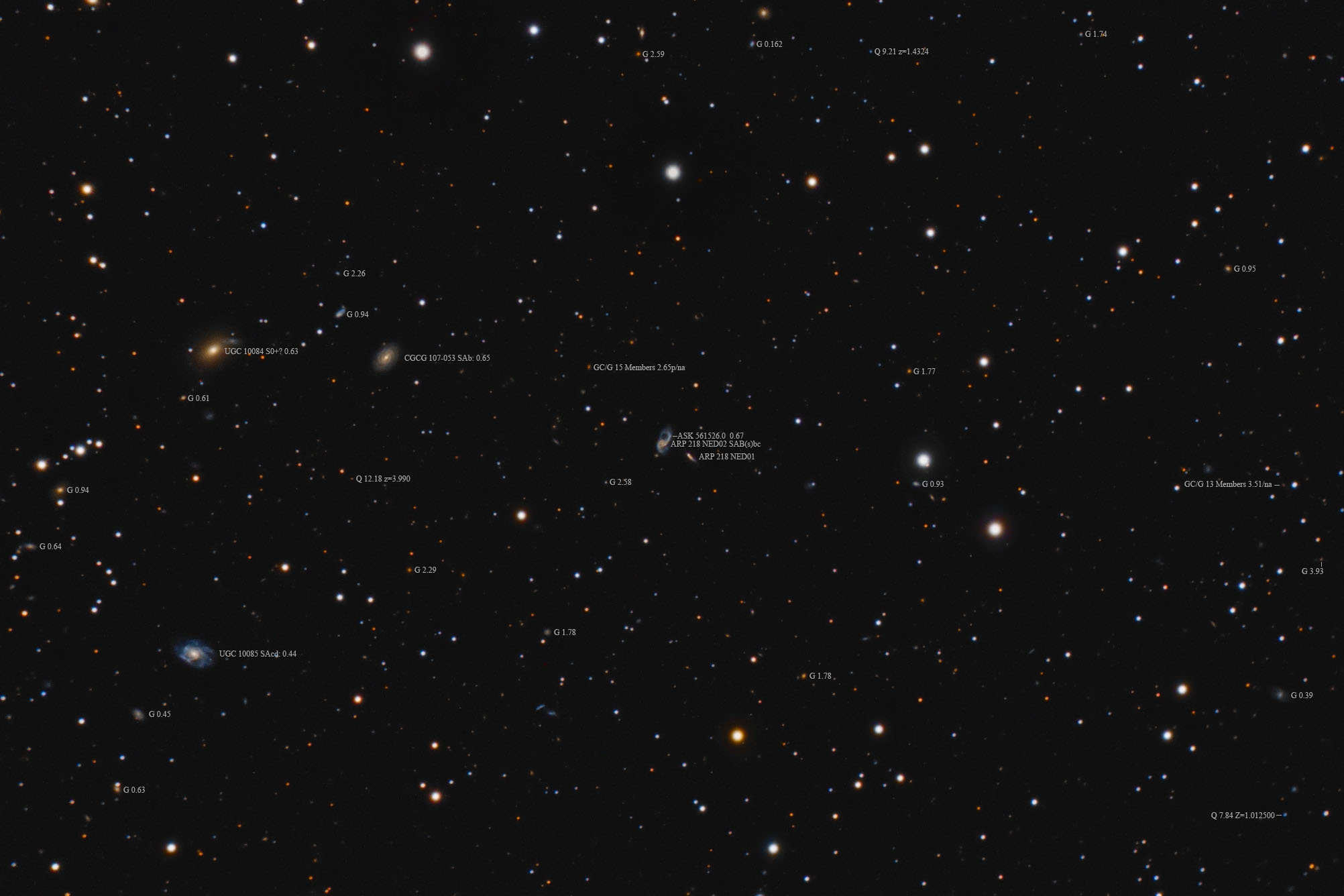