Arp 220/IC 4553 is the closest known Ultra Luminous Infra Red Galaxy (ULIRG) known and one of the brightest. Though all this was unknown at the time of Arp\'s atlas. This was discovered initially by the IRAS satellite. A press conference to announce these objects that the scientists didn\'t realize were galaxies at the time has been used by, first the believers of the 2003 Zeta/planet X end of the world and then by the 12/21/2012 end of the world believers of \"planet Nibiru\" to \"prove\" this mythical planet exists. If it wasn\'t this galaxy that caused the furor it was one like it. I was a supervisor of a public observatory back when the Zeta fiasco happened and was reviled by some for not showing them this non-existent planet. I don\'t miss those days.

Arp puts this one in his class \"galaxies with adjacent loops\". While this one is one of the most studied of all Arp galaxies he had no comment on it. It is located in Serpens Caput about 250 million light-years away. NED classes it as S?. It has LINER and Seyfert 2 characteristics.

At one time it was thought that visually we were seeing two galaxies not quite yet in contact. Then it was realized the \"gap\" was a dust lane and we see only one galaxy. Radio telescopes and then IR telescopes showed it had two cores hidden behind the dust that are only 0.9\" of arc apart. It really is two after all. Since it shows somewhat contrary signs of being an AGN and being a starburst galaxy some think this is due to one galaxy harboring a very active AGN and the other having strong starburst activity. One paper suggests that the two massive black holes will merge in a billion years or less. Appears I\'ll miss that event if it happens. Another galaxy at the same distance as Arp 220 is on the eastern edge of my image.

The annotated image shows a large number of galaxies all with the same redshift that puts them at 1.2 billion light-years. I found no reference to a cluster, however. One galaxy is at 1.3 billion light-years. Due to rounding to 2 significant figures there is nearly a 120 million light-year difference in their distances so it isn\'t likely related.

I had great difficulty imaging this one. I started in April of 2010 and tried many nights through until the last subs were taken on June 18. Out of all that I got only 2 good luminance frames and two badly hurt by clouds which bloated the brightest stars, especially the one to the northwest of Arp 220. But the high clouds settled seeing so those were the sharpest. In order to get enough signal for a decent image I used the 11 RGB images (one blue was lost to clouds) and stacked them with the 4 luminance frames I used to make a pseudo luminance image. This worked better than I expected, resulting in a far better image than I expected to be able to put together. Just ignore the bloated brighter stars the clouds gave me. Also due to most images being heavily filtered by clouds and RGB filters this one doesn\'t go as deep as normal. It barely reaches magnitude 21 instead of the 22.5 I commonly reach. I\'ve been trying again this year but so far the clouds have said no way. I decided to try processing what I had and am happy with the results so likely won\'t put it on the reshoot list.

Since this one is so highly studied I have other images to refer.

A radio image showing the two cores can be found in figure 12 and 13 of this paper
http://articles.adsabs.harvard.edu/cgi-bin/nph-iarticle_query?1996ApJ...465..191M&data_type=PDF_HIGH&whole_paper=YES&type=PRINTER&filetype=.pdf

Kitt Peak image with the 2.1-meter telescope in near IR and H alpha (my image suddenly doesn\'t appear so bad)
http://www.astr.ua.edu/gifimages/arp220.html 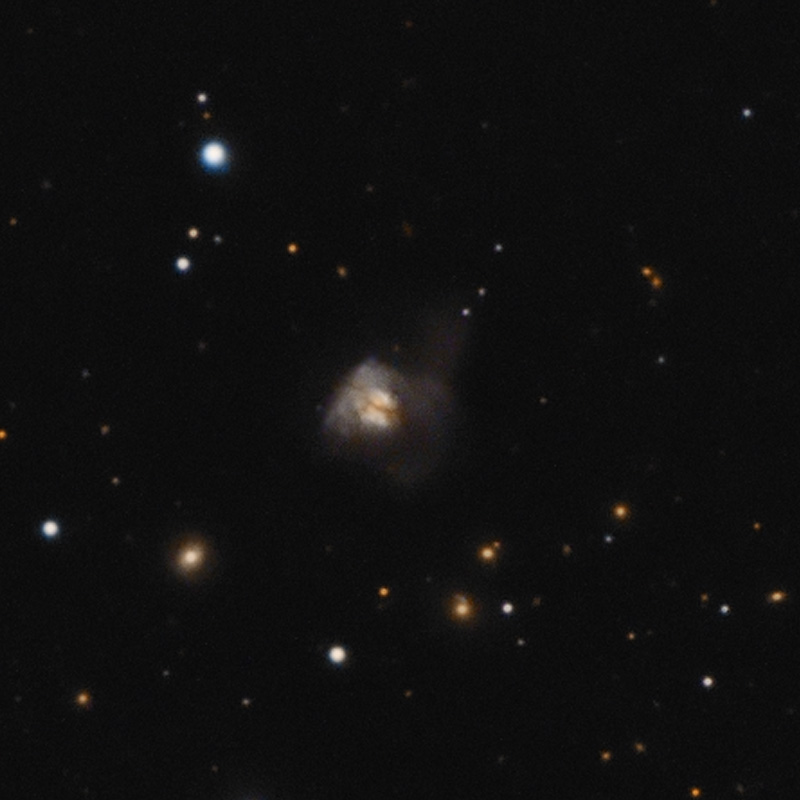 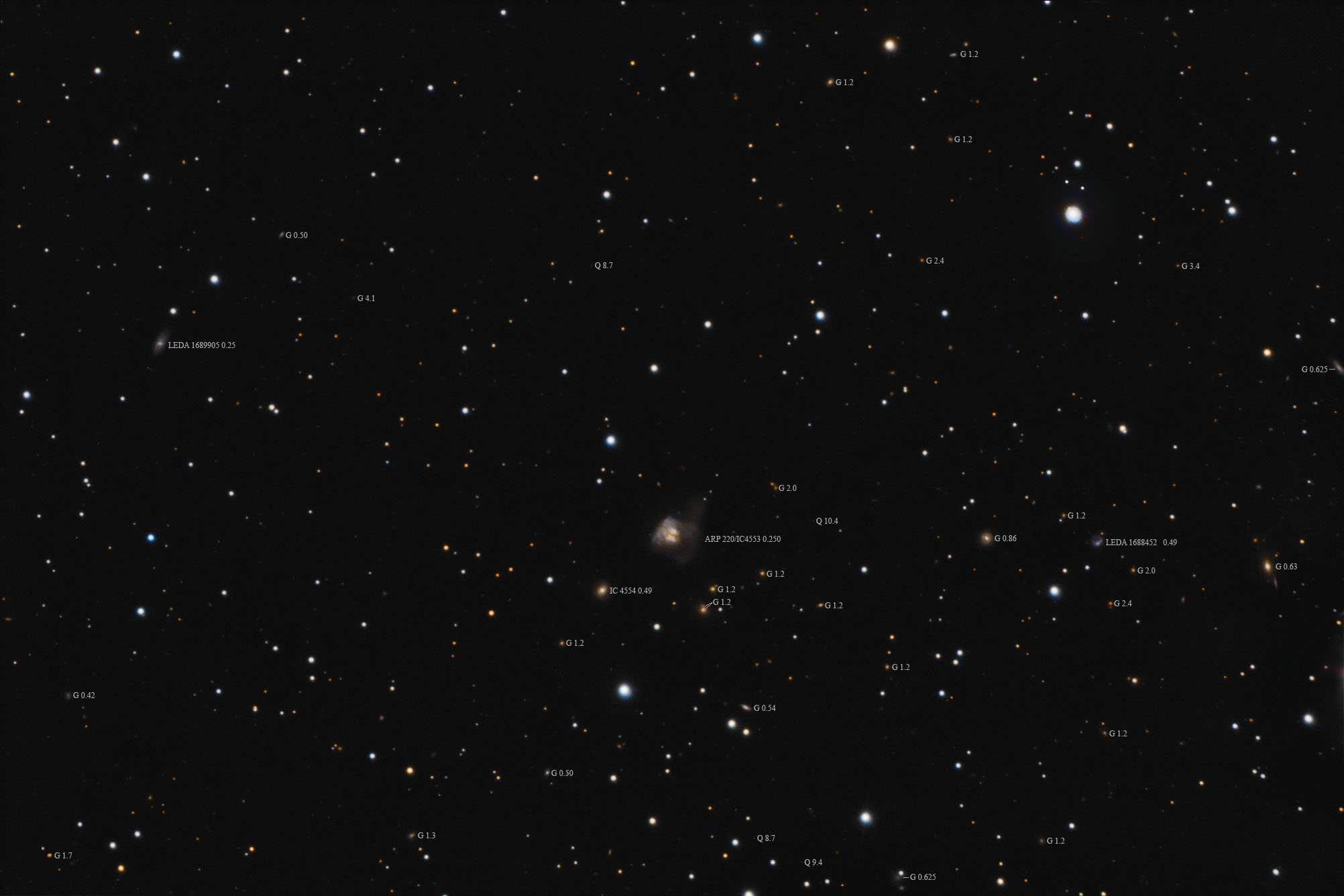 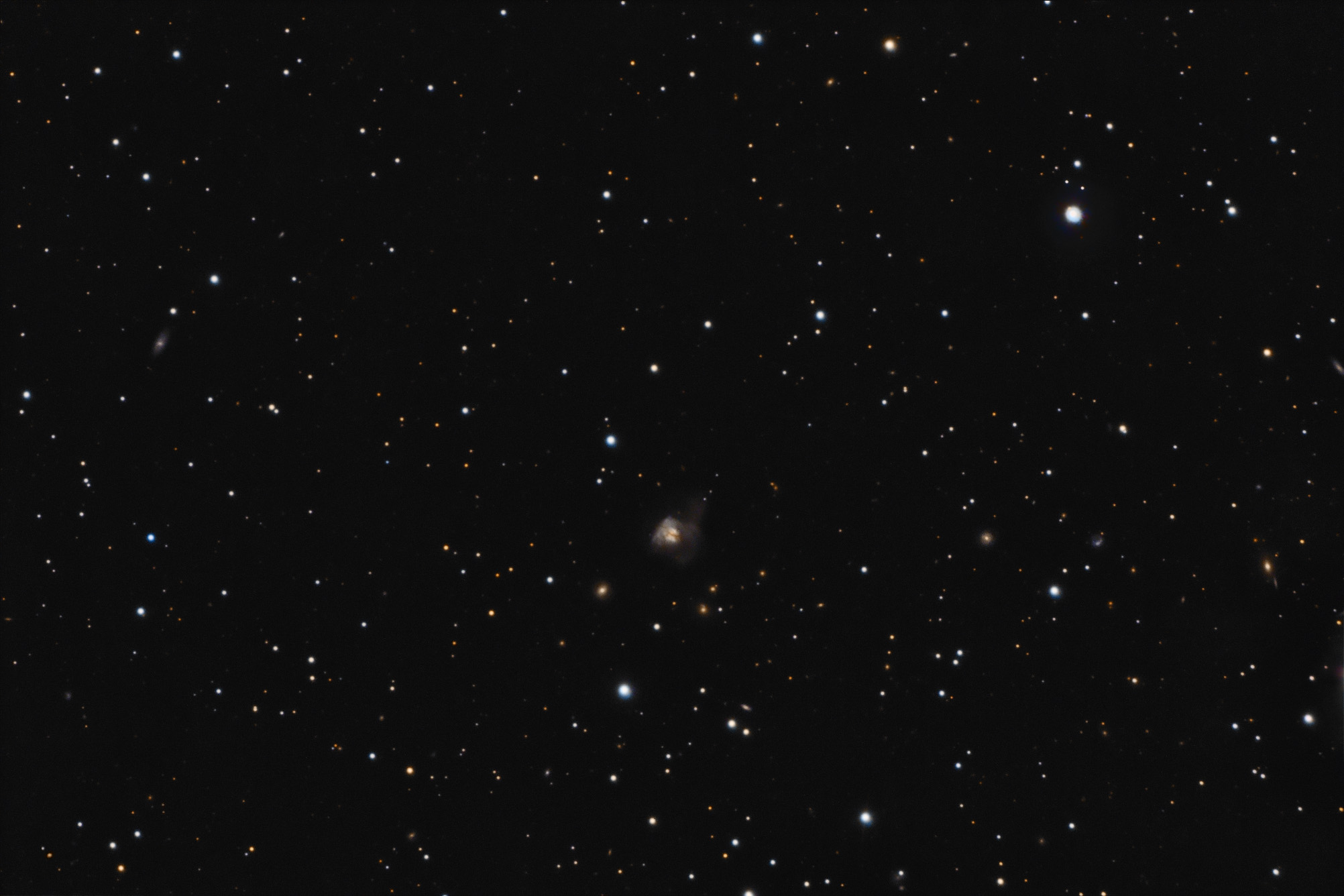