ARP 221 is a triple galaxy in Hydra about 3.5 degrees southeast of Alphard, Hydra\'s lone 2nd magnitude star. Arp classified it as a galaxy with amorphous spiral arms making the comment: \"Faint diffuse material to south, bright filament to hard image on NW side of nucleus.\" Sounds awkward but is the way he wrote it. Apparently, he was ignoring the two close companions though NED and others consider all three part of Arp 221. All three have the same redshift putting them 260 million light-years from us. It appears rather obvious the main galaxy has been highly disturbed causing the tidal plumes Arp called amorphous arms. NED classifies it as I0 Pec. It may have been a spiral. Is it interacting with one or both of its close companions or is it the result of a merger. I found nothing on it to help decide this question. The south end of the halo has a sharp, well-defined edge looking like a shell. These are usually a sign of a merger so I\'m leaning in that direction. Also one or both of the \"arms\" (especially the on the NW side) may be the remains of its dinner showing the path it followed while being ripped apart. Another reason I favor the merger option.

Several other galaxies much further distant from ARP 221 show virtually the same redshift distance indicating this is a group of galaxies but I found no cluster or galaxy group cataloged for this position. Unfortunately, this part of the sky is poorly studied. What few galaxies had redshift data are shown in the annotated image. The largest dimension of its halo measures some 2 minutes across in my data. That makes the galaxy, including plumes, about 150,000 light-years across.

I had thought I\'d taken all Arp galaxies north of 15 degrees south, my normal limit unless the night is extraordinarily good. But over a year ago a sweep of the hard drive showed me I had missed two. Well, I\'d tried them several times but seeing and clouds were too much. Apparently, I thought I had good enough data and removed them from my to-do list. Then when I found they weren\'t worth processing never put them back on the list. I fixed that last year but weather and bad seeing continued resulting in more failures. This year I\'ve been trying again with similar results. Finally one night I just had time to catch this one under good seeing for its -11 degree declination. But it entered my Meridian Tree ruining the second green frame. The first had a horribly bright satellite across the top of the frame. Cloning and the Hasta La Vista Green filter made for a successful repair.

I\'ve included in the annotated image a few that had no redshift data. Those that only had coordinates for their \"name\" were found in either the 2MASS IR survey or the Galex Ultraviolet survey so carry the designation of IrS or UvS. One was in both so has both marking it. Many weren\'t in NED at all. One that appears part of a pair of contrasting colors fell into that hole and is noted by a question mark even though it was much brighter than many that were in NED. Without redshift nor names other than their position I didn\'t annotate the vast majority in the image.

The minor planet center showed an asteroid in the frame I should have picked up but didn\'t. That puzzled me until a few weeks later when I checked again and now it was listed as lost. So the coordinates I had were wrong.

Arp\'s image of this one with the 200\" Palomar scope can be found at:
http://ned.ipac.caltech.edu/level5/Arp/Figures/big_arp221.jpeg
For once he put north at the top same as I have it. 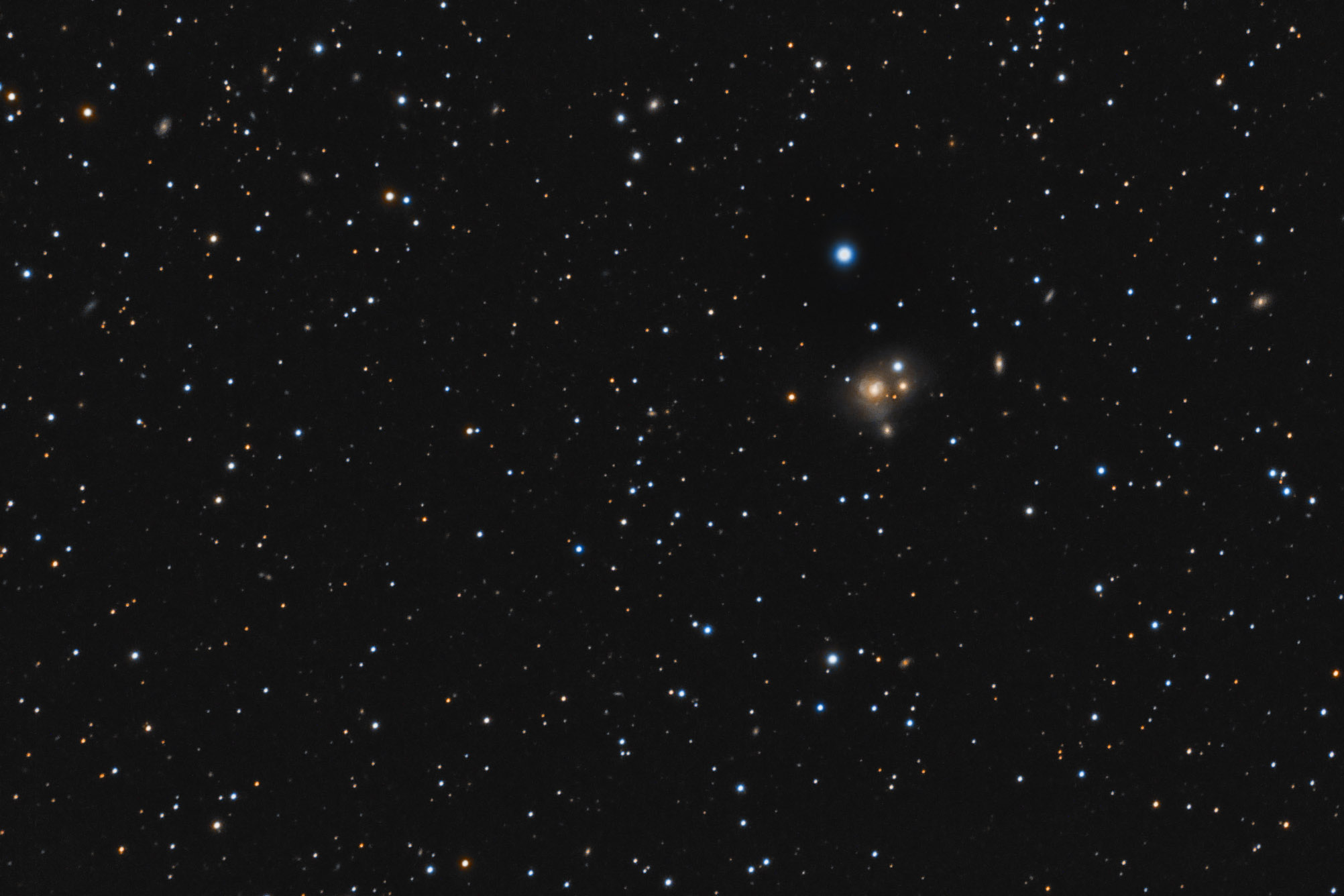 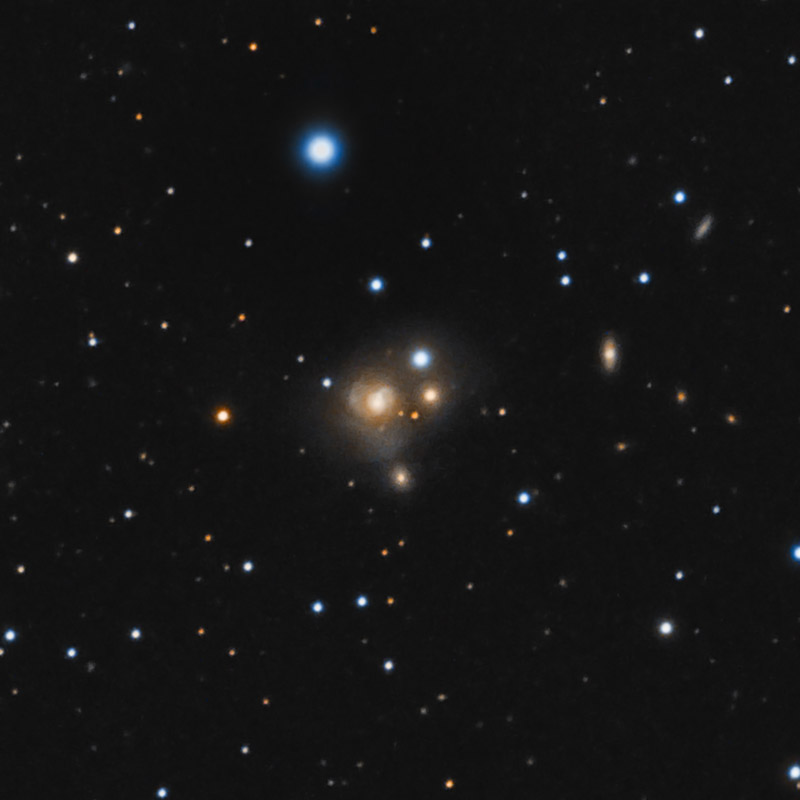 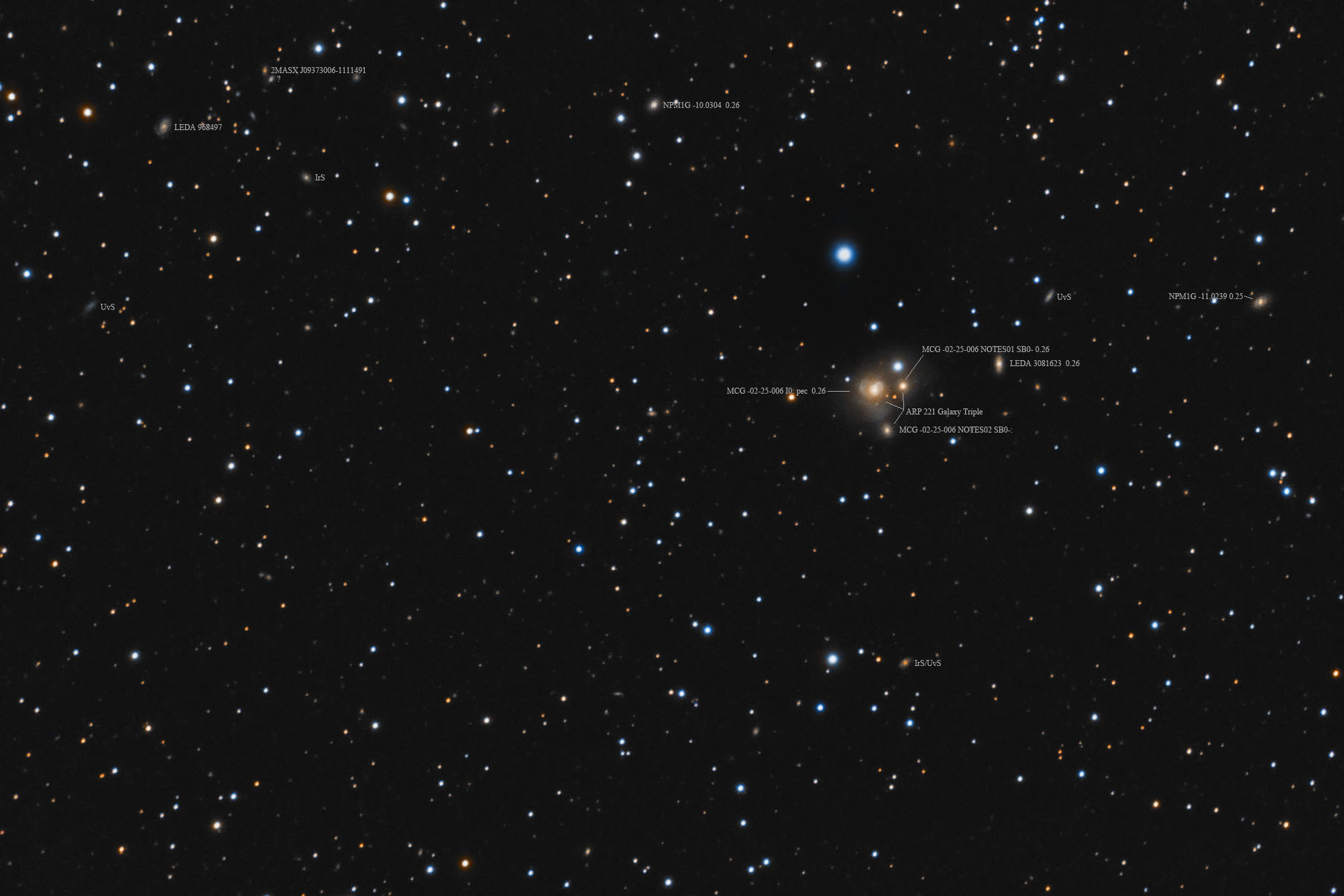