Arp 223 is entered in his catalog under amorphous spiral arms. It is also known as NGC 7585 and is in the constellation of Aquarius just below the Circlet of Pisces. Redshift puts it at about 145 million light-years away. Most sources say it is the result of a merger of two galaxies but do admit they find no hint of the second galaxy saying it must have been some time ago and it is now fully absorbed. They note the presence of NGC 7576 10.7 minutes to the southwest (also in my image) but dismiss it has being too far away. But again admitting that it too is about 145 million light-years distant with virtually the same redshift as Arp 223. It is a ring galaxy which often is the result of an encounter. Neither shows any tidal streamer that you\'d expect from an encounter so probably the experts are right, still, I have to wonder a bit. But see its near-twin Arp 222.

I screwed up taking this one. I\'ve had NGC 7592, a triple interacting Arp \"wanna-be\" galaxy on my to-do list for several years. It is just 15 minutes north of Arp 223. Somehow in my muddled middle of the night brain (cloud alarm woke me at 1 a.m. to say the sky has cleared get imaging), I thought I needed to put it high in the field to pick up NGC 7592 but it should have been low! ARGH. I could have captured all three if my brain had been working on even half its neurons. As of this writing, I\'m yet to capture NGC 7592.

I did catch 4 asteroids in the image. In the upper left corner partly out of frame is (8943) Stefanozavka at magnitude 18.4, slightly to its west is 2005 SK58 at magnitude 19.3. Down near the lower left corner is 2000 AY204 at magnitude 17.6. Toward the lower right corner, under NGC 7576 is (14021) 1994 PL20 at magnitude 18.3. Magnitudes are estimates by the minor planet center and can be off quite a bit it seems. You may wonder why the second asteroid has no number. Asteroids get a number only after their orbit is fully determined. This usually takes at least one full orbit. That hasn\'t yet happened for 2005 SK58. There is a bright streak through a star near the top of the frame, left of center. The streak was caused by a tiny speck of dirt on a filter that happened to exactly hit the star\'s position.

Several catalogs list an 18.7 magnitude quasar just southwest of Arp 223 a bit over about 1.4 minutes away and just on the edge of the galaxy as seen in my image. Since I easily picked up a 19th magnitude moving asteroid an 18.7 magnitude quasar should be very obvious. I don\'t see it, nor do I see it in Arp\'s image of the galaxy. Either it is much fainter than listed or the position is wrong. It\'s [VCV2001] J231758.8-043954 and yes the coordinates in its name match the position where I don\'t see it, just about 10\" NE of a tight unequal double star. But the position has an error bar of 100 seconds of arc so it could be anything within 100\" of that position. While I checked every star none measured 18.7. Closest is one of 19.3 directly south of the galaxy core. Why it\'s position is so uncertain I don\'t know.

This field is too close to the Milky Way\'s dust (Zone of Avoidance) so not covered by the SDSS. This means there\'s little information on this entire field. Only one other object has a redshift given (besides the lost quasar). It is a small galaxy nearly 10 minutes west and slightly north of Arp 223. It is just beside a dim star to its upper right. It is listed at 2.1 billion light years. So while there is a paucity of galaxies compared to my normal posts that isn\'t Because I\'m not going as deep, they just aren\'t there. 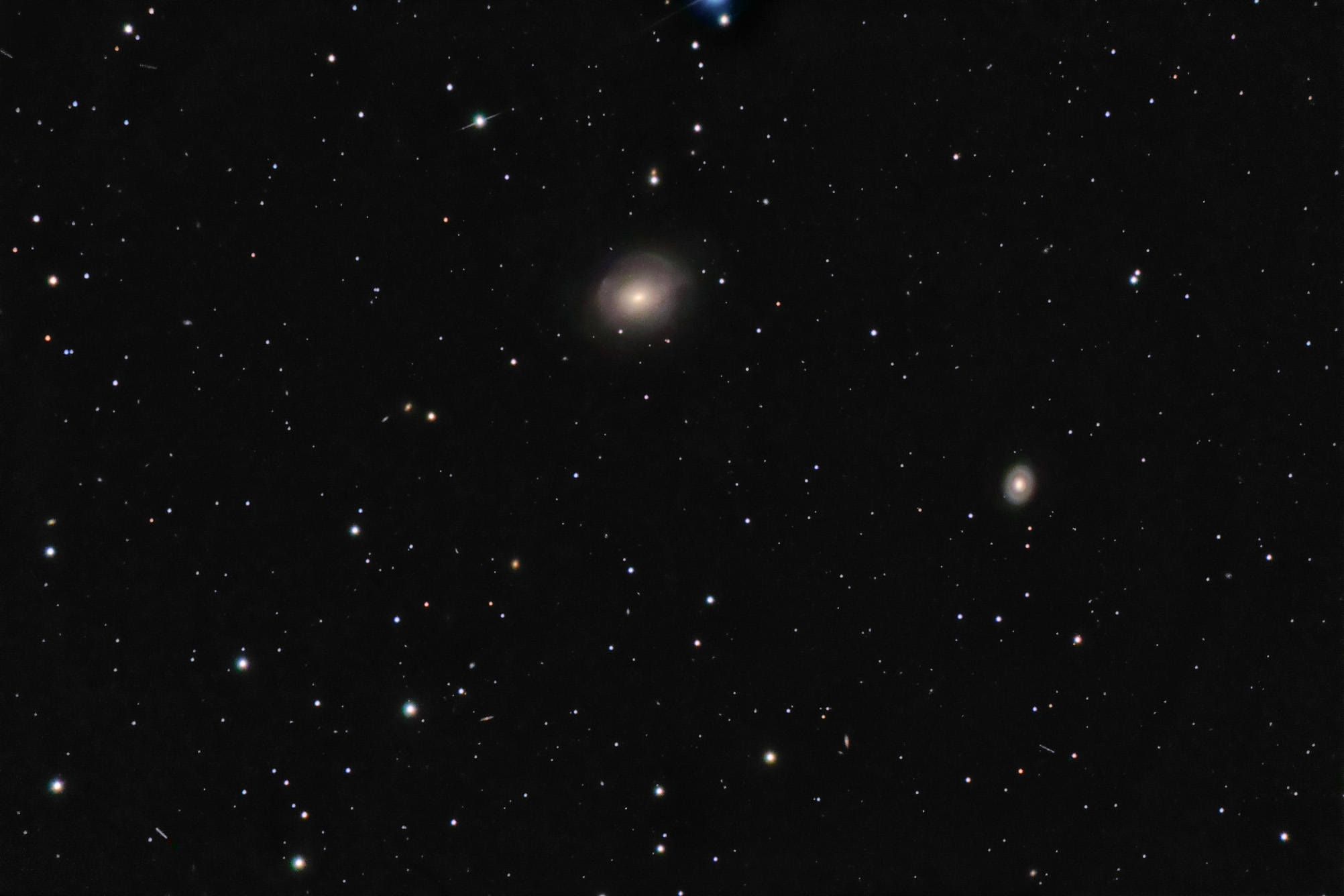