Arp 226/NGC 7252 is often known as the \"Atoms for Peace\" galaxy. It is considered to be a galaxy merger. It is about 200 to 220 million light-years away (depending on who you read -- 200 by redshift) and is located in the constellation of Aquarius, right along its southern border at -24 degrees. This puts it way too low for me to image. Over the lake atmospheric extinction is almost 2 magnitudes this low and I get severe chromatic smearing. Blue is weak that low as well making obtaining color data difficult. My color balance is very questionable this low as conditions change greatly between the time I take G2V calibration star and the image is complete. Doesn\'t help such stars aren\'t at that elevation. Higher up this is easy to but this low the standard formulas don\'t apply due to the humidity from the lake. I usually avoid going this low but as this is a famous galaxy, I had to give it a try. Many tries, that is. I started in July and finished in October with over 100 frames taken. The vast majority were too distorted, fuzzy, faint or otherwise unusable. This was a nightmare to piece together and far lower resolution than I\'d like but considering how low it was it\'s about as good as I can hope to do. I had to use all the tricks in my bag to turn the streaks in the L frame to sort of round stars. Pure RGB would be better but didn\'t begin to have the frames for it.

The galaxy is classed as (r)SA(r)0 at NED and SB0 at the NGC project. It was discovered by William Herschel on October 26, 1785 but is in neither of the Herschel 400 observing programs.

For a good ground based image of it see:
http://cseligman.com/text/atlas/ngc7252.jpg

I can\'t see much resemblance to the \"Atoms for Peace\" stamp it got its name from but you can try here:
http://en.wikipedia.org/wiki/Atoms_for_Peace

It is a famous merger featured in the classic paper by Toomre on determining the sequence with time in galaxy mergers. You can read more on that here:
http://astronomy.swin.edu.au/cms/astro/cosmos/t/Toomre+Sequence

The Hubble Space Telescope shows that its core is a rather normal looking spiral galaxy with no hint of the other galaxy. Was it completely torn apart leaving the looping star trail and plumes?
http://www.spacetelescope.org/static/archives/images/large/opo9311a.jpg

At the bottom of my image, a bit right of center,+ is the galaxy 2dFGRS S063Z192 at 800 million light-years. It appears as 2 galaxies in my image. NED\'s position is the dark gap between them. Each appears nearly circular but NED shows the galaxy as 2.8 times longer than high. This fits the size and shape of both round blobs. I still think it is two galaxies but my resolution is too poor to say for sure.

Toward the end of the northwest plume is a blue object. NED calls it NGC 7252W and gives it the designation of \"galaxy\". Is it really one or a star cloud in the plume? The HST image doesn\'t include it. It does have a similar redshift to Arp 226. To the northeast is the obvious separate barred galaxy NED calls NGC 7252 COM01. It too has a similar redshift as does 2dFGRS S063Z143, a small dwarf galaxy to the east of Arp 226.

Due to the severe extinction, I get this low over the lake the image loses about 2 magnitudes over my normal images. Chromatic dispersion elongates the stars as well. It needs many hours of exposure but this low I get only an hour a night and that only when seeing is very good. This makes it impossible for me to get the time needed. After 5 months this is all I could get.

There are three asteroids in the image. Since the 4 images used for the L image were all taken different nights, only one of which contained the asteroid, I had to \"adjust\" the image to show them. I used the 4 frames taken the night these three were in the image only for the asteroids. I had to adjust for varying focus as well. Other asteroids were in the other three frames used for the luminance image but they only appeared in one frame so a complete 40 minute track didn\'t exist, they were arbitrarily cloned out of existence. Nearest Arp 226 was (259764) 2004 BY4 at magnitude 19.3. Next closest to the southwest was (248913) 2006 VQ80 at magnitude 18.5. At the very top near the middle was (39603) 1993 TU20. It is listed as also magnitude 18.5 but obviously was far fainter. The images used for these 3 asteroids was taken on August 12, 2010 centered on about 6:10 UT. None of the frames were used for Arp 226 or anything else. I should have just ignored them but I like including the trails. 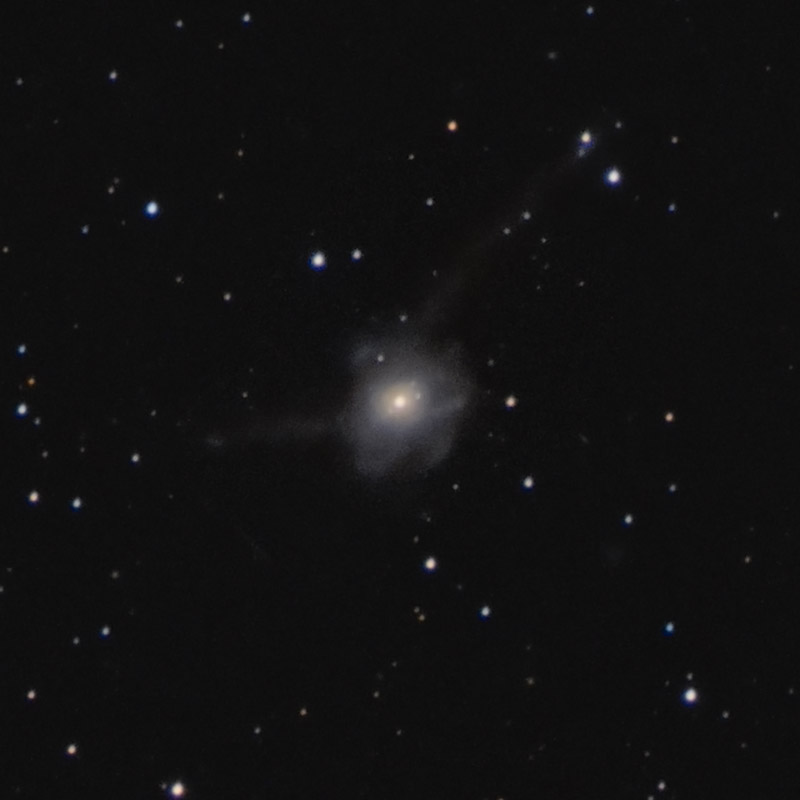 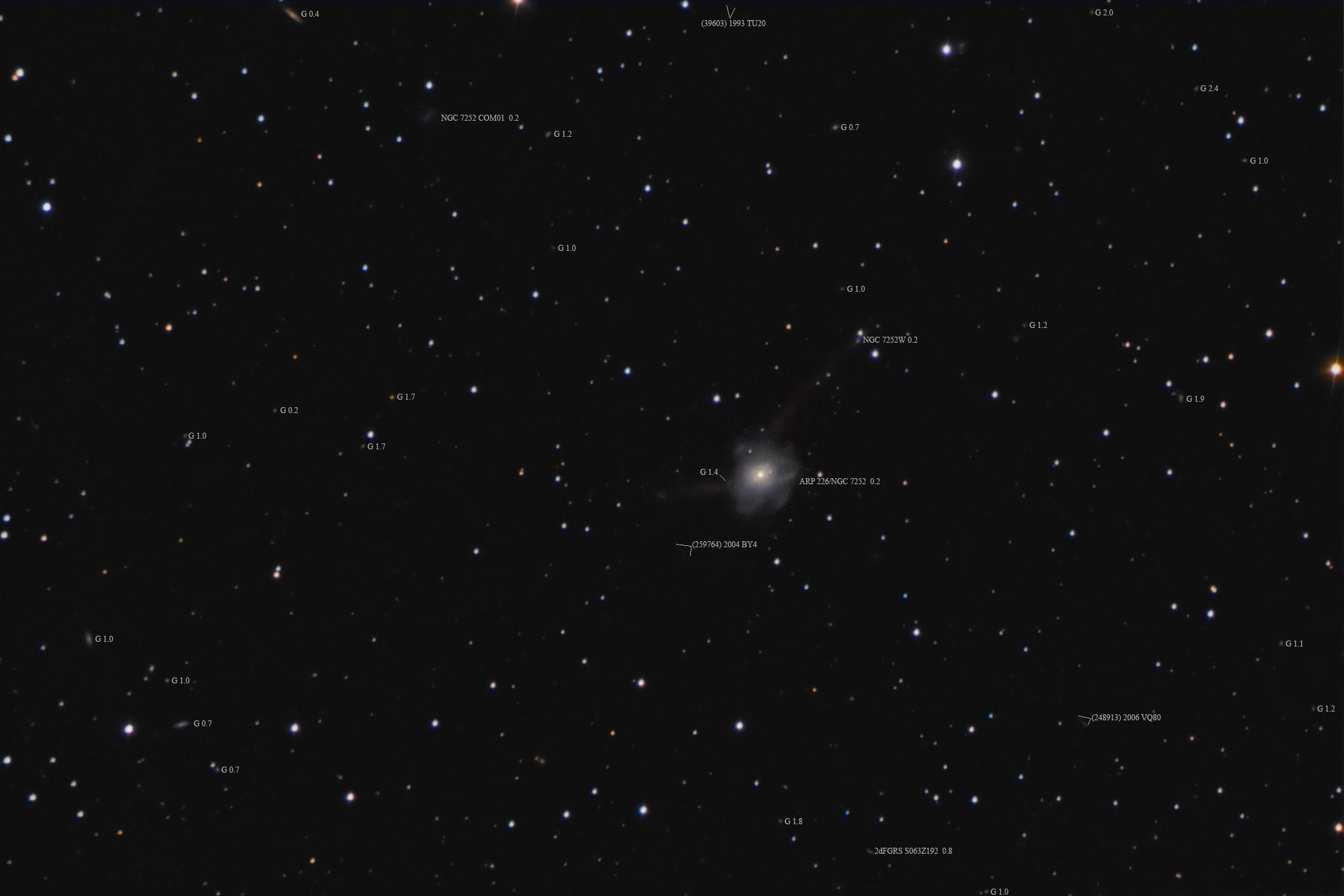 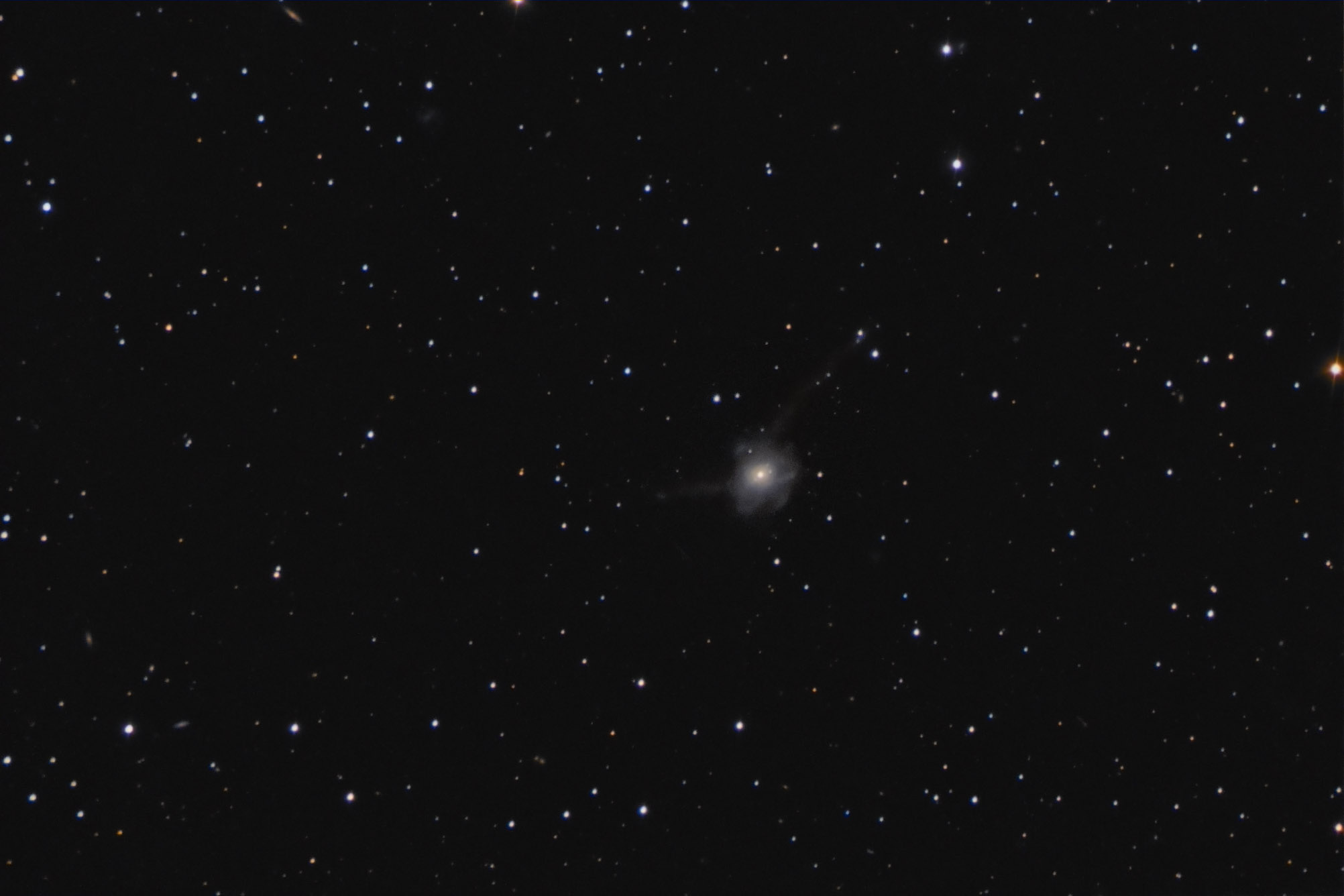 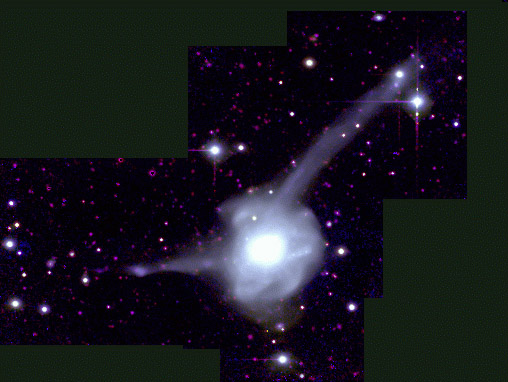