Arp 231 is a peculiar galaxy system in northwestern Cetus about 250 million light-years away. Arp put it in his category: Concentric Ring Galaxies. Often his categories had little to do with what was going on, rather they were just an attempt to categorize by appearance. Often a category would contain galaxies of very different natures that just happened to look the same. That isn\'t so much the case with his concentric ring category. These are thought to be caused by the interaction of two or more galaxies. Sharp rings as in this case coming when a small, dense gas-poor galaxy merges with a much larger one with warm dust and gas. Arp 231 appears to be such a system. For a paper showing how such galaxies are created see: http://articles.adsabs.harvard.edu/cgi-bin/nph-iarticle_query?1988ApJ...331..682H&data_type=PDF_HIGH&whole_paper=YES&type=PRINTER&filetype=.pdf

Arp 231 consists of two parts IC 1575a and IC 1575B divided by a curving dust lane with IC 1525a being the golden colored northern part and IC 1575B the bluer southern part. I suspect, can\'t prove, the golden IC 1525a would be the compact, dense gas and dust free galaxy and virtually everything else is debris from both plus the large galaxy it is interacting with. The galaxy was discovered by Lewis Swift on September 5, 1896.

Arp\'s note on the system reads: \"Faintest arc extends about 2\' S of the nucleus with absorption.\" Here he missed mentioning an even fainter arc to the west (right) running behind a blue star that extends out even further than the one Arp saw. I\'ve placed the label for Arp 231 beside the western arc\'s southern end. I saw hints of even more distant ones in the original FITS but so weak they could be noise. In any case, they didn\'t survive color addition. This one will need more time to decide the issue as I didn\'t find anything deeper than mine on the net.

While everything indicates this is two interacting galaxies NED seems to disagree. It classifies parts a and b as simply Part of a single galaxy. Though it does show the north part listed as MCG-01-03-002 and the southern as MCG-01-03-003. NED Classifies the system as S0+ pec. No classification is given for either part though the northern part is stated to have the morphology of a dusty elliptical. This even though they give its size as only 12 seconds of arc (that of the golden core). I still think most of what is seen above and below the dust lane is the larger disk galaxy that the small dense elliptical ran into. I found no papers on this system other than a few that mention it in passing as similar to what the authors were studying. Too bad as it appears to be quite interesting.

I took this one over two nights. First night had excellent seeing but very poor transparency that got worse as the imaging went on. Only the luminance data was usable. The second night had good transparency but horrid seeing, three times worse than through the heavy haze of the night before. The result was good detail in the first image and the ability to see deep in the second but with no resolution. Also, I had bright asteroids pass through the image both nights. I ended up using the second night for color (resolution issues not so important) and for the faint outer parts of Arp 231. The first night\'s luminance was used for everything else including all the stars and other galaxies. This left me with color tracks of two bright asteroids with no luminance track to go with it. I went back and added in the asteroids from the second night to the luminance data rather than eliminate the color trails. One bright asteroid (lower middle) was from the first night. You can see the seeing difference comparing its trail to that of the two from the second night. It is much finer thanks to far better seeing. Since no color data was not usable the first night it has no color trails. Since seeing the second night was poor I took the color data first hoping by the time it got near the meridian seeing would be better for the second run of luminance data. That was not the case, however. But it does explain why the color comes before the luminance trail. The night before I\'d waited until the object was closer to the meridian then took luminance on the east side and color on the west but due to the wait fall fog nailed me. I didn\'t take that chance the second night. Didn\'t much matter as seeing never did improve. It was taken October 3rd and 4th, 2010 UT.

The first-night asteroid (without color trails) is (9146) Tulikov at magnitude 16.8. It also shows in the lower right corner from the second night. That\'s how far it moved in 24 hours. The bright asteroid to the lower left of Arp 231 is (21986) Alexanduribe at magnitude 16.9. 4 other fainter asteroids from the second night were lost when I limited that night to showing only the shells and bright obvious asteroids I had noticed before I started searching the data. One fainter one I did notice and thus include is (110618) 2001 TC149 19.1 in the upper left corner.

The naming citation for Tulikov reads:
Composer Serafim Sergeevich Tulikov (b. 1914), People\'s artist of the U.S.S.R., is the author of many lyrical and patriotic songs that are very popular with the Russian people. 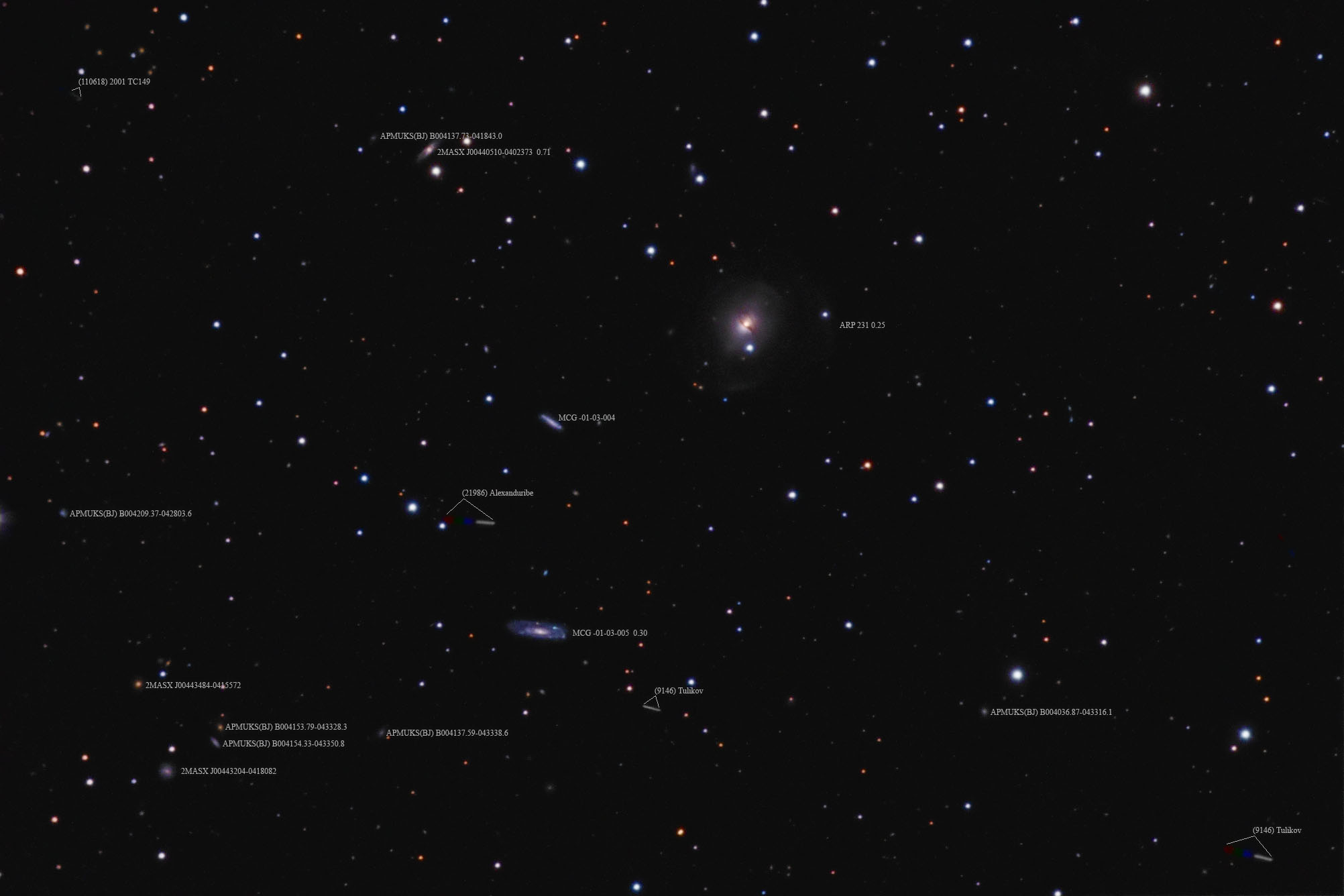 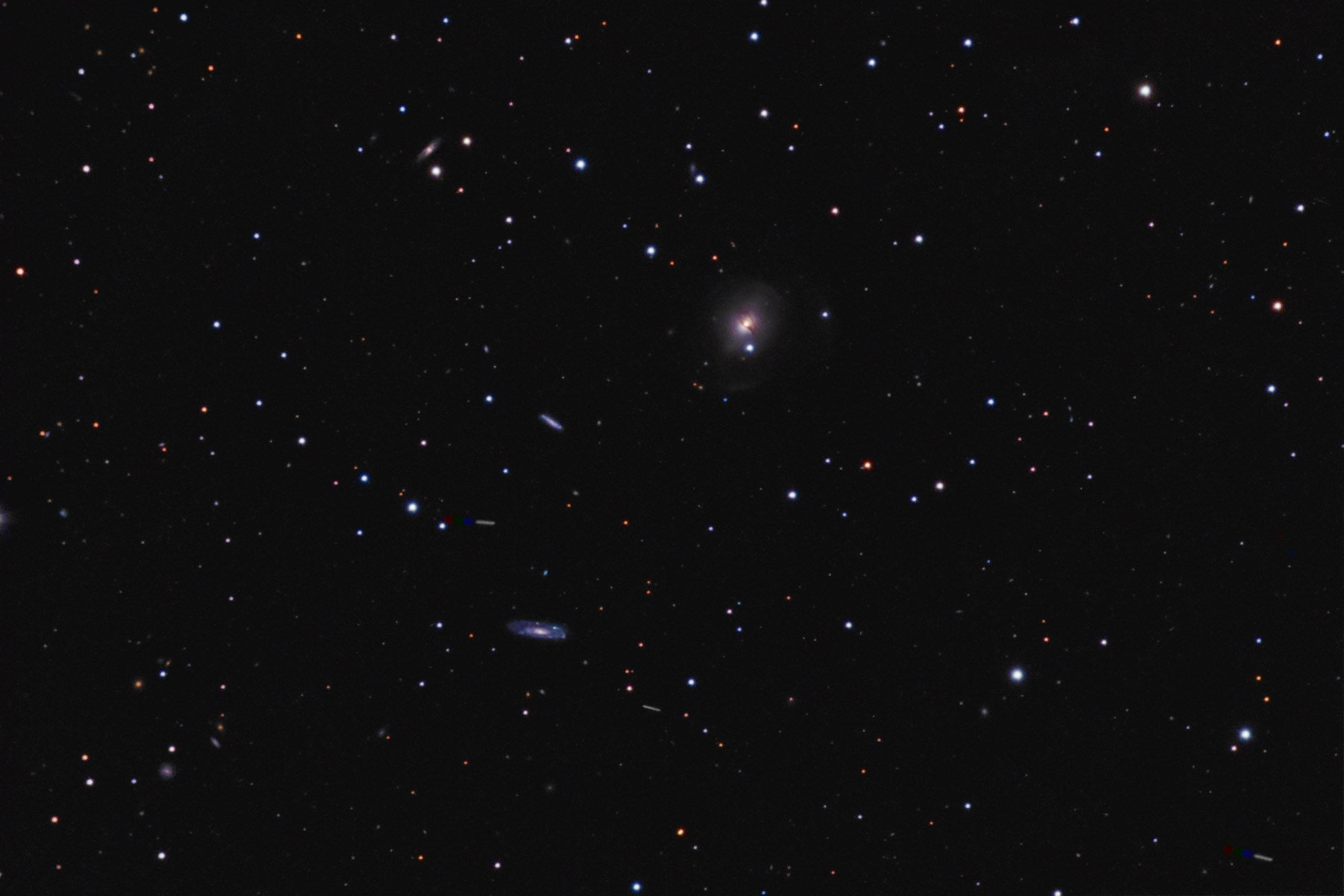 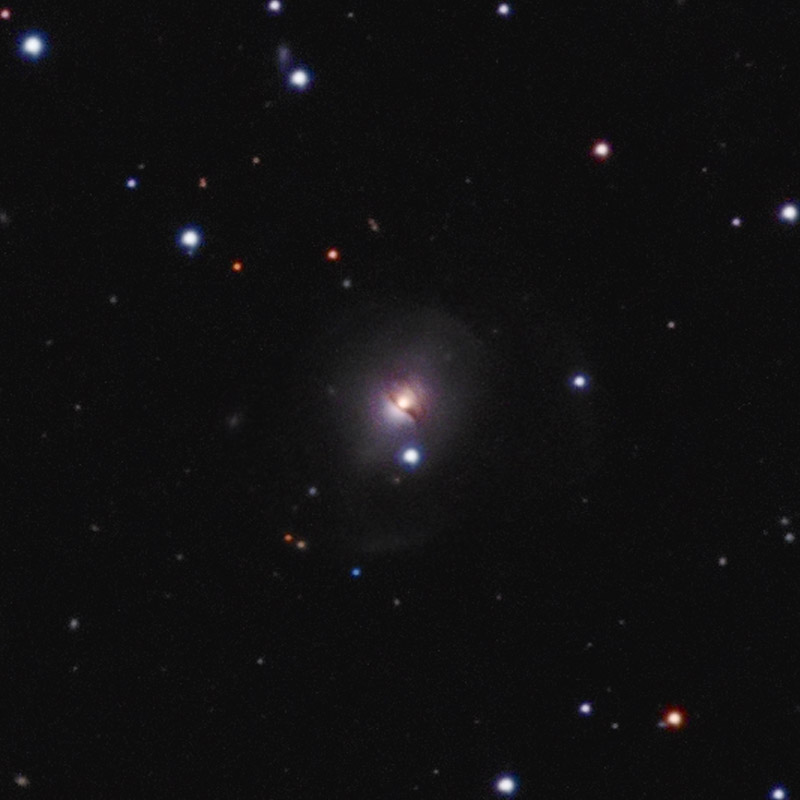