Arp 238/UGC 8335 is a pair of galaxies in northeastern Ursa Major about 425 million light-years distant. Arp put it in his category of galaxies with the appearance of fission. Just the opposite of what is likely really happening. His comment is apparently in error. He says: \"Double nuclei, north nucleus has third arm.\" His image is oriented east up. Mine is north up. Hubble\'s image I\'ve linked to is also east up. In the east up images, there is a third arm from the top (south) galaxy\'s core. Only 2 from the bottom (north) core. I wonder if Arp thought his image was north up when he made that comment. Normally he marks a V on the images\' north side. In this case, the V is on the south side, likely leading to his error. Otherwise, I can\'t make sense out of it. I never could fathom his fission category either. These are merging not fissioning galaxies. That wasn\'t understood at his time it appears. He also had one for material ejected from nuclei. Later in life, he decided quasars were ejected from galaxies rather than the active nuclei of galaxies so far away only the accretion disk and possibly the jet from the core can be seen with the galaxy being lost in the glare. Today we have techniques to bring out the hidden galaxy that didn\'t exist in Arp\'s day. Still, his theories bordered on (some, would say \"were\" rather than \"bordered on\") quackery and got him kicked off the 200\" telescope. I can\'t help but wonder if these categories, fission and ejection are related to this idea. Still, he was using appearance as his guide as no one knew for sure what was going on. His initial purpose for the atlas was to jump-start research into these peculiar galaxies in the hope it would lead to better understanding of how galaxies behave and evolve. He later used it to try and support his quasar ideas. Like Jerry Lewis, he was only appreciated in France. He lives there today last I knew. Edit: Since I wrote this he died December 28, 2013.

The true northern galaxy (upper right in my image) is classed by NED as Sc with a LINER spectrum and a general weak HII emission. Likely this is gas ejected by the encounter and now glowing from the many new super hot blue stars in both galaxies. The southeastern galaxy is also listed as Sc with HII emission but a note at NED says it is mostly in the core and that its core marks it as a starburst galaxy. Not surprising with such a strong interaction going on. NED, however, makes no mention of it being a starburst galaxy.

The full-scale Hubble image makes it appear the third arm is not in the same plane as the others but is headed mostly toward us rather at near right angles to the plane of the other arms. This could be pure illusion but the stars of it are clearly crossing the upper right area of the main disk turning it blue when it otherwise would be rather red in color. The stars of this arm are bluer than the other arms. When I first saw it in my image I thought this excess blue was due to bad color data as a rather bright moon rose while the color was being taken and was quite strong when the blue was taken. This is something I try to avoid but failed to notice at the time. But both Hubble\'s image and the SDSS confirm this so I didn\'t let it alter my processing any. I might have had I not had those to check. I gotta learn to trust my data. To me, it appears this \"third\" arm is really a continuation of the east arm of the northern galaxy seen in front of the southern galaxy. Could the odd stub from the northern nucleus be part of the arm of the southern galaxy? Hard to tell even from the HST image.

Sometimes the inclusions and omissions from the Sloan catalog drive me batty. To give an example I\'ve marked three galaxies in my image that are in the Hubble frame and are very obvious galaxies. Heck in my image I was sure from the PSF of them they were galaxies. None of the 3 are in NED\'s database which includes the Sloan survey of this field. But a very obscure 22nd magnitude galaxy in the Sloan survey is in the catalog though without redshift data. So how does this faint smudge make it in while far brighter galaxies don\'t? Wish I knew. Others I\'d like to know about like SDSS J131522.78+620741.5 are in the catalog (and marked by name in my annotated image) but are without redshift. Are they related to the other background galaxies I and Hubble picked up that are of about the same angular size? No way to know, unfortunately.

At the top center of the image is the core of a galaxy cluster. NED shows a rather obscure galaxy at its core rather than a huge cD as is normally the case. I\'ve labeled it G/CG followed by the redshift distance of both. While they differ this is more due to rounding than a real difference as the cluster shown at 1.0 is at a redshift of 1.049 and the galaxy shown at 1.053. If I\'d have used one more decimal point they\'d be the same. The cluster is [YSS2008] 464 ([YSS2008] = Yoon+Schawinski+Sheen [not Charlie]). NED shows it as richness class 4 and gives no diameter. In any case, there are quite a few galaxies with a redshift distance of 1 to 1.1 billion light-years in the image. I suppose most all are considered members or is it just those at the top of the page? Wish I knew. 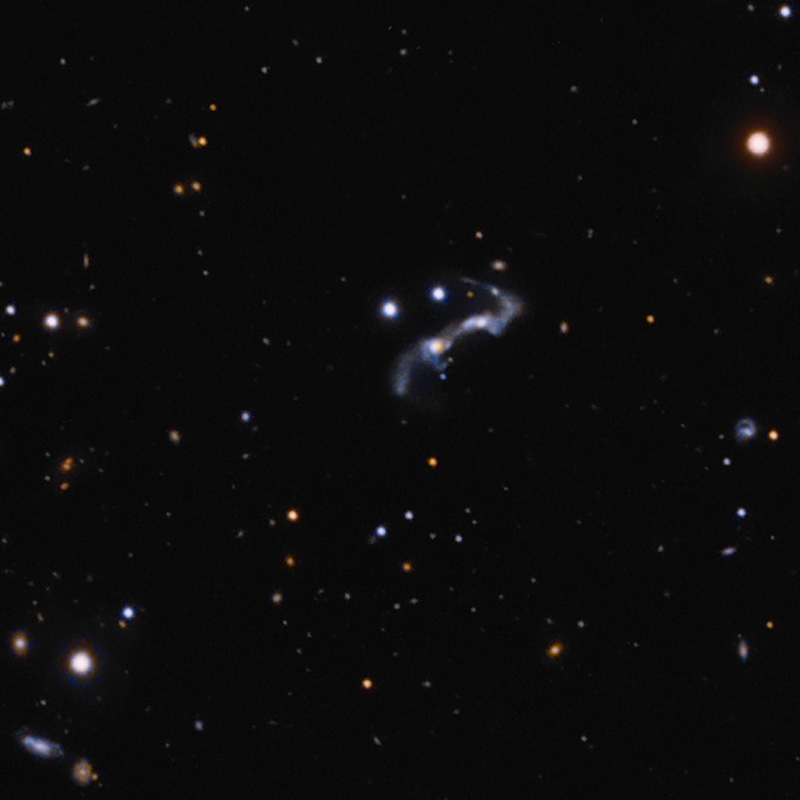 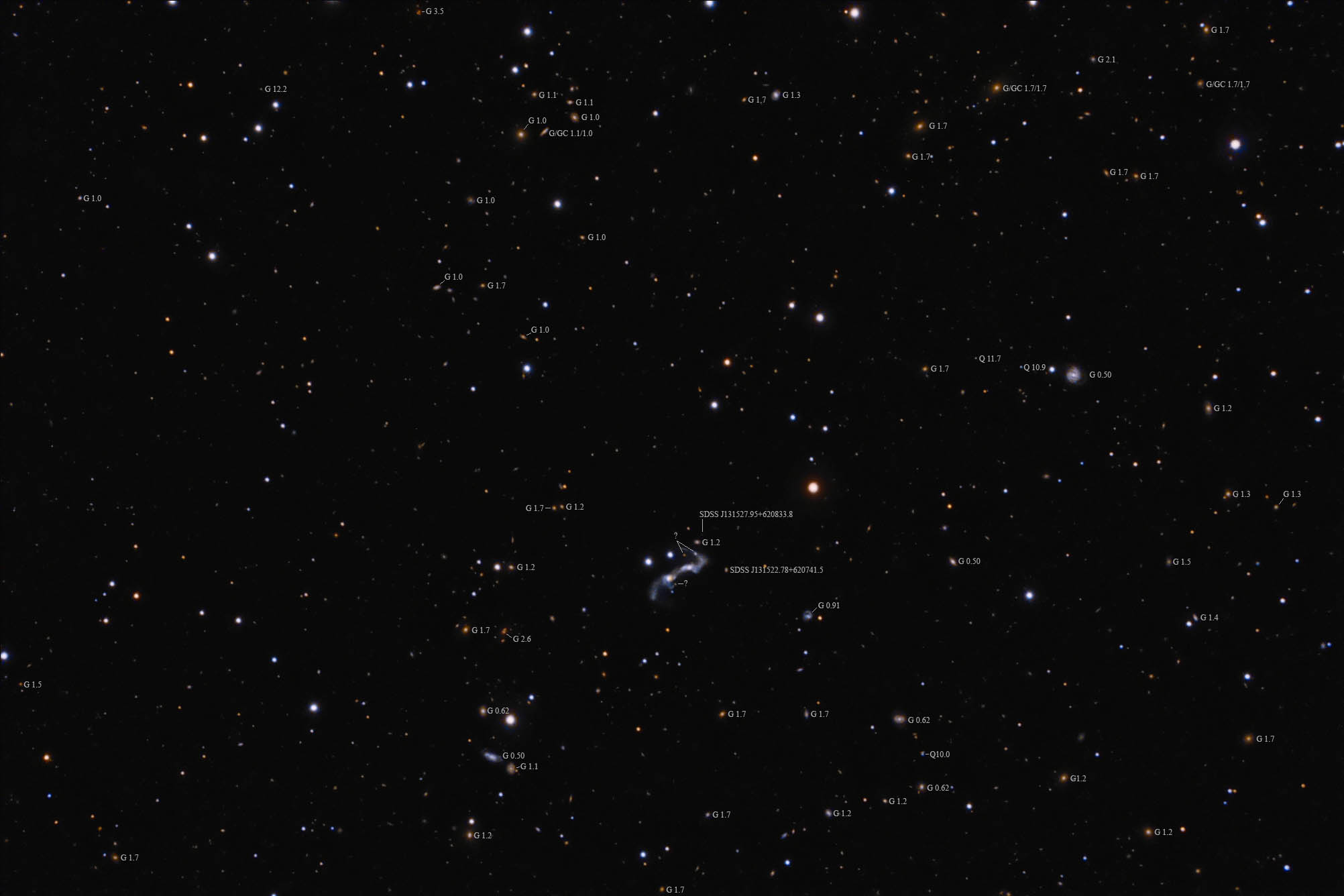 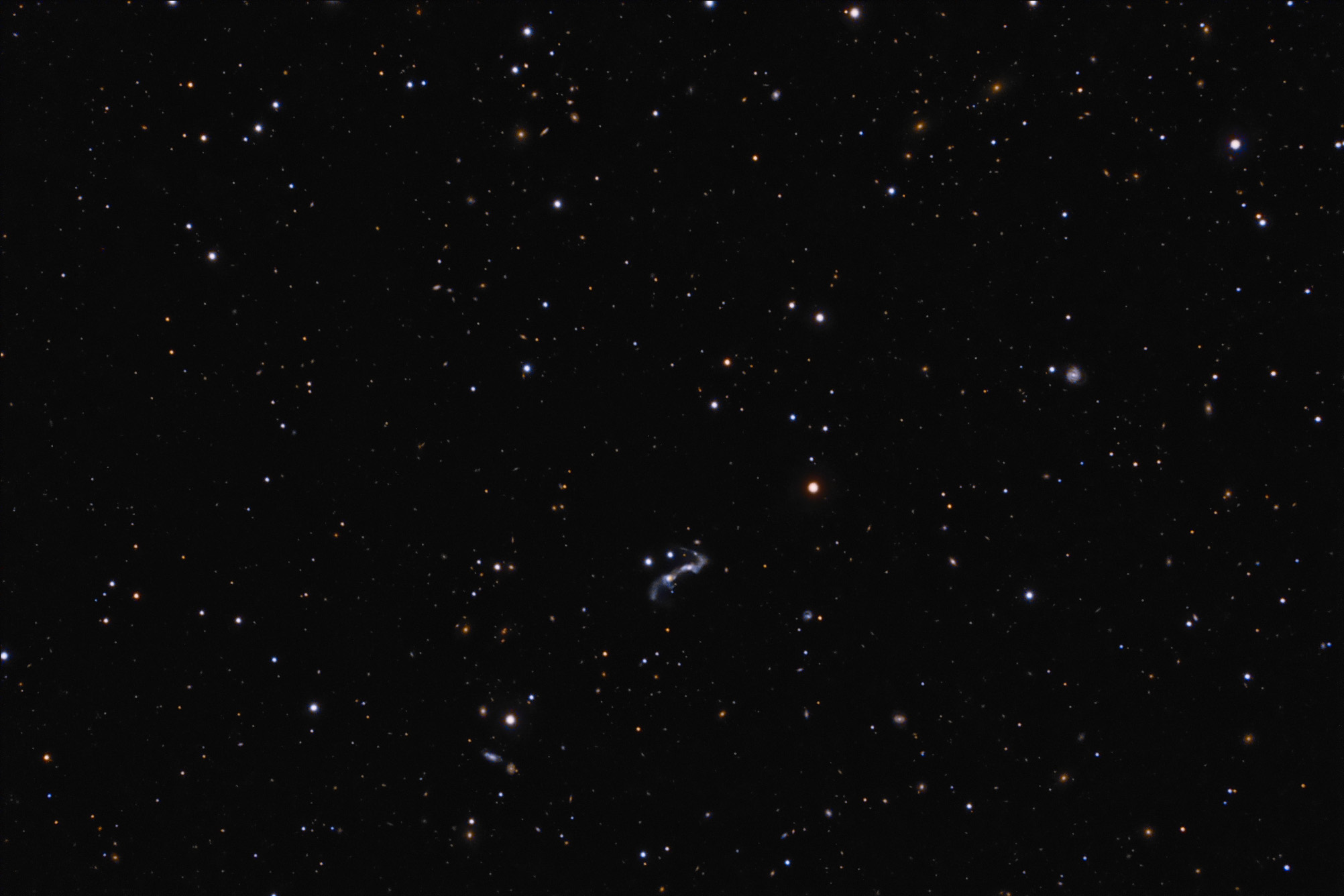