Arp 239 is a pair of interacting spirals of the M51 type per notes at NED. It consists of two galaxies, NGC 5279 and 5278 (left to right--east to west). It appears they have a common arm that isn\'t just a perspective feature, or so several papers indicate. Arp notes \"smaller galaxy is fairly symmetric spiral\". Oddly that is what it appears to be in his image yet in mine the western arm seems smaller and tighter to the core than the eastern one. Color may have something to do with the different appearance. NGC 5278 appears to be a typical one-armed spiral. As to the common arm, it appears more a tidal blob between two arms than a real arm, at least in my image. A supernova was seen in the western galaxy in 2001.

Arp put this one in his category for galaxies: Appearance of fission. As if he saw this as one galaxy splitting into two. This entire category of 14 entries mystifies me. Did he really think they were splitting? I\'ve never been able to answer that question. William Herschel found the larger galaxy, NGC 5278 on April 14, 1789 but missed the companion. It is too faint to have made either Herschel 400 observing programs. The companion, NGC 5279 was found by his son John Herschel on May 4, 1831.

There was this interesting note at NED: \"The main specific feature of this system are (sic) strongly noncoincident positions and radial velocities of the dynamic and photometric centers of both components (3\" and 100 km s^-1^ for NGC 5278 and 6\" and 20 km s^-1^ for NGC 5279, respectively). A detailed photometric analysis of the system performed by Mazzarella and Boroson (1993) revealed a number of regions or spots of enhanced brightness and the brightest of them is located in the satellite. The strong difference between the dynamic and photometric centers mentioned above may be explained by a similar inhomogeneity of the photometric properties of the two components. The latter may be due, in turn, to the interaction between the galaxies.\"

Apparently, thanks to the interaction the rotation of the galaxies is no longer centered on the brightest core of each galaxy though it appears there\'s no agreement exactly where these rotation centers are in the galaxies. In other words, colliding galaxies really make a mess of things until they finally settle down in a few hundred million years.

NGC 5278 is classed as SA(s)b? pec while NGC 5279 is SB(s)a pec. Though some notes class both as Sc. Redshift data is similar for both putting them 350 million light-years distant. They are located in the constellation of Ursa Major, about halfway between Mizar and M101. Mizar-Alcor point right at it for those who want to try and find it visually.

There are a lot of galaxies in the lower left quadrant of my image. The largest and brightest is a rather white elliptical closest to Arp 239. It may be IC 922. NED says its identification is uncertain but gives no details. It is just under 900 million light-years distant. To its left is the tiny compact galaxy SDSS J134305.74+553554.0 at a bit over 900 million light-years. Further left is a much bigger elliptical that could be IC 0923. Again its identification is uncertain. It is about 900 million light-years distant. Above it is an edge on or SO galaxy that may be IC 925 at a bit over 900 million light-years. Again ID is uncertain per NED. This seems to be a broken record as to uncertainty and distance! If you are getting the feeling a galaxy cluster is involved you are right. It is Abell 1783. At least I\'m certain about that identification. It has a diameter of 30 minutes of arc and is considered to be centered a bit below and left of the galaxies I did identify. Thus it is mostly out of my frame. NED puts it at a distance of about 920 billion light-years though one note indicates a redshift putting it far closer. That appears unlikely looking at the galaxies that are in my image.

Not all galaxies in the lower left, however, are members of Abell 1783. For instance, the bright somewhat red elliptical near the bottom edge and a bit right of the previous region may be IC 919 at only 480 million light-years. Yep, another uncertain ID. Right beside it to its lower right is the IR galaxy SDSS J134245.98+553107.0 also at 480 million light-years. To their right is the near edge on spiral that might be IC 918 which is about 940 million light-years distant and thus part of the Abell group. Appearances can be deceiving it would appear. I could go on but you get the idea. Instead, I\'ve included an annotated image with these and others noted. Also, there\'s a second galaxy cluster just beyond the eastern edge of the image which includes IC 926 (ID uncertain -- of course) on the very eastern edge. It is SDSS-C4-DR3 3007 which includes some 33 members. It is centered on IC 929 just east of IC 926. Of course, NED lists its identity as uncertain as well. If I\'d have put Arp 239 to the upper right in the image I could have picked up more of both clusters. I didn\'t realize either were nearby, unfortunately. Note the two quasars in the toward the upper right corner.

Some passing clouds during the blue and one luminosity frame cause moderately bright stars to be somewhat distorted. I tried to tame them as much as possible. I do need to reshoot this under better conditions. Still, the galaxy itself was little bothered by the clouds as its light was totally blocked while they were passing by. The nice thing about not guiding, it saves subs from passing clouds. When clouds hit it doesn\'t cause the guider to go nuts trying to find the star so picks up right where it left off once the clouds pass.

I\'ve attached a black and white Hubble image made from near IR and UV data. Without visual color data, I didn\'t try to make a color image out of it. The UV data makes the new star formation very bright. Also since these areas are dusty and that is heated by the new stars these areas were also bright in UV as well. Thus it won\'t look like my visual light image. The SDSS image includes some IR data so it too is a bit different than my image but without the UV that doesn\'t get through our atmosphere the new star regions are similar to my shot.

Sorry about the font on the annotated image. Somehow my default got changed to something a bit odd and I didn\'t catch it in time.

I\'ve also attached a cropped image of just Arp 239 at 0.65 seconds per pixel to better show its details. 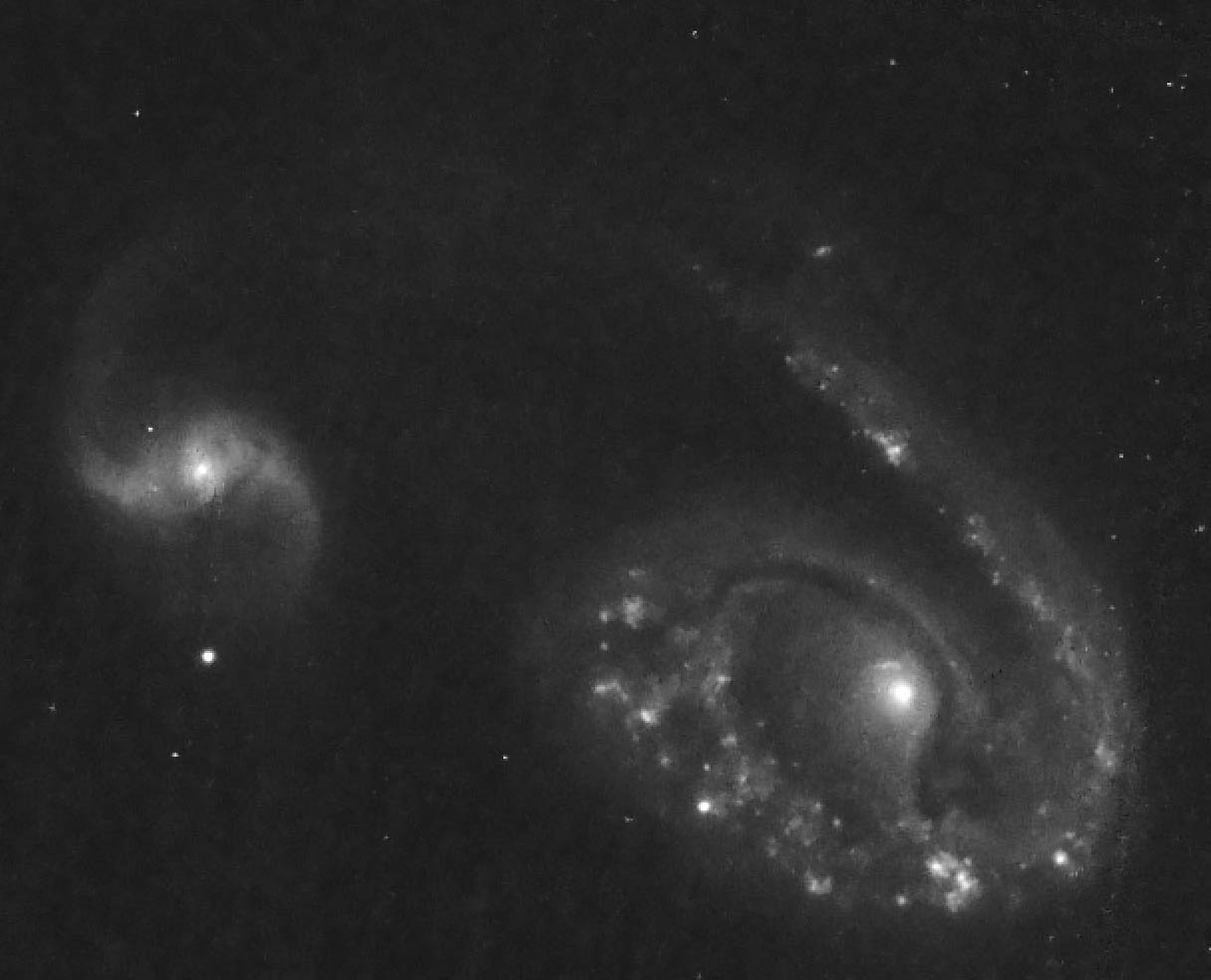