Arp 243, aka NGC 2623 is thought to be the result of a merger of two or maybe three galaxies. Arp, however, classes it under \"Galaxies (not classifiable as S or E): Appearance of fission. Fission is the splitting of an object while fusion is the joining. So if mainstream science is right he has this exactly backward though he is talking about appearance not necessarily what\'s really going on. He does think disturbed galaxies like this one eject objects, especially what we call quasars. To him, quasars are nearby objects ejected from disturbed galaxies and the redshift somehow relates to their age of creation. Something about electrons gaining mass through \"communication\" with the rest of the universe. He actually puts it in scientific terms that take him out of the total crackpot class but it did cost him his access to the 200\" scope and sent him packing to Europe when his ideas seemed a bit more accepted. To him, low mass electrons would show spectral lines with less energy than those created at the time of the Big Bang (another concept he doesn\'t accept the same way as other astronomers). Thus, the lines appear redshifted same as they would due to distance. Since electrons can be created in atom smashers and those show no hint of low-mass his theories don\'t get much attention though he claims such electrons, being created from \"old\" protons colliding, this is to be expected, it is only those created out of pure energy that somehow aren\'t tainted by \"old mass\" that would show this effect. OK, maybe he is a crackpot. Anyway, this idea of galaxies ejecting things, especially disturbed ones, does add to his fission classification.

NED classes it as simply Pec; LINER, LIRG Seyfert 2. Meaning its central region is very active creating lots of stars heating dust to make it a luminous IR Galaxy. The problem is it has no central core that anyone can identify. Seems it hasn\'t settled down enough from the merger(s) for one to fully develop. Normally I see LINER and Seyfert 2 galaxies but it is one or the other. Sometimes papers argue over which it is. Here we have both. Again, an indication of an, as yet, incomplete merger? My guess anyway. Notes at NED are interesting here. One says: \"NGC 2623 (Arp 243), appearing eighth in the Toomre sequence, is, like ARP 220, a superluminous IRAS galaxy, and is also very bright in the radio. Very long tails are visible but the central masses have become indistinguishable. Only one true nucleus is thought to exist.\"

Another: \"NGC 2623 is a well-studied triple system included in Arp\'s Atlas of Peculiar Galaxies (Arp 1966). Bright tidal tails are observed in both the optical and near-infrared; these tails suggest that a merger has occurred. The parent nuclei have not been resolved in either the radio or near-infrared.\"

There seems a bit of a discrepancy as to its distance. Its redshift would indicate a distance of about 260 million light-years. But in 1999 a type 1a supernova was seen in this galaxy, SN 1999gd. These are considered a \"standard candle\" for estimating distance as it is thought astronomers have a good handle on how to determine their true brightness. Since they are thought to have about the same brightness. There\'s some variation due to the \"metal\" content and other factors such as rotation rate of the star but this is rather easily handled. Using SN 1999gd as a reference the galaxy is further away than its redshift would indicate, about 332 million light-years. A rather large difference. The field has a smattering of distant galaxies and one galaxy cluster toward the east side that shows as a group of tiny orange ovals arranged at various angles way behind a few blue foreground stars. It is MaxBCG J129.83536+25.77318 and is about 2.8 billion light-years distant. It is listed as having 17 members, though I see more than that. The MaxBCG catalog contains some 13,800 galaxy clusters found on analysis of the Sloan Digital Sky Survey data. They combed the data for galaxies with the same red color in a small area. It is thought to be fairly accurate at finding clusters as intergalactic reddening should be rather consistent over a small area of sky. Thus a lot of galaxies with the same reddening are likely at the same distance thus indicating a true cluster.

The only other galaxy of any angular size in the image is the large red elliptical north east of Arp 234. It is 2MASX J08383858+2550212 at 1.1 billion light-years. Nearly all the other galaxies in the image I could find data on are at least that distant. There is one lonely quasar at a bit over 10 billion light years in the image shining like one of many dim blue stars in the image. I mention it as Arp thinks way too many quasars are found around his disturbed galaxies. Though in his theory those near the galaxy have a large redshift and those further are older and thus the electrons more massive and thus they show a lower redshift. Since none of those he cited originally have a redshift even half of this one and it isn\'t all that close to the galaxy it just doesn\'t fit his theory. To find it follow the line of the lower right tidal arm past a small vertical lenticular galaxy. It is the first nearly 19th magnitude blue star after that. A bit right and up from a brighter blue star.

While Hubble has imaged this galaxy, no cleaned up color image of it has been released that I could find. So I went into their data base, found filtered images that could make a fairly good color image and made my own. It was exposed for the core, the tidal wings were severely under exposed so I only used the high-resolution WFPC 2 small chip for this image. It is a bit reduced from the original 800x800 image, mostly due to my cropping it but I did reduce it about 10% as well to hide some cosmetic defects thanks to cosmic rays that I couldn\'t clone out without making it obvious. Still, I think it shows the core region very well. It is oriented north up same as my image so you should be able to at least recognize major features in my image. Due to the filters not being true RGB filters, it is way too blue, I just didn\'t have red and green data that I could manipulate to give a \"true color\" image. The images weren\'t taken to create a true color image and not knowing the shape of each filter\'s skirts after a lot of trial and error, mostly the latter, this is the best I could do.

Edit: Since that was written HST images of it have been released. A good example is found here: http://cseligman.com/text/atlas/ngc2623hst.jpg 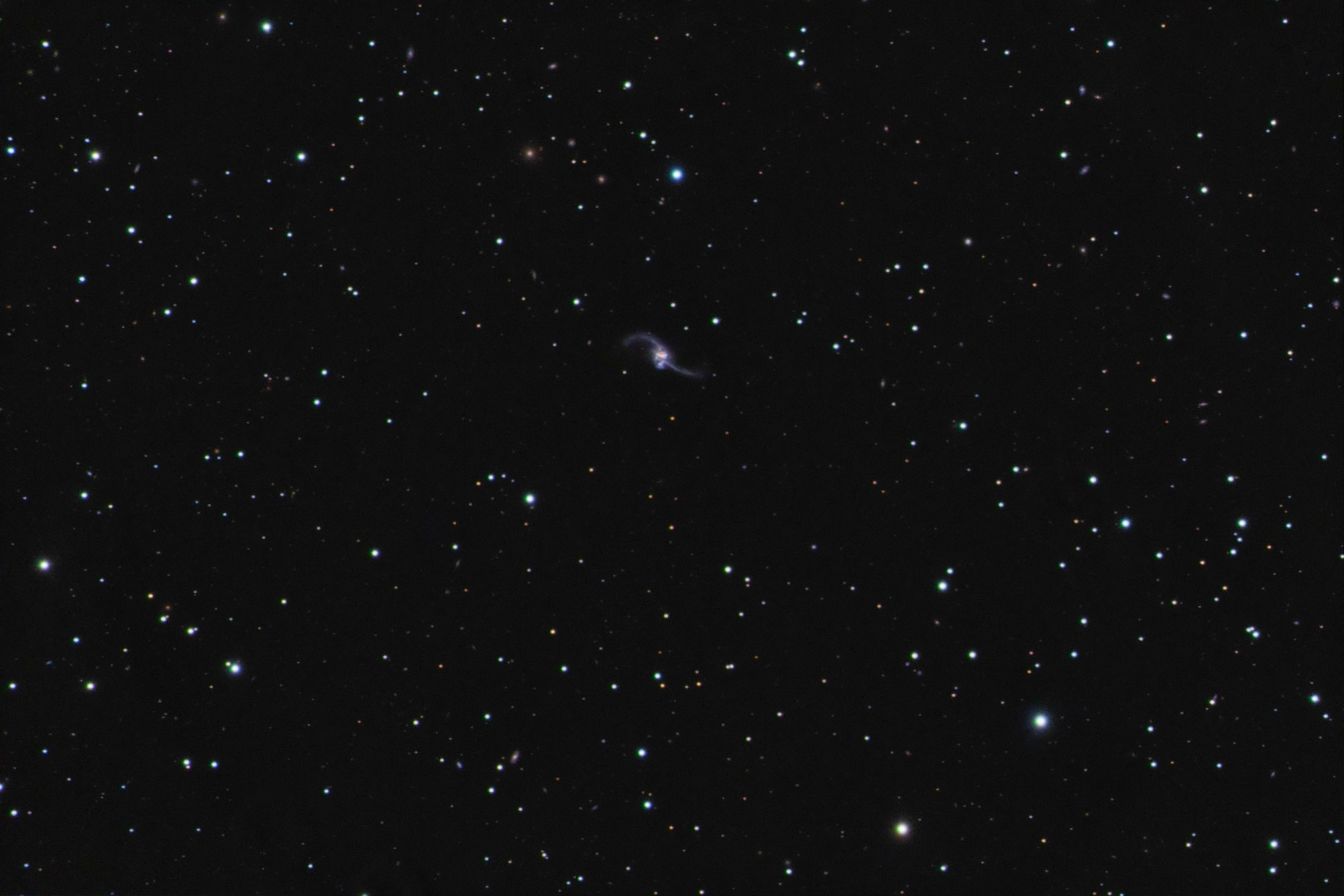 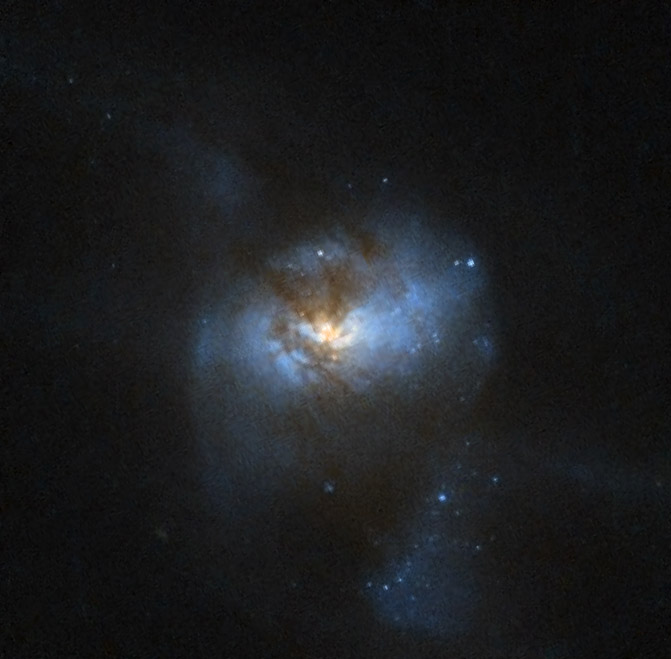