Arp 247 is a pair of interacting galaxies; IC 2339 and IC 2338, left to right and top to bottom. A common arm connects them. At least Arp seems to say this when he says: \"Spirals have common arm, N spiral arm continues NE.\" The latter comment seems to refer to the southern arm of IC 2339 that goes north and continues as a faint tidal streamer far beyond the galaxy. He seems to have missed a similar streamer going mostly west and a bit north on the other side. It is fainter and out of his image. Apparently, he didn\'t know it was there. It is classed under his category: Galaxies (not classifiable as S or E); Appearance of fission. Odd but his comment calls them spirals then he puts them in a class saying they aren\'t identifiable as spiral or elliptical. I see several problems here. One is that while the arm may appear \"common\" to both galaxies this is possibly a perspective issue and if seen at a different angle one is likely in front of the other and we are seeing an overlapping of two separate arms. Since colliding galaxies can merge but not split as they are already separate objects this might be fusion (a merger in progress) but certainly not fission. Or is he referring to that tidal arm as splitting off? We now know these almost always collapse back into the merging galaxies though some stars may never return, most do. At least in the simulations I\'ve seen or run.

Redshift data on both galaxies shows virtually the same radial velocity which translates to a distance of about a quarter of a billion light-years. This strengthens the idea they will merge in the future. Or already have and the light just needs a quarter of a billion years to get here to tell us. Actually, due to the expansion of the universe, it will take a bit longer than that to reach us through the ever-growing universe. The pair is part of what is known as the Cancer Cluster. The main part of the cluster is well out of my field of view to the west-southwest. Quite a few galaxies across my image have a similar distance so are likely members of the cluster as well.

IC 2339 is classed as an SB(s)c pec galaxy while IC 2338 is SAB(s)cd pec. I\'ve not mentioned much about classification so let me go into more detail here. SB(s)c can be broken down to SB indicating a barred spiral, one whose bar is straight, if it curved some it would be SAB. The (s) means the arms that come off the bar go only one way, If they had gone both left and right from the bar then it would be (r) for ring even if that ring was far from complete. The c indicates how loosely or tightly wound the arms are. Tightly wound gets an \"a\" very loose gets a \"d\". Pec, of course, means peculiar so it sort of fits the previous classification or is thought it did before something happened to it like running by this other galaxy. IC 2338\'s classification as SAB means the bar is somewhat curved, not straight in that the spiral part that comes off the arms in a gradual transition rather than a sharp one as in SB class. (s) has been covered and the cd means it is looser than a c class but not as loose as a d class. And of course, it is peculiar due to its run in with IC 2339. This is a somewhat oversimplification of the de Vaucouleurs classification. Hubble\'s class would be simply SBc and SBcd. It has fewer divisions. Just is it spiral or elliptical or a spindle. If spiral does it have a bar and then how loosely the arms are wound. Elliptical galaxies are given a number, 1-5 depending on how elliptical they are 1 being a sphere. Spindles are just S0 in Hubble\'s system. Those that don\'t fit any of this are called irregular. De Vaucouleurs adds a class Sm which could be called a messed up spiral. Too messed up for the normal spiral classes but still recognizable enough not to be an irregular. The Magellanic Clouds would be such an example and is the reason for them to denote this class. For a good link on all of this and a lot more (big Powerpoint file) see: http://www.astro.ufl.edu/~vicki/galaxies/Lecture2.ppt There was a much better PDF version but it seems to have vanished to be replaced with the ppt file of the same URL except for the ppt extension.

The large galaxy above Arp 247 is IC 2341, an S0 galaxy also about a quarter billion light years away so a member of the Cancer Cluster. The Sc spiral down and left of IC 2341 is LEDA 142820, a 16th magnitude spiral in the Cancer Cluster.

The Sloan image can be found at:
http://astronomerica.awardspace.com/SDSS-5/IC2338.php 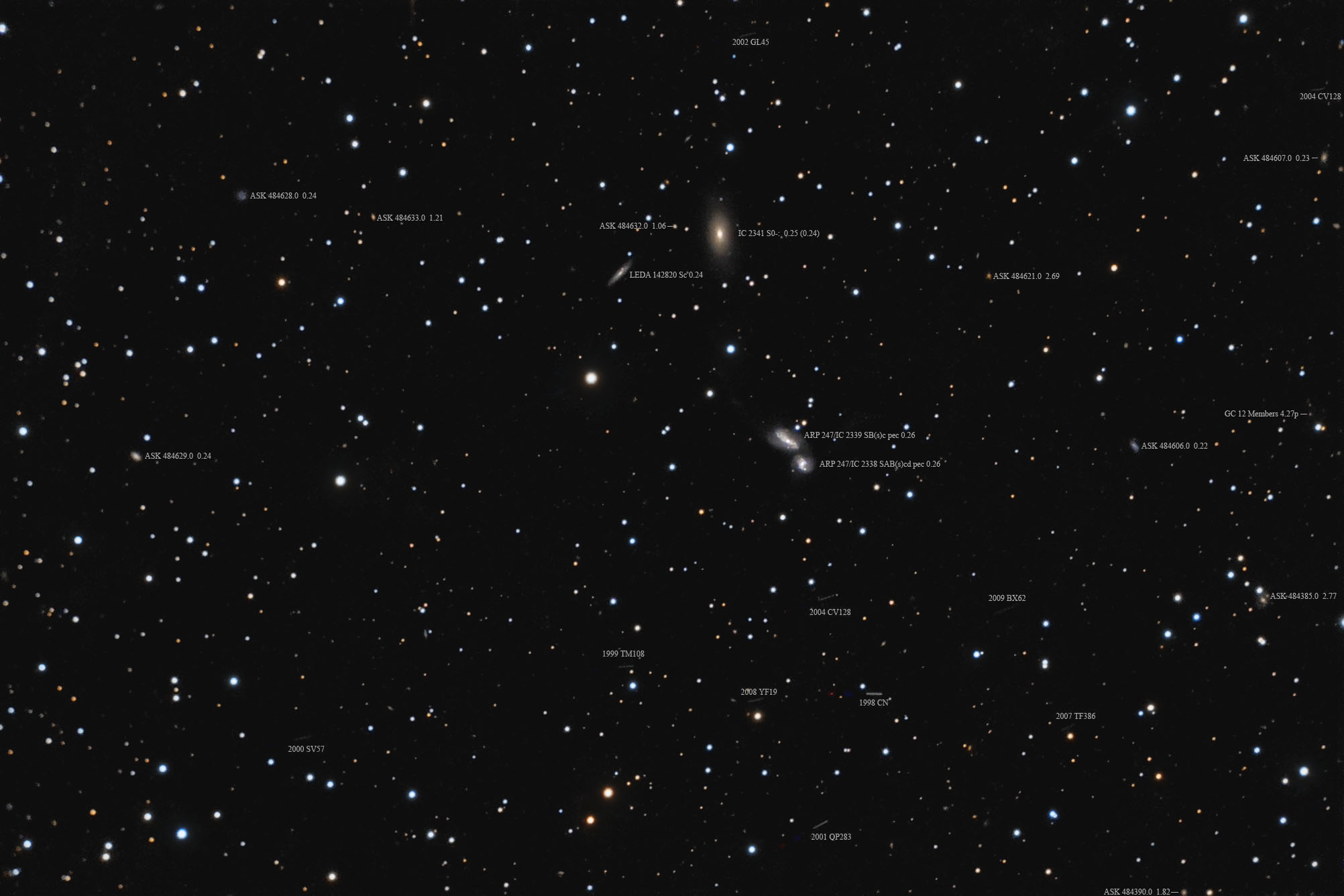 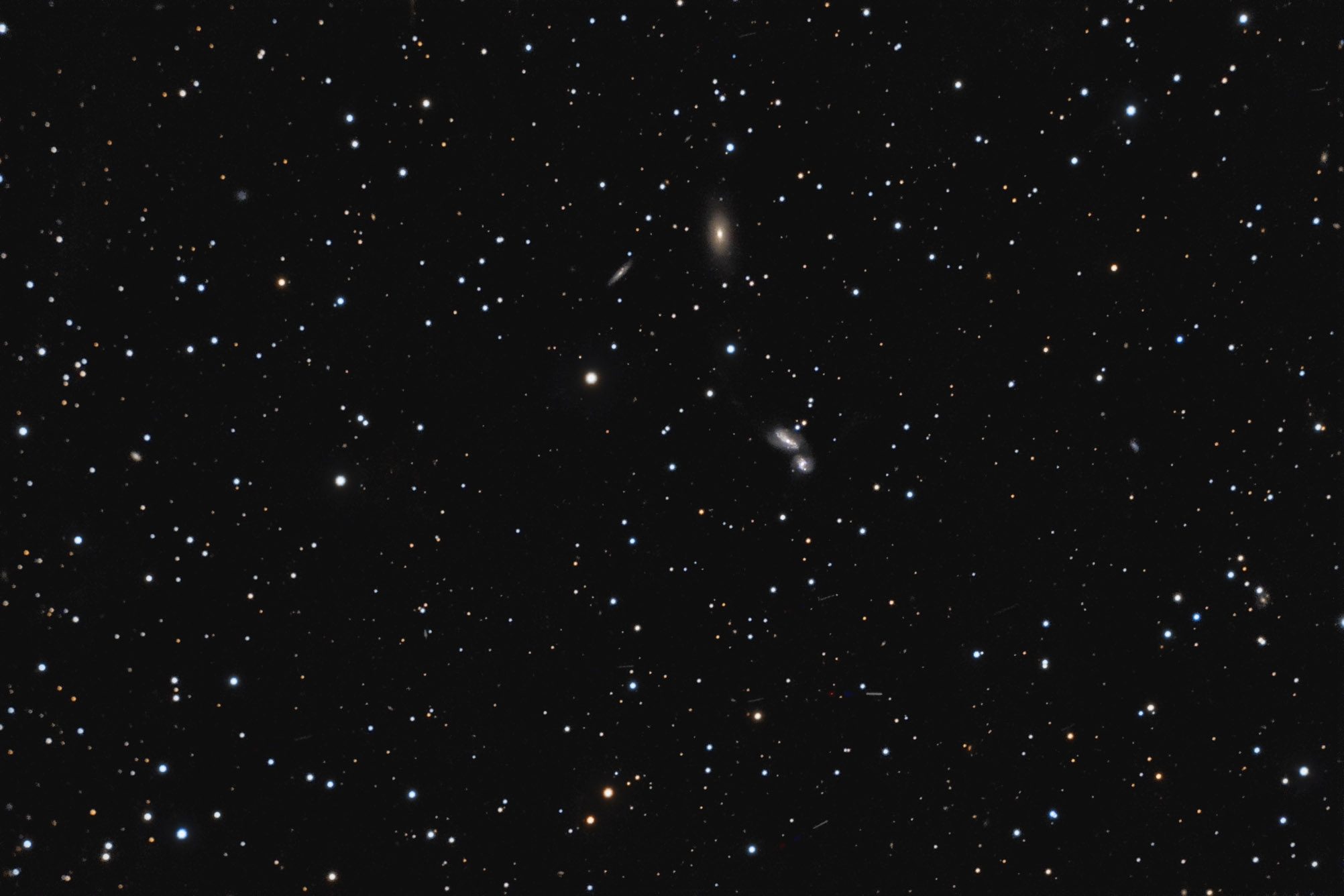 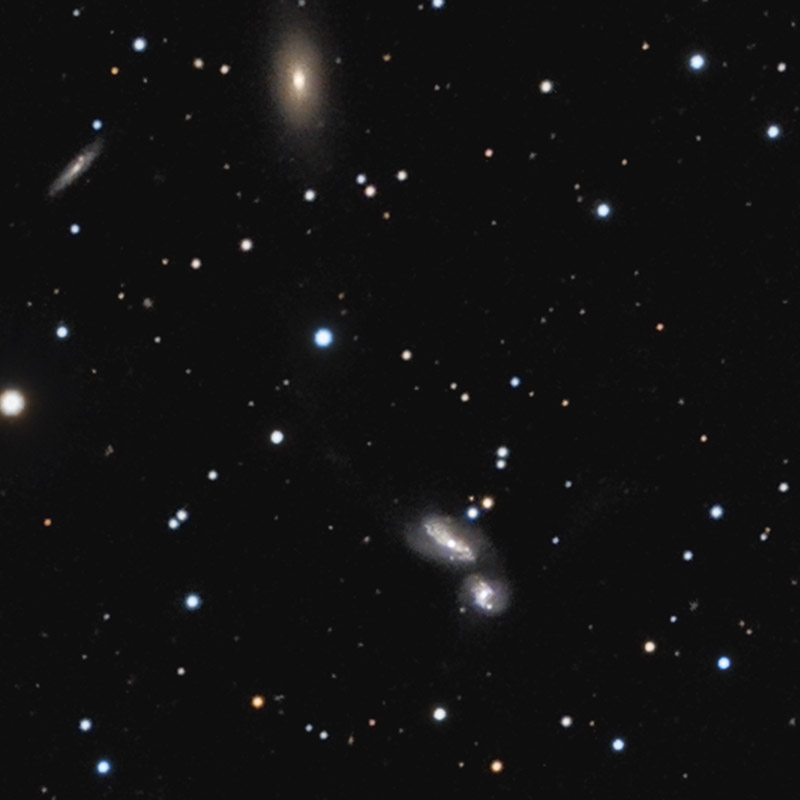