A few Arp galaxies are very photogenic, Arp 85 (M51) for instance, most are at best interesting. Then there are those so far away or so small they are the photographic duds. Unfortunately, Arp 250 falls into this category, in this case, because it is so very small yet could be two colliding small galaxies.

While there are two galaxies here only the one to the west is considered to be Arp 250 which he classed by Arp under Galaxies (not classifiable as S or E): Appearance of fission. It does indeed appear to be a galaxy that has been cut in half right through the core. Or else it is two spirals about to collide. It is only about 70 million light-years distant, two and a half times closer than Haro 1 in the lower left corner. It is a rather small galaxy. The only catalog entry for its \"companion\" to the east is in the PGC where it is listed as #2063674 at magnitude 17.5. My image is poor but it appears distorted so may be involved. There\'s just not enough information to know. In all, there\'s a dearth of data here. I figured its odd double nature should have generated some papers but I found none. Heck, Arp apparently didn\'t have anything to say on this one. At least I couldn\'t find any comment from him on it. Nor any by anyone else other than a visual sighting with a 25\" scope.

After I wrote the above paragraph I\'m finding some sources, such as NED consider the eastern two armed spiral as Arp 250. Same happens when I enter it into the STScI DSS server using SIMBAD to resolve the coordinates. Yet SIMBAD itself gives the western galaxy. Arp\'s image is framed to give equal prominence to both. The only object showing anything that could be construed as splitting would be the two colliding galaxies to the west.

Little information is available on anything in the image. The very blue tiny galaxy west (right) of Arp 250 is HS 0732+3529 at the same distance, 180 million light-years as Haro 1. HS stands for Hamburg/ESO QSO Survey. Apparently, it looked for compact blue objects as likely QSO candidates and found this galaxy in the process. NED lists no other catalog entry for it.

There\'s another very blue galaxy SE of Arp 250. Appears to be a spiral. Oddly no catalog I checked includes it. Is it too at 180 million light-years? I have no idea. I can\'t even give it a catalog entry.

Galaxy in Southeast corner is Haro 1/NGC 2415 classed by NED as possibly an irregular Magellanic galaxy. Redshift indicates a distance of about 180 million light-years. Seems large for a dwarf and while the spiral structure is distorted I don\'t see it as an irregular galaxy. Haro galaxies are blue with emission lines. It is thought paired with one or two other galaxies described as 22 minutes north which puts them out of my FOV. The only candidate, out of my field, I can locate is UGC UGC 03937 but it is 23 minutes NNE with a redshift distance of 190 million light-years. HS 0732+3529 is only about 17.4\' away so may not fit though its distance and very blue color would seem to say otherwise. Only catalog entry anyplace for the one (or is it two) blue galaxies just to the west of Haro 1 is PGC 213406 with little other information. I see a wisp of stars below it but not quite connected to it. No nucleus to it. So is it a tidal arm pulled from this galaxy or another galaxy entirely, just one with no defined core? One reason Haro 1 looks distorted is there are three stars superimposed on its arm structure making them look more distorted than they really are. You have to look closely to see them. I wouldn\'t have noticed them except for one paper that mentioned them.

Haro 1 seems to have confused the keepers of the Hubble data archive. I checked the archive to see if Hubble had imaged Arp 250. I was happy to see two images. At least I\'d have a black and white image. Nope. It was Haro 1. So I tried other catalog names for Arp 250. All brought me back to Haro 1 -- oops. So I tried Haro 1 and got a lot of images of it, none the two filed under Arp 250. Interestingly the mono image labeled Arp 250 was the best data. I then took color filter data from Haro 1 data and made the attached Hubble image of Haro 1. It\'s a tad better than mine. Though is it billions of dollars better? Hmm. NGC 2415/Haro 1 was discovered by William Herschel on March 10, 1790. It is in the second Herschel 400 observing program where it is described as \"tiny.\" With a diameter of about 50,000 light-years, I\'d not say it is \"tiny.\" Just that it appears tiny from our distance but it is far larger than the two galaxies that make up Arp 250.

Just off the bottom left edge of the image is the galaxy cluster, ABELL 0590. There is a possible QSO just on my image. It is only 2.5 million light-years away. NED says it is a galaxy, SIMBAD says QSO. In my image, it appears to be a very orange galaxy right along the lower left edge of my image, NE of Haro 1 so I have to vote for the galaxy designation. Likely one with a very active nucleus. 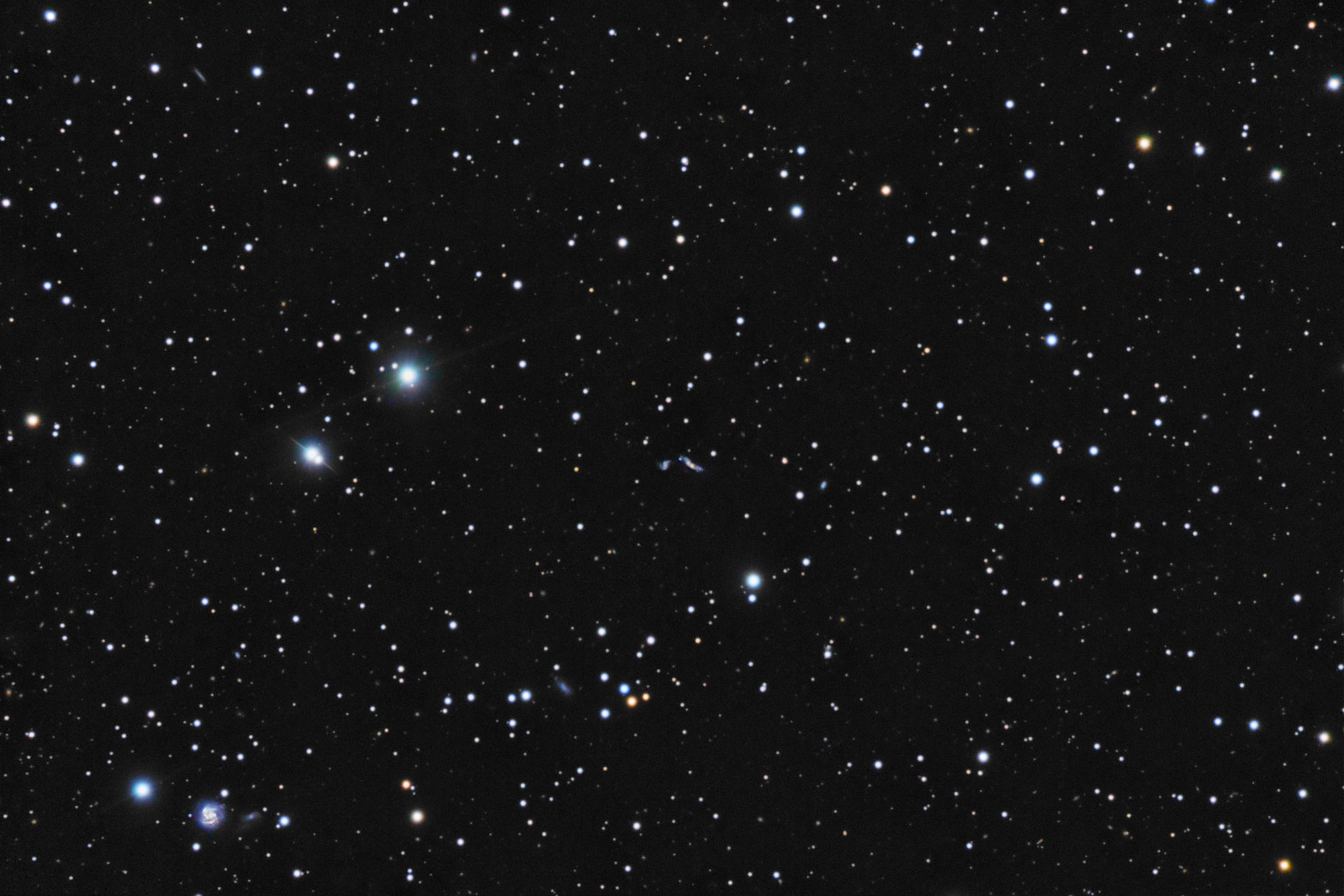 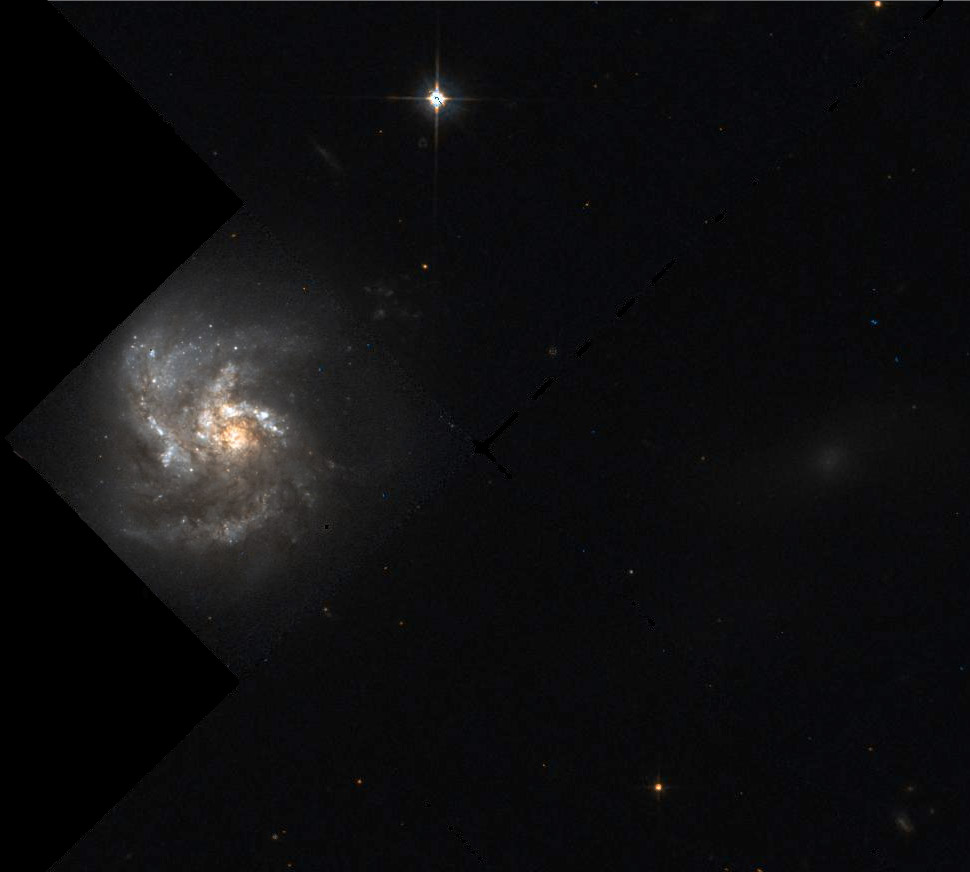