NGC 5917 is classed as Sb pec? and is the northern galaxy. It has a rather large faint outer halo and is somewhat disturbed. It is listed in the 2MASX catalog of InfraRed objects so likely has some dust heated by star formation we can\'t see. While sometimes a sign of interaction that isn\'t necessary. The southern galaxy with the two huge plumes is MCG -01-39-003. Redshift puts it slightly more distant but this is likely just due to relative motion rather than a real distance difference. It is classed as S0 pec. A note at NED indicates the northern plume reaches NGC 5917 and thus is a bridge. I certainly don\'t see that in my image nor in Arp\'s but if there would explain his fission category as he uses it mostly for galaxies that are apparently connected by a tidal stream of stars. The note also notes the system is \"perfectly isolated\". Maybe but I\'d like to know more about LEDA 1017437 to the south of MGC -01-39-003. It is off the other plume and at 800 million light-years. With the plume headed toward it, I find it a \"galaxy of interest\", as the detectives say.

Kanipe and Webb have this to say about the pair. \"This strange pair of galaxies is connected by a tenuous bridge, visible both in the Arp Atlas photograph and Richard Miller\'s image (above). Close examination shows that the interiors of both galaxies have been stirred by experience. Since the system is totally isolated in intergalactic space, the bridge and the disturbed appearance of the disks suggest a galactic sideswipe.\" Richard Miller\'s image, which includes a 2005 supernova is at http://www.338arps.com/arp_254.htm

I agree a sideswipe likely is the cause, however. The note above agrees to the note at NED. Could that note be the source of their comment? The note dates to 1963 so was likely known to Arp at the time he took his image. Could it also have influenced him to put it in the fission category? NED has nothing newer on the system which bothers me. Link to the note: http://ned.ipac.caltech.edu/cgi-bin/nph-datasearch?search_type=Note_id&objid=40559&objname=NGC%205917&img_stamp=YES&hconst=70.5&omegam=0.27&omegav=0.73&corr_z=1&of=table

When I first wrote this my monitor showed no sign of the bridge in my image nor any other including the ESO image below. Since then I\'ve changed my mind as I do see it now in my image as well as the ESO image. Apparently, I was distracted by the hook to the arm thinking it hooked back which it seems to have done but some stars continue up in a very faint connection.
http://www.eso.org/public/news/eso0622/

Color data in my image is very poor. The object is low in my skies and spring fog off the lake really tore up the color frames. I took the color data over three nights under very different seeing conditions. I took all three colors each night but fog ruined each color 2 of the three nights. Only the color I took first that particular night got through. Even then green was really clobbered. I used it but wonder if I should have tried a pseudo green made from the red and blue instead. I\'m so far behind in my image processing I didn\'t try it both ways.

The field is out of the Sloan Survey area but the VLT image is far better anyway. Still, I wish it covered the southern plume as well. Without Sloan data, only the \"big and bright\" galaxies in the field have distance data. I\'ve included an annotated image with the distances to these in billions of light years. Only 12 galaxies in my field are even cataloged at NED, 7 with redshift data. Pretty meager field. I\'m used to thousands in the field being cataloged. 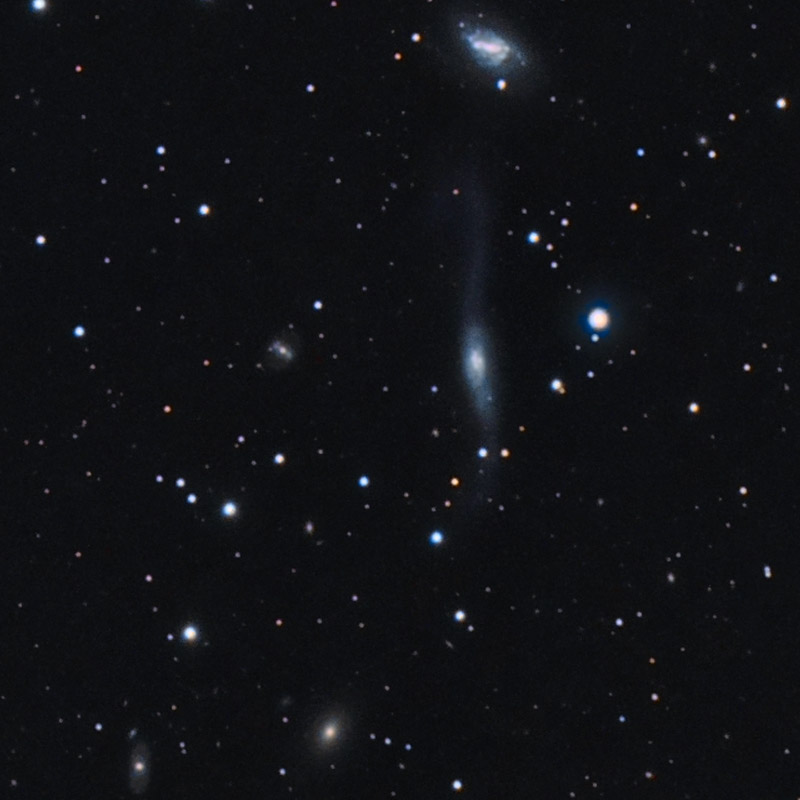 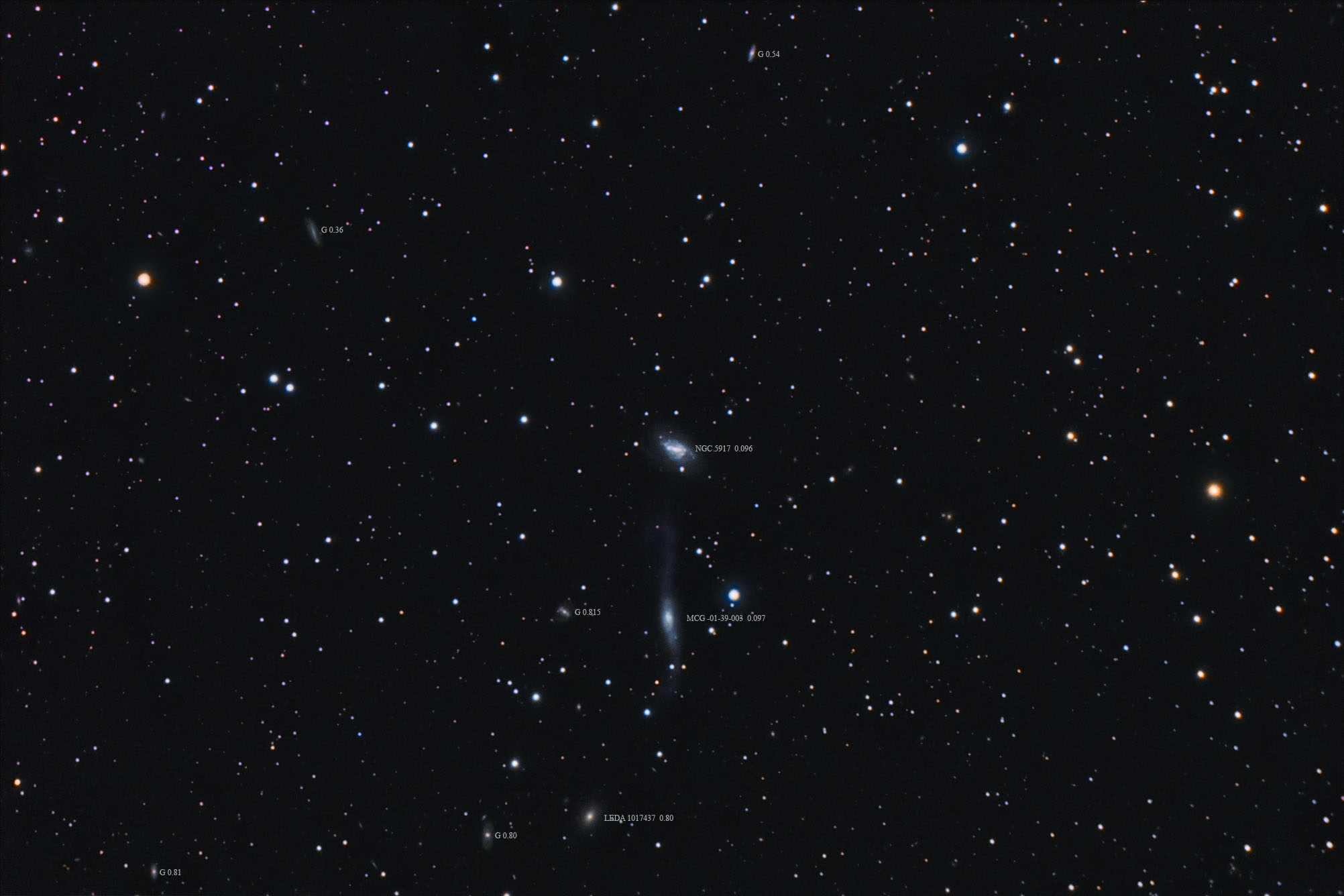 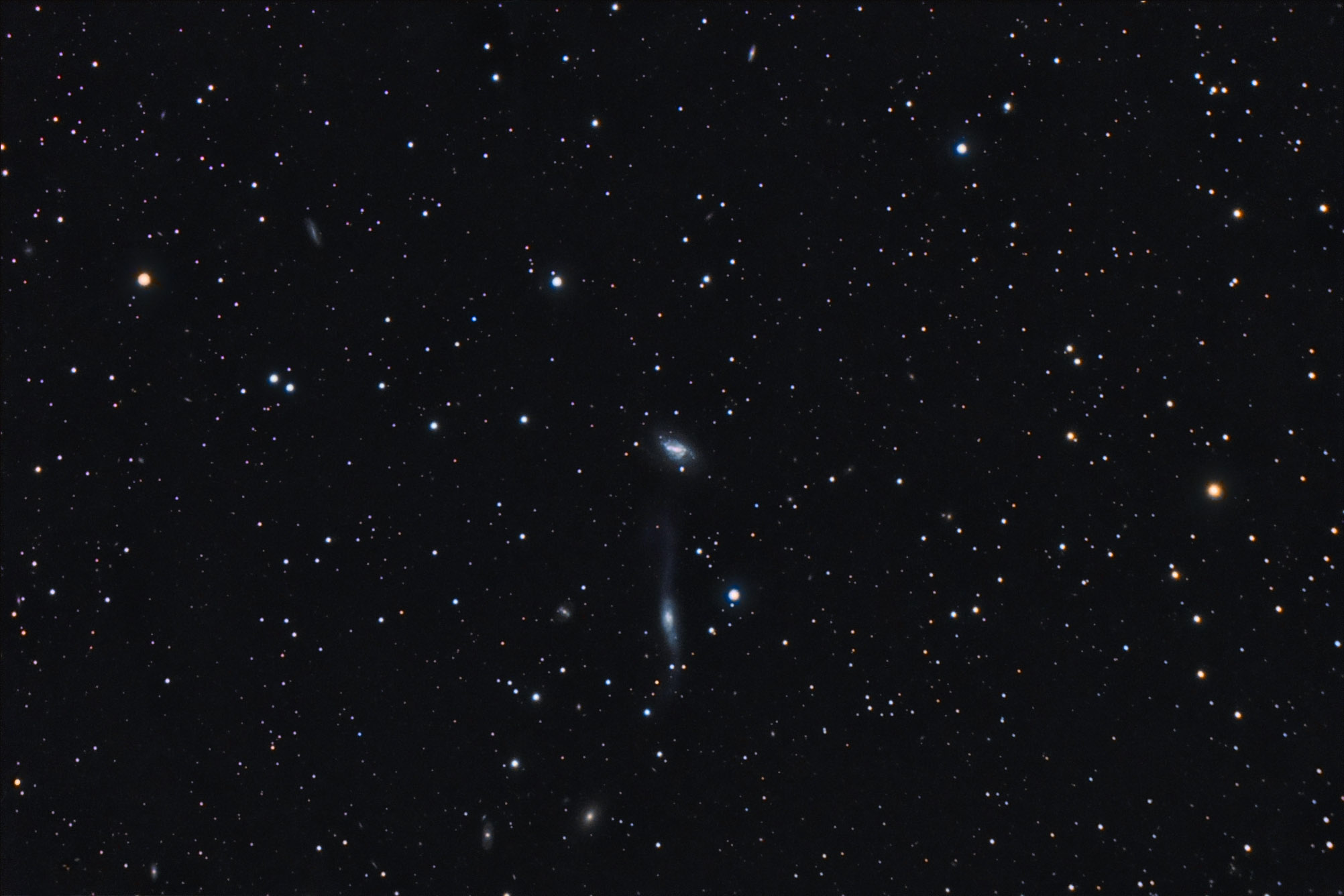