Arp 255 is another in his category Galaxies (not classifiable as S or E); Appearance of fission. In this case, it does look as if an arm broke off though that is likely only illusion. Even Arp considers it a separate galaxy but does believe the faint tidal arm to the north is really the continuation of an arm of the bigger galaxy as he notes: \"Faint arm extends beyond high surface brightness companion.\" The pair is otherwise known as UGC 05304. They show a red shift indicating a distance of about 565 million light-years. NED calls the smaller one a \"late spiral\" and the larger simply S? probably indicating there\'s no agreement as to what type of spiral it is rather than if it is a spiral as it is obviously one. Looks rather like SBc pec to my untrained eye. The arms are unusually red for a spiral except for a detached very blue segment that may be mostly massive star clusters but otherwise, show no visual hint of star formation due to the interaction. Though it may be hidden behind dust. There seems to be little on this pair. Down and to the right of the pair is CGCG 035-075 which has about the same redshift and is obviously part of the same galaxy group. Directly west past an orange star is a rather bright very blue \"star\". It is the quasar [HB89] 0950+080 at 9.3 billion light years. Directly below CGCG 035-075 is a large faint, nearly colorless smudge of a galaxy. It is LSBC D709-10, an irregular Magellan like galaxy about 150 million light-years distant.

The big galaxy to the left is UGC 05308. It appears highly distorted as well but it likely did not interact with Arp 255 as its redshift shows a distance of less than half the distance at 260 million light years. It too is classed S? by NED. I\'m surprised Arp didn\'t put it in his catalog as well. A couple of the small blobs in the upper part of it are listed by the SDSS as being separate galaxies with no redshift data. One is a short linear fuzzy patch in its NW merging with a star cluster in the arm. The other is the star-like blue object directly east of this feature. It\'s possible these are just parts of UGC 05308 rather than separate galaxies. Or they could be merging with it and the cause of the tidal distortion in the galaxy or they are far behind it. Without redshift data, I can\'t tell. Edit: Since the above was written the short linear fuzz patch has been given a distance of 540 million light-years using the Friend of a Friend method. The other blob has a redshift of 550 million light-years. Both are considered by NED to be part of the Arp 255 group.

I found several asteroid tracks in the image. I was perplexed though why one seemed fuzzy. When I ran an asteroid check on the image at the Minor Planet Center I got my answer. It is a newly discovered periodic comet (12/31/2008). I\'ve noted the 6 asteroids and the comet on the annotated version of the image. Magnitudes are estimates of the Minor Planet Center. Magnitude estimates of the comet toward the end of March 2009 when this image was taken vary by 2 magnitudes. The Minor Planet Center made no estimate so I didn\'t include one. You can judge somewhat by the other asteroids but remember a fuzzy object is a lot brighter than a point source like an asteroid and speed of motion dims the trail the faster it moves. The faintest asteroid at magnitude 21.1 is right at my limit for a moving object. I may not show on some monitors. Note that some of these estimates appear in error. With one listed at 20.0 appearing fainter than two estimated to be even fainter. An asteroid doesn\'t get a number until it has been followed around a complete orbit. This is why some have numbers and some don\'t.

Maybe I should title this image James Bond meets Arp 255. Well Ian Fleming anyway, yes that Ian Fleming. That\'s the brightest asteroid in the image! No space so it\'s Ianfleming on the annotated image. The naming citation reads: (91007) Ianfleming = 1998 BL30
Ian Lancaster Fleming (1908-1964) was a British writer and journalist. Fleming is best remembered for creating the character of British Secret Service agent James Bond (\"007\") and chronicling his adventures in twelve novels and nine short stories.

Limiting magnitude for this image is about 22.6, rather typical. The galaxies are in southern Leo southwest of Regulus almost to the Sextan\'s border. 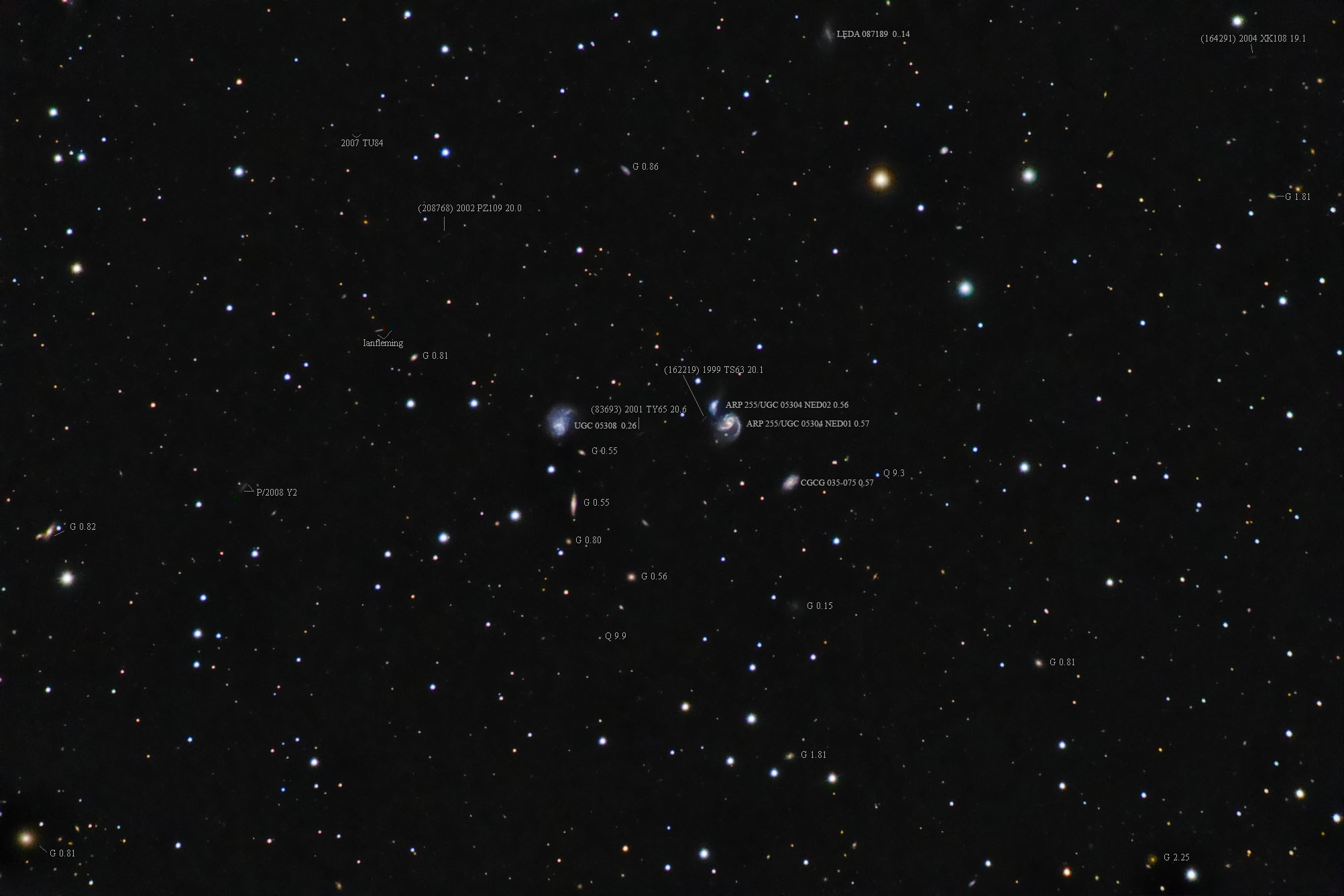 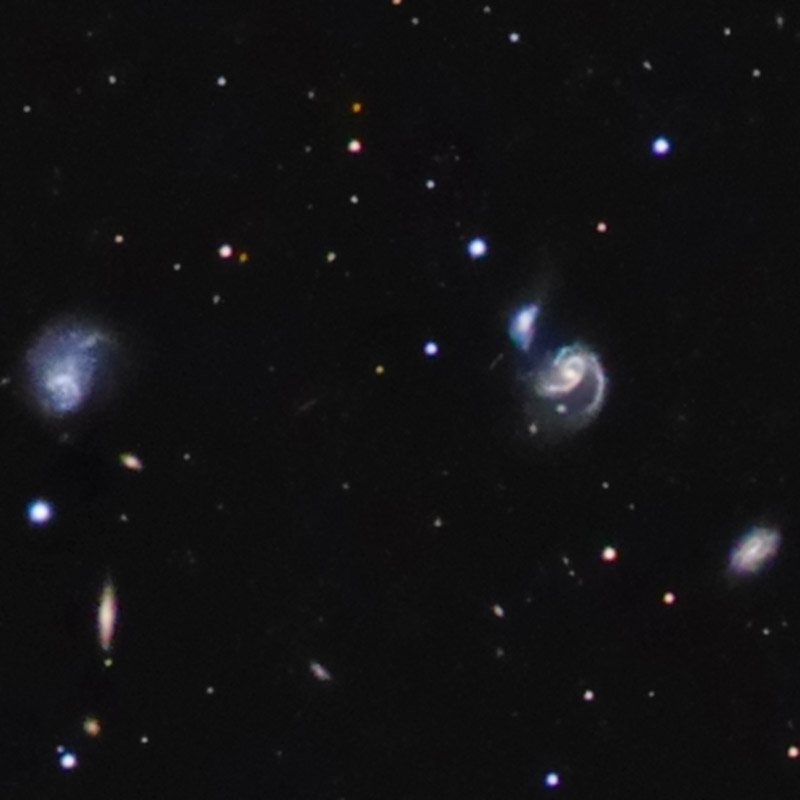 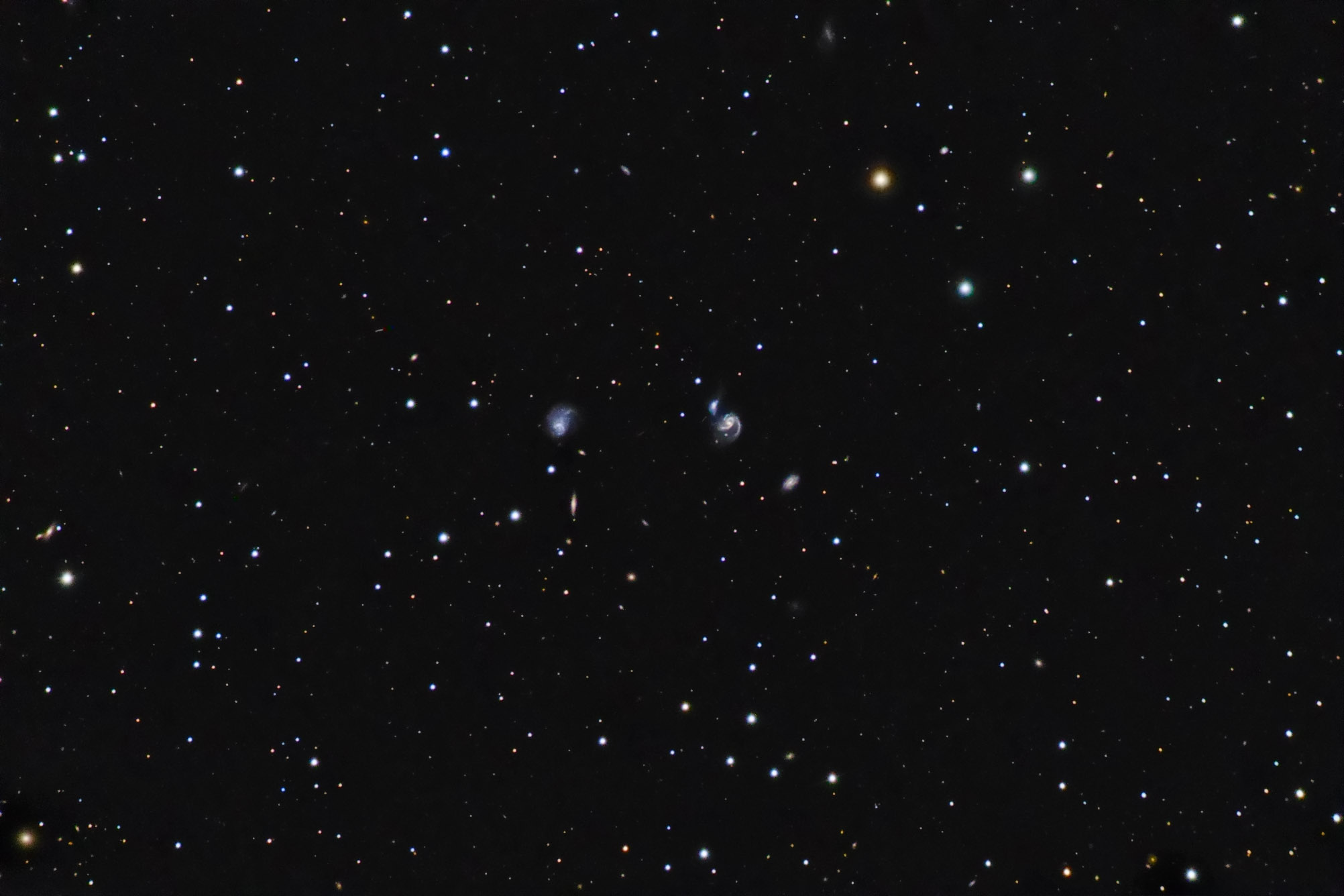